I recently shared my take on how we successfully spent two days in Symi (more like three days, actually), and one of the activities I recommended was a water-based tour to explore Symi by boat. We had looked at chartering a boat privately to go at our own pace – we did this (and loved it) when we went island hopping in the Adriatic during our time in Croatia – but we were too early in the season to have the luxury of choice. During the season there are water taxis readily available to pop around from the main harbour. We were about a week too early (most of the water taxis start service again in mid-May) so were a bit more limited with our options. 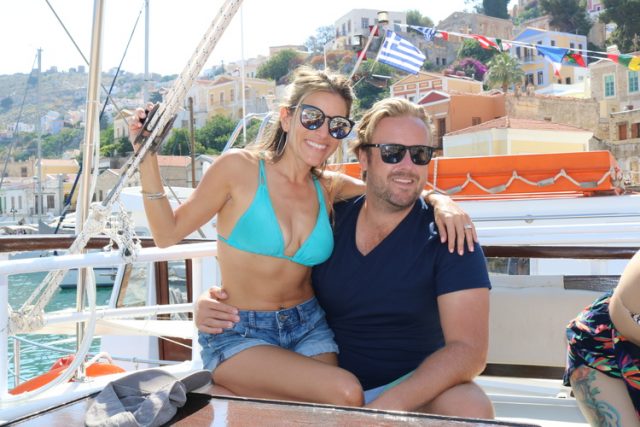 Circumstances forced our choice a bit, but we were fortunate to have the option of hopping aboard Poseidon, a boat that offers a beach hopping/round the island experience in Symi, complete with lunch on the tiny island of Sesklia. The boat is large, holding upwards of 70 people at max capacity, but it was about half full on the day we joined. At €40 per person, it’s an incredible value for a seven-hour round the island boat experience. While many places take card on the island, cash is still king in Greece, and we had to pay for our boat trip in cash. If you’re generally not inclined to carry much cash on you, there’s an ATM close to where the boat departs so you’ll be able to get cash in a pinch. The boat departs at 10:30AM so get there around 10:10AM if you want prime seating, especially if there’s more than two of you and especially if you’re going during high season. If you’re a sun bunny, head to the top deck where you’ll get fresh air plus plenty of sunshine during your cruise. For those that get seasick, I’ll help reassure you by saying that we never had an inkling of seasickness on our boat trip. My mom has been known to get a bit queasy on boats and she was totally fine the entire day. 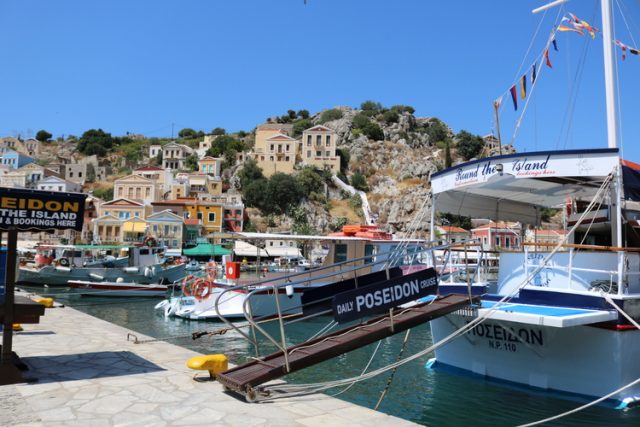 If you’re like me, you may be a bit wary of group experiences like this. The thought of a joint boat trip brought to mind cheesy days of exploration with sugary drinks and a kitschy offerings. What we had was something very different from that, though. The boat serves complimentary wine – red, white, or a local white wine – along with water and ouzo. They also have beer on board at a surcharge, and you can easily start a tab if you’d prefer to go the beer route. Armed with sunscreen and a beach towel each, we hopped aboard Poseidon for our day at sea exploring Symi by boat. 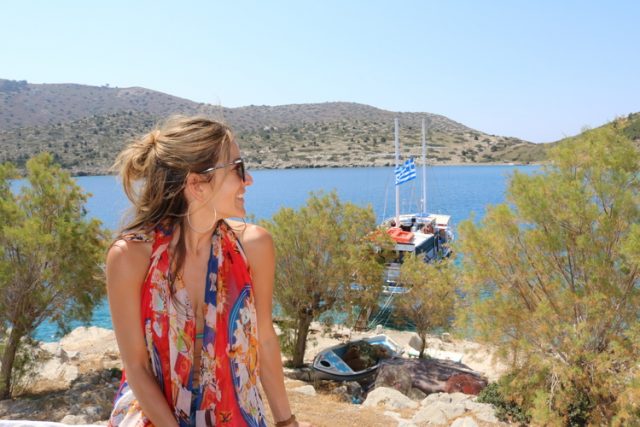 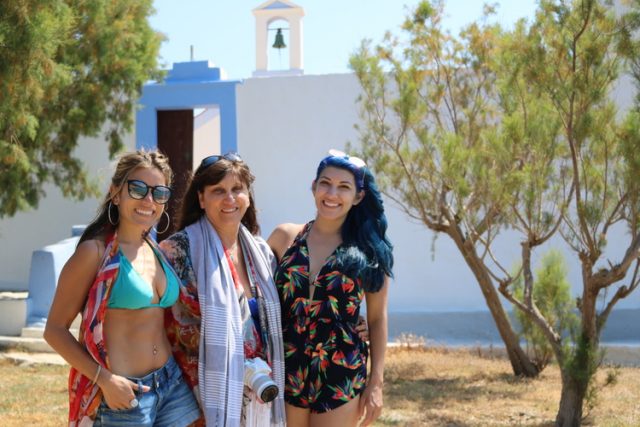 After exiting the candy-colored main harbour of Yialos, we headed out to sea on a clear, calm and sunny day. Our first stop was Agios Emilianos, home to a quaint monastery and beautiful clear seas. The water is cool in May since it still hasn’t had the chance to heat up from the summer sun, but if you’re the kind that’s inclined for a refreshing dip, the seas here are pretty inviting. I’d generally rather hang on the boat or explore on land and our first stop gave us the opportunity to do that. With the exception of lunch, most of our stops were around 30 minutes, enough to enjoy the destination without lingering too long. 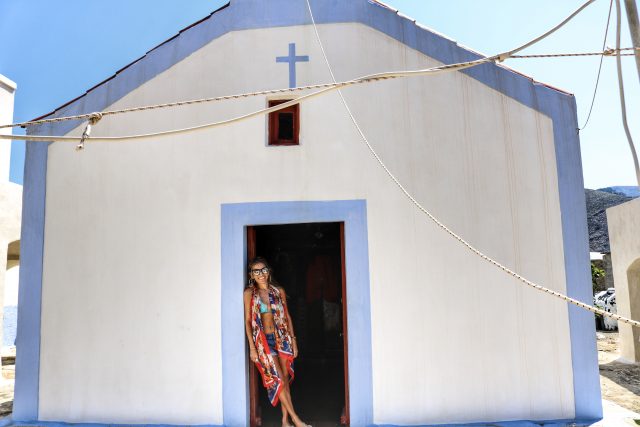 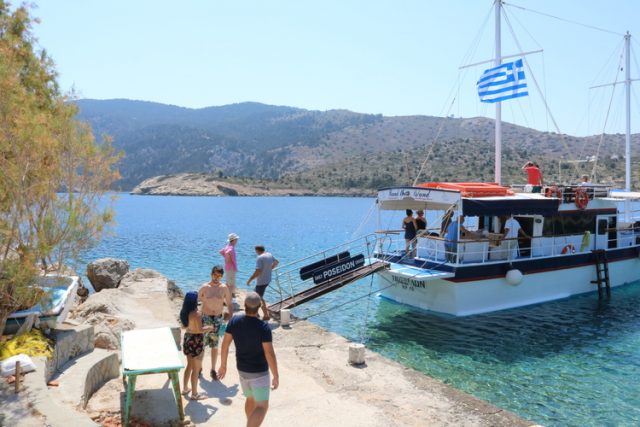 I’m always enamored with monasteries because they’re built in the most off-beat locations; the most iconic ones that we’ve seen have been nearly impossible to access (like Mar Saba in the West Bank, which still amazes me). From the outside, I would have wagered that Agios Emilianos was only accessible by boat, but frequent visitors to Symi assured us that you can actually hike there if you’re up for it. From Yialos, they estimated that a hike takes about three hours over the craggy mountainous terrain before you end up on this little spit of sand that gives way to the church. 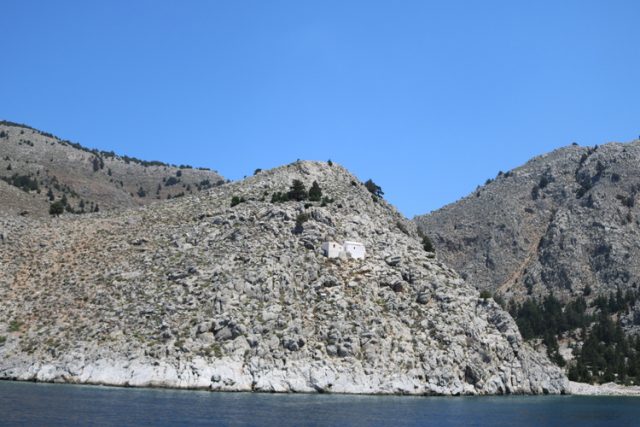 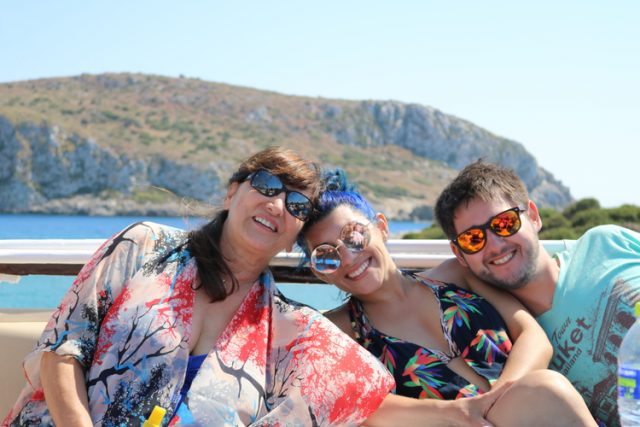 Speaking of craggy mountainous terrain: after saying goodbye to the beauty of Agios Emilianos, we headed along the coastline to Agios Vasilios, where another monastery was precariously perched on the cliff side. At closer glance, there’s actually a footpath that brings visitors to the monastery. The beach here was a long stretch with trees dotting the landscape and rocky terrain in lieu of sandy beaches. For many, it was a perfect opportunity to plunge from the upper deck of the boat into the crisp Aegean Sea. For me, it was the perfect opportunity to take a mini dip (long enough to appreciate the sun again), and grab a glass of Greek white wine to continue soaking up the sun upstairs. The boat trip was lovely because it was a mix of personalities and objectives. There were some folks who took every stop as an opportunity to jump into the sea and float from start to finish. Others took the time sipping wine in the sun and chatting, surrounded by new vistas at every turn. We happily did a bit of both.

In the early afternoon we stopped for a couple of hours on the island of Sesklia where we had a BBQ lunch, plus time to explore the beach and sea at leisure. The island is home to Simian goats which you’ll see running around the island freely, and you can wander the island to explore further afield. The beach where you’ll get dropped off is the main draw though, with some sandy patches that make taking a quick dip more enjoyable. 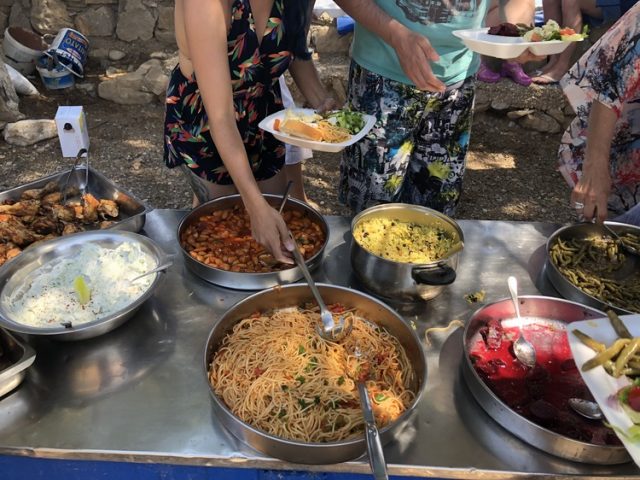 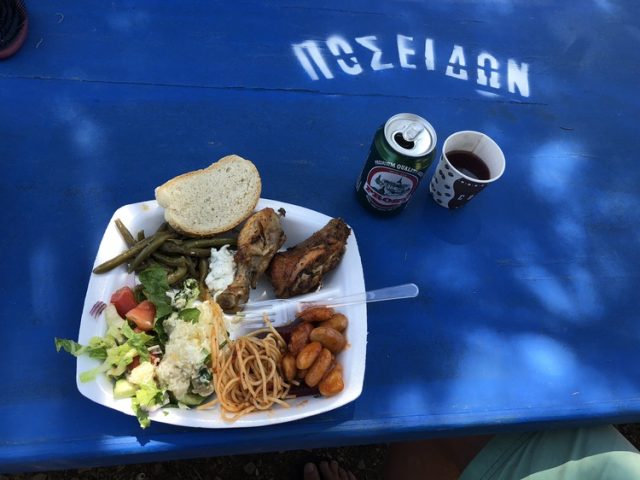 The team has picnic tables already set up overlooking the beach. Upon arrival they quickly wiped everything down and prepped it for us to spend the next couple of hours eating and lazing. We found a perfectly perched table for six situated under an olive tree, where we sipped wine and enjoyed the views in the lead up to lunch.

I said before that I’m always wary of trips like this, and temper my expectations, especially as far as food is concerned. These guys are knocking it out of the park though, and there’s a reason they continue to draw in repeat guests who love the experience. The food was plentiful, with heaping bowls of fresh veggies, rice, pasta, potato salad, bread, dips, and chicken. For the vegetarians in the bunch, don’t be concerned. The majority of the food available was veg-friendly and there was more than I could even sample during our lunch stop. Paired with white wine and ouzo, it was the perfect casual mid-day bite. 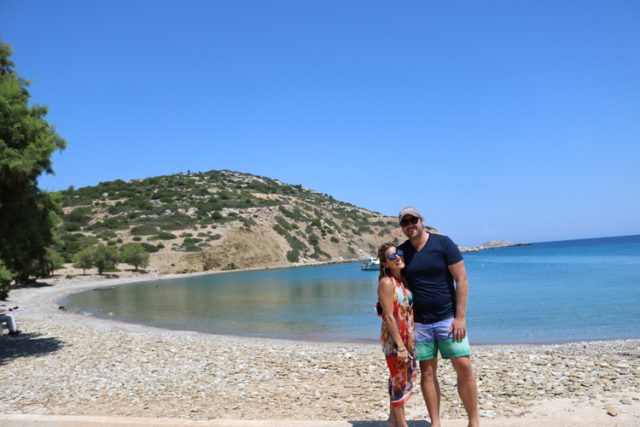 And those goats I mentioned? The captain and team generously poured our leftover food out for them to enjoy after we departed. ? 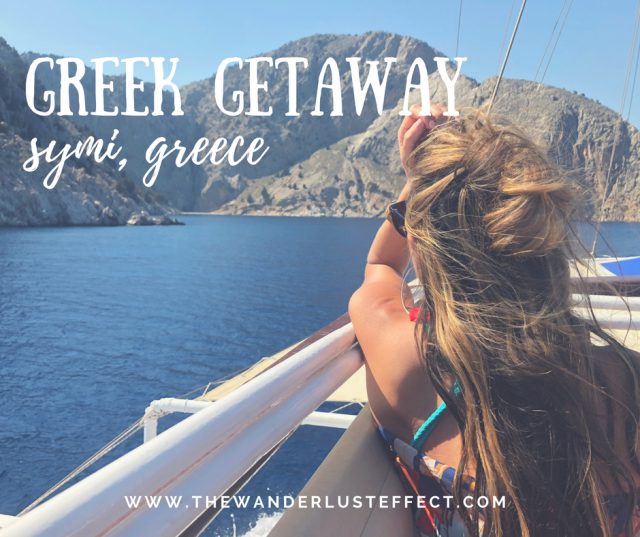 After a couple of hours enjoying lunch, we headed to our final stop before finishing up our day. Scott dubbed Agios Georgios the prettiest beach of the trip, and in terms of dramatic scenery, water clarity and beach color, it was hard to beat. It’s a smaller slice of sand and difficult to reach, but it’s one of the prettier stretches of beach that I’ve seen in Europe. After a sizable lunch, most folks spent the time floating in the Aegean before we headed back to Yialos to finish up our day.

Time truly does fly. Before we knew it, five o’clock had rolled around and we were sailing into the main harbour after seven hours at sea. I’ve talked about Symi’s harbour time and time again, and it’s truly a sight that never gets old. If you have more than one day on the island, taking the time to explore Symi by boat is a great way to get your bearings and see more of the island from the water. As island dwellers ourselves, it was a great reminder of how a day at sea is a highlight for so many, especially surrounded with your favorite people.

Anyone else been on a boat trip in Symi? What are your favorite places on the island?

7 Things to Do in Anegada