I’m sitting in the airport right now, eavesdropping on native Spanish-speakers in an attempt to make out their conversation. If only they could speak a little bit slower, I think I could actually understand most of it. Despite having some issues grasping the right words over the past three days, I’m actually impressed with the amount of Spanish that Lindsay and I recalled from our high school Spanish days. The thought of leaving Malaga in two short hours is so depressingly sad. The three days we spent in Marbella were necessarily relaxing. There are very few places that I have visited this year that I would say, with confidence, I would certainly visit again in the future. Costa del Sol is definitely one of them – pure, unadulterated relaxation, breathtaking views, gorgeous weather and a laid-back vibe that transported me back to California for a moment. Although we didn’t do much (our days primarily consisted of waking up, laying on the beach for hours, eating paella and drinking sangria), I can’t possibly recount the beauty of our three-day getaway in one blog post. So, we’ll start with Saturday: day one of our adventure.

We decided to book our flight for Saturday morning instead of Friday night so we could make use of the public transportation in Malaga; there’s always something a bit disconcerting about arriving in a foreign land late at night, unsure of where to go or with whom to speak. So, after waking up at 4:30AM and jumping on an early morning tube, we made it to the airport before 7AM for an 8AM flight.

Two and a half hours later, we landed in sunny Spain. Though there’s a bus that goes directly from Malaga to Marbella, the buses are few and far between, picking up at the airport once every two hours. Not wanting to waste our time at a bus stop in Spain, we found two travel partners to share a taxi: €70 total and a great investment; we were in Marbella an hour later, checked into our hotel and getting settled. 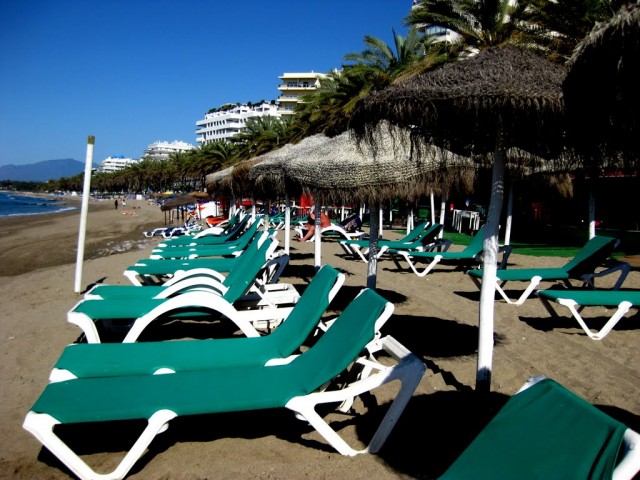 The view from our room wasn’t too shabby. In actuality, the ocean and palms were pretty refreshing. And our hotel, AparthotelPuertoAzul, was such a perfect fit for us: beach front, awesome staff, cute balconies, spacious bathrooms and a kitchenette (which sadly went unused). After unpacking, we headed down to the beachfront restaurants to grab a bite to eat at Ole, a little place with sun-laden outside seating, sangria and paella. After a long lunch, we took our newly purchased ‘Costa del Sol’ (read: ‘Hi I’m a tourist’) towels down to the sand to soak up some sunshine. Despite the fact that it was around early evening, the sun was in full force. We ended up staying out until around 8:00PM before heading back in to re-group and grab dinner in Old Town Marbella.

The Old Town was nearby, fifteen or so minutes from our hotel, and despite the fact that we didn’t even head out until 10:30P, the weather was still incredibly pleasant. We ended up in the Plaza de los Naranjos, a cute little part of town with some amazing restaurants and awesome outside seating. We had more paella and sangria, and some interesting conversations with the wait staff to finish off our night before heading home. Though I’d always heard that people in Spain start their nights late (late dinners, late clubbing, etc.), I never really understood how they had it in them to head out so late at night. After that first night, I totally understood. In the warm summer months, there’s light out until 10PM and the weather is too inviting to be inside. Even though the clock says 9:30PM it feels like 4PM and the weather’s too nice to not enjoy. Needless to say, I was hooked after day one. Day two brought a lot more of the same – you can read our second day in Marbella here!

Signing off from London,

Experiencing Anguilla: Which perspective is your favorite?

An Attempt at Chimp Trekking in Rwanda