I can’t recall if I mentioned this before, but I think it’s worth throwing out there for those of you looking to explore Europe: Before I arrived in England, I created a mental and physical list of places that I wanted to visit: Italy, Greece, Turkey… the list included a long prioritized string of places, some commonplace and some a bit more unique. Spain fell somewhere between the middle and bottom of my list. I’m not actually sure why my desire to see the country was so nonexistent (especially considering my desire to master foreign languages), but it just didn’t pique my interest quite as much as other places. After visiting, I can’t believe that it wasn’t at the top of my list. After being there for just a short period of time, I know that I want to go back and explore some of the other amazing cities that Spain has to offer: Barcelona, Madrid, San Sebastian, Tarifa, Granada.

Needless to say, Marbella was a huge success. You read about our incredible first day in Marbella yesterday. Well, day two was a lot more of the same. After waking up mid-morning, we spent Sunday at the beach, lounging on beach chairs in front of a string of darling restaurants, cafes and heladerias. Armed with Paulo Coelho’s The Alchemist, a liter of water and suntan lotion, I was ready for a day of pure relaxation. A friend of mine recommended The Alchemist to me after hearing about my new-found desire to go to Egypt plus my impending trip to Andalucia. For anyone that’s read the book, it couldn’t have been more fitting, right? A kid from Andalusia (Tarifa) who searches for his Personal Legend in Egypt? Needless to say, it made for a nice Sunday read; easy and enlightening. Plus, now I can check it off of the ‘books everyone in the world has read’ list (also on that list: Angels & Demons, The DaVinci Code, The Great Gatsby, To Kill A Mockingbird and Catcher in the Rye). After hours of doing nothing on the beach, we noshed on our go-to meal for the trip: avocado salad with prawns. In the three days we spent there, our entire diet was comprised of paella, avocado with prawns, sangria and ice cream.

Every. Single. Meal. Though you think that’d get old, it totally didn’t. Different restaurants, but the same order: seafood paella. When in Spain, right?

After cooling off in the sea, roasting in the sun and taking a break for ice cream, we wrapped it up at around 7:30 or so and headed back to the hotel to clean up. We decided to take an alternate route to the Old Town and ended up eating at another restaurant in la Plaza de los Naranjos. More paella, more sangria (white sangria this time, which I’ve decided doesn’t live up to the greatness of regular sangria) and a Spanish tortilla. After a long dinner and a long night of chatting, we headed back to the hotel, slightly intoxicated and 100% happy. 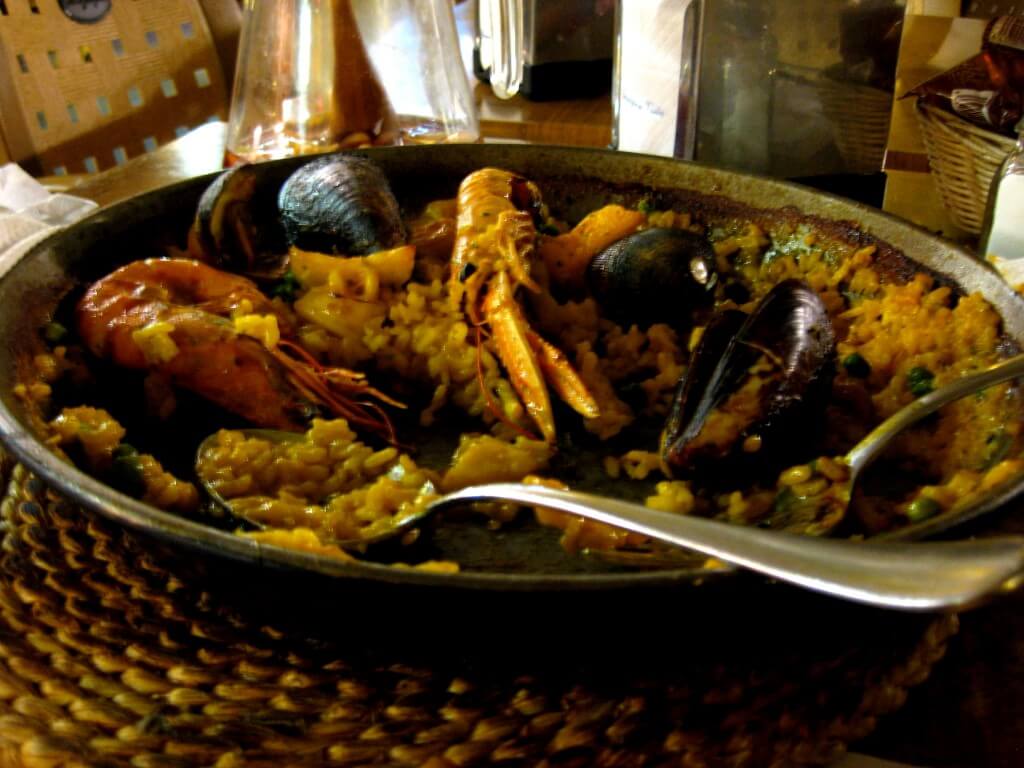 After our second night of paella, the consensus was that Restaurant Ole, the first restaurant we had visited for lunch, had the best paella we’d tasted in Marbella, although each restaurant had their own spin on it. It was also the most affordable. Most of the paella runs €13 – 18 per person and Restaurant Ole falls on the lower end of that spectrum. We did the seafood versions since we’re both non-meat eaters, but I’m sure the meaty version is equally delicious if you’re into that. After an incredibly relaxing second day, I went to bed so content (albeit a bit sunburned) and slept so, so well. Living the dream.

The ash cloud situation was brought to our attention on Sunday: airports were closing in Ireland and the North of England so we were conscious of the fact that we may be stranded in Spain. Though we both have stuff going on with school right now, the prospect of being ‘stranded’ in Spain didn’t sound too awful. While we weren’t stranded we had fun tossing around ideas of heading to Tangier, Sevilla or San Sebastian for a few days in the case that we were stuck on the mainland. I can’t lie – now that I’m back in the UK, a part of me wishes the ash cloud would have found it’s way over London. On the bright side, it’s supposed to be 73 and sunny this weekend in London. I’m prepping my Costa del Sol towel, sunglasses and shorts for sunbathing in Hyde Park if this miracle comes to pass.

Sermon on the Mount + Sailing the Sea of Galilee

Prioritizing Travel in Your 20s & 30s