What’s the difference and which is right for you?

If you’re Seychelles bound, looking for a luxury stay in the world-renowned archipelago, there’s no doubt that Four Seasons has made it into your pool for consideration. Rightly so! FS has two of the top resorts in the Seychelles and is often considered the premier property in Mahé for luxury travelers. In addition to its flagship Mahé location, Four Seasons also has their exclusive resort on Desroches island. The Seychelles are made up of 115 islands but there are only a handful that typically make it into consideration for guest stays: the main island of Mahé where the international airport is located, Praslin, La Digue, Felicité, Zil Payson, North Island, Denis Island, and Desroches. On many of the tiny islands, one premier luxury property acts as the island’s anchor.

Four Seasons Seychelles Mahé vs. Desroches – Getting There 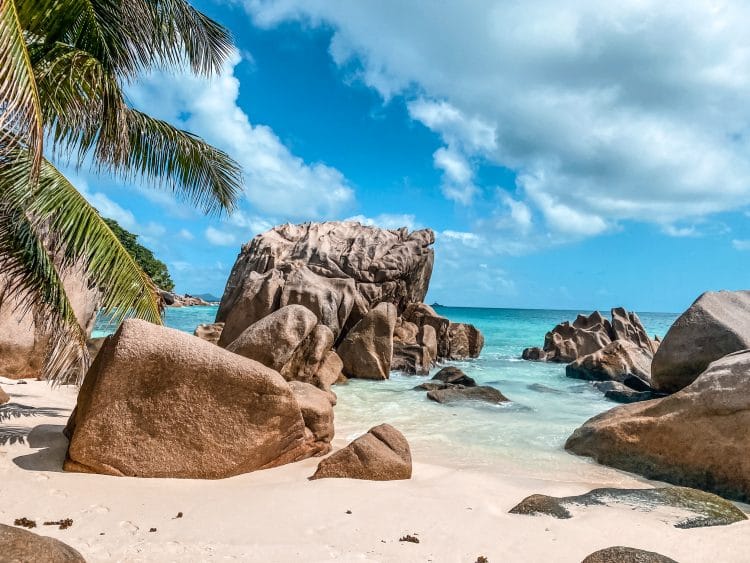 Four Seasons Seychelles is on the main island of Mahé where the islands’ international airport is located. For travelers, this means super easy access and an easy transfer after arrival, which is a plus. It also means it’s less of a ‘desert island’ feel generally given it’s the main transit point for travelers to the Seychelles so doesn’t feel as off-the-beaten-path as an island one step removed. By contrast, Four Seasson Desroches, set on Desroches island,is about 40 minutes’ flight from Mahé and accessible by a small plane which transits three times per week ($400 R/T per person). Desroches takes effort which means it’s filtered out a lot of travelers by the time you’ve reached the island, and the entire vibe there is castaway chic.

If time is limited or if you’d prefer to avoid intra-island connections, stay on Mahé where you’ll only need a quick car transfer after arrival. International flights are available into the Seychelles from Addis, Doha, Dubai, and other international hubs which makes it fairly easily accessible. It’s also the perfect add-on post-safari (talk to me if safaris are on your list so we can plan!). We chose to combine the two islands which is also a popular option. If you have one week, consider 3 nights Desroches + 4 nights Mahé or vice versa, to experience both.

The Properties, Sizes and Positioning 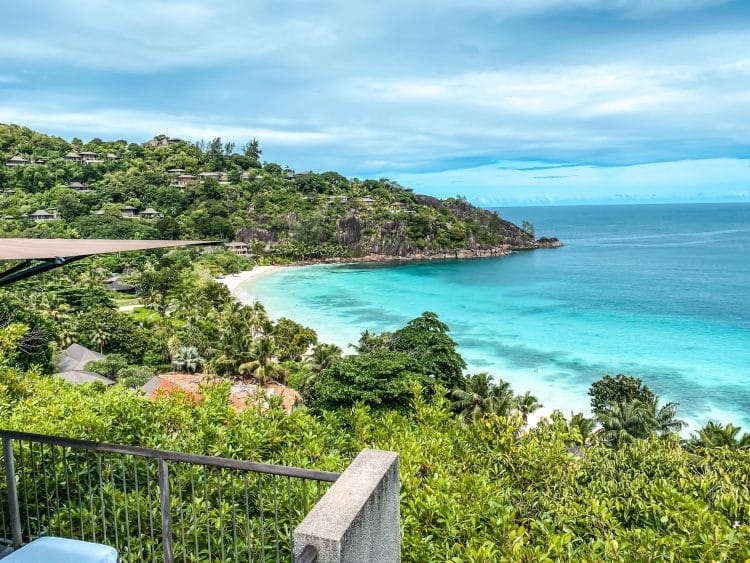 Part of choosing which resort appeals most to you is understanding the property layouts and setups as well.

Four Seasons Seychelles on Mahé is made up of around 60 rooms, with a number of restaurants and a spa on site. You’ll get around by golf carts which are available with a quick call or by WhatsApp with the front desk team. The design is thoughtful; spread out over a vast area and carefully tucked in to be part of the natural surroundings. Each villa feels private and lush; some offer stunning ocean views while others are surrounded by lush gardens.

The rooms here are beautifully appointed and feel island-y yet classic which is a contrast to the feel at Desroches (more below). Villas here have outdoor showers, private plunge pools, and nice decks for enjoying the vistas. 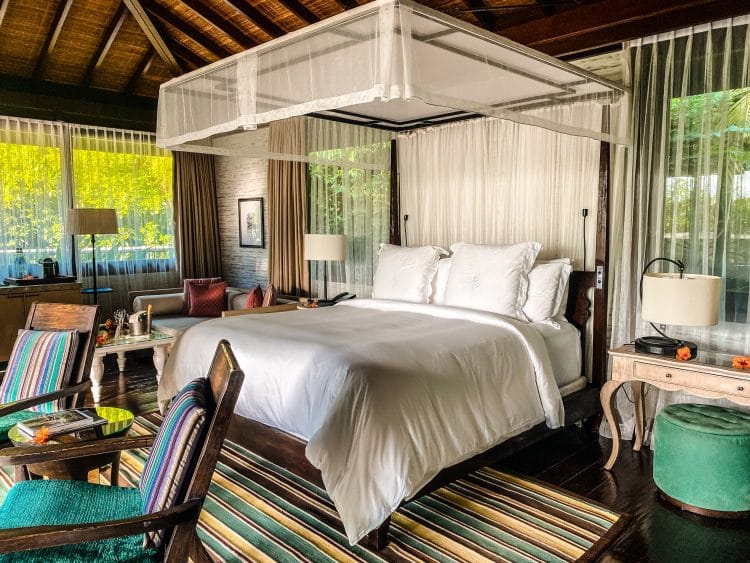 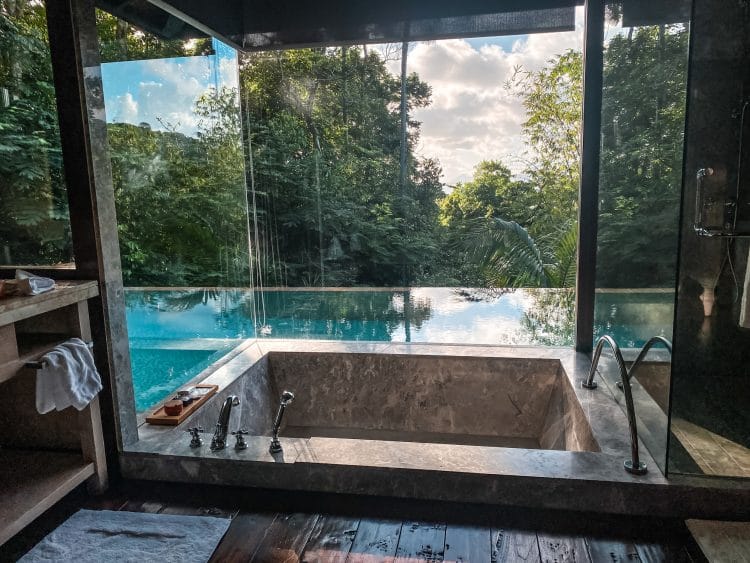 Four Seasons Desroches is a similar size with around 60 rooms, but the layout and design are completely different. The villas at Four Seasons Desroches are spread out substantially creating a little community on a private island. Each villa is equipped with two bikes to get around, and golf carts are available for those that are bike averse. Desroches surprised me though. I expected a small island where Four Seasons was the sole activity. What we found was a fairly large island; the resort covers around 25 – 30% of the island but guests can explore further afield to other beaches accessible by bike or golf cart. The vibe here is entirely different with a ‘Castaway Center’ and an aesthetic that is stunningly and thoughtfully desert island chic. 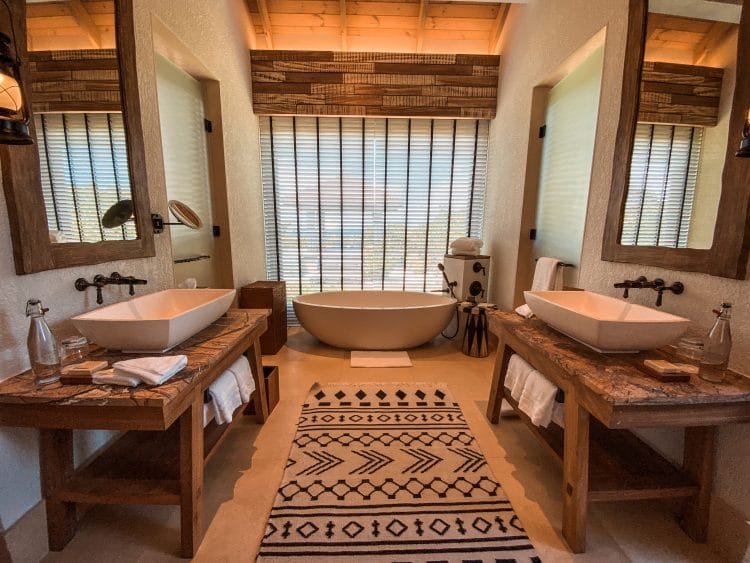 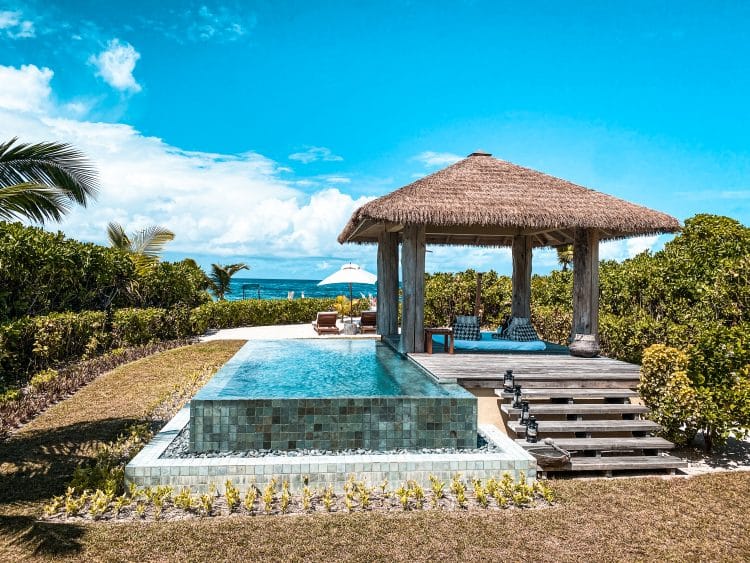 Each villa has a private pool with sunbeds, indoor and outdoor showers and bathtubs. Both properties offer multiple restaurants and spa services. 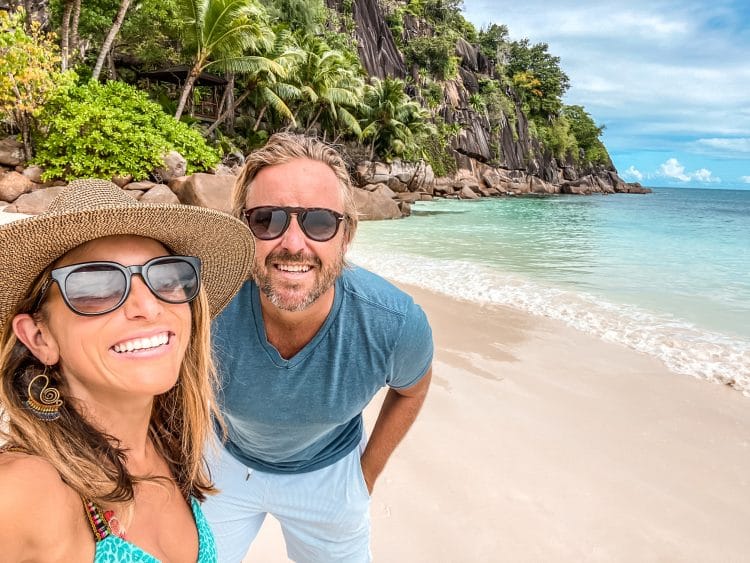 Four Seasons Mahé offers a water sports center right off the beach, and if you can pull yourself away from this stunning stretch you can head out on kayaks, go for a snorkel or a sail. They also offer a yoga pavilion and gym with personal training.

Four Seasons Desroches feels more barefoot in a way, embracing that castaway vibe I mentioned earlier. Their ‘Castaway Center’ is their water sports hub where you can get snorkeling equipment, schedule a dive if you’re PADI certified, or hire a boat for private charter. 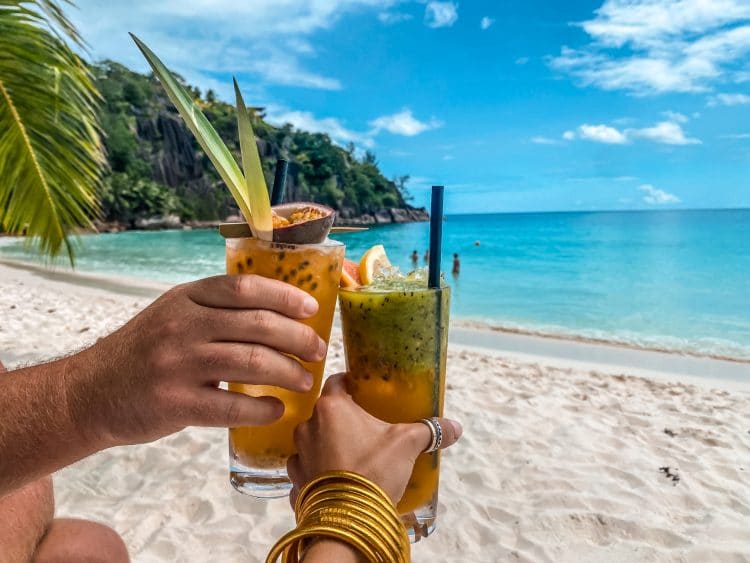 Next up, you’re in the Seychelles so obviously beaches are an important conversation! The Seychelles have earned their place amongst the most beloved island escapes for a reason and their beaches are truly next-level, on par with what we’ve come to love in Anguilla: white powdery sands sans crowds. That said, no two beaches are the same and not all are created equal. And let’s be honest: Four Seasons Seychelles in Mahé has one of the best beaches on earth.

Mahé surprised me. I expected to be stunned by La Digue and Praslin, and while La Digue did wow me with it’s boulder-laden beaches and iconic beauty, FS Seychelles’ beach is spectacular in every sense. Soft, super-white sand with calm and shallow seas. It’s a beach that’s family-friendly given it’s shallowness and ease of entry.

By contrast, Desroches’ beaches weren’t quite as much of a wow which really surprised me. That’s not to say they weren’t still great, but we found the beaches a bit more rocky and wild and the best beaches, in general, weren’t at the main property but instead further down the island. Desroches is flat compared with the other islands we visited which means getting around by bike is doable for most people. 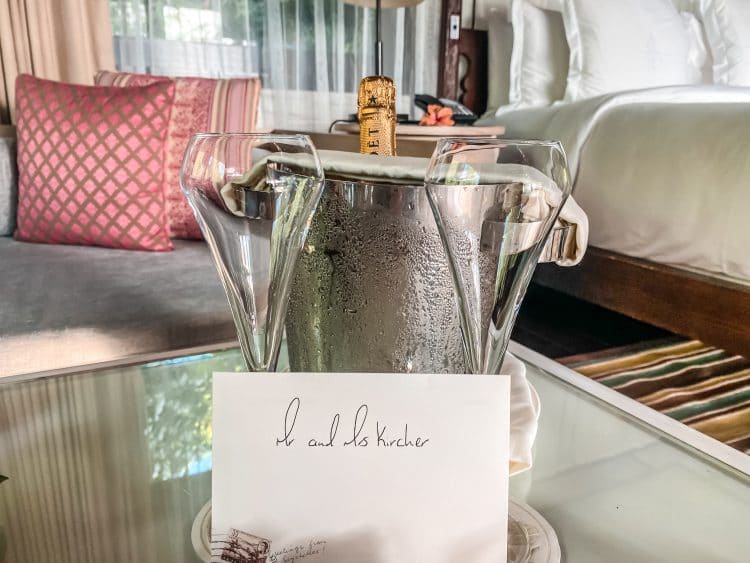 FS Seychelles Mahé has ZEZ Bar, a beautiful bar with live music multiple times per week. This was an absolute highlight for us — we enjoyed having pre-dinner drinks (mocktails for me!) before going for dinner. Nearby is ZEZ restaurant which is an Asian tapas-style concept that was hands-down our favorite meal on the trip. They also offer more casual dining, a creole night, and other offerings but ZEZ was a standout. Sadly we missed the sushi restaurant due to our schedule.

FS Desroches also offers multiple outlets, notably The Lighthouse, The Deli, and Claudine, where breakfast is served in the mornings. We enjoyed Claudine for lunch and dinner – service was wonderful as well – and the Lighthouse was thoughtfully done though I found the food a bit less of a wow here, which could have been bad ordering on my part.

Not a surprise here, but worth noting is that food is very expensive in general, and that’s true at both properties. It’s not a shocker given the difficulties of importing items but it’s worth bearing in mind that eating out will generally set you back a few hundred dollars each night. Cocktails are pricey but rather in line with what you’d expect ($16- $19 each) though wine is notably expensive (duties on wine are over 100% in Seychelles so you can’t fault the properties). I was very impressed with our somm at ZEZ, a Zimbwawean import who was wonderful with offering pairings. While I was on the mocktail train for this trip and had to turn down the vino, it was still nice to see an extensive and thoughtful wine list here. Cocktails at both properties were great and creative — don’t miss the smoked coconut old-fashioned!

Other Things to Consider 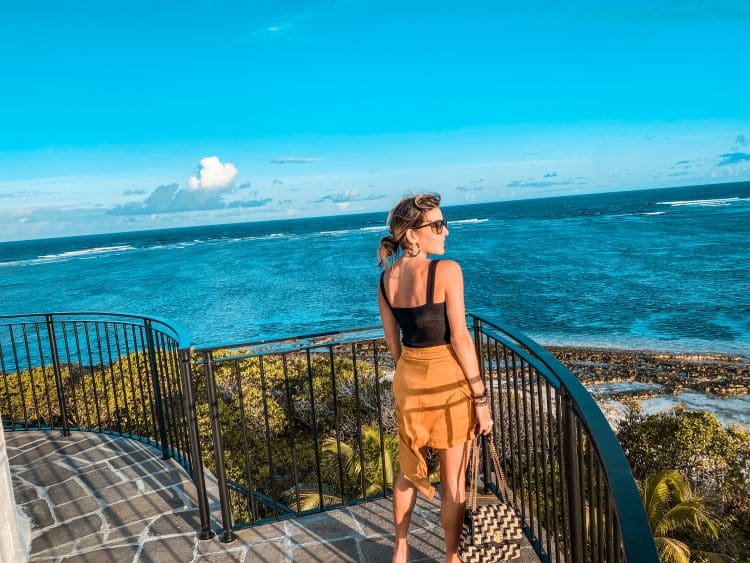 Firstly, the biggest difference is the overall vibe. I’ve alluded to it above but Desroches’ castaway feel felt freeing. Unlike in Mahé where you’re more or less staying at the property (unless you have a car or hire a taxi), in Desroches you’re free to hit the road and explore. We felt like kids biking around in the balmy coconut-scented night air. It truly felt like an off-the-grid private island and like we had run of the place.

One other element that’s notable is common spaces and community. FS Seychelles drew in many guests to their main beach and to the pool (less so to the pool given the beach is so world-class). At Desroches, it felt a bit more private. People tended to hang at their private villas vs. spending time at the public pool which is right near the restaurant. Perhaps it’s because the beach here isn’t as jaw-dropping as FS Seychelles, but we rarely saw a congregation of people in any given place; guests seemed to keep to themselves a bit more here.

Price-wise, the properties come in at similar price points so that’s not generally a factor I’d weigh too heavily though the airfare ($400pp R/T) is worth factoring in.

For those who need to work while traveling, note that WiFi at FS Seychelles in Mahé is substantially better than Desroches given Desroches is off the grid. Expect very slow WiFi in Desroches when you’re able to acess it. This could be a pro for people who really want to disconnect!

In terms of family-friendliness, I’d say both are equally family-friendly though Mahé may have an edge. Mahé’s beach was the hands-down winner and would be easy to enjoy with a little one. The villas’ private nature also make it so you can comfortably retreat without worrying about bothering neighbors. Desroches’ villas were also family-friendly and the bikes were a fun addition that would be great with kids old enough to enjoy. For little ones (8 and under), I’d suggest FS Seychelles on Mahé, while for slightly older kids, the island vibe of Desroches could be a great fit.

Overall, if I could pick solely one property between Four Seasons Seychelles Mahé and Desroches, I’d probably choose FS Seychelles on Mahé. That said, I’d highly recommend doing both to have the contrasting experiences to enjoy and to figure out which vibe you’re personally more inclined for. For me, Mahé’s ease is a bonus, and I found their beach and restaurants to have the upper hand. That said, there’s a special quality about Desroches that’s hard to describe; it’s more of a feeling of being somewhere exclusive and off-the-grid which feels a bit more liberating in a way. Four days Mahé + three days Desroches is a perfect taster to try both. If possible, try to return to Mahé with at least one night to spare on the backend. Flights travel 3x per week to Desroches but high winds can derail flight plans and potentially put a wrench in your international connections.

If you’ve been to both properties, which do you prefer?

5 Places to Watch the Sunset in Santorini