Journey Into the Kalinzu Forest: Chimp Tracking in Uganda

After our first fruitless attempt at chimp tracking in Rwanda, I honestly debated whether or not we should dedicate a morning to chimp tracking in Uganda. We had spent nine hours trekking deep into Rwanda’s Nyungwe Forest with no success but were fairly confident that Uganda would be better to us.

By comparison, Uganda deals with habituated chimp families vs. the unhabituated chimps that we were searching for in Rwanda, which means the gorilla families are far more familiar with human presence. While Kibale is the premier destination for those wanting to go chimp tracking in Uganda (there are many chimps and many habituated families there), the Kalinzu Forest is another popular destination and was our focus since we were based in Queen Elizabeth National Park. From Kasenyi Safari Camp, our drive was about an hour south towards the Kalinzu Forest where we would set out on our final chimp trek in Africa. 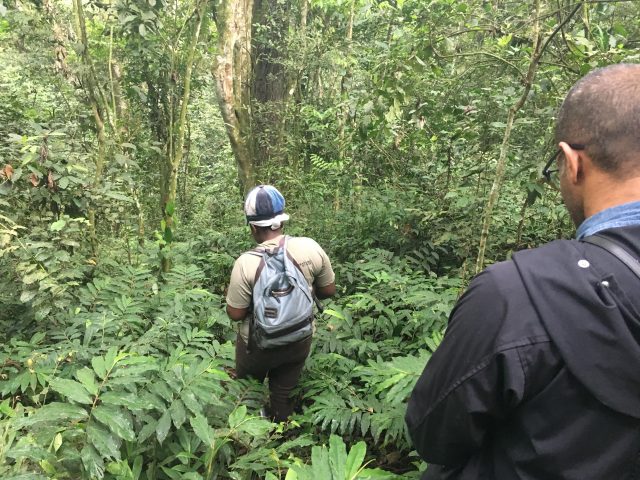 It was just us and one other trekker and we headed out with Debbie, a female guide who would lead us through the forest in search for chimps. We had heard from other guests about their magical chimp experience in Uganda, watching a family interact for upwards of 40 minutes while they looked on. I kept that in mind as we set out on our active morning.

From the get go, we were trekking, deep into the Kalinzu Forest through thick vegetation and dense jungle. Unlike our experience gorilla trekking in Rwanda, Debbie wasn’t clearing the path with a machete so we were dodging, ducking and pushing our way through thick branches, damp dirt and leaves. I had mentally anticipated this being easier.

They’re habituated here, they told us. You’ll definitely see chimps, they told us. It’s much easier in Uganda than in Rwanda. As our trek hit the one hour mark, I was covered In burs and plant particles while trying to ascertain what Debbie was looking for as guidance. We could hear the chimps for a few moments and knew we were in the right vicinity but we still hadn’t spotted them. On we continued up steep terrain, grabbing on to tree branches and strong vines to help pull ourselves up, step by step.

Neither of us said anything, but I could tell both Scott and I were concerned that we were going to meet the same fate as our first chimp tracking experience.

Debbie explained that it’s normally much easier to see chimps but that the rain the night before had affected their behaviors a bit. I was frustrated. I just want to see a chimp, is that so much to ask?! I’ve been trekking for the equivalent of a day, have ants under my shirt crawling around and biting at will, and all I want is to see a chimp’s face, just for a few minutes so this entire day isn’t for not. That’s fair, right?

We continued on, with a total hiking time of about two hours before we spotted a chimp. The tracker had pointed us in the right direction and we finally saw one in a tree for a few moments, enough time for me to capture a photo and see his face with my zoom lens before he quickly scurried away (I couldn’t really see any details without a zoom). We saw another on the ground nearby shortly after. About a half hour later, we came across a mother and baby in a tree, which was a highlight even though they were tough to see. We watched the mom clean the baby, a tiny chimp that couldn’t have been more than a month old. Despite only getting to see them for a few minutes (a few minutes of scurrying around to glimpse their faces), Debbie did mention that babies are a rarity to see so we were lucky for that brief encounter. 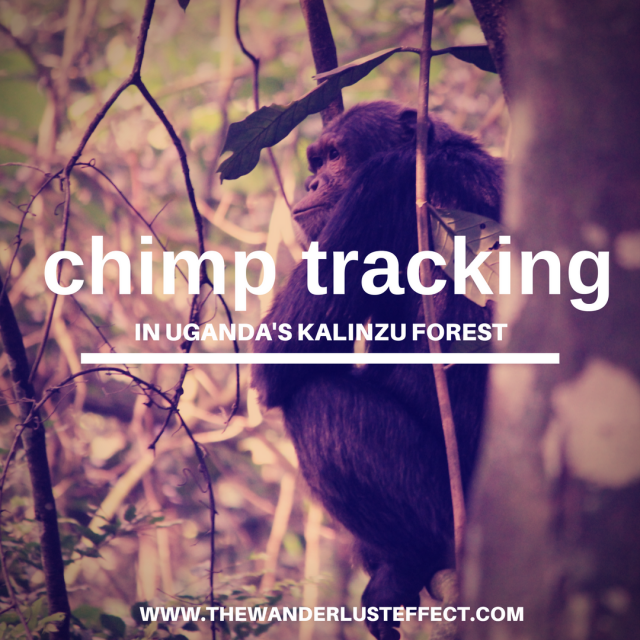 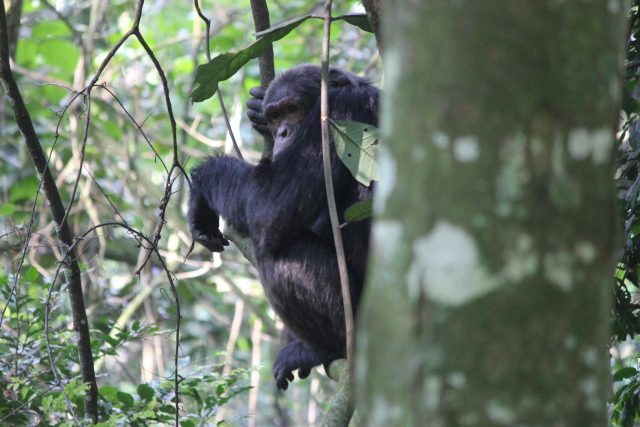 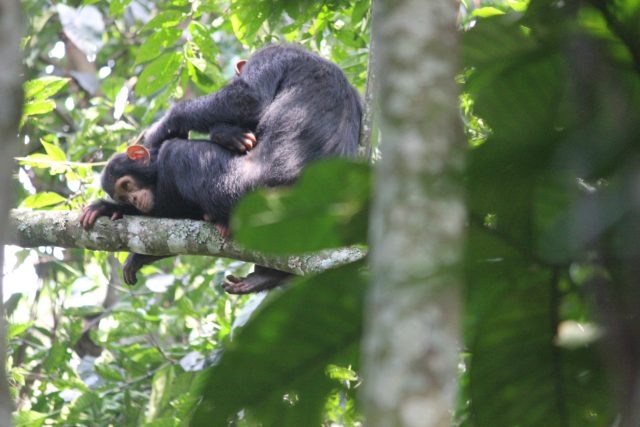 We tried to continue but collectively decided that we were happy with what we’d seen. To be totally honest, it wasn’t what I had expected from the encounter but there’s only so much you have control over where nature’s concerned. One of the realities with any wildlife experience is that there are no guarantees, which we found out first-hand during our chimp tracking on both accounts. While many people talked about how brilliant their experiences were, ours had us questioning whether we could have better used our time doing something else. That being said, I’m sure I’d be singing a different tune if we’d had one of those magical chimp family encounters. The best way to approach any trekking expedition is to go in hoping for the best but managing expectations. If you do have a great encounter, then you can count yourself amongst the lucky ones. If your encounter is less than perfect like ours was, we allowed ourselves to be a bit disappointed but also reminded ourselves of how grateful we were to be there in the first place. Not everyone has the opportunity to even attempt to trek in Africa so to have that ability in the first place is special. Plus, it counts towards your recommended 150 minutes per week of cardio, right?

We had the opportunity to go out for another afternoon adventure but after days of early morning wake up calls and scheduled activities we opted for an afternoon of relaxing at the lodge, unplugged from the internet and the world in a refreshing change of pace. You know what? It was a pretty ideal way to unwind for our final evening in Queen Elizabeth National Park.

If you’re in QENP looking for other activities during your stay, check out the hot air balloon safaris followed by bush breakfast on offer. If I had known more about this in advance, it’s something I may have booked (much to Scott’s chagrin). Also, if you’ve had your fill of successful game drives, you can also head out on a tour of the craters that dot Queen Elizabeth National Park for a unique experience in Western Uganda.

Have you been chimp tracking in Uganda? Was your luck better than ours?