Jerusalem is one of the most fascinating cities that I’ve visited. It’s a city of immense duality: ultra Orthodox Jews live alongside of an uberhip Jerusalemite crowd. Amidst a sea of kosher restaurants and falafel shops, there are swanky wine bars and bigger-than-life restaurants doling out Israeli wines and local microbrews.

Then there’s the Old City with its immensely layered history, religious and cultural draws. It’s a different world entirely, a place that simply cannot be compared to another city on earth. We spent a few days discovering what the Old City offered (the spices! the tea! the olive wood! the fresh-squeezed pomegranate juice!), but we spent our first day focused on the most critical Biblical sites strung along the Via Dolorosa. 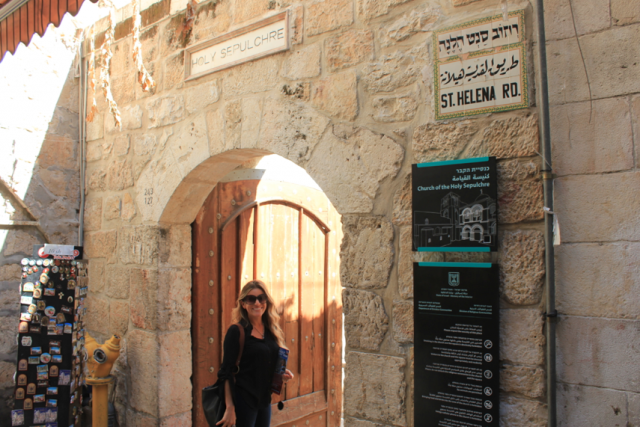 The Via Dolorosa, also called the Way of Sorrows, is an alley within the Old City that houses the Stations of the Cross, marking key places in Jesus’ journey towards crucifixion: from his being condemned to his burial site. The stations are actually quite humbly marked for the most part and if you’re not paying attention you can easily miss them altogether. We visited the stations backwards, starting at the Church of the Holy Sepulchre (we knew it was a must) and leisurely working our way to the first station, stopping at markets along the way. You’ll be able to buy a simple pamphlet/guide for about 5 shekels to help direct and inform you if you’re doing a self-guided tour. Below you’ll see a quick overview of the stations along with some photos from our journey:

Jesus is condemned to death + carries his cross 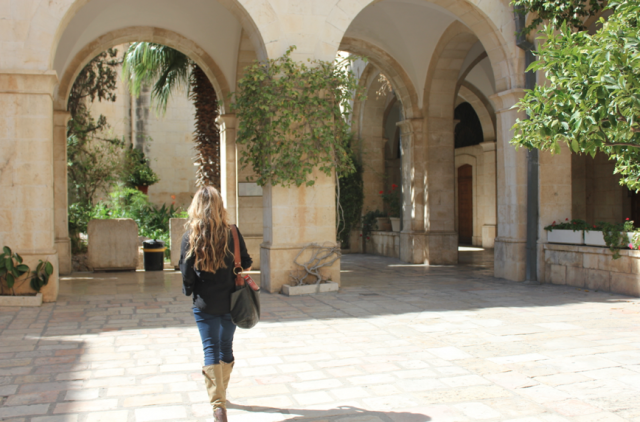 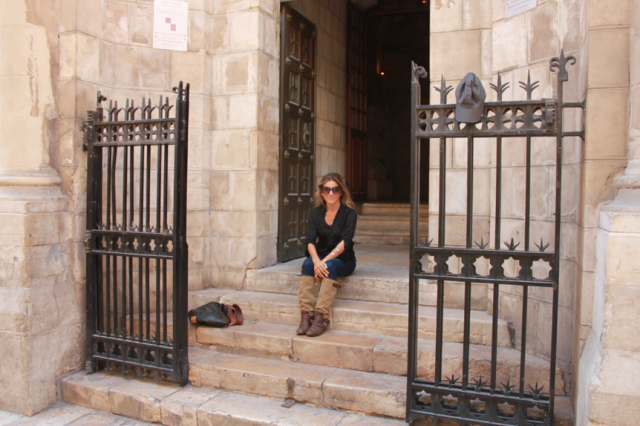 1 & 2 // Stations 1 and 2 are housed within a little courtyard near Lion’s Gate, the north-east entrance to the Old City that faces an iconic Russian Orthodox Church and the Garden of Gethsemane [see below for more]. The courtyard is pretty; beige limestone and colorful flowers in a very clean space. Two small chapels exist within the courtyard: the Church of Flagellation and the Church of Condemnation. It’s said that Jesus was condemned to death and given his cross to bear within this space. 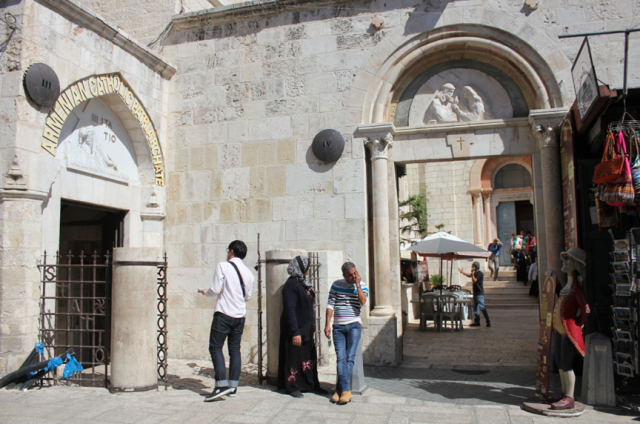 3 & 4 // Stations 3 and 4 are adjacent to one another, marked by two simple roman numerals and carvings near the doorways. This is where it is noted that Jesus fell for the first time and where he sees Mary. 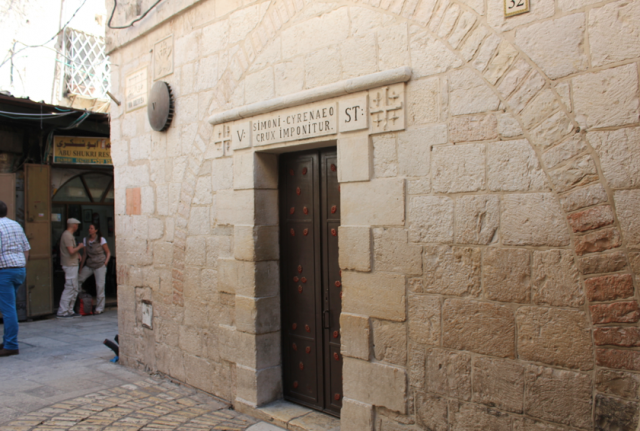 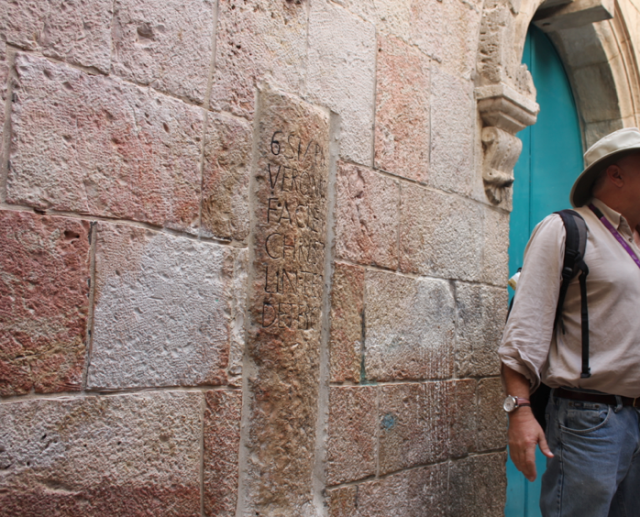 5 & 6 // Beginning at the fifth station, the remaining Stations of the Cross are dotted throughout a street that winds its way through the Old City, passing by shops and ending at the Church of the Holy Sepulchre.  The street sign says Via Dolorosa so make sure to follow the signage as it curves around. You’ll see carvings on the wall or a simple roman numeral to mark the station so keep your eyes peeled as most are fairly nondescript. The fifth station, which mentions Simon of Cyrene, is where it’s said that Simon took Jesus’ cross and helped carry it. The sixth station, where Veronica wipes Jesus’ face, is the foundation for the Catholic tradition that holds that Veronica’s veil was/is permanently imprinted with Jesus’ likeness. 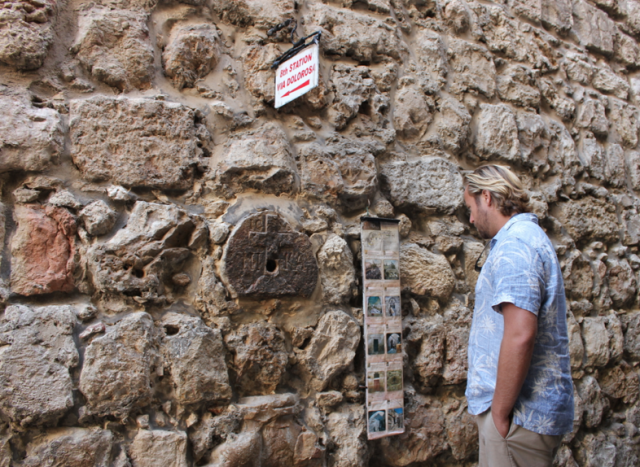 7 – 9 // Stations seven and nine mark Jesus’ last two falls, and the eighth station (pictured above) is where he encountered women of Jerusalem. We actually missed the ninth station during our walk because it’s a bit hidden. It’s actually not on the Via Dolorosa, it’s at the entrance to the Ethiopian Orthodox Monastery + Coptic Orthodox Monastery which used to be a single entity. They form the roof structure of the Chapel of St. Helena in the Church of the Holy Sepulchre.

Church of the Holy Sepulchre 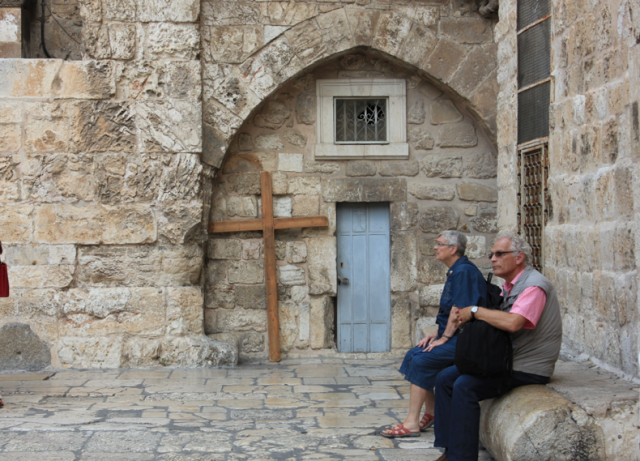 10 – 14 // The Church of the Holy Sepulchre is the holiest site in Christendom. The church was built over the place where Jesus was crucified and where he was laid to rest before his resurrection. The final five stations of the cross are housed within the church and mark the end point of Via Dolorosa for those following the path. The church itself is incredibly ornate inside – gold upon colored glass upon utter decadence that seems in stark contrast to the simplicity of Jesus’ life and teachings, yet very aligned with what you’d expect from time of the crusaders.

The tenth station marks the point at which Jesus is stripped of his garments and sits to the east of the main entrance. From there, you’ll head inside where the final four stations exist.

The 11th and 12th stations are adjacent to one another, up a flight of narrow stairs that sit immediately to your right upon entering. The 11th station marks where Jesus was nailed to the cross and the 12th marks where he died on the cross. On the day we visited there was a short line to get up to an altar where the cross is said to have stood (above, we’re standing in front of the 12th station). Pilgrims kneeled, prayed and lit candles before exiting to the final stations. 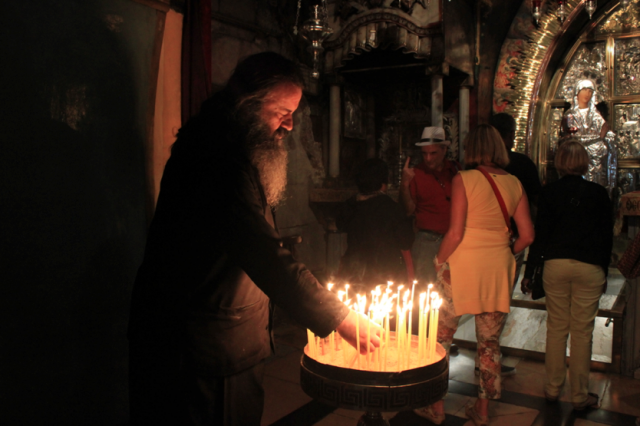 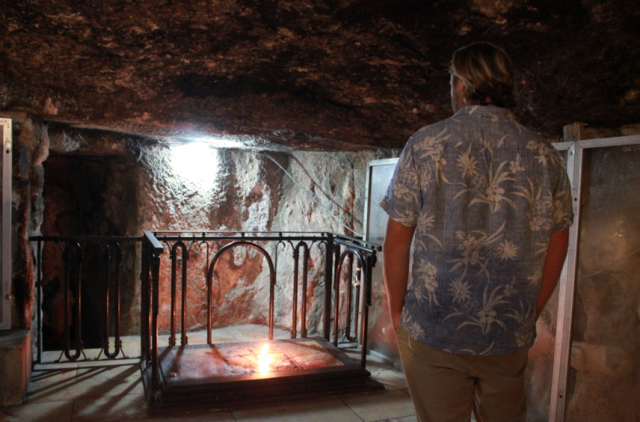 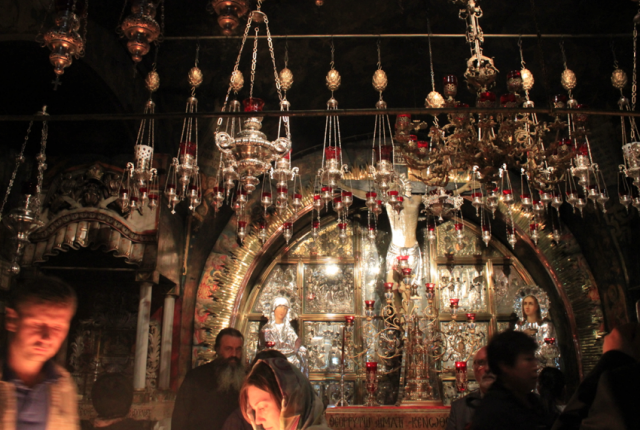 The 13th station is probably the first station you’ll see when you enter the Church of the Holy Sepulchre. It’s a slab of stone sitting front and center and is said to be where Jesus is taken down from the cross. On both times that we entered, pilgrims were kneeling in front of the stone, wiping their scarves, rosaries and belongings on the place where Jesus was said to have been laid. Above the stone are ornate lamps with frosted glass suspended from chains of gold crosses (see above). 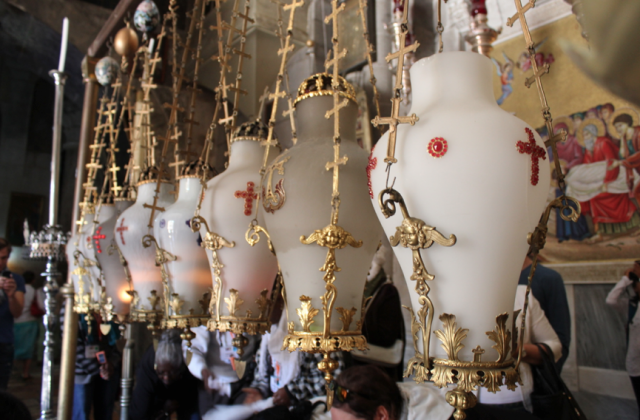 The final station is the tomb where Jesus was laid (and from which he was resurrected). The entrance to the tomb, rich wood and a small entry point, is decorated with the faces of the disciples and with small lamps that hang directly above. You can expect the line to gain entry to the tomb to be long. We waited upwards of an hour to gain entry and were given 5 – 10 seconds inside before a priest moved us out. For those visiting Jerusalem on a pilgrimage though, this is a probably a worthwhile hour despite the few moments you’ll get to be in the cave. We went mid-day which may have accounted for the long line – an earlier jaunt to the church may save you from waiting too long to get in. 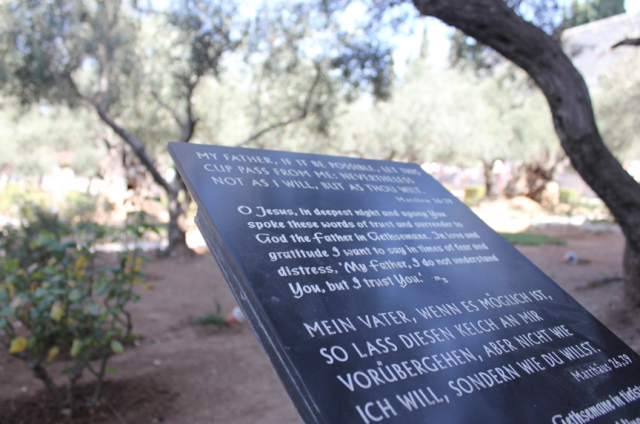 I would highly recommend visiting the Garden of Gethsemane at some point during your journey, perhaps even immediately preceding Via Dolorosa if you’re doing the walk with intent. It’s not technically part of the Via Dolorosa but it does have a great deal of significance within the scope of this entire experience. The Garden of Gethsemane is at the foot of the Mount of Olives and is the place where Jesus is said to have prayed the night before his crucifixion following the Last Supper. It’s a small garden with an extraordinary presence. Many of the olive trees are 1000+ years old, with eight of them alleged to have been ‘silent witnesses’ during Jesus’ time. For me, it really pulled the entire experience together. We visited the garden on our final day and it was a great way of putting everything in perspective. Knowing that this entire space would have looked a lot different 2000 years ago, it was interesting seeing the distances between where things would have happened – from the Garden to the first station, where he was condemned, to the final stations – Jesus being crucified and his burial tomb.

For anyone even moderately religious, the Via Dolorosa is definitely worth the journey. Everything’s very close so it doesn’t take a great deal of time to walk the path from the first station to the Church of the Holy Sepulchre. If you aren’t interested in doing it in order from Station 1 – 14, you can still leisurely walk the street and pop into the markets while seeing the majority of the stations like we did.

Have you walked the Via Dolorosa? Any tips, advice or favorites from the experience?

4 Towns to Visit in Pays Basque