Masada, Qumran and the Dead Sea

We said our goodbyes to Northern Israel, eating breakfast while the sun rose over the Sea of Galilee for final morning. We were making our way south, heading to Jerusalem with a number of stops along the way. I was in for a big bucket list experience: testing my buoyancy in the Dead Sea. 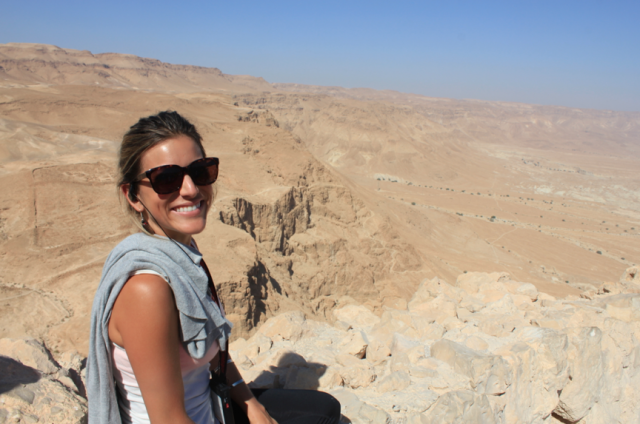 Our first stop for the day was Masada, an ancient fortification that sits on top of a rock plateau overlooking the Dead Sea. Visitors enter at the base and have the option to hike to the top (about an hour) or opt for the quicker, far easier route: the cable car. In truth, I had intentions to climb to the top to sneak in a bit of exercise and get the full Masada experience. We were limited on time though and our group was taking the cable car up so we could tour the compound and hear the story that makes the fortification one of the most popular sites.

Herod was the man behind Masada and it’s no surprise that this compound was his brainchild. After seeing some of his insanely over-the-top buildings strewn about the Israeli landscape, this one fits the bill. Even if you don’t know the story of Masada, you can’t help but be impressed. Workers built what was (and still is) an incredibly complex site on top of an isolated hill-top to act as Herod’s vacation home. All of the tools and supplies had to be carried to the grounds and then other important resources (you know, like water) had to be routed here to make it a functioning space. Herod went so far as to have wines from Italy shipped to Masada (which meant they literally went by boat, then were carried over ground that then up this hill/mountain top to make it to his dinner table). If you’re visiting Masada, what makes it most interesting is its post-Herodian tale. The Cliffs Notes version is essentially this; the Jews who occupied Masada revolted against the Romans. When the Romans (who outnumbered the Jews greatly) finally laid siege on Masada, the Jewish population worked out a lottery system to kill each other off – including women and children – so they wouldn’t be slaughtered by the Romans (the last man committed suicide since he was solo). Legend tells us that they left their foodstuffs in plain sight so that the Romans would know that they chose death, and that it wasn’t forced upon them by lack of resources. It’s said that upwards of 1000 Jews were killed on that day, but archaeologists tell us it was maybe more like 30 people. Regardless, it’s a sad tale that somehow evokes a sense of courage and pride; for most Israelis, it’s viewed as the heroic ‘last stand’. Until recently, Masada was the graduation site for IDF forces who would take that special moment to swear that Masada would never fall again. 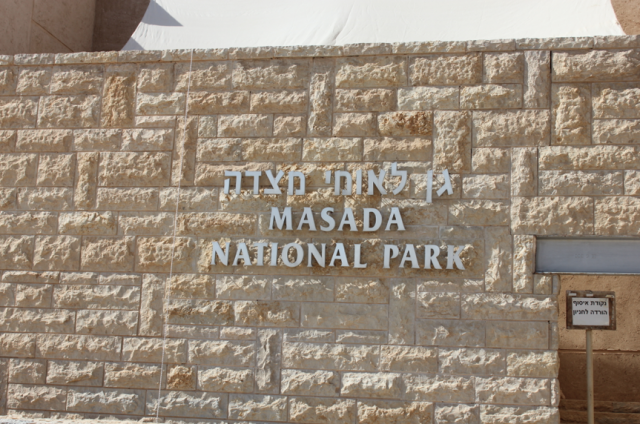 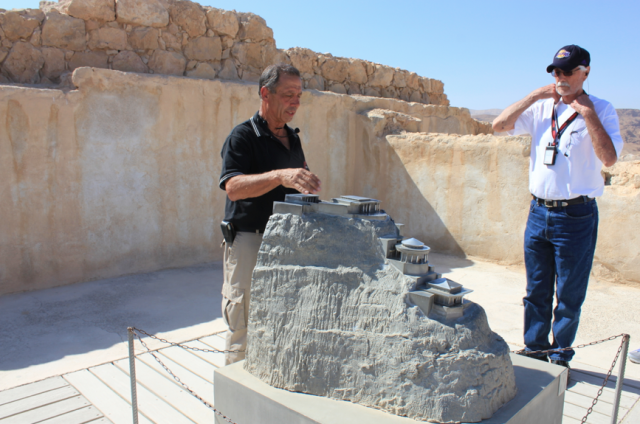 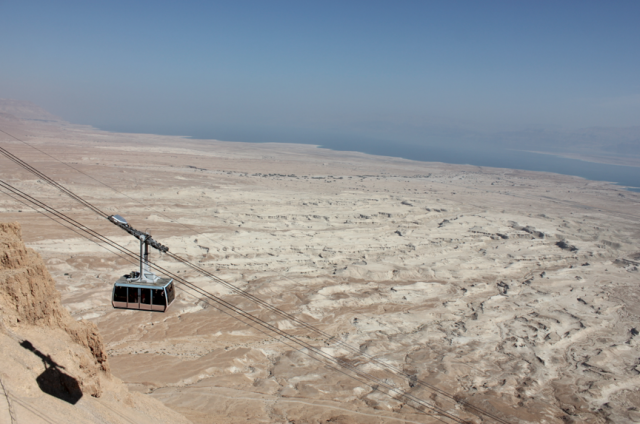 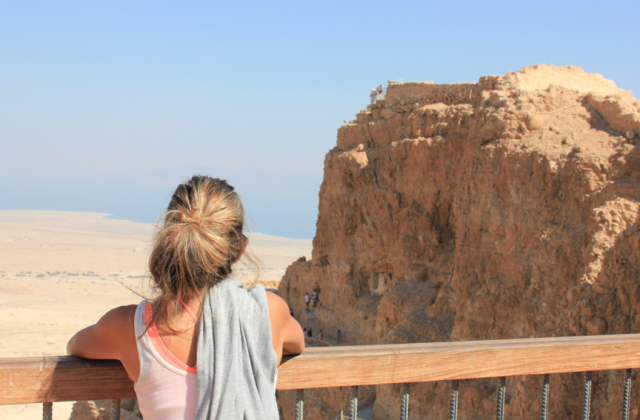 Many people who visit Masada do it during sunrise, when the weather is crisper and the experience is magical. Abraham Tours offers one of these early morning tours (275 NIS, about $70) and the travelers that I met that had gone through with the 3AM wake-up call were happy they’d gotten up early and done the hike. From the ground the hike looked incredibly steep and intense, but from up above (in the comfort of our cable car), the path actually looked very doable. If you’re going during mid-day, be sure to pack plenty of water as it gets extremely warm by late morning.

Qumran and the Dead Sea 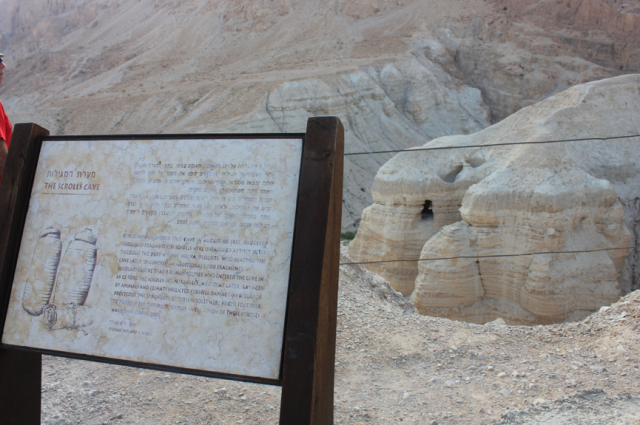 Following our time at Masada and a terrible tour-approved lunch that we opted out of, we made our way to the Dead Sea by way of Qumran. Qumran is on the northwestern shore of the Dead Sea and is famed as the spot where the Dead Sea Scrolls were uncovered. We had seen the Dead Sea Scrolls the day before at the Israel Museum and they really are an incredible sight (the entire museum is very well done). The scrolls were found in the 1940s by young Bedouin shepherds and are hugely important linguistically, historically and religiously. For Christians, the scrolls validate a great amount of the Bible, with either copies of Biblical script or other documentation from the same era. To see the preserved documents at the museum is pretty amazing – naturally, some are dilapidated and shredded but there are a select few that are in such incredible condition it’s astounding to think they survived centuries undiscovered and in one piece.

If you’re heading to the Dead Sea, it’s worth popping by Qumran to see where the scrolls were discovered to put it all in perspective. 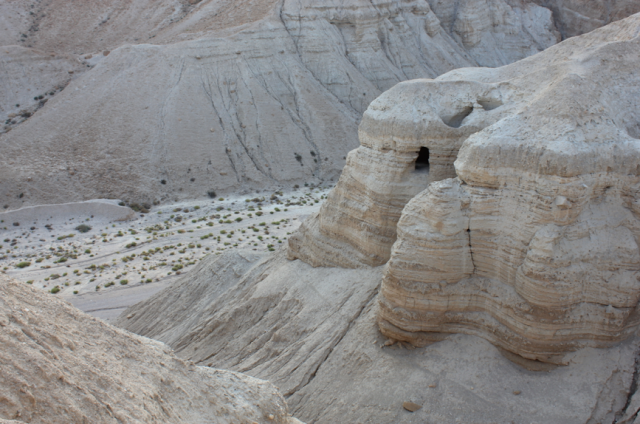 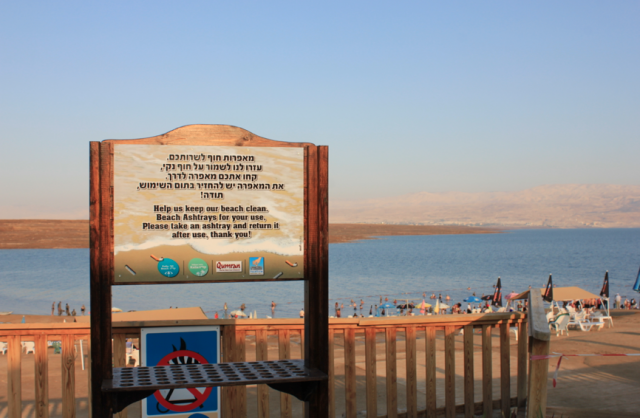 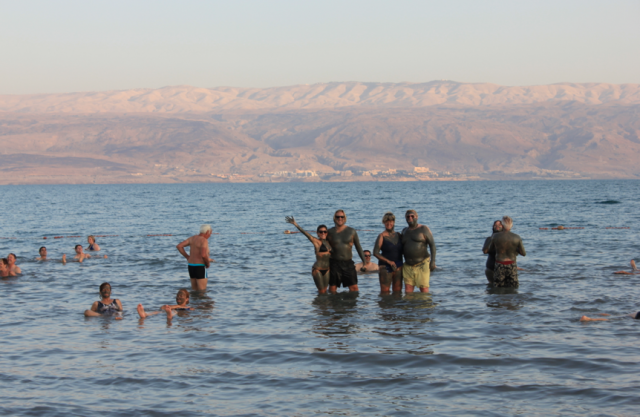 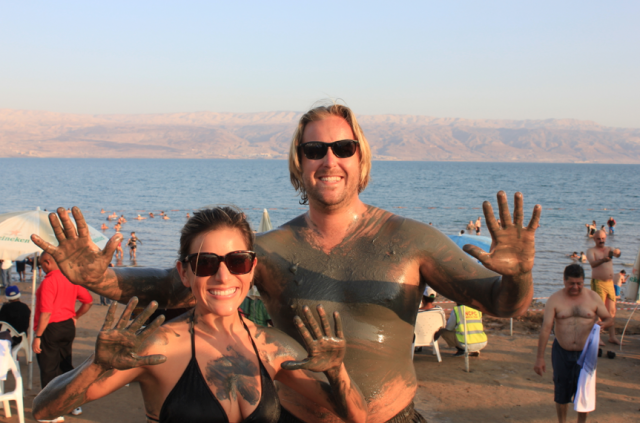 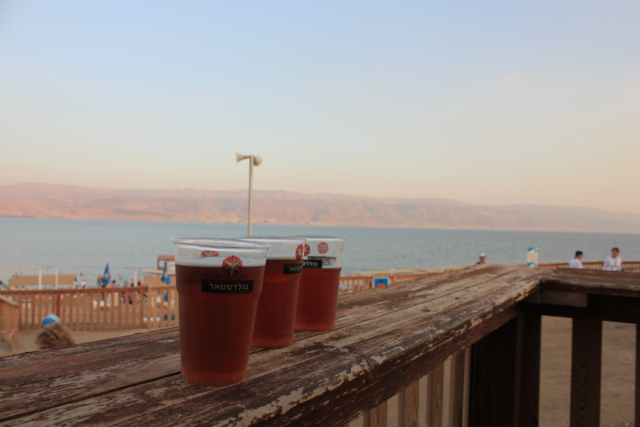 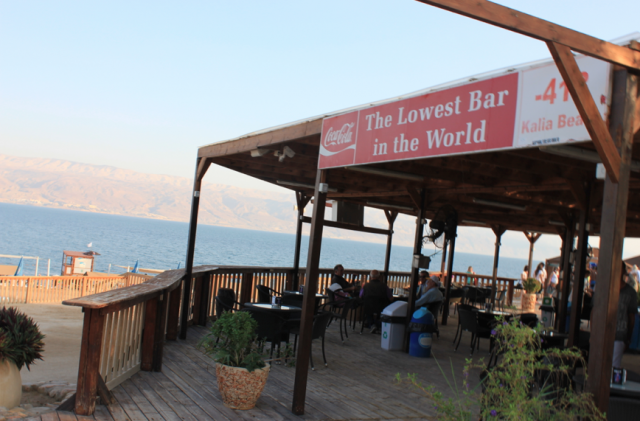 Finally, our last stop for the day was the Dead Sea. I’d been waiting to experience the Dead Sea since day one. For most travelers, it’s a bucket list experience when traveling to the area, and for us it was no exception. We had about an hour and a half to float and bask before returning to Jerusalem for the night, and we were excited to take advantage of every moment. Armed with my bathing suit and a cover up, I did a quick change and headed down to the shore.

People had mentioned buying flip-flops before heading in as the bottom of the sea can be tough on your feet. I judiciously went this route and bought a cheap $7 pair of flip-flops from a major tourist shop to prepare. So unnecessary. You don’t need shoes to go in. In fact, my flip-flops ended up getting so stuck in the mud that I had to take them off within two minutes of trying to enter.

The Dead Sea’s salt and mineral content is insanely high which makes it buoyant and healing for visitors. That being said – and you’ve heard this before! – you will feel any cuts that you have on your body. It’s not unbearable, but I had a few minor scrapes that were tingling when we got in the water. Oh, and don’t be surprised if you’re less-than-graceful entering the sea. The slick mud makes it really hard to maintain your balance when you’re heading in (nearly everyone fell trying to get in).

We coated ourselves in mud and then sloughed it all off in the salty waters while we floated for a solid thirty minutes. There were mud fights (not a good idea) and lots of war paint, and we finished off the day with a fresh water rinse as the sun set. If you’re paying the Dead Sea a visit, carve out enough time to really take it in beyond the floating and mud slathering. There’s a bar, the ‘Lowest Bar in the World’, as you make your way to the sea, and it’s a great place to grab a drink and watch the sunset (sadly, there was no wine when we went, but there are local beers that you can choose from). Those bucket list moments pass so quickly and I always find that it’s nice to take a few moments to really drink them in and remember what’s happening around me – the color of the sky, the sounds, the people – and take a mental snapshot.

Have you been to the Dead Sea? What were highlights for you?

I have one more Israeli adventure to share before my bucket list  journey comes to an end!