You guys, I’m not even entirely sure where to start. I’ve been going through the process of obtaining a second citizenship for so long that it still feels surreal to have made it through this journey. As I’ve alluded to a few times in the past, I come from a very multi-cultural family. My mom was born and raised in Malta and moved to the United States as a young teen. My dad is half Maltese (my grandfather’s side) and half El Salvadoran (my grandmother who I shameless post all over this site) so I’m predominantly Maltese, though American by birth.

I never appreciated growing up with a culturally rich family heritage until adulthood. As a kid, I resented it more than anything. The last thing I wanted was for my family to speak their bizarre foreign language that no one ever understood. Into adulthood, I began to cherish it. I loved the cultural ties that we retained and the fact that my mom had this great, albeit difficult, story of immigrating to the US in the 60s. I loved that my grandmother spoke Spanish to us and taught us to make tamales in her tiny kitchen during the holidays. The more I grew, the more I wanted to keep that culture alive for myself and for my future children.

I also wanted the opportunity to live and work abroad more freely. I began dabbling with the process of a second citizenship around 2009. In 2010, after returning from London, I seriously began looking at opportunities to gain dual citizenship through gaining Maltese citizenship status. I researched endlessly. I downloaded and printed every document on the subject. I read lawyer’s blogs on the matter. I called my local Maltese embassy to try to discuss next steps. I wanted desperately to learn more and make this happen. The process started then, and it continued for years. It was difficult, and there were many times during that process that everything stalled and felt as if it would go nowhere and would never be realized. In 2014, I began talking to someone in Washington, DC who was more knowledgeable and helped educate me further about the process and everything that I’d need to provide: documents – originals in many cases – that dated back to my grandparents and great-grandparents’ generation in Malta to show proof of birth and of marriage in Malta. I was fortunate to have a family member who was able to assist me hugely with the gathering of information, a months-long process to try to secure everything to apply.

It’s been three years since the application was officially sent in, and over seven years since I began this long process of educating myself and gathering information. I followed up religiously and set event notifications on my calendar so I would be diligent about emailing and calling. I was awaiting news, any news, that Malta was at least reviewing my application and making progress.

Last year in May, I stared at my inbox, at a message from the Maltese Embassy that had popped up. The contact that I’d been working with in DC for a number of years confirmed my status as a newly-minted citizen of the Republic of Malta, complete with an ID number that I could reference. The final step in the process was acquiring my Maltese passport During our recent trip to Washington, DC a few weeks back, I finished the process by submitting biometric scans that were then forwarded on to Malta for my passport application.

Today, I came into work and found a package on my desk from FedEx. 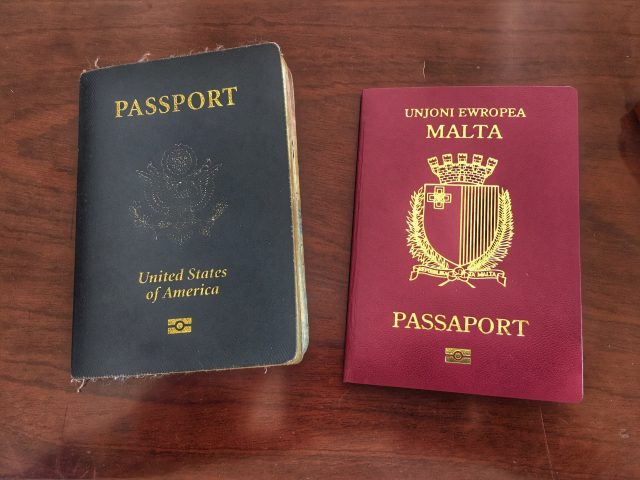 IT HAS ARRIVED. I’m officially a Maltese passport-holding citizen and can’t even begin to express in words how exciting this day is for me. To have made it to the end of this arduous process is one of the most satisfying things in the world, and to know that we now have the options and flexibility to continue living our lives in new and exciting destinations provides one of the most thrilling emotions imaginable. For me, this represents cultural heritage. It represents freedom of movement. It represents opportunities for our future kids as they look to pursue global opportunities down the line. It also represents pure and unadulterated perseverance. There were many, many times I considered whether this process would be worth it; if it would be fruitful in the end. Today, I couldn’t be happier for sticking with it. ??

The Truth About Wanderlust

Hope for Hospitality and Tourism Amidst COVID-19