Staci and I woke up this morning bright and early in time to grab breakfast from our hotel’s cafe and get in some valuable internet time. After showering and getting ready, we headed down to the Acropolis. Athens isn’t in its best state right now if you haven’t heard. There was a demonstration taking place down the street in Omonia Square and a strike was going on today. Public transportation (all public transportation) was a no-go, so our only option was to pick places we could see on foot. We took a twenty minute walk down to the historic part of the city to take in the main sights. 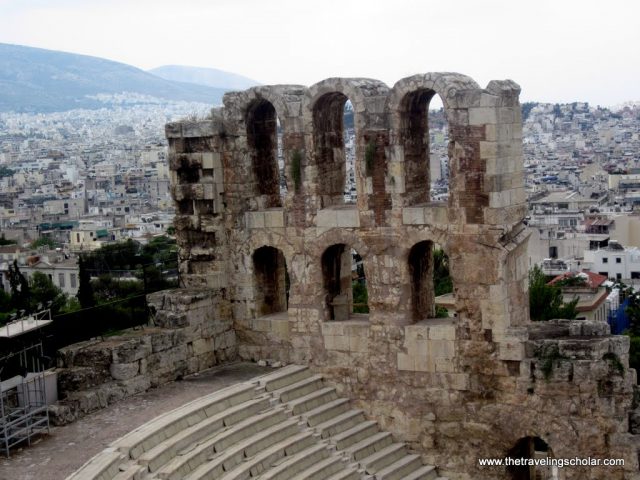 Before we even got to the city’s main draws, the views were stunning. The elevated location allows for some great photos of the houses and architecture below. Further on, we entered the main gate and had access to the main sites: the Parthenon, the Roman Agora, and the temples. The entry fee is €12 to access 6 different sites but when I asked for a student discount and flashed my student ID card, I was informed that students get in for free. Not having to pay the entry fee was a surprising bonus that made the experience that much better.

Our first glimpse was of the Temple of Athena Nike. The temple that has survived was built around 420 BC and, as such, has seen an incredible amount of history. No matter how many times you see pictures of the massive columns towering over the city, nothing prepares you for seeing them up close. It’s an incredible sight with a history and tradition that many children – including myself – grew up with. 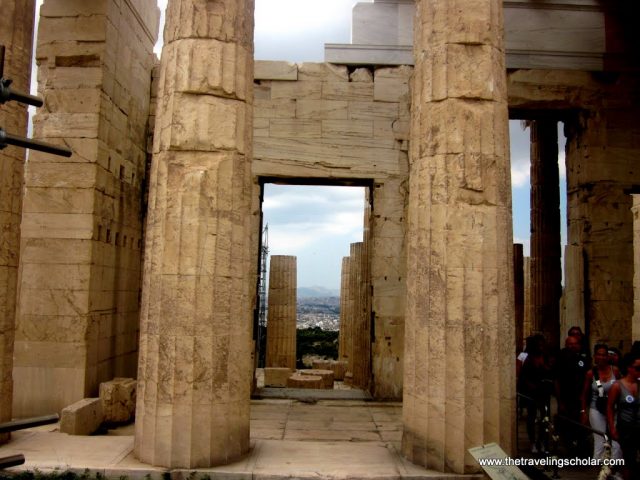 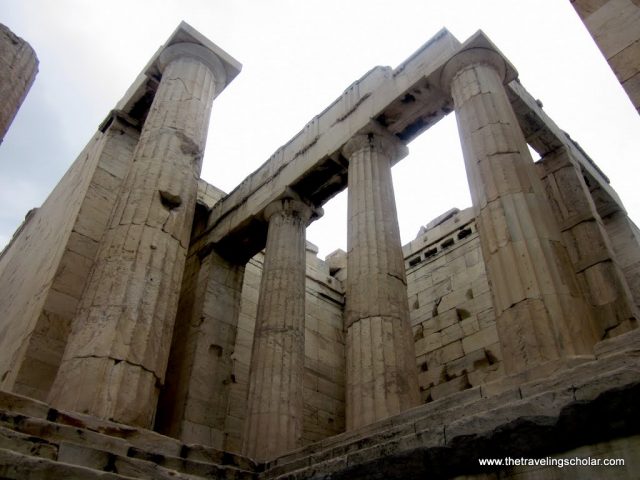 After crossing through the columns into the main area of the Acropolis, the Parthenon stood surrounding by the millions of tourists that make a pilgrimage to Athens in the summer months. The Parthenon is a temple to the goddess Athena (the goddess for whom Athens is named after). Construction began in 447 BC and lasted for about 15 years. 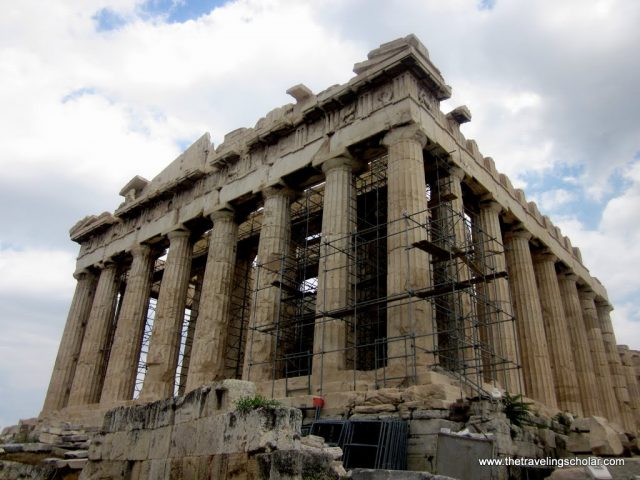 The Parthenon is probably the most famous in terms of Greek architecture, but I actually found some of the other buildings to be more domineering and incredible. I actually found the Erectheion, which stood nearby, to be more aesthetically impressive, albeit a bit more disheveled and broken down. The construction on this piece was finished around 405 BC, giving it a weighty history. 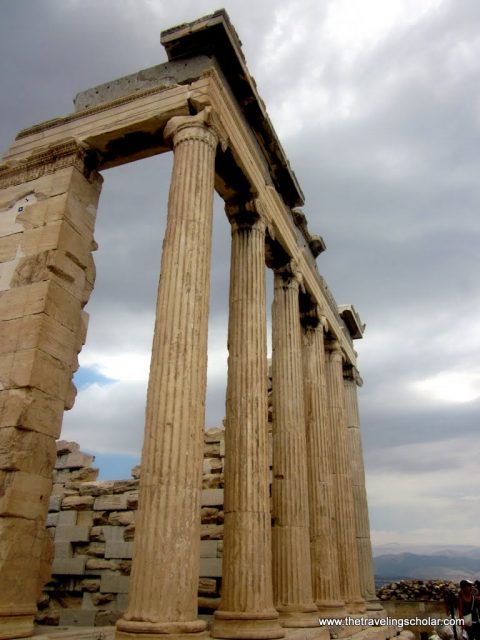 I’ve always been drawn to Athens as a destination in large part because of my father’s intrigue with Greek mythology. In turn, I became enthralled and found the history of Greece — and its lore — utterly fascinating. Now that I’m able to actually visit these sites, it’s pretty surreal. After touring the temples, we headed downhill to the Ancient Agora. 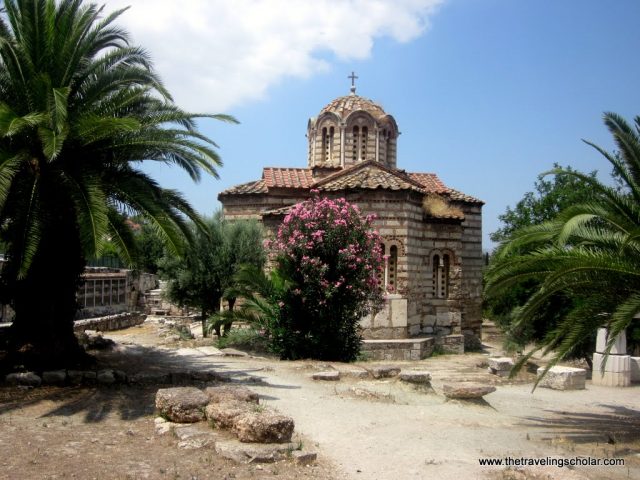 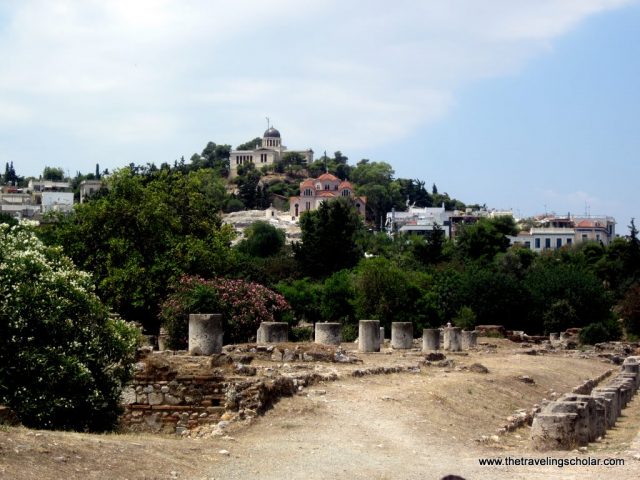 A number of buildings were added to the agora by the second century: structures like the Altar of Zeus Agoraios, the Temple of Ares and other religious sites. We wandered around for a bit before perusing the museum and making our way out to lunch. We spent about an hour in the shade while we enjoyed local fare mixed with glimpses of the Acropolis in the background.

The area is inspiring and reason enough to visit Athens, in my opinion. To be honest, though, I have been very unimpressed with Athens as a city. Greece was #1 on my European must-see list before moving to Europe and, perhaps because of my high expectations, it has failed to fulfill thus far. The historical part that we saw today was incredible, but for the most part that was all that we found ourselves wanting to see. The city itself is surprisingly dirty; graffiti covers the walls throughout the city (e.g. a pretty piece of art that says ‘F*ck the cops’ outside of our hotel) and the buildings are a bit decrepit, and not in a cool ancient ruin-type way. We had set aside two days to explore Athens and have found ourselves wanted to head off to the next adventure already.

We’re planning on escaping to the Saronic Islands tomorrow and then visiting the Cyclades for the following two days/one night (despite our already-paid for room in Athens).  Greece has always been such a must-see for me that I can’t let it fail! My cousin and I are both at the point where we think the islands may make up for the shortcomings of Athens. The idyllic version of Greece that comes to mind when you think of Grecian vacations is more than likely the sun-drenched beaches of Santorini, and the blue-capped houses and tanned and toned locals that dot Mykonos. We’re hoping that the next few days will enlighten us and leave us with great memories of Greece.

Have you been to Athens? What sights or experiences would you recommend to a first-timer to the city?

HOTEL INSIDER: A Stay at The Old Markets, Symi