We’re now getting ready to head to Machu Picchu and I’ve finally gotten my hands on some more pictures from the past few days (my SD card reader is temperamental) and wanted to share some snapshots from our trip to Pachacamac. Located about an hour southeast of Lima, Pachacamac is a pre-Colombian citadel that draws tourists captivated by ruins and local history. We hopped in a cab during our first day in Peru and were fairly easily talked into a trip to Pachacamac. We had stumbled upon a few references to the ruins but it hadn’t been on the top of our must-do list in Lima. After knocking out many of the major sites in just a few hours, we decided to make the trek after an Incan primer at Museo Larco in Lima.

Entry to the site is S/.8 per person, plus S/. 20 for the guide. I believe the guide is mandatory, but even if it isn’t, it’s a must for gaining a real understanding of the site. Our guide, Gilberto, was hugely informative and joined us as we explored much of the area by taxi. There was a portion of the trek that can only be done on foot, but we were able to knock out the majority fairly quickly due to vehicle access. 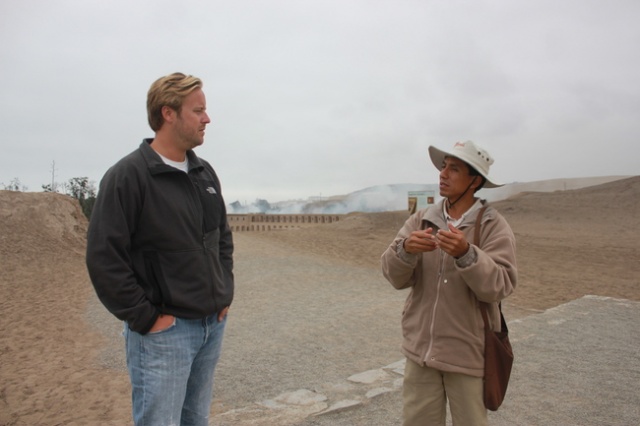 In all honesty, we knew nothing of what we were about to see. We knew we were in the Lurin River Valley and were going to see ruins; anything beyond that was a bit of a mystery to me {this is why the guide was useful}. Gilberto explained a few fundamental things about Pachacamac:

1) the site has only been partially excavated. As we could clearly see during our tour, much of the area is still underground. Due to lack of funding for archaeologists, only a few areas of the site have been exposed. From what I gathered, the site was declared a nationally preserved area in the 1940s and excavation began rather recently (and very slowly).

2) The site isn’t necessarily Incan. It’s pre-Pizarro to be certain, but the site was home to four different groups that used the space as their headquarters: Limas (around 200 AD), Waris (around 600 AD), Ichmas (around 1000 AD) and finally, the Incas (around 1400 AD) who ultimately made their impact across Peru before Pizarro conquered.

We were taken to a few primary areas to explore. Our first stop was the Temple of the Moon. The moon, represented by silver, was viewed as a symbol of the feminine. As such, the Temple of the Moon was the area where select women were taken. They were designated as women to be married into the upper echelons, women to act as servants or women to be sacrificed (women and boys were typically used as human sacrifices). 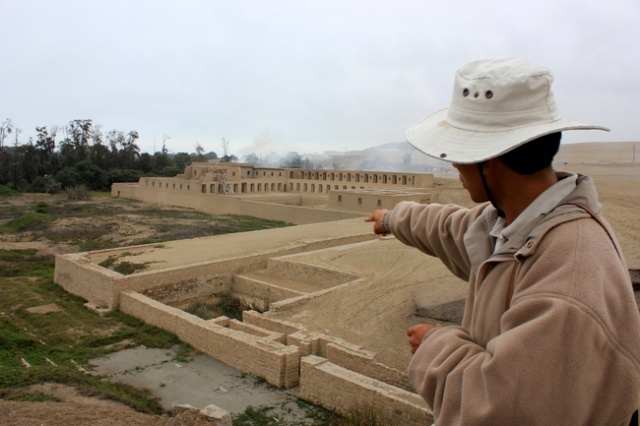 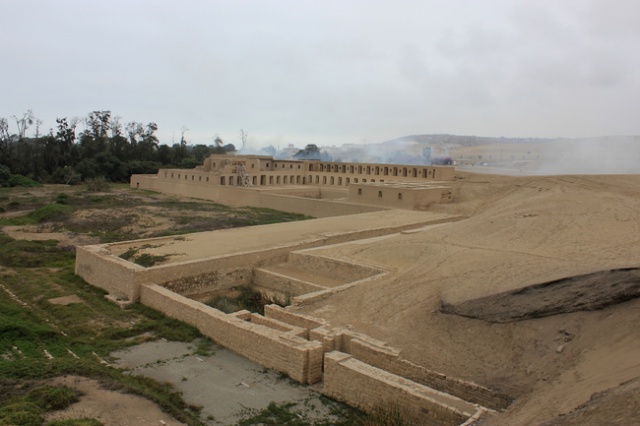 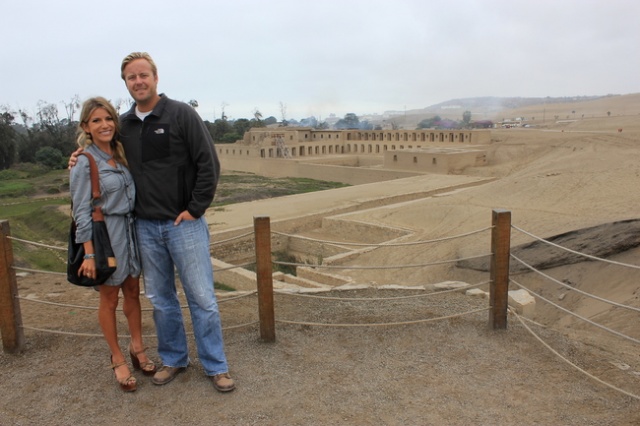 Our next stop was an intersection; a road that would have been a main road for these pre-Colombian societies. The road is simply marked as Calle Norte-Sur. 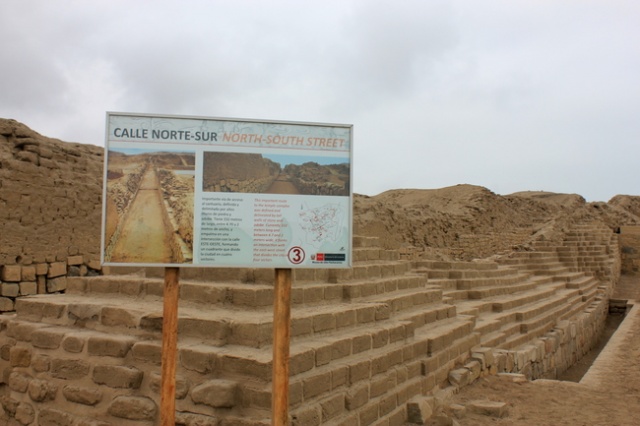 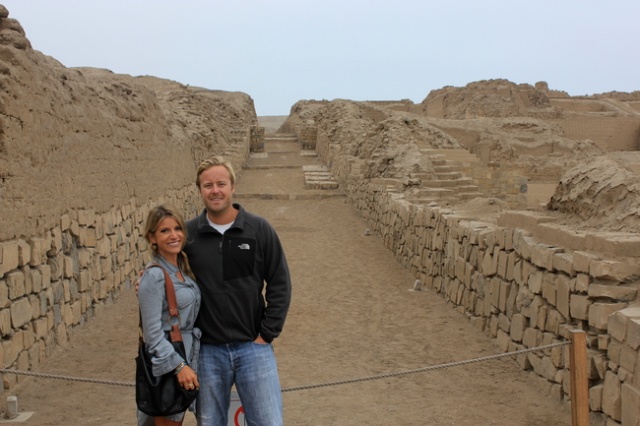 Along the way, Gilbert pointed out ruins that would have been old, palatial buildings for the leaders in the given society. Ramps were used to make it easier for llamas and alpacas to deliver goods. 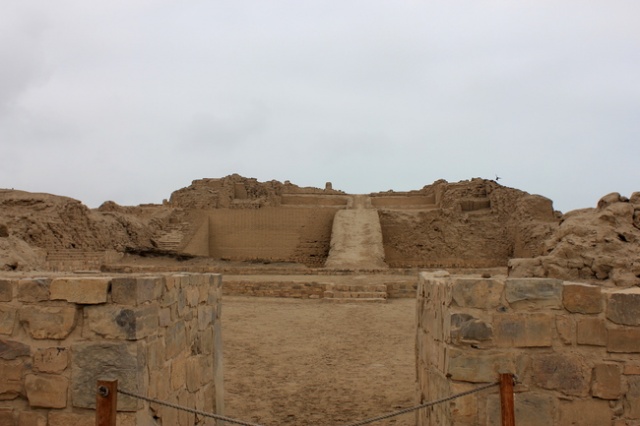 We explored a few other areas of the ruins and made a final stop at the Temple of the Sun, the highest point that we could see. Where the moon represented femininity, the sun symbolized masculinity and was represented by gold. The cab couldn’t go the Temple of the Sun, so we did the trek on foot. It was seriously cold so getting to the top left us with chattering teeth and blue lips, but we made it. The view from the top also gave us some perspective on how strategic their location was: the sea to one side, the river on another and the desert also in plain view. 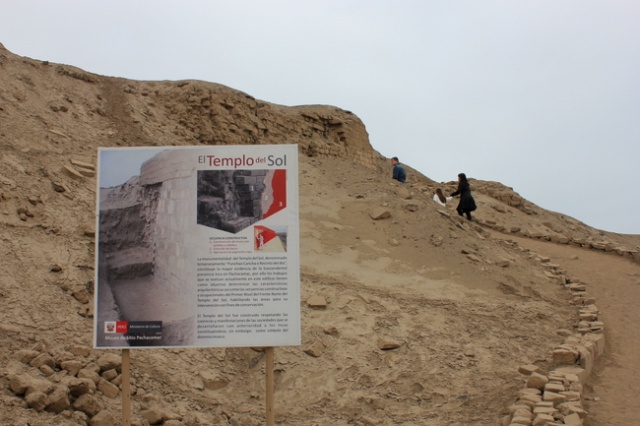 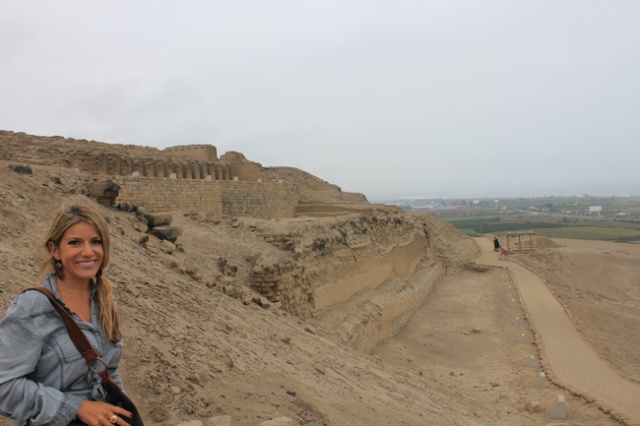 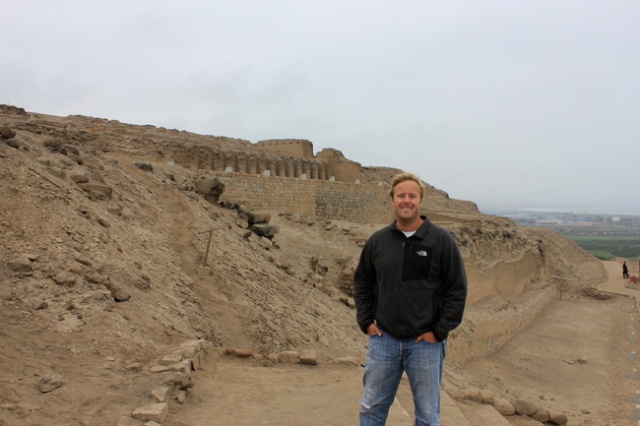 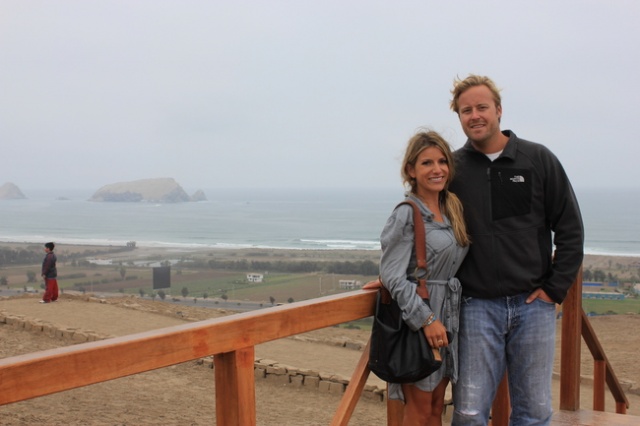 While we probably wouldn’t have planned that excursion on our own, we both left feeling like we’d accomplished a serious amount of sightseeing in a single day. Plus, having a better understanding of the culture helped us get geared up for what is sure to be one of the crowning moments of our trip: Machu Picchu.