After exploring Athens yesterday, we quickly decided that the islands were going to be our plan of attack. We had originally thought we’d spend two of our five days in Greece exploring the capital but after our indifference with the city we decided our time would better be spent elsewhere.

With extra time on our hands, we knew that the Cyclades were a must; we either wanted to head to Mykonos, Paros or Santorini to get a taste of the Greek islands. We also wanted another day trip to occupy the extra day, and while we had tossed around the idea of hitting up Sounion, Olympus or Delphi, we thought another island might be a better use of a day considering our current state of mind. I had heard good things about the Saronic Islands from a couple of blog readers and Hydra, specifically, was touted as being a gloriously authentic destination. After a quick mental breakdown of pros and cons, we  decided that Hydra would be the day trip of choice. 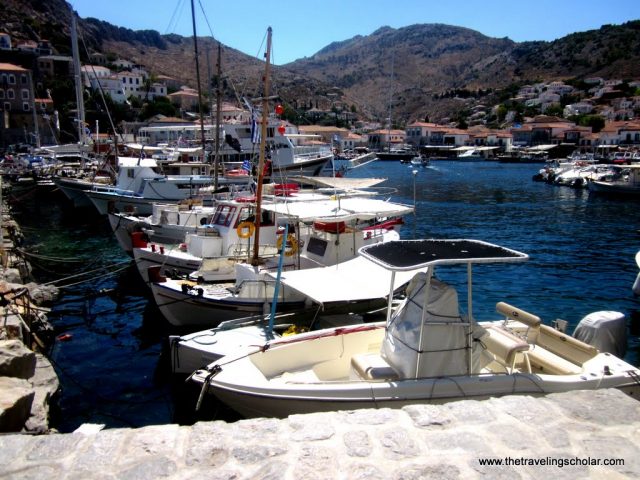 We got up bright and early at 5:30AM to get to the Piraeus port where ferries depart. We didn’t know the exact time of departure for Hydra, but we still needed to get our tickets for an early morning ferry. We snagged tickets for a 9:00A boat for€25 euros each way and landed on Hydra about an hour and a half later.

I knew immediately that Hydra was a good choice. The houses, restaurants and cafes that dotted the island were idyllic; exactly what I had imagined when I thought of Greece. The island seemed rather undiscovered by tourists. While most people tout Ios, Mykonos, Santorini and the rest of the Cyclades as being the go-to spots, the Saronic Islands seem rather untouched, on the whole; definitely a nice escape from the hustle and bustle of Athens.

For added bonus and charm: there are no vehicles allowed on Hydra. The island can be explored on foot or on donkey, the only real forms of ‘transportation’ permitted. Donkeys were available for hire after disembarking and though we didn’t partake, it seemed like an interesting thought though I did feel bad for the poor donkeys. We grabbed lunch at a cute waterfront cafe before grabbing another ferry for €3 euro each to a secluded beach on the opposite side of the island.

The sun was shining and the water was incredibly temperate; it was the picture of Grecian perfection. We rented beach chairs and an umbrella and vegged out on the beach for a few hours to catch some rays and work on our Mediterranean tans. After a few hours of relaxation, we departed the island and headed back to the craziness of Athens.

For a quick day trip that offers something different from Mykonos, Santorini and other well-known islands, Hydra is a great option for travelers wanting to absolutely melt and forget time entirely. The tranquility of the island makes it an incredible change of pace from the quick pace of Athens. The landscape is stunning – just what you would expect from a beautiful Grecian escape – and the feel has a serenity about it that balances the frenetic feel of the city (and also counters the nightlife of Mykonos).

Check back to see snapshots and recaps from our time in Mykonos and Paros. While Athens didn’t live up to my expectations, the islands are definitely making up for the city’s shortcomings!