Heading into our trip to Brazil, a favela tour was on my must-do list before arrival. I had contacted a company simply dubbed Favela Tour in advance and had communicated with their founder, Marcelo Armstrong, whose tours are touted in guidebooks and online. I didn’t totally know what to expect going in, and while the experience started off a bit rocky (a pick-up that happened 45 minutes late), it ended up being a valuable addition to our time in Rio.

With this tour in particular – though I’d wager that many follow a similar format – we visited two distinctly different favelas. The first was Rocinha, which is Brazil’s largest favela and one of the most densely populated areas in the country. 100,000+ residents call Rocinha home, though exact figures are hard to calculate. I honestly went into this having no real idea of what to expect. We often use favelas and slums interchangeably when we speak about them, but our tour guide kept emphasizing that this didn’t reflect reality. What we were seeing weren’t ‘slums’; they were lower-class communities. 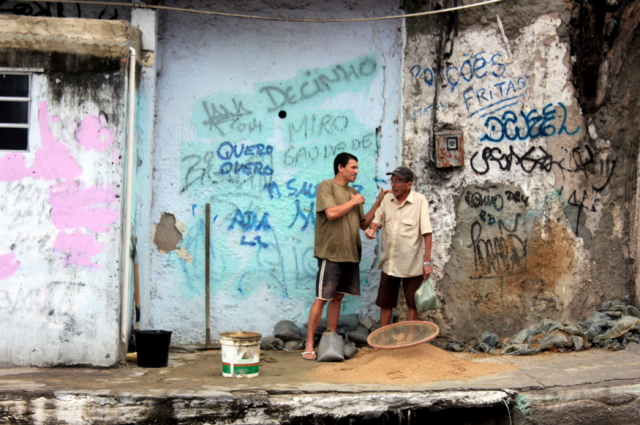 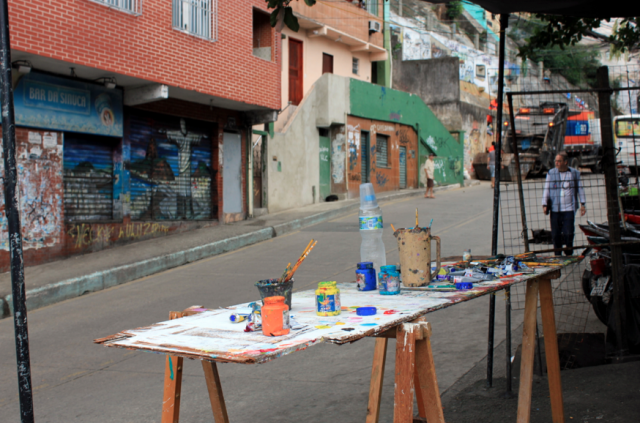 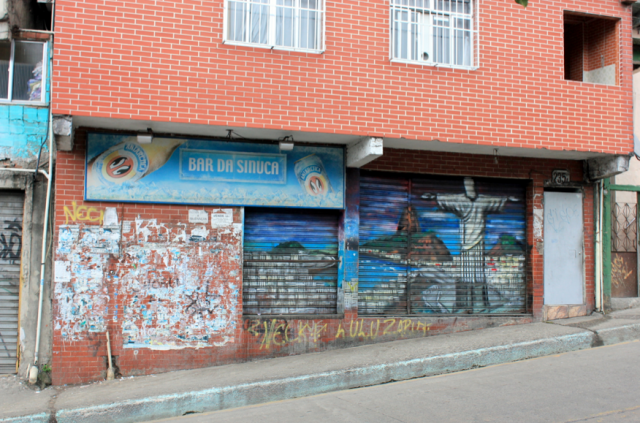 My in-laws, who had just returned from India, seemed to echo those sentiments. After seeing slums in India, seeing favelas with us in Brazil brought a totally different landscape, physically and socio-economically. Infrastructure existed – there were clearly sanitation mechanisms in place (we didn’t see sewage in the streets as we’ve seen elsewhere), and we even saw satellites to bring television to households. There were some small health clinics (I even spotted an optometrist office), some local schools – including schools for more artistic ventures – plus a limited transport system. While I was initially surprised to see the level of development, it makes sense. With 100,000+ people living in a tight community, aren’t these necessities bound to emerge?

I left home that morning after stripping all of the jewelry off my body. I try to be a realistic when we’re traveling and being uncertain as to what to expect (or how much walking we’d be doing within the favelas) I thought it wiser to err on the side of caution. I had heard about the crime associated with favelas. Haven’t we all? Isn’t that the face that is often shown to the global community? Here, our guide reassured us, that we were safe; crime once was a major issue in Rocinha (drug trafficking mostly, and then the byproducts of that), but that criminal activity had begun to wane due to serious effort put into cleaning up the favelas. Now, all of that being said, our guide clearly knew where to take us and had invisible boundaries drawn for us. As with any community, there are probably less safe pockets that we shouldn’t wander around independently. Having someone who knows the lay of the land and the community members is helpful. 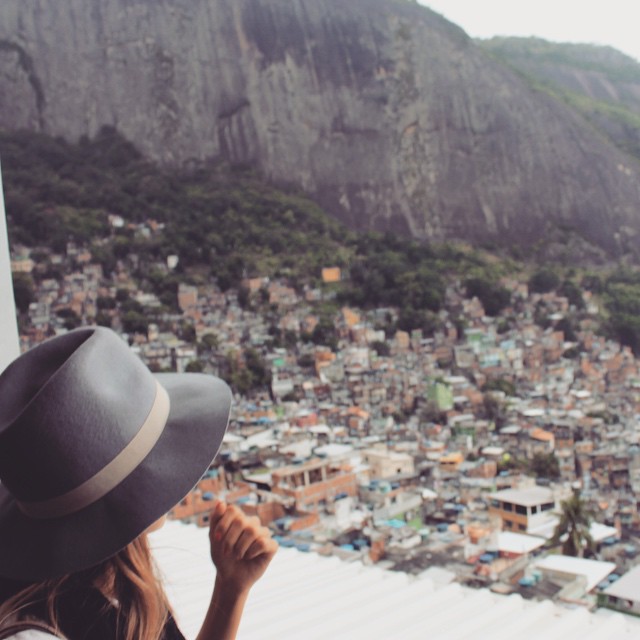 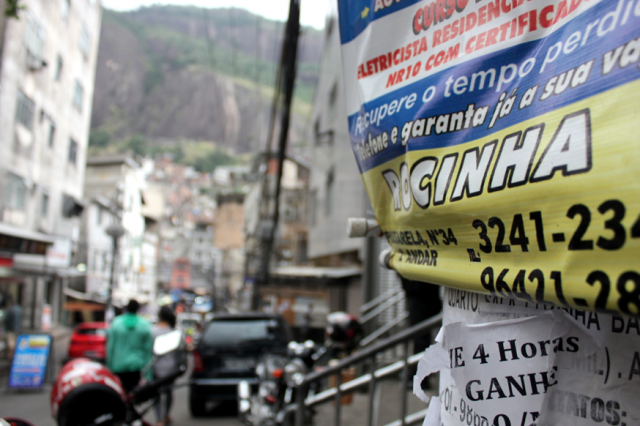 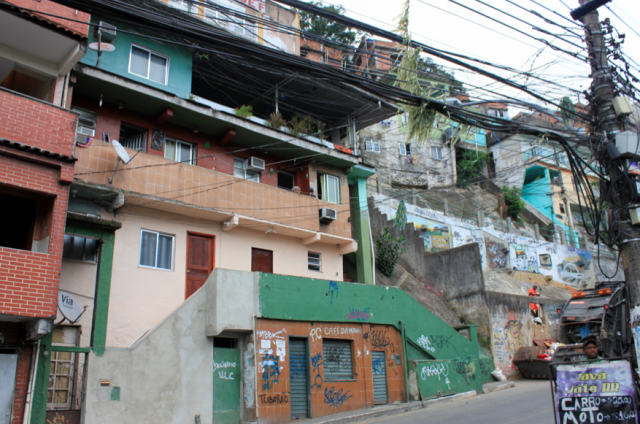 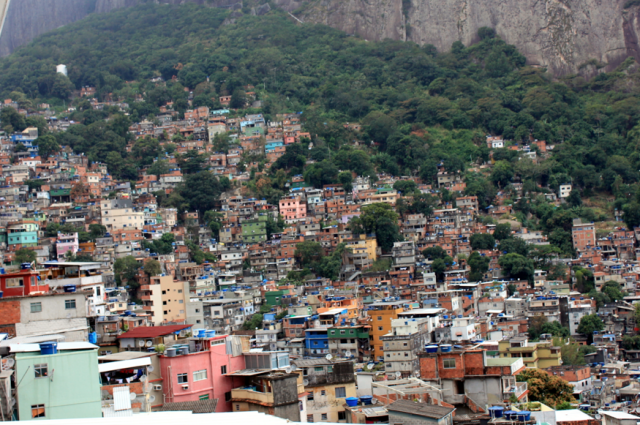 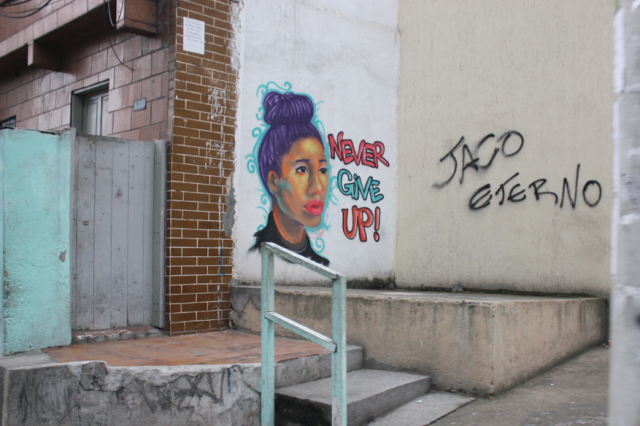 We visited a few distinct areas in Rocinha to get a brief feel for the community system before moving on to our second favela. As I mentioned, Rocinha was huge, the biggest in all of Brazil. The second favela we visited, Vila Canoas, was the opposite. With about 3,000 residents, this little area was vibrant with a genuine sense of community from the get-go.

As we pulled in I was surprised by our surroundings. We had entered a residential street in Rio with gorgeous middle-class homes, paved sidewalks and greenery. This wasn’t what I was expecting at all. As I mentioned, going into this entire experience I didn’t have a great idea of what to expect but Rocinha was more of what I had envisioned. It’s the picture that we see in our minds when people refer to favelas – a colorful cascade of ramshackle homes that somehow evoke a mixture of charm and despair. This community we were about to experience was a bit of an eye-opener: with hundreds upon hundreds of favelas in Brazil, can they really all be the same?

Our first stop was a school/daycare/after school center, Para Ti, that the Favela Tour company actually helps fund. A large percentage of proceeds from the tours go to keeping this organization functioning. Para Ti is an NGO that was actually founded by the former president of Fiat Brazil who lived in the community. In an effort to help the children growing up in the favela, this school was founded to help children develop, academically and otherwise, to give them more opportunities for the future. 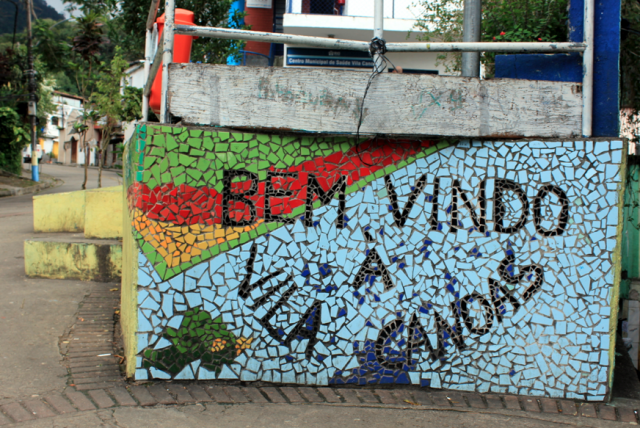 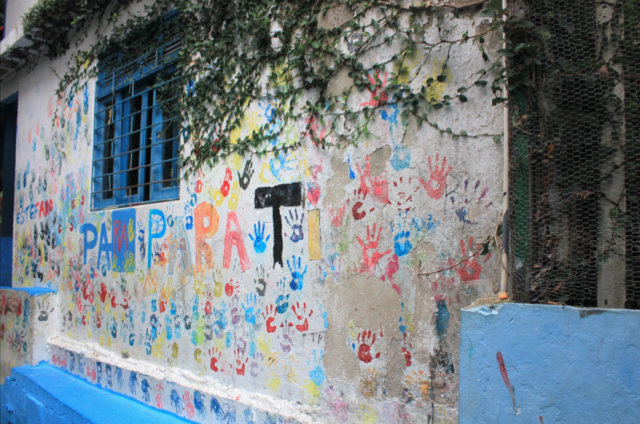 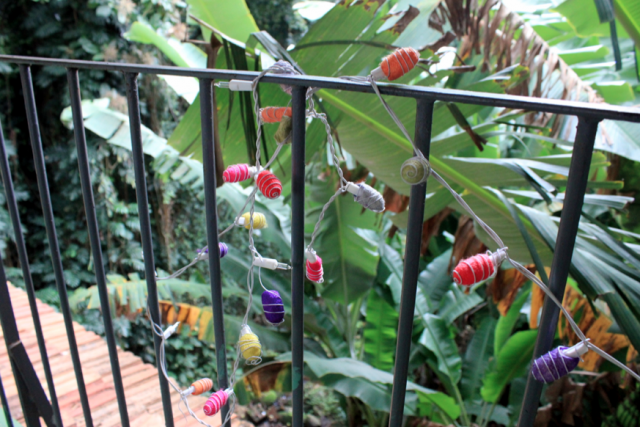 Everything about Para Ti was so alive; brightly painted walls, great areas for congregating, a little shop and classes for the arts. The Vila Canoas favela sign was marked with vibrant mosaics as a welcome to the community. We walked through lots of narrow alleyways and saw people working on their homes, clearly taking pride in where they live. While the area here is tight (you wouldn’t be able to keep any secrets from your neighbors), it was actually very warm. It felt like a neighborhood more than anything; ‘slum’ would most certainly be the wrong word to describe it. 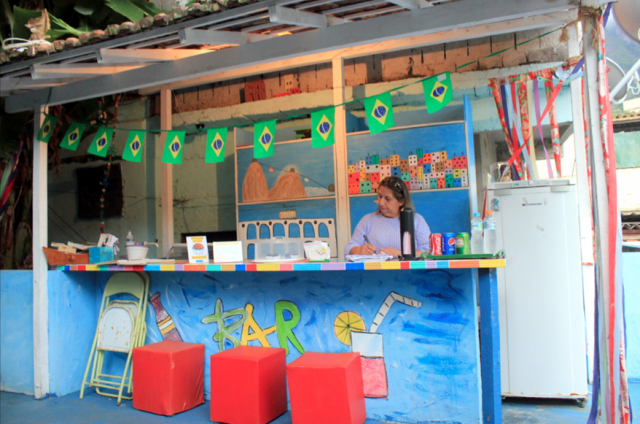 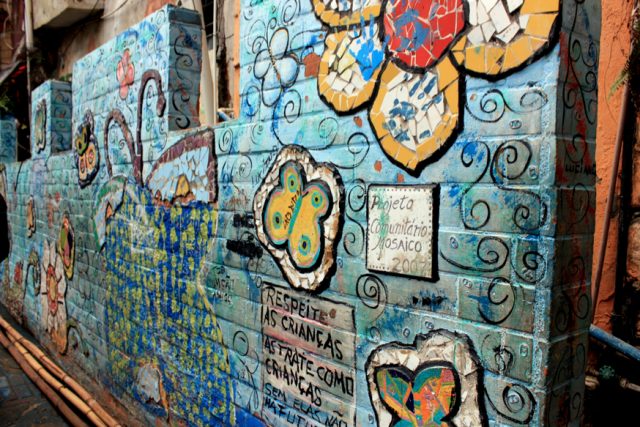 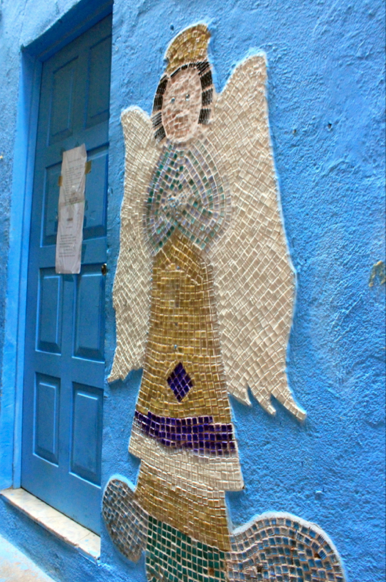 One of the coolest things was this pretty angel mosaic on this bright blue wall. The community members had come together to build/designate a church that they could attend. This room became their church and also functions as a multipurpose center when they need.

What we did begin to realize was that what she had emphasized from the beginning appeared to be true.

We didn’t witness misery or desperation as we wandered the streets. We saw individuals working a range of jobs: bakers, artists, construction, store employees. I didn’t see children – or adults, for that matter –  in the streets begging. From what we had heard, this sounds like a somewhat recent, positive achievement after years of drug trafficking wreaked havoc in some areas.

I should also say that we visited two favelas. There are hundreds throughout Rio de Janeiro alone so I would be doing an injustice if I were to extrapolate the experience here to other favela communities. If these are an indicator of what life is like though, I am optimistic. Rocinha is an absolutely massive favela and I’m sure that there are different ‘classes’ even within the favela itself. There is clearly work to be done to help enhance medical access and educational opportunities (which I think are most important to social and economic development) but seeing just these two areas was a nice way to glean a bit of insight into what a favela is, who the people are, and what life may look like in these communities.

If you’re heading to Rio, I would highly recommend a favela tour to counterbalance what you’ll likely see in other parts of Rio (e.g. cariocas playing volleyball on Copacabana and Rio’s elite having sushi and caipirinhas in Leblon). The Favela Tour company is one of many companies that offer tours like this. This particular tour was R$85 per person. Do know that there were about 12 of us crammed into a van for the journey so if you prefer something smaller or a private tour, be sure to discuss options with the company.

Have you done a favela tour? What did you think? Was your experience similar to ours?

Slovenia: A Food Tour through Ljubljana

GREECE: Your Mini Guide to Paros