After our stint in Iquitos, we loaded up on Aqua Expeditions‘ Aria cruise ship. The boat is home to 16 rooms, 8 on the top floor and 8 on the bottom floor with floor to ceiling windows. Departing from Iquitos, we were set to explore Pacaya Samiria Reserve and local towns amongst a number of set excursions during a 3-day trip. We boarded around 7PM the first night, in time for welcome cocktails, a briefing, dinner and bonding with the 19 other passengers on board. 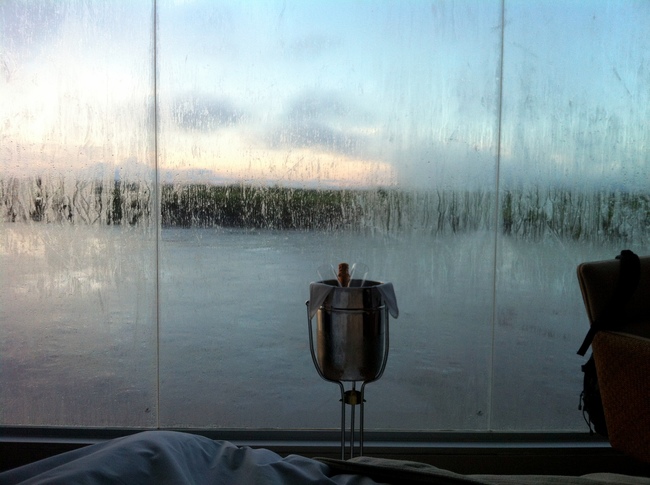 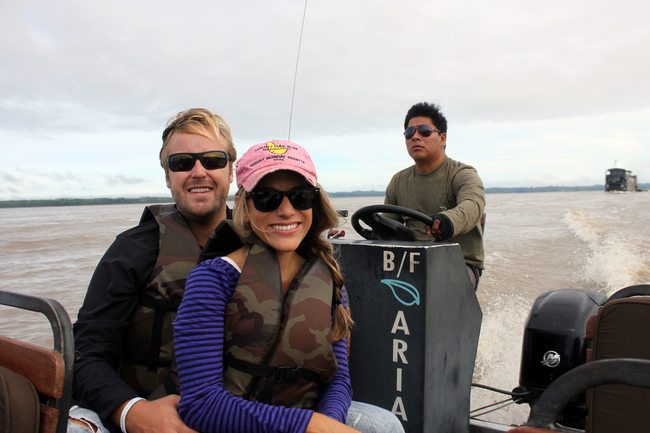 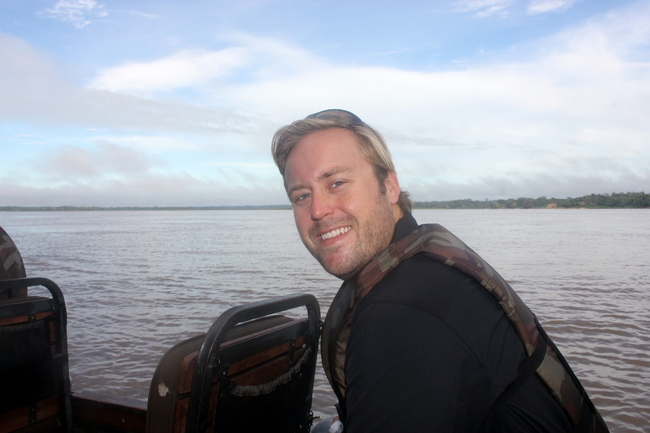 The following morning began our first full day with a 6:30AM wakeup call, 7AM breakfast and 8AM excursion. Our first excursion was a tame one to kickstart our adventures, but was also one of the more fruitful in terms of wildlife spotting. We boarded a skiff with a family of five (also from the Bay Area coincidentally!), and headed out to explore down the Amazon River.

The tour was about three hours in total and took us by small villages and by loads of jungle life. We initially oohed and ahhed about the vultures overhead. In hindsight, vultures were more than a little common; we regularly witnessed groups of vultures circling overhead. There’s no questions about it, though. The Amazon is a birdwatcher’s paradise. We were equipped with some binoculars that we rented from Aqua Expeditions ($25 for the 3 days) which were critical to spotting some of the birds and smaller mammals. In addition to the vultures, we saw a number of hawks, a few toucans and quite a few macaws traveling in colorful pairs overhead.

We ran across a fishing line and nets that were sitting in the water, expertly tied up with empty 2L soda bottles and other household items. We saw a few catfish that had been caught by residents of the local fishing villages. The villages range in size, but a few we ran across were incredibly small; perhaps just an extended family living in homes with thatched roofs and no modern technologies. The children are often also expert fisherman, following their parents out as little apprentices during the day. We pulled up to one group perched on the shore, sorting out fishing lines and nets. The kids sat around, watching the parents and examining us as we pulled up on the skiff. 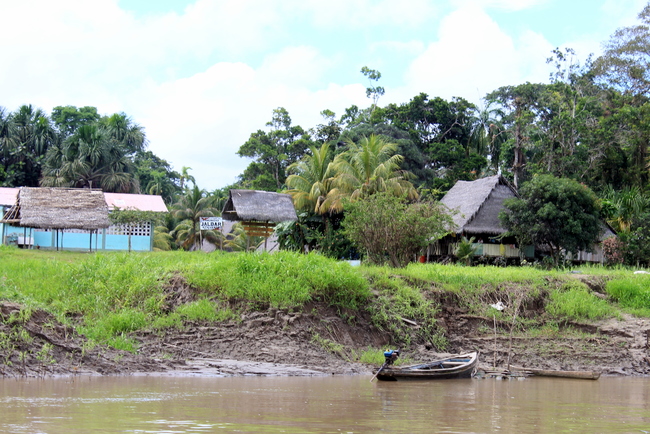 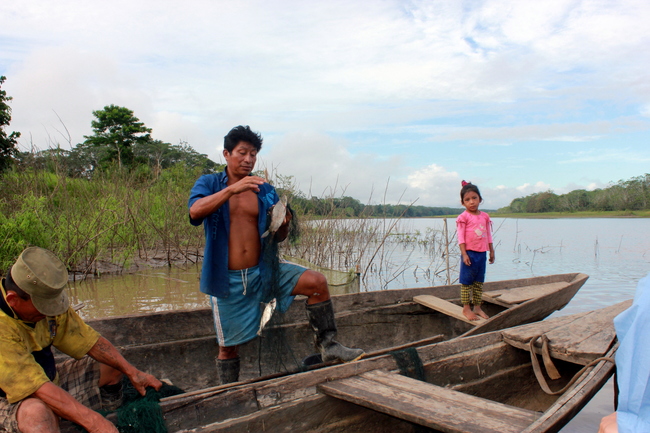 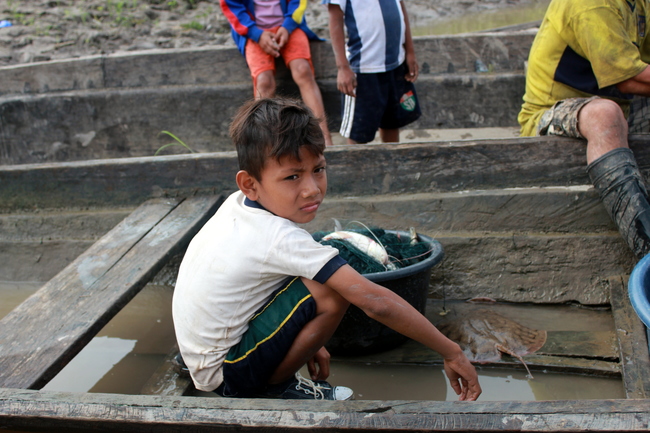 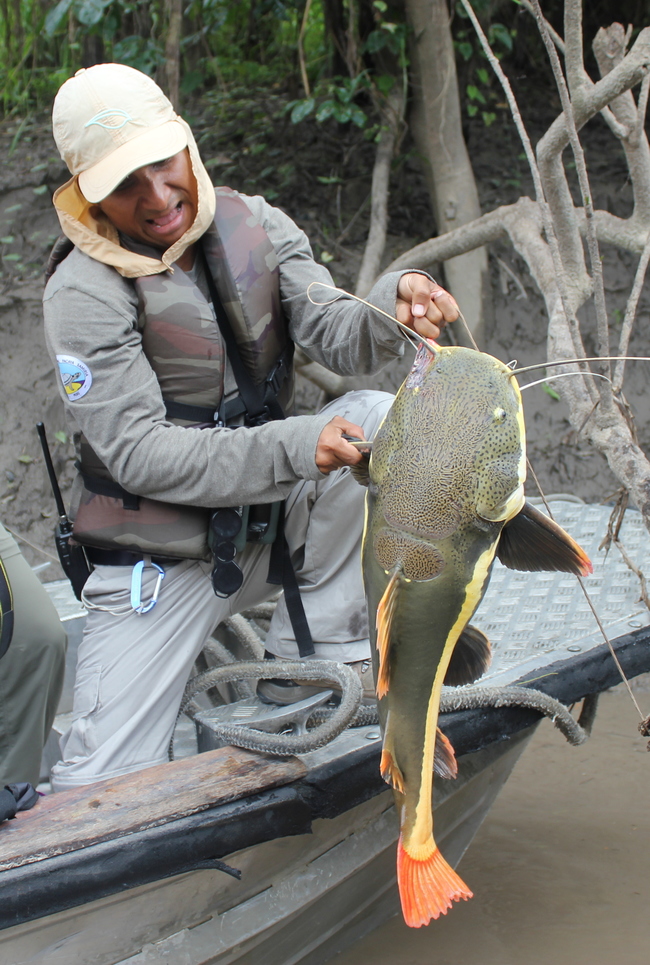 Naturally, nothing is ‘planned’ on an Amazon excursion in terms of wildlife spotting. They provided us with a checklist of animals that we might see during our adventures and the likelihood of seeing a given animal based on high or low season. The guides were great at being able to point out animals from a distance; uncanny really. After departing the small village, we came upon a monkey dancing up in the trees. When we looked through our binoculars, we realized we’d reached a huge group of monkeys, a set of black monkeys and about 3 -5 capuchin monkeys. 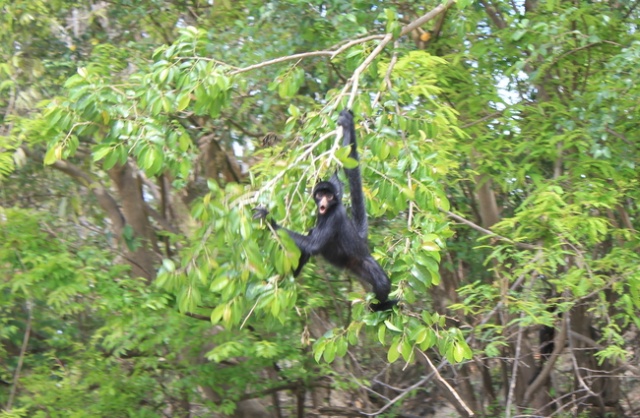 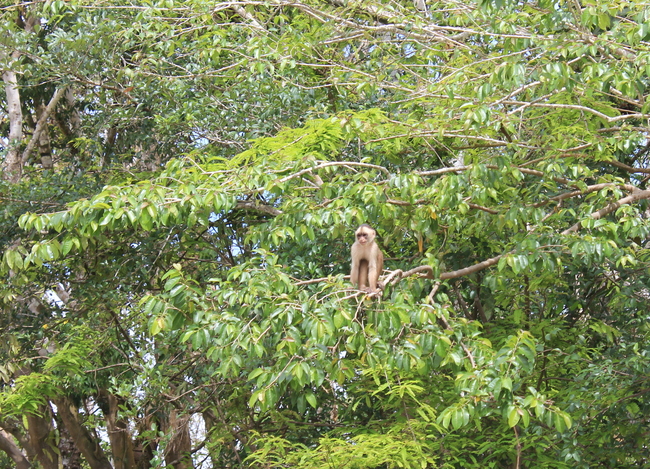 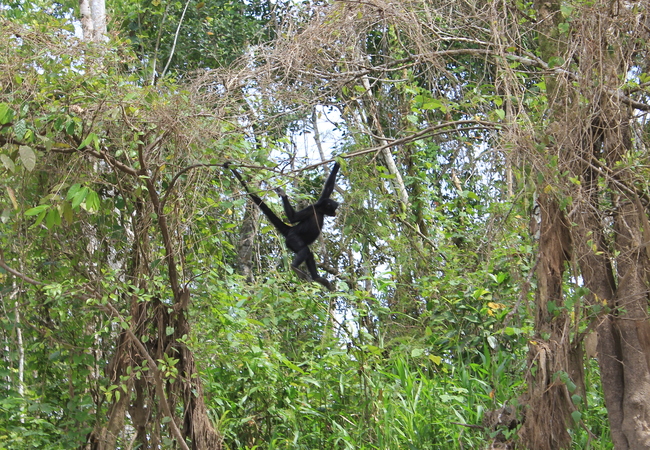 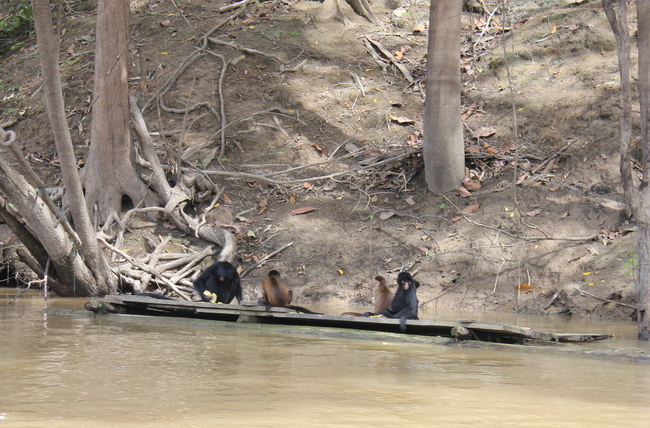 Pretty awesome, right? After a few more spottings, we headed back for lunch and an afternoon siesta before embarking on our afternoon excursion.

Excursion #2: Canoeing and a dip in the Amazon

We embarked at around 4PM for our afternoon expedition where we were going to be canoeing on the Amazon River and potentially going for a little swim in the black lake. Now, I know what you’re thinking: have you seen the water in the Amazon? Sanitary wouldn’t be the first word I would use to describe it. Believe me, every National Geographic clip about parasites and piranhas came to mind, but peer pressure prevailed. Nearly the entire group was excited to take a quick dip in the river (at least they appeared excited), so I was ready to take the plunge, too.

First though, came the canoeing. We made our way to a stretch of river where the normal, murky brown water of the Amazon began to merge with a black water lake. The water is black due to a high concentration of a chemical found inside plants nearby which also cause the water to be much more acidic than the rest of the river (3.5 pH). While black water sounds scary and ominous, it’s actually clearer than the muddy water that makes up most of the Amazon. 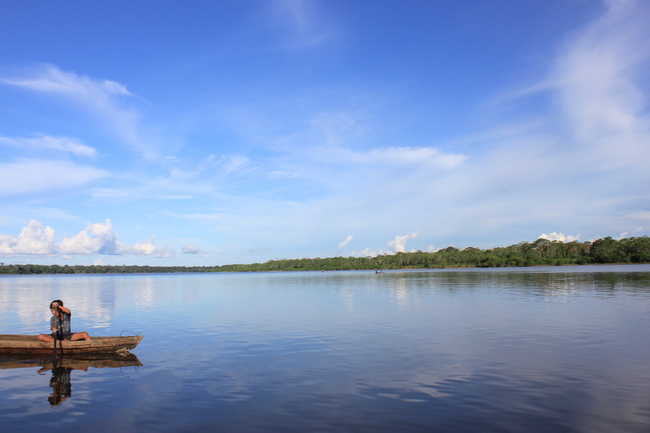 We jumped off of our skiffs and into canoes manned by locals who joined us in canoeing out to the main swimming area. Scott and I canoed with a lovely local named Luz Clarita. Here’s a quick video of us canoeing:

After the canoeing adventure, it was time to take the plunge! I reluctantly jumped in:

After our dip, we air dried on the way back to the ship and caught an incredible sunset on the Amazon. Like many other moments in the trip, it was one of those times where we had to look around and really soak it all in — the Amazon River, the sunset, the clouds, the people, the air. 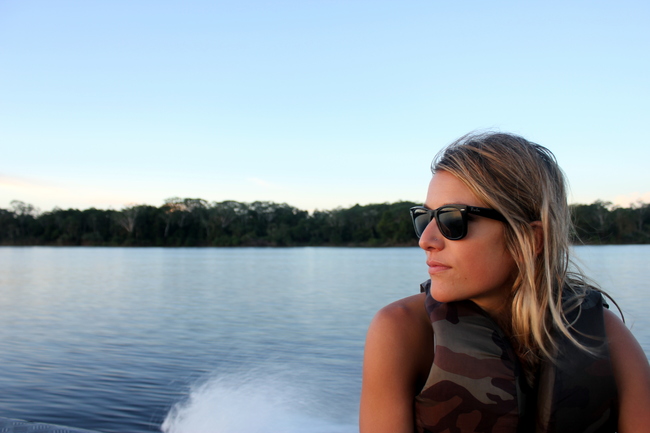 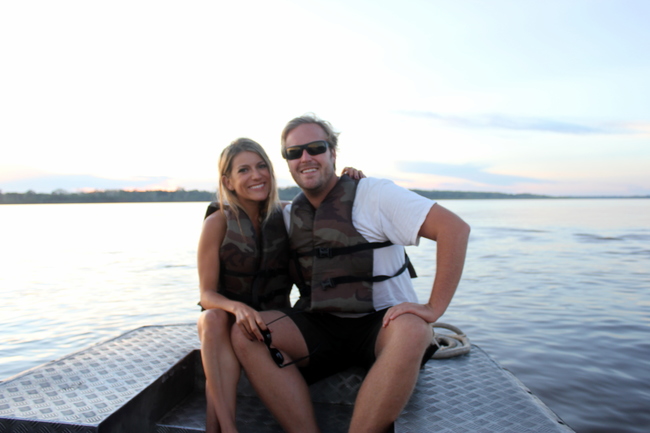 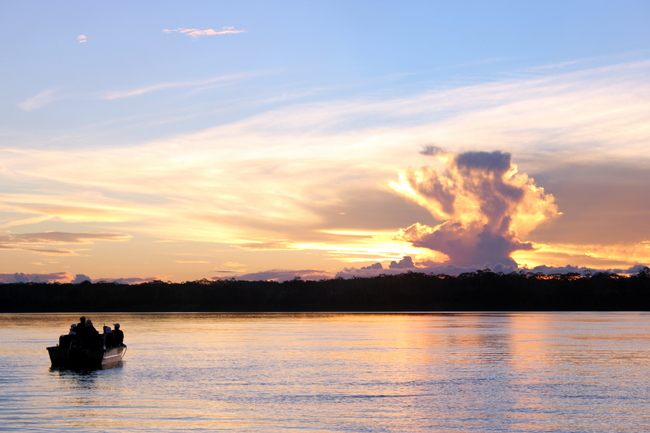 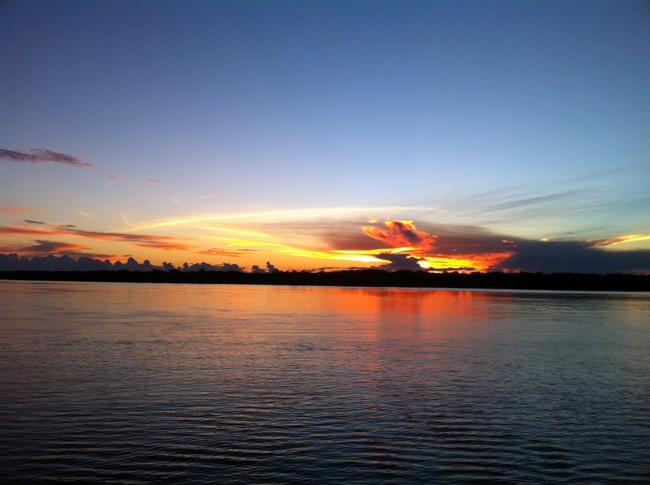 We enjoyed yet another fantastic meal (the food was entirely too delicious on this boat) and headed to bed so we could be ready for another 6:30AM wakeup call and another day of exploring.

Check back as we trek into the rainforest and go piranha fishing!

HOTEL INSIDER: A Stay at The Old Markets, Symi