What Barolo taught me about wine appreciation

What was planned as three weeks in Italy (during COVID no less) unexpectedly turned into two months exploring the country across seven different regions and many cities and towns along the way. We spent five days based in the Piedmontese town of Alba, the heart of the region, ripe for exploring neighboring vineyards of Barolo, Barbaresco, and other parts of the Langhe and Roero. We were there on a mission as part of a project that we’re working on (more on that soon), but part of that objective included delving into regional wine education. I’ve been geeking out in a major way learning about wine, and with the world slowly coming alive at this time, we couldn’t pass up opportunities to taste Italian wines right at the source. While Tuscany has a deservedly huge fan base, oenophiles flock to the home of Nebbiolo, where Barolo and Barbaresco are arguably making the country’s most prestigious wines.

We’ve been studying wine more formally for a few years now, which has made meeting winemakers and tasting unique wines even more exciting. The world is vast, and while I love learning about wines in classes, there’s really nothing like going to the source to really understand wines on their home turf to make it a more tangible experience. 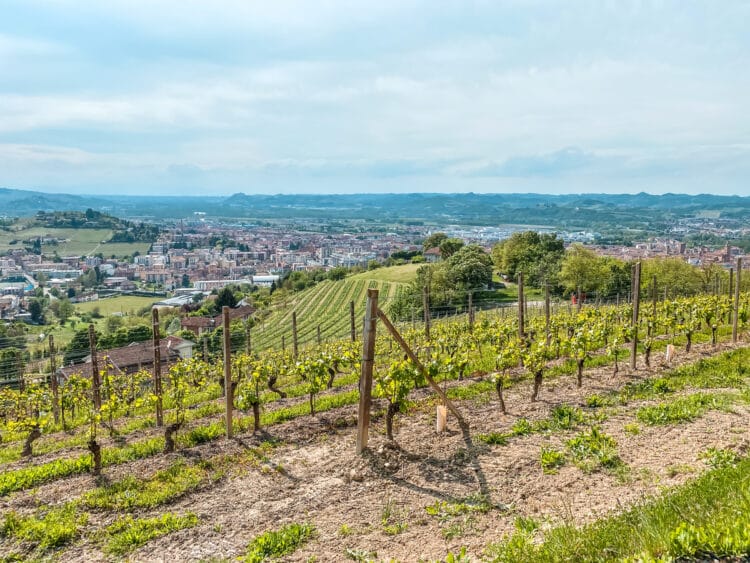 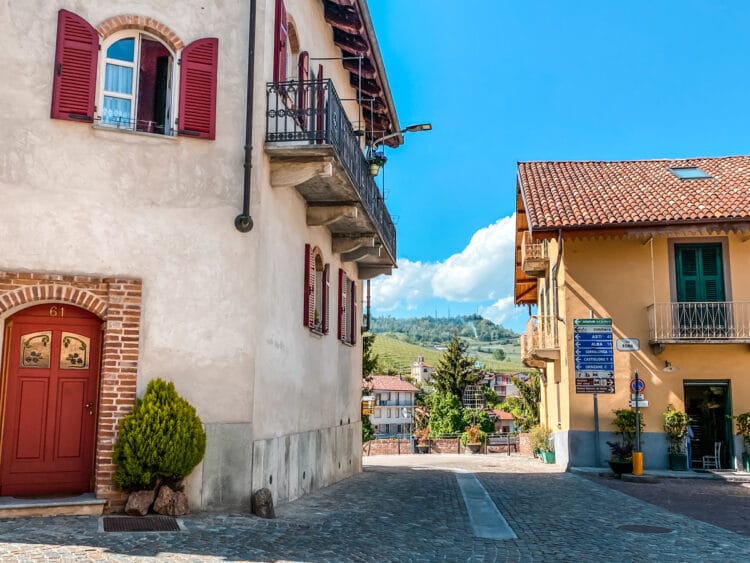 In the tiny town of Barolo sits one of the best wine bars/tasting rooms I’ve been to in a long time: La Vite Turchese. The owners are a husband-wife team with a passion for food and wine that transcends and makes the entire tasting experience amazingly fun and engaging. Their focus is on celebrating all things local, highlighting small producers in a way that makes you feel like you know each winemaker and cheese producer personally. The outpost has a broad selection of wines to choose from but we each opted for a flight of four wines, focusing on Barolo, the wine affectionately referred to as the king of wines. Barolo was being produced all around us as we sat on the streetside in this tiny town and I could tell very quickly what made wine lovers fans of this region’s production.

Barolo is just 35 square kilometers, but there’s a huge variance in what you get from north to south and from east to west across the region due to the differences in soil. To produce Barolo, the requirements are stringent; amongst other rules and regs, grapes have to be grown on the southern slopes of the hills and the wines must be produced from 100% Nebbiolo (which in itself is a feat since Nebbiolo is a pain to deal with), and they have the aging requirements that are outlined for barrel time and bottle time. Until this point, I hadn’t had a ton of exposure to Barolo but I was curious to learn more. I somewhat religiously listen to a podcast called Wine for Normal People, and the host often refers to wines as thinking wines vs. drinking wines. Barolo is a thinking wine. It’s complex, it’s storied, and it’s so site-specific that you feel like an entire Master’s course could be dedicated to learning and appreciating Barolo. 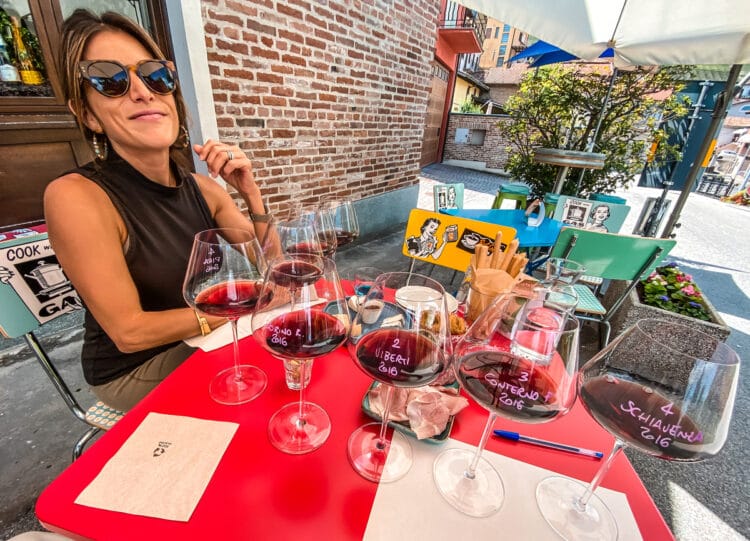 The owner came out with four glasses for each of us, each coming from a different part of Barolo to show different expressions of Nebbiolo based on where the grapes are grown. His wine knowledge was beyond: he showed us a map, talked about the producers and their preferences, and had us instantly enamored with the region. But more than anything, I was just wowed. There are so many things that can go wrong: the growing season is one of the longest in the grape world, with the Nebbiolo grape budding early and harvested late, and the grape needs a super-specific climate to reach its peak form. The vast majority of Nebbiolo is grown in Piedmont where it’s really home-based, and while other regions in Italy (and some internationally) are making a go of it, it’s really a finicky grape to work with.

We were advised to start by examining the aromas side by side for each, then to taste one time through, and then go back and taste again so we could better understand the nuances. The wines were clear, pale, and a bit tawny but strikingly tannic and acidic; a bizarre contrast that was a total brain game. I started, one by one, going through, swirling, sniffing, and sipping round and round, making notes along the way. 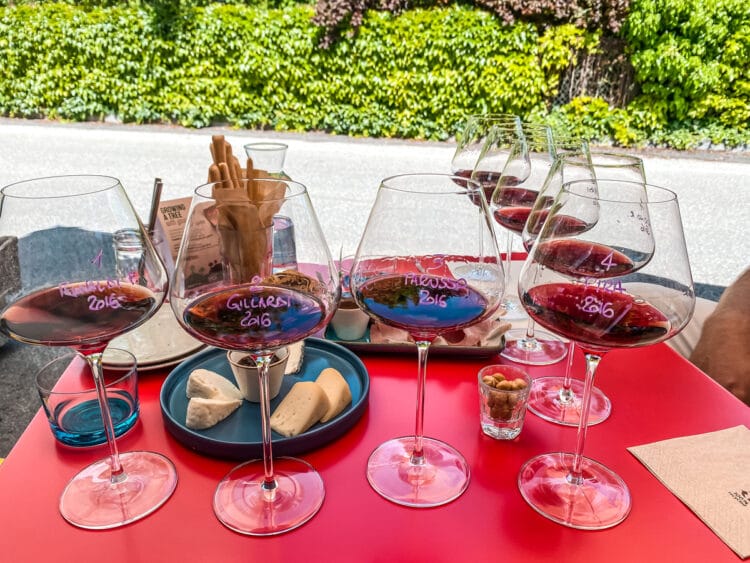 Not a huge fan.

Okay, there were a few exceptions, but let’s just say when we finished the tasting I ordered a glass of Barbera, which my friends at Wine for Normal People would probably refer to as a ‘drinking wine’, not a thinking wine. I liked Barolo just fine but it was far from my favorite and I would never voluntarily order it if I saw it on a wine list. I stared at the glasses, searching myself… these are some of the world’s most beloved and appreciated wines. And, by the way, do you even know how much work the winemaker down the street put into making just 6000 bottles of this? He’s been caring for these vineyards by hand, weathered storms, and managed to put out a wine that embodies the best of Barolo and I don’t like it?!

This was where my aha moment came in, and why I now say that I’ll look back on that day in Barolo as one of the most memorable (and one of the most important) days in my wine education. I truly understood wine appreciation. I didn’t like the wines I was tasting – well, I liked some more than others, which was good to know – but I really, really, really appreciated them. I appreciated the history, the work, and the difficulties that went into production and I appreciated being able to drink a Barolo whilst sitting in the town of Barolo. It wasn’t all lost on me, and while I didn’t leave there as a huge Barolo evangelist, I did leave there understanding how much you can learn and appreciate by wine tasting, even when you don’t necessarily love the wines. Ultimately, what we like is a personal preference. I do think through tasting and education we can learn to like and appreciate different wines, but I also think part of what makes wine tasting fun is our ability to learn what we like and don’t like. If I can look at a wine list and confidently order a glass of wine that I know I’m going to like? I’d say that’s a win. And while you’ll probably rarely see me ordering a Barolo off of a wine list, it doesn’t mean I won’t appreciate the work that went into getting that wine into the bottle for us to access.

We’ll be back in Italy this summer and if we’re back in Piemonte, I’ll most certainly be back at that same wine bar, nestled onto the streetside sipping wines that I may or may not end up loving. But that’s the moral, isn’t it? Whether or not I end up loving the wines doesn’t mean I don’t appreciate the process.

Italy: Journey from Agerola to Amalfi