I was apprehensive when we pushed the ‘Book Now’ button. I hadn’t even been on a motorbike before, and here I was signing up to sit on the back of a stranger’s bike as we zipped through one of Vietnam’s busiest cities. Is that even sane? Maybe yes, maybe no, but as it turns out, exploring Saigon’s food scene by motorbike with XO Tours is pretty much the most fun food tour you’ll ever go on in your life. Their reviews speak for themselves and give uncertain guests (like me!) the confidence to book. Add to the fact that it’s a female operated business, and I was absolutely sold. Here’s how it works: visitors sign up for the tour – $78 for a tour that lastly roughly 5 hours and includes 11 dishes over 5 spots – and get matched with a female tour guide for the night.

Plus, experiencing a night on a motorbike is kind of a must in a city that’s widely considered the world’s capital of motorbikes. In a city of around 9 million people, there are roughly 7.5 million bikes. Why not get a quick taste of the city’s main mode of transportation? 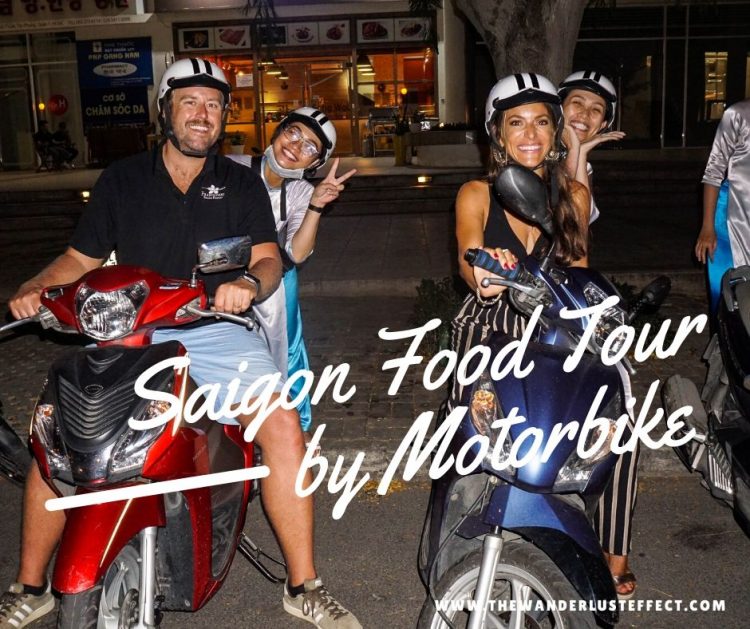 I’m about the size of an average Vietnamese woman, but if you’re at all concerned about being too big to have a petite woman take the reigns, don’t fret. My husband, who was roughly twice the size of his driver, had zero issues. These ladies have been riding motorbikes their entire lives and go through a pretty rigorous weeding-out process to make the cut. Driving is part of the equation, yes, but sparkling personalities and great English skills are clearly the other part.

Both of our guides – and all of the ladies we encountered – spoke perfect English and were so fun and bubbly. Your guide is more than just a driver; she’s really your best friend for the night. Ngoc and Hong, Scott’s and my drivers (respectively) picked us up at the Le Meridien Saigon right on our home turf and we set off on our adventure. I had never been on a motorbike in my life but it only took a couple of minutes to get comfortable with the balance, the flow, and the other scooters whizzing past. By the time we arrived at the first stop, I was already having a blast. Surely we should own a motorbike at home, right? These things are way too fun to not be my primary mode of transportation.

During each leg of our journey, Hong provided insight on what we’d just eaten, what we’d just seen, and where we were off to next. It was the perfect opportunity to ask questions, not just about the food scene in Vietnam, but about life in Vietnam. We were partnered up for five hours so by the end of the night I felt like I was saying goodbye to a friend.

The food was plentiful and the company was great. As you’d imagine, the company goes beyond your guide and extends to the group that’s joined for the adventure. Motorbike tours max out at around 16 people and our evening was on the busier end during our visit in September. So, who’s the typical traveler on a tour like this? Well, there is no ‘typical’ as it turns out. I expected our group to be primarily adventurous twenty and thirty-somethings but I was only partly right. Beyond Scott and myself, there was a mother/daughter duo (teenage daughter), two middle-aged couples traveling together from Australia, and two couples in their late twenties/early thirties from the US. The tour is really suitable for a broad range of travelers with an adventurous spirit wanting an authentic experience. I had originally thought that kids and elderly travelers may be the exception, but it turns out that XO Tours accommodates the gamut, with their oldest passenger being a 91-year-old traveler! Anyone with mobility or joint issues may want to reach out to verify whether the tour would work.

What about the food? 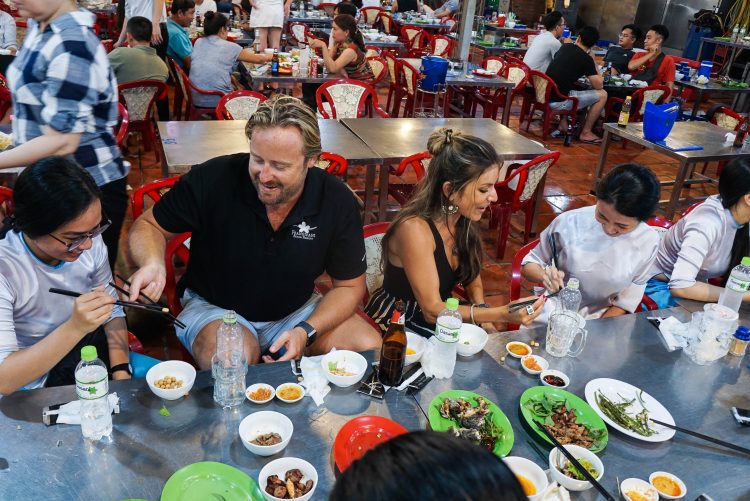 At its essence, this is a food tour (though it feels like much more), so the natural question is what’s the food like? If I’m being honest, Vietnam as a whole left something to be desired as far as food went. I love Vietnamese food and grew up in an area with a sizable Southeast Asian population (Vietnamese specifically) where we were lucky enough to enjoy regional cuisine regularly. Generally speaking, the food we had while in Vietnam wasn’t as vibrant as I’d imagined it being. This food tour was a great counter to our other experiences in the country though and brought some of the best local cuisine we tried during our two weeks in Vietnam. It also offered us opportunities to try unique local bites that we hadn’t been exposed to at home (like balut, which Scott gallantly tried for our team). 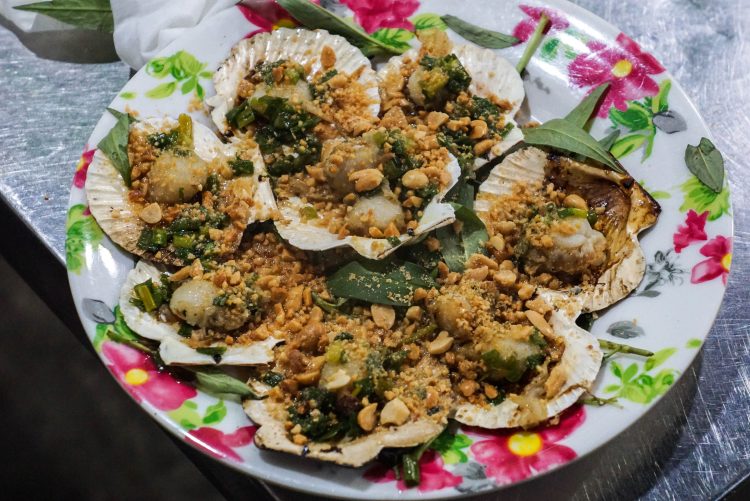 And for those with dietary restrictions, XO Tours manages it perfectly. I don’t eat meat and much of the local cuisine uses beef broth or meaty inputs in their food. They were aware of my diet and had options for me every step of the way. Our meeting point brought a vibrant bowl of noodle soup; a beef version for the group and a veg-friendly version for me. We stopped at a local Vietnamese BBQ spot which involved family-style service, serving up a slew of veggies and grilling up prawns at the table. Our guides doubled as our chefs, grabbing perfectly-seasoned bites of seafood, laying them on a tiny grill in front of us until they were ready to eat. Other stops included vegetarian-friendly bites and the crème de la crème in my book, the scallops, which were the most memorable bite of the night for me. 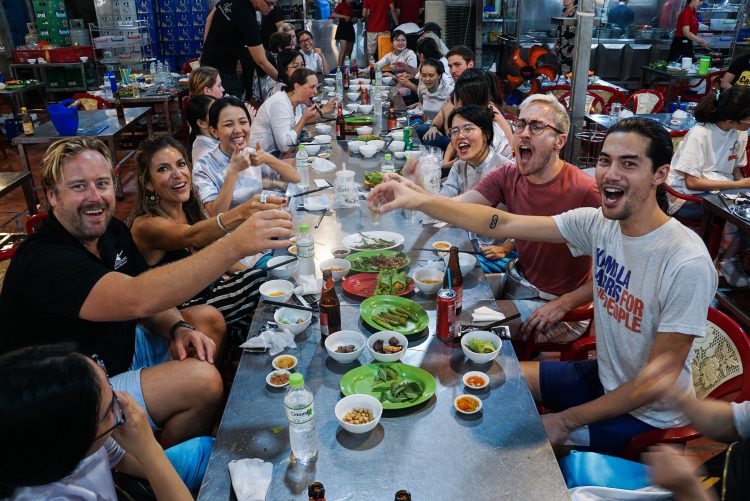 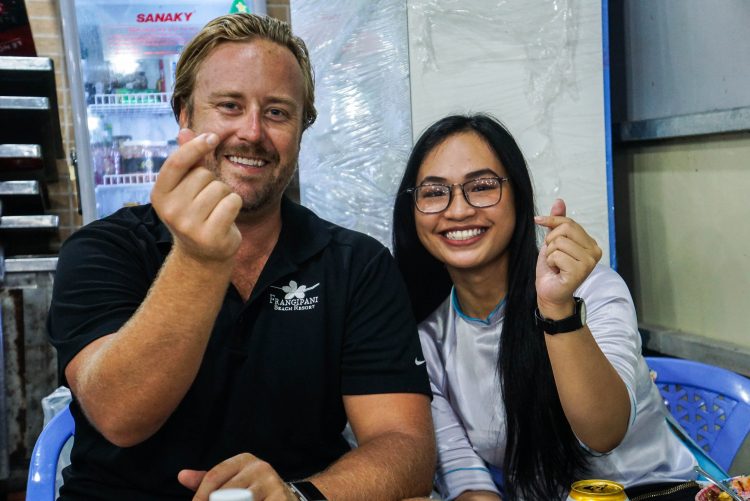 For those curious about the length of the tour: yes, it’s about five hours, and it absolutely flies by. I’d originally raised my brows a bit about a five-hour food tour, but as I mentioned above, it’s so much more than a food tour. It’s a food tour couched inside of a broader tour of Saigon. I found the transit times between spots, sitting on the motorbike chatting with Hong, just as fun as the stops where we were actually dining.

By comparison (in the context of Vietnam), the tour is a bit of an investment at about $78 per person but is absolutely worth every penny. As the tour came to an end, we were escorted back to our hotel for the night along with another couple who was based at the Le Meridien as well. We all agreed that it was one of the best tours we’d ever done in our travels. Truth be told, as far as a tour experience goes, it could very well be the single best tour we’ve done during our travels. The entire evening is perfectly orchestrated with thoughtful stops, great cuisine, incredible guides, and brings a unique local layer that makes it extremely memorable. I mean, how many opportunities do you get to zip through the streets of Saigon on the back of a motorbike? We were also fortunate that our primary tour leader for the night, Ming, doubled as our group photographer and graciously shared photos from the evening with us. As you can imagine, trying to snap photos or videos while riding on a motorbike is ill-advised for newbies so we took virtually zero photos during our tour. Thankfully, Ming shared snapshots from most of our stops during our evening to help fill the void (very much appreciated)!

All in all, a perfect finale to our time in Vietnam and perhaps our most memorable evening during our month in Southeast Asia. ?

Have you ever done a motorbike tour? Would you?

How to Spend One Day in Stockholm