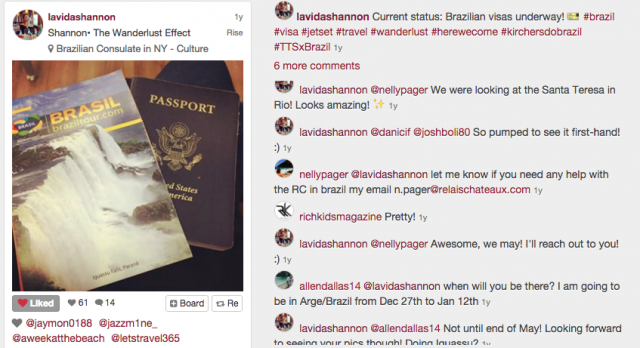 Yeah, not so fast. Many people who hadn’t visited Brazil (or hadn’t looked into it) didn’t realize that Americans even need visas to enter the country legally. You do, and they can’t be handled at the border. $160 per visa in the form of a money order, plus a visa application that needs to be filled out and submitted online, plus an appointment at the embassy to get everything processed.

Scott and I scheduled a visit to the Embassy of Brazil in New York during our time in NYC in December. Documents in hand and freshly printed passport photos prepped, we approached the window, anxiously awaiting the visa processing. Visa processes are handled differently around the world: some don’t require visas at all, some allow visitors to acquire a visa upon entry to the country for a fee (this was the case in Jordan, Kenya, Turkey, etc.), some allow an eVisa process, some require a visa in advance that can be processed same day, and some take a much longer time to process. Apparently Brazilian visas take a while to process.

I’ll be honest, Scott and I felt like novice travelers sitting there with the representative as she explained that no, we wouldn’t get the visas the same day, and that yes, we would have to leave our passports at the embassy for roughly three weeks for the visas to get processed.

THREE WEEKS?! Lady, we’re going to Brazil on an eight day vacation, I’m not trying to open a business there! Though we already understood this factoid, she explained to us that the visa requirement for entering Brazil as an American is a show of reciprocity. Brazilians are required to acquire visas before entering the United States and the cost is — you guessed it! — $160. For other nationalities, the visa fee is significantly lower, if it’s required at all.

Well, shoot. What now? She suggested we follow up with the embassy in Miami which would likely be the location we’d go through as residents of Anguilla. This was our biggest conundrum: we live on an island wherein any real movement requires a passport. If we go to neighboring St. Maarten to pick up supplies – a mere 20 minutes away – we need a passport. If we had to actually go to Miami to process a visa, we’d have to stay in Miami until the visa was processed since we couldn’t actually return home without a passport. 5 – 10 or more days in Miami to get a visa to go to a place for 8 days?! None of this made sense.

I spoke with the team in Miami. Mailing in our passports wasn’t an option; we’d have to be present – us, not a third party – to ensure the visas could be processed. After explaining this, they also informed us that as residents of Anguilla, we’d probably fall under Barbados’ jurisdiction.

Score. This was turning into quite the run around but I was finally getting somewhere.

After reading Barbados’ rather convoluted website and trying to figure out this process, it was clear that residents of Anguilla would fall under Barbados’ umbrella, and that we could, in fact, send our passports in as part of a ‘third party’ option. Instead of the $160 per person, the price would be $201.02 per person, but that additional $40 was a heck of a lot cheaper than a flight to Miami or Barbados.

So, with applications filled out, money orders processed, passport photos taken, bank statements produced (they require this to show that you can sustain yourself while in country), and original documents gathered, we FedEx’d our most prized possessions – our passports – to Barbados for processing (a $90 FedEx fee, mind you, for some lightweight docs to be shipped to the Southern Caribbean). So, $500 later, we’re thisclose to finally having our Brazilian visas. On the bright side, these visas should be good for a 10-year period which means there’s a fair likelihood that we’ll be visiting Brazil again within the next decade (gotta make these visas worth it!).

Moral of the story: know the legal requirements for entering a country when you’re planning a trip, and do not underestimate the time it will take to get everything processed. Scott and I have done a fair bit of international traveling and have dealt with visa issues before (in a number of capacities), and we felt like utter amateurs this time around because we took for granted our status as American citizens. We tend to think that with a US passport, we can easily be granted access to any country by flashing our photos and putting down a few dollars for an entry stamp. Not always, guys!

Do you need a visa?

Planning an upcoming international trip? If you’re traveling within North America or to Europe or South America, you’re probably okay for the most part (there are a few exceptions, like ours). If you’re traveling to Asia, the Middle East or Africa, there’s a decent likelihood that you’ll need to secure a visa, either in advance or at the border. The following countries require visas for American travelers, to be acquired in advance (this list is ever-evolving and is probably not inclusive of all countries, though it represents the majority). Some smaller territories require documentation of their own to enter legally (e.g. places like Crimea):

Have you run into any visa issues in your travels? Have you ever been turned away at the border?