Ultimate Experiences in the BVI

We just returned from a weeklong escape to the British Virgin Islands where we spent three nights on land and four nights exploring islands on a dreamy 59′ yacht. With our home base in Anguilla just a few islands east of the Virgin Island chain we’ve visited the region a couple of times before (see more on our VI adventures) but only briefly. This trip, with my family and brother-in-law along for the adventure, we made it our mission to really delve into the BVI, taking in offerings by land and by sea. The week brought a host of quintessential Caribbean experiences, from indulging in water sports to delving into some of the natural wonders in the British Virgin Islands. To kick-start my recap of our adventure, I’m sharing a round-up of some of the ultimate experiences in the BVI – they’re all worth putting on your radar and I’ll be sharing more on each island in a series of upcoming posts from our getaway.

Explore the Baths on Virgin Gorda 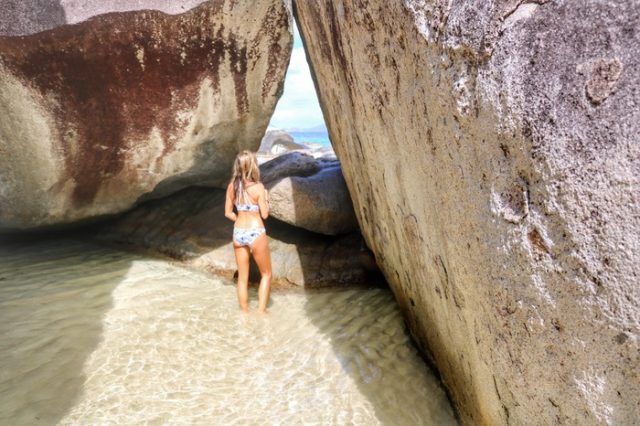 1Perhaps my most anticipated stop when we were crafting our BVI island hopping itinerary, The Baths are well-known the world over for their jaw-dropping beauty and otherworldly qualities. When it comes to natural wonders, The Baths take the cake in the Virgin Islands broadly, and are one of the most beautiful natural sights that I’ve seen first hand. The views are stunning and the boulders are a veritable playground for adults to climb, jump and swim while exploring. We visited on a red flag day so we focused our time on the rocky maze, but there are snorkeling opportunities nearby on calmer days.

This won’t come as a surprise but as Virgin Gorda’s largest draw, The Baths are a hotspot for tourists and the area can quickly get crowded with visitors coming in by land and by sea – including many travelers off of cruise ships. Go as early as you can to avoid being bombarded and to allow yourself a bit of space for uncovering secret pockets of this stunning boulder-laden landscape. 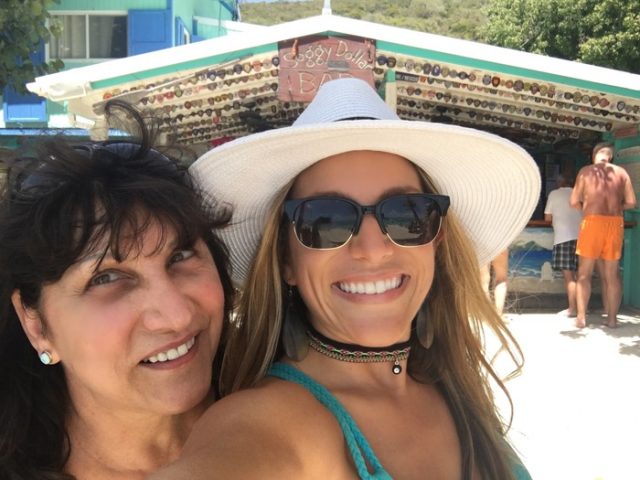 2When it comes to the most famous attractions in the BVI, The Baths may very well share that title with the islands’ famous beach bars. There are a handful that continually draw crowds but for a daytime bar scene head to the Soggy Dollar Bar, one of the most famous – if not the most famous – beach bar in the Caribbean. Located on White Bay, a stunning stretch of beach on Jost van Dyke, it’s a hotspot for visitors looking to escape with a lounge chair and a painkiller. The concoction, essentially a piña colada on the rocks with a few other inputs, has been recreated throughout the Virgin Islands but Soggy Dollar boasts the original, and ordering one (and taking home the plastic cup) is practically a rite of passage.

Paddleboard with Turtles at Cooper Island

3Our boat was equipped with paddleboards and I made it my personal mission to make sure they got their fair sure of use with my daily SUP sightseeing tours of coastlines. I boarded to explore the coastline at Norman Island and the beach scene at Peter Island, but most notably my paddling happened at Cooper Island, where the ever-present seagrass creates a perfect home for sea turtles. Our boat captain mentioned his past experiences tagging turtles at Cooper where he told us we would have the best chances of spotting one. Sure enough, a turtle guided us in as we grabbed a mooring in front of Cooper Island Resort, and as the day wore on we saw around a dozen from our top deck. Not content with spotting them from a distance, I spent time paddling out to see them up close and returned to sea with snorkeling gear to watch a couple of turtles dive around under water. For nature lovers, the turtle scene at Cooper Island was the best we saw and the protected area provided the perfect conditions for swimming, paddling. and kayaking.

Wake up with a Dip at the Indians 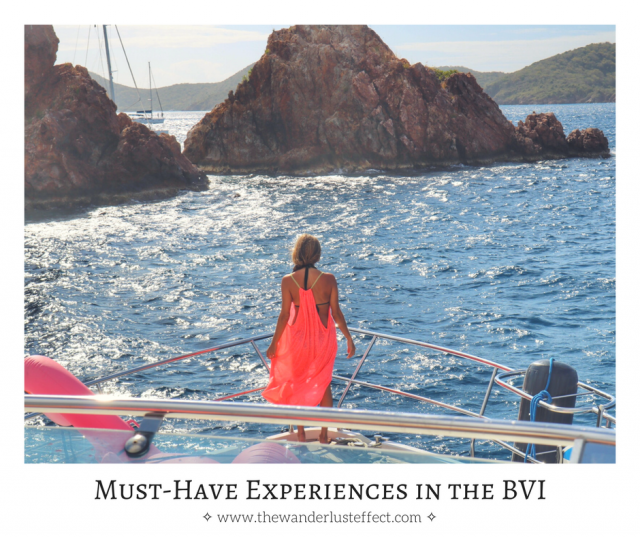 4The Indians are an interesting attraction. If you haven’t visited the BVI or researched a trip to the region, there’s a solid chance that you’ve never heard of them. Once you’ve begun planning your trip and experiences in the BVI though, the Indians quickly climb up the list. An outcropping of four stunningly beautiful rock formations near Norman Island, our captain shared that he found that the Indians to be the best snorkeling spot in the entire BVI. During our morning scheduled for snorkeling the area we left our previous mooring at Norman Island bright and early (around 6:30AM) to make sure that we got one of very few moorings available near the Indians. To wake up to these beauties was an eye-popping moment for me. No doubt, our snorkel was spectacularly beautiful, but the raw beauty of the formation alone is enough to draw a crowd.

Snorkel the Caves at Norman Island 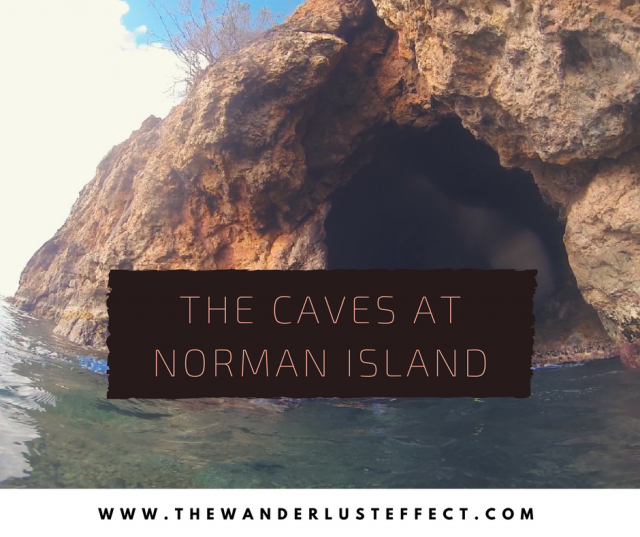 5Yes, yes, more snorkeling on this list because let’s face it: if you’re boating in the BVI, the underwater world is half the draw! My parents said it best towards the end of our yacht charter after watching as I spent hours snorkeling, swimming and paddleboarding: “I never knew you were such a water baby.”

To be honest, neither did I. Sure we live on a Caribbean island, but we never take the opportunity to really enjoy the sea quite like I did during this getaway. I developed a much deeper love for being in the water, and our snorkeling stop at Norman was one of the first moments to clinch the deal for me. Calm waters, incredible sea life, and caves that are said to be the basis for Treasure Island were the perfect backdrop for our first memorable snorkel trip. The pirate history that many associate with the Caribbean is richest in the Virgin Islands, and the history of Norman Island in particular will have water lovers and history buffs alike fawning over the site. 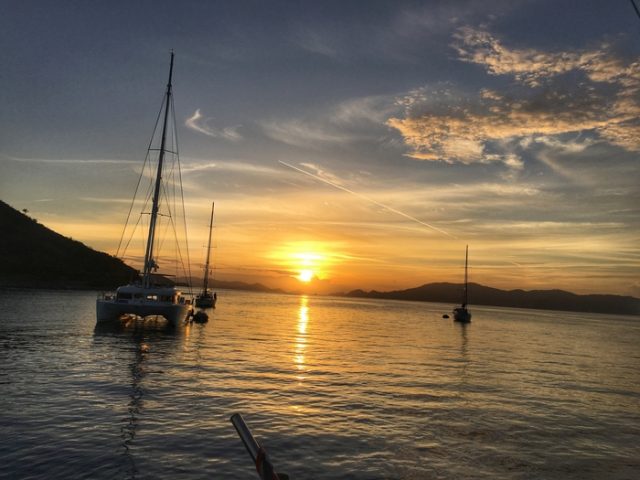 It’s simple enough but it captures the essence of the BVI; nothing pretentious, nothing extravagant, just elevated versions of life’s simple pleasures.

6One of the simplest pleasures as far as experiences in the BVI go, taking in nightly sunsets and stargazing after nightfall were incredibly memorable for us. Bobbing out at sea with nothing obstructing our views of the horizon, we were able to take in a few mesmerizing sunsets, and collectively spent our final night stargazing while Captain Malcolm pointed out constellations in the night sky. When I dig into my memories of the most beautiful nights I’ve encountered – clear with an unimaginable sea of stars – this takes its place amongst the top three (Yosemite and Tsavo East in Kenya take the other two spots). In four days, I watched stars shoot across the sky, watched one peaceful sunrise and a host of colorful, fiery sunsets. It’s simple enough but it captures the essence of the BVI; nothing pretentious, nothing extravagant, just elevated versions of life’s simple pleasures. Mission accomplished.

For other BVI lovers out there, what are your must-have experiences in the region?

An ATV Tour of Mykonos