While cities like Florence, Venice, and Rome still dominate visitors’ minds when thinking of Italian escapes, the southern region of Puglia is an up-and-coming gem with a spattering of amazing cities that have grown in popularity in recent years. With a few months based in Italy, we finally made the journey to the heel of the boot to spend one week in Puglia focused on exploring the region’s iconic towns. If you’re considering spending a trip focused on Puglia, you’d look at flying into Bari airport which is the gateway to the region. The Brindisi Airport (BDS) also has flight connections from mainland Europe, often through RyanAir, depending on your point of origin. Alternatively, if you’re adding on a week in Puglia after a broader Italian exploration, you may consider taking a fast train from Roma Termini to Bari (about 4 hours) and can rent a car from there.

We chose to base ourselves in the town of Ceglie Messapica in a private villa but charming boutique hotels and B&Bs are available throughout the region. One week in Puglia could take many forms but I’d suggest one strategic home base that you can reasonably use for day trips. If you’re staying in the region for longer, you may consider splitting your stay between two or three points to dive deeper into different towns. 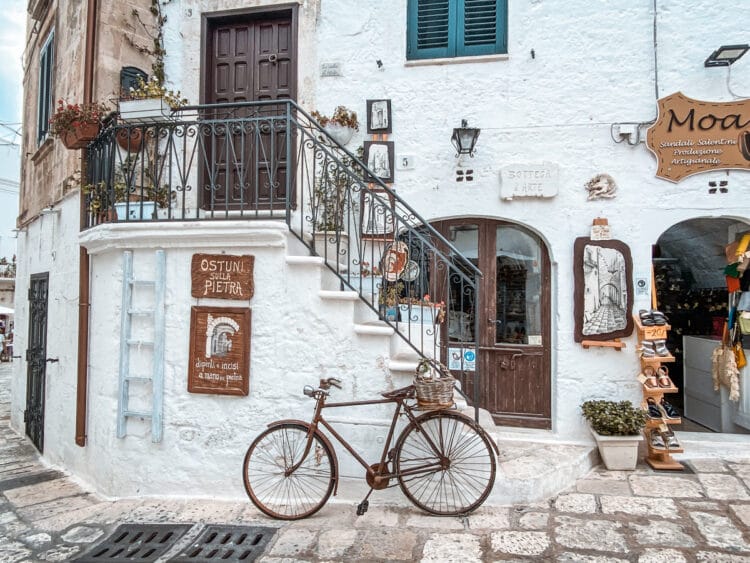 Welcome to Ostuni, La Città Bianca (the white city), a town that’s a must on most travelers’ itineraries when traveling to Puglia. Ostuni is a labyrinth of whitewashed streets with a primary vein that works its way through with shops, restaurants, and specialty stores. When you’re visiting Ostuni, use the main piazza as your gauge and starting point if you’re unclear of where to ‘start’. From there, you’ll have a main street (largely pedestrianized) that travels up where you can meander the streets and find a place for a drink with a view. 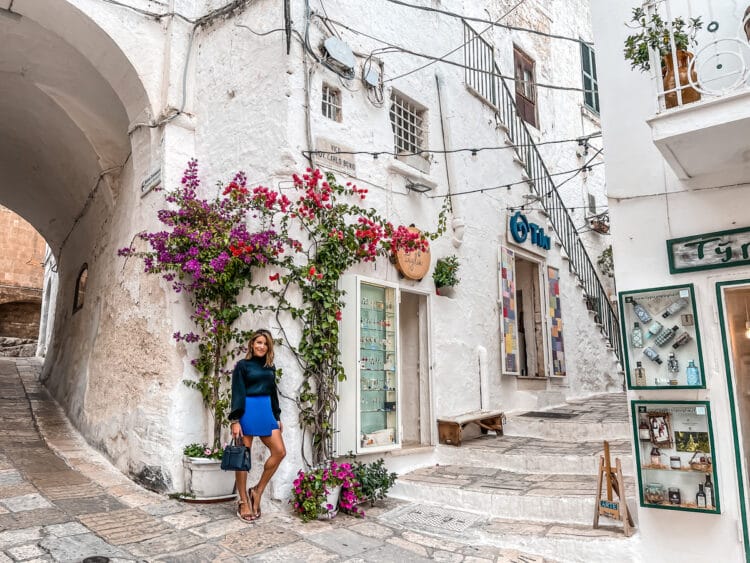 Keep in mind that Ostuni is a small town so it’s a half-day excursion including enjoying lunch or a drink. In terms of sightseeing in Ostuni, the Duomo di Ostuni is on the list of ‘sights’ but the town is really what you’re there to explore without any true objectives beyond wandering the maze of city streets and exploring hidden corners.

One of the first things you’ll notice in Puglia – not unlike Malta! – are the prickly pears (fico d’India) that dominate the landscape. They’ve become a de facto symbol of the region and you’ll see them everywhere; both in real life and also in souvenirs that memorialize this area. Expect prickly pear ceramics, prickly pear scented candles and perfumes, prickly pears printed on aprons and tea towels, and prickly pears featured in jewelry. On that note, for jewelry lovers, Buongiorno Puglia is a charming store worth visiting in Ostuni. I bought prickly pear earrings here (naturally), and much of the jewelry is handpainted by two sisters, the daughters of the man who runs the shop. 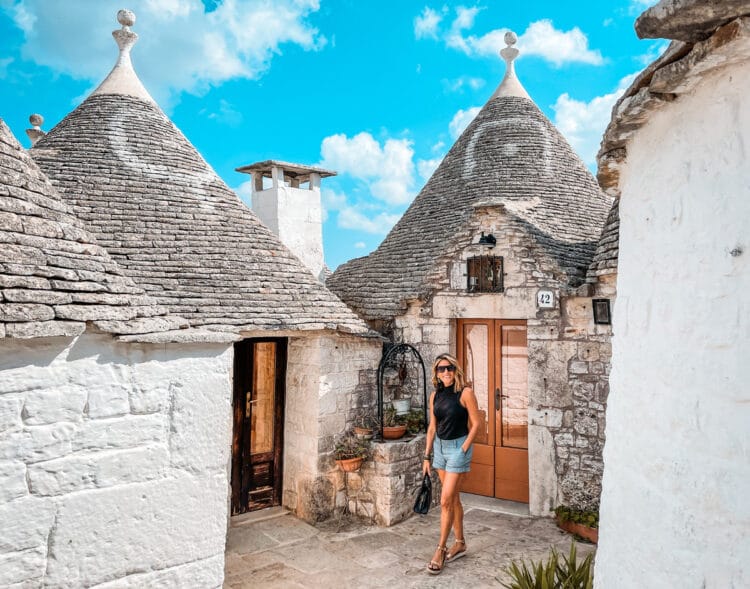 If I had one week in Puglia and could only visit a single town, Alberobello could very well be it. You’ve likely seen photos of Alberobello before with its unique Trulli dominating the landscape. The entire scene feels like a fairytale and makes it one of the most unique towns in the region. The Trulli (singular: Trullo), recognized by UNESCO, and are stone huts with conical roofs and they’re everywhere in Alberobello, with an entire section of the town made up entirely of Trulli. I’d personally allocate the better part of a day here for wandering the town, shopping at local outposts doling out local products and crafts, enjoying lunch, and sitting down for a drink with a view. Bring your camera — Alberobello is arguably the most photogenic town in Puglia!

👉🏼 Musts in Alberobello: Spend a few hours exploring the town of Trulli 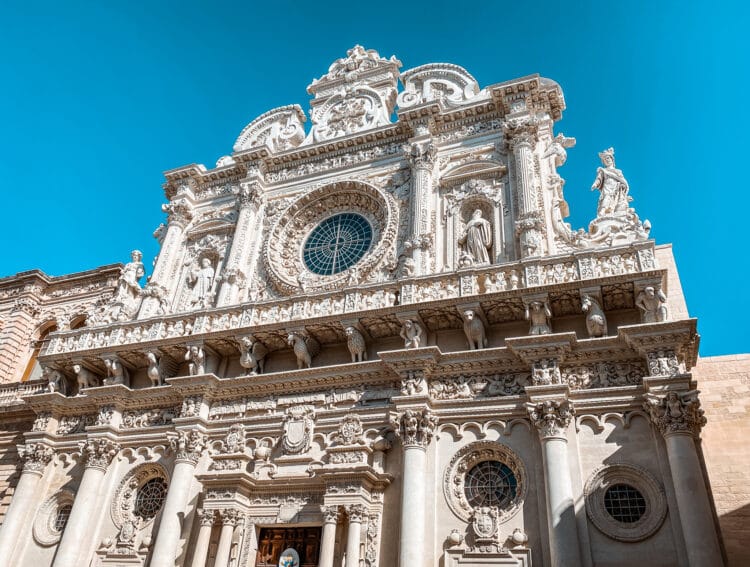 Lecce gets a lot of love from visitors and is better to be thought of as a small city vs. a town. Lecce is a Baroque city with romantic palazzi and facades composed of the limestone that’s ever-present in the region. I’d often heard of Lecce referred to as the Florence of the South, and while Lecce has its own charm and beauty, I personally think that’s a lofty comparison. With one week in Puglia, Lecce is a great place to include in an itinerary as it’s a primary hub in Salento but I think it’s better to enter without mental comparison to other famous Italian outposts.

Lecce certainly has sights to see (the Duomo and the Basilica di Santa Croce, for example), but being in Lecce is more about strolling the city streets and enjoying the simple pleasure of just meandering and discovering. You’ll find enotecas and restaurants alongside charming shops throughout town and to have a day in Lecce means popping in and out of storefronts at leisure and enjoying a long lunch of local favorites alongside local wine and olive oil. Puglia produces around 40% of Italy’s olive oil and that won’t come as a surprise after you’ve driven the region with a landscape dominated by prickly pears and olive trees.

👉🏼 Musts in Lecce: Don’t miss the Piazza del Duomo — the Duomo dates back to the 12th century. For wine lovers, find a wine bar and try the Salice Salentino, a red wine native to Salento. 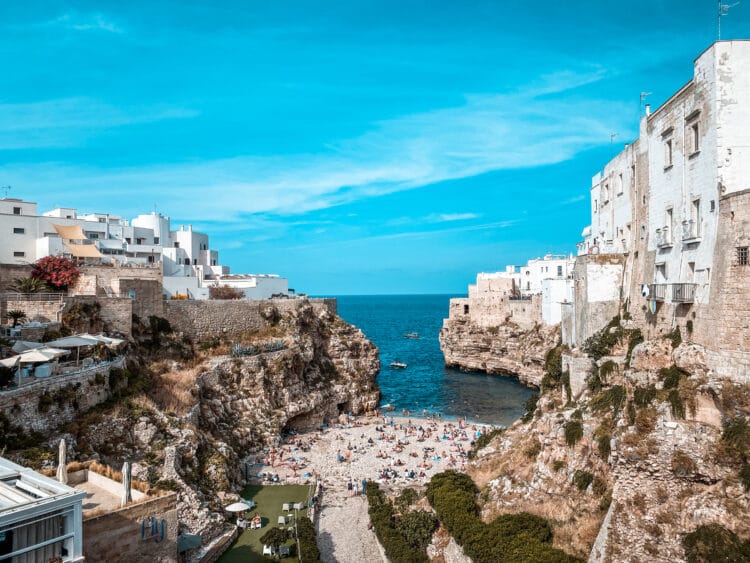 Polignano a Mare is arguably one of the most well-known towns in Puglia and with these stunning views, it’s no wonder why. This seaside town has some beautiful shops and restaurants, coastal vistas, and provides opportunities for swimming and boating if you’re so inclined. The real beauty, as with so much of Puglia, is less about sightseeing and more about meandering and taking it all in. With a week in Puglia, you could dedicate an entire day to Polignano in the heat of summer when you can better enjoy beach time and boat days. In the shoulder seasons, you can split your day between Polignano and nearby Monopoli.

For those inclined to spend a day at a nearby beach club, Coco is in close proximity to Polignano.

👉🏼 Musts in Polignano: Don’t miss the ever-present octopus sandwich in Polignano! I mean, why isn’t this a thing everywhere? La Pescaria is an institution — the line is long but the food is delicious and includes a range of paninis and crudos.

Now, Monopoli. My original visions of Monopoli were unfounded. I’d sort of imagined a gritty seaside town but I found myself surprised with Monopoli’s beauty and charm. Where Polignano has more of a beachy feel, Monopoli feels more like a harbour town, and while there are some spots for sunbathing, I wouldn’t really visit Monopoli with that intention. The historic center is the heart of charm in this area, with a main piazza that is home to a series of bars and restaurants where you can while away the afternoon with a spritz. The harbourfront provides a pretty scene with blue boats bobbing along the water — and some industrial activity with commercial fishing happening here, too. Others have described Monopoli as having a ‘lived in’ feel, which I think is a great way to think of it. It feels like a real inhabited Italian town, and while it has charming alleyways with cafés and eateries, it doesn’t feel like a place designed exclusively for tourism (ahem, I’m looking at you, Portofino). Wander the town to see some beautiful churches and streets that are slightly reminiscent of Greece. 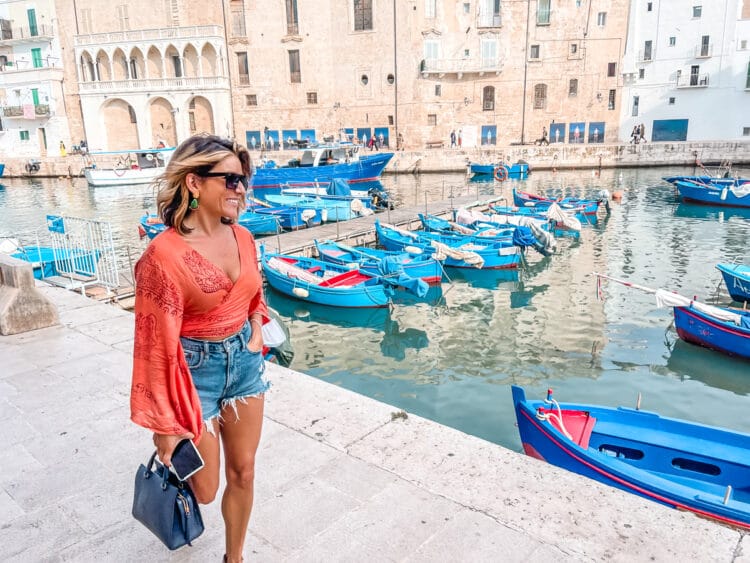 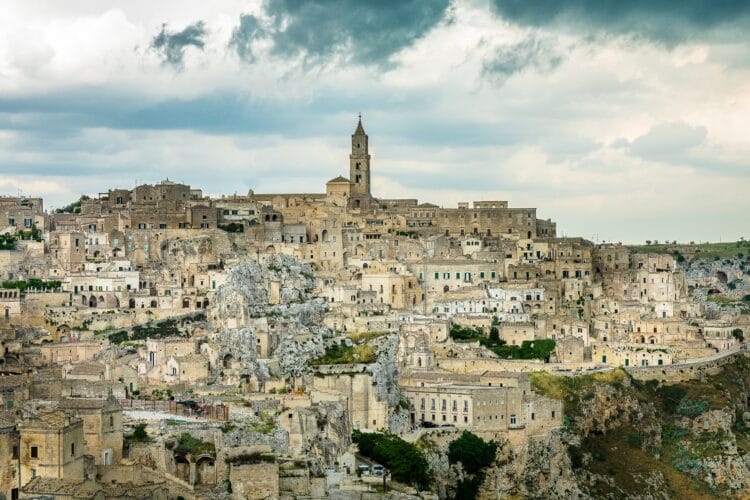 In October 2021, we can now describe Matera as the city of James Bond fame, but for Italophiles, Matera has long been a little gem far before James Bond brought it to the cinematic forefront. I know this post is about one week in Puglia and that Matera is actually in the neighboring region of Basilicata, but never mind those details as it’s hard to not include this as a possible day trip if you’re based in Puglia. In actuality, you’re probably better served to consider a couple of nights in Matera to enjoy their famous cave hotels (like Sextantio, for example) which have Cappadoccia-esque vibes, but it’s doable as a day trip as well (from Polignano on the coast, expect 75 – 90 minutes driving). The region is famous for the Sassi area, home to hundreds of caves that were turned into residences, hotels, and palaces. The town has a fascinating history, transitioning from an incredibly impoverished part of Italy to being labeled the EU Capital of Culture in recent years.

An article in the LA Times, talked about Matera’s historic nature this way: “We think of Rome, at 3,000 years old, as ancient, but it looks newly incorporated compared with Matera, which is 5,000 years older.”

Read The Culture Trip’s guide on things to do in Matera for inspiration! 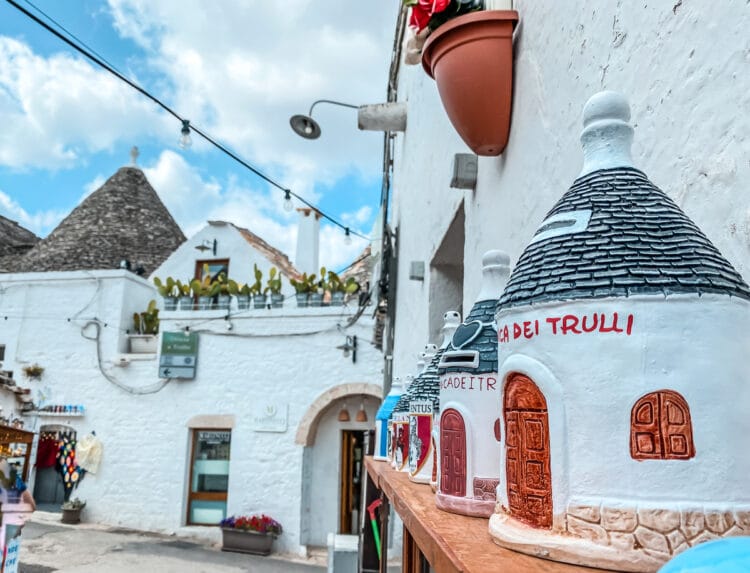 What I’ve listed above is just five days, and adding on two additional days could include time in Bari, Otranto, Gallipoli, Ceglie Messapica, Brindisi, and others depending on your preferences. That said, let’s not forget the beauty of R&R along with some activities that may allow you to delve into towns in a more interesting way. After spending six days out exploring by car, we chose to dedicate one day to hanging in, spending time at the pool, reading, and enjoying a leisurely day with no objectives. A few other activities to consider adding on during a week in Puglia:

Have you been to Puglia before? Is it on your wishlist?