Living in Anguilla: Takeaways from our first season

7 lessons from our move to the Caribbean

It’s September, which means our off-season is officially here and Anguilla is essentially shutting down until November. Hotels are closing, restaurants have shut their doors and the island has made a discernible shift from a tourist/local mix to solely residents. Being here, I tend not to think of life on a traditional calendar basis, but rather on a seasonal calendar (November – September). With this being the end of our year, it seemed like a perfect time to look back at our first season along with some of my key takeaways from our transition to island life:

Patience is a virtue

1When we first arrived on the island, I was quickly exposed to a new way of handling affairs. When I need to deposit a check, there’s no ATM that I can swing by; I have to go inside the bank, wait in line, and hand the check to the teller to be deposited. When driving on a two-lane road, I’m often stuck behind the local who drives 5MPH to get to his/her destination. When I can’t pass, I, too, have to drive 5MPH (and stop when he/she decides to stop in the middle of the road to talk to friends passing by). I could go on and on with examples, but my point is this: my first month was filled with frustration; lots of ‘Why can’t this be easier?! We have ways of doing this that save time! Why can’t I pay my bill online?’ Then there was a moment that I realized something important: I could be frustrated or I could be patient. I prefer to opt for the latter. My grandma always said patience is a virtue and I suppose Anguilla is here to teach me that lesson.

2All that ‘be patient’ business I mentioned above? That’s just a piece of the puzzle and a critical element to living here without wanting to poke your eyes out at the bank. While I do choose to be patient most of the time (okay, it’s a work in progress), I don’t want to lose the drive and the desire to be efficient. It’s easy to go from being patient, to becoming disillusioned when you’re living in an environment where people generally don’t seem to be in any particular hurry to get things done. Seeing slow progress or observing overly cumbersome processes can be disenchanting. No matter how often we’re stuck dealing with seemingly inane processes and folks operating on island time, we have to continue to push. We might not be able to change the system, but it doesn’t mean that we can’t try to encourage a little progress, right?

{As an aside, let me conclude this note by saying that there are people we’ve met here with incredible drive and ambition. I’ve sounded incredibly general in my comment above, but that’s not to say that we’re the only people here with a ‘get it done’ mentality. However, ‘island time’ mentality is pervasive.}

There are no secrets

3We live on an island with less than 15,000 people (that’s smaller than many university campuses). When I meet a local, there’s a high likelihood that s/he’s related to (by blood or marriage), works with, did business with, or lives near someone else I know. As you can imagine, when everyone knows everyone, there are no secrets. It’s like a massive game of telephone. Everyone knows everyone’s business: who you dated, where you work, where you’ve previously worked, if you’ve gotten into fights, what your family situation is, whether or not you have children, which bars you frequent…

It’s a jungle out here 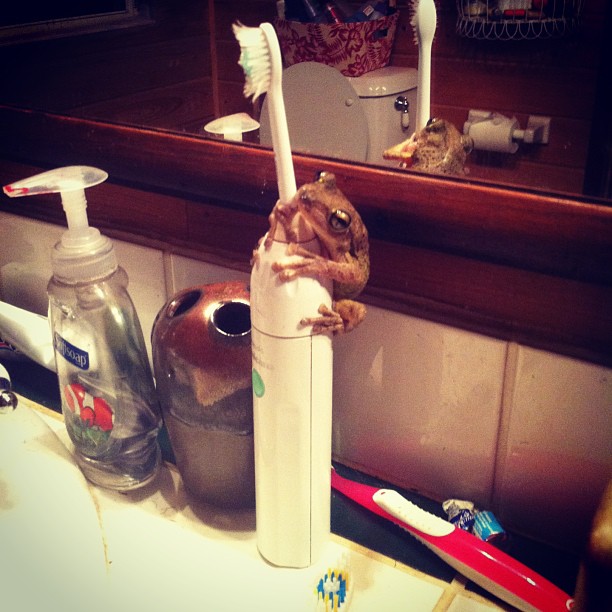 4You’ve read about my run-ins with critters and it will forever be an ongoing thing. We live in a particularly lush area which means all of the animal life on the island congregates near our house. We found a frog on our toothbrush (and one just hanging in a potted plant). I frequently find lizards in the sink or in the shower. There was a tarantula in our room that I spotted before bed, plus I saw the largest centipede that the world has ever created. As Scott will certainly attest, I have those freak out moments (I mean, I saw a TARANTULA in our room, for God’s sake!), but I’m getting better.

The lizards are actually kind of cute.

Rain is a good thing 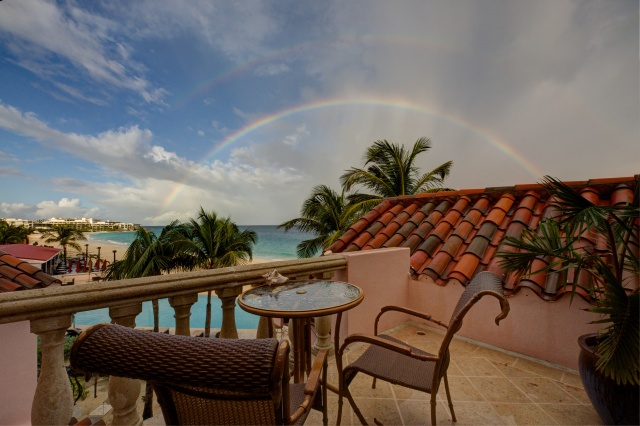 5If you would have asked me my thoughts on rain a year ago, I would have gladly explained my great distaste for it. I’m not a fan of rain or of the cold, and I tend to find the holiday season to be winter’s one saving grace. If it weren’t for the crisp Christmas mornings that I’ve grown accustomed to, I would gladly trade winter in for a second dose of fall.

But here’s the thing: I never appreciated the importance of rain quite like I do living in Anguilla. I mentioned this in a post from a few months back, but one of the things I’ve become acutely aware of is the reality of living in an environment with limited resources. When we run out of water in our cistern, we have no water. Plain and simple. No water to drink, to shower with, to clean with, to cook with. There’s government water which is accessible to most (at a cost), but it, too, is rationed. We may have to pay for the resource in the US, but we rarely come face to face with the reality of being out of water. Living here, I’ve learned to love the sound of rain. That rainfall means our cistern is filling up, our plants are being watered and we’ll have water for the next week.

There is life without air conditioning

6I never realized how fortunate we were growing up. I know I’m like many others out there in saying that I grew up often comparing what I had to others. Other kids had newer clothes, a better car, got better family vacations, blah, blah, blah. Well, now that I’m an adult — and I’m writing this — I realize how spoiled many of us are without quite realizing it.

I mentioned before that I don’t like the cold. On the flip side, I don’t like that sweaty heat, either. When the summer sun shines in California and the temps crawl up to 90+, my A/C goes on full blast in the car and in the house. I like to be comfortable! Now that I’m actually verbalizing it, I realize how lucky that makes most of us — to be heated in the winter and cooled in the summer.

The home we live in here doesn’t have an A/C. I thought I might die when we first moved in; the stagnant warmth would sit inside until we’d open up the doors to free it. For people who have A/C, it’s still something that has to be used sparingly here. Electricity costs are extremely high here (like extremely) so it’s often kept solely in bedrooms. Fast forward a few months. It’s now September, one of the most hot and humid times of the year, and you know what? We’re alive. And not uncomfortable most of the time. We put our fans on high, we open our doors for a dose of fresh air and we drink lots of water. Yes, sometimes it’s sweaty — it happens! — but generally, we’re fine. We appreciate a good breeze and cooler nights.

{And we thank our lucky stars that our car has air conditioning.}

Your mentality on materials shifts 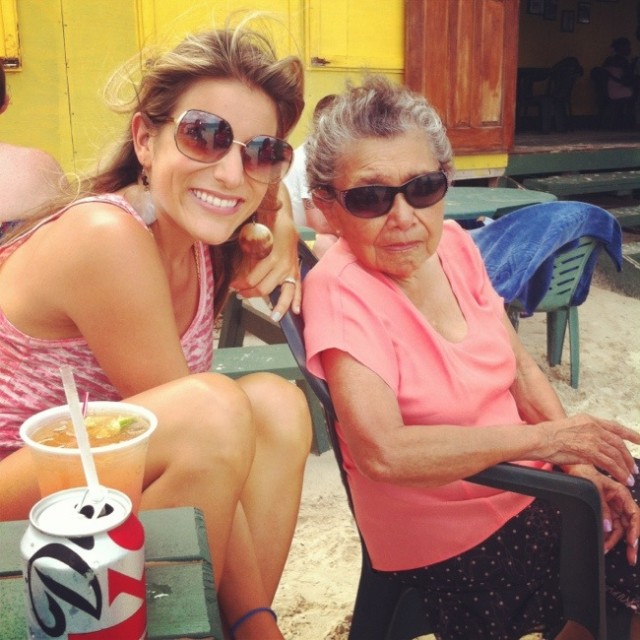 7Last, but certainly not least, one of the greatest things that’s happened during our time here is this bold realization about material things. I’m sure many people can relate to this: we proudly talk about wanting to stay away from that ‘keeping up with the Joneses’ mentality, from valuing material things just a bit too much. At the same time, you can’t help but want the nicest things, and wanting to participate when all of your friends go out to fancy dinners and expensive brunches. It’s not just about buying a pair of shoes, it’s about buying the best pair of stilettos that the world has seen. It’s about buying the $20 lipstick, lest we bust out Walgreens’ finest. When you go to buy a car, you don’t just look for functionality (I mean, telling people you bought a 1992 Toyota Corolla doesn’t quite have that exciting underlying tone), you look for something that people can ‘wow’ at a bit. To be sure, part of this is a quality thing — I appreciate good quality and I don’t mind paying a bit more for it, but there’s also a bit of the brand appeal, right?

That’s not the case down here. At all. Successful people are happy to drive around in the ever-present Toyota Yaris. Or a 1992 Corolla. If it gets you from Point A to Point B, you’re happy and no one judges. People still make an effort to look nice when they go out, but it’s not about busting out the newest Balenciaga bag or flashing the sole of your Louboutin, it’s just simply about looking nice. Houses are functional. Sure, there are the crazy villas here, but those are not an accurate representation of a local home. There’s an aesthetic dimension that goes into houses to a certain extent, but the most important thing: are they built to withstand a hurricane and do they protect from the elements? People aren’t embarrassed to show you their home just because it’s not as big, not as nice, not as new.

I’m sure kids play with their Wiis and iPads here, too, but to see kids playing on the beach and in the ocean with each other — with neighbors and friends from the community — is a pretty cool thing. It’s not about having more than someone, than competing with someone on a material basis; it’s about being a part of a community.

People have asked repeatedly, ‘how are you adjusting? How is it having moved here from a US city?’ The truth is that it’s been pretty great. There have been moments of frustration, but it’s generally been a fun and valuable experience. We’ve stayed busy — something that I think is key in this equation — but we’ve taken the time to enjoy our surroundings and appreciate the lifestyle. It’s certainly different from anything I’ve grown accustomed to, but perhaps for that reason in particular, it’s been a valuable experience.