Tranquility on the Lake

Our second day at Lago de Yojoa brought us an adventure on the lake itself. We had a number of excursions we wanted to experience, but boating and/or birding on the lake seemed like a must for us so we could actually see the lake before departing Peña Blanca, the small town nearby.

Our alarms went off at 5:40AM, giving us a quick twenty minutes to prep ourselves before our 6AM departure. The days get hot quickly so an early morning start helped guarantee a tranquil and enjoyable trip vs. a sweaty one. 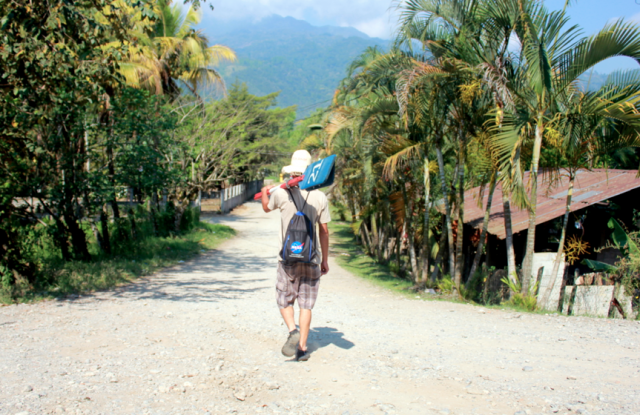 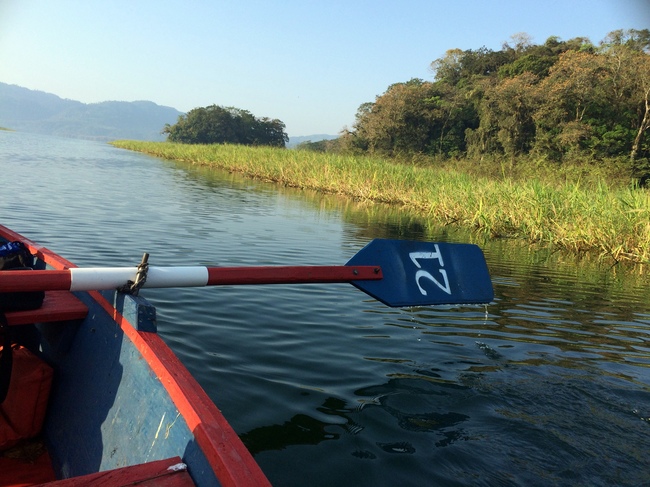 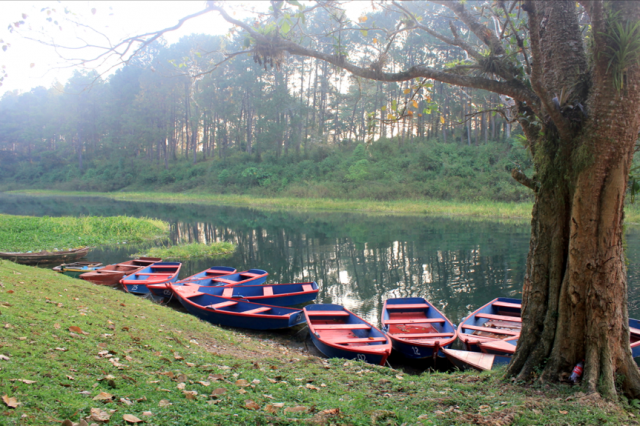 We headed out from D&D Brewery with our guide Ronaldo, who took us to his home for a hot cup of coffee before we headed to the lake. Ronaldo had a few English words but our conversations were almost entirely in Spanish throughout the course of the day. As with the majority of our other experiences in Honduras, it was a great opportunity to put our Spanish to use. After trips like this, I’m always amazed by the power of immersion when it comes to honing language skills. In day-to-day life, we’re often too embarrassed to practice our Spanish – we don’t sound like natives, our conjugation’s not perfect, we’re using the wrong past tense form, etc.- but when language skills become a survival instinct (i.e. to tell the driver where you need to go, explain what time your flights are, talk about dietary restrictions, etc. etc.), you quickly realize that it’s okay to be floundering a bit because you have a point to convey, and let’s be honest: no one’s really judging you if you’ve conjugated the verb improperly.

Based on our conversation with Ronaldo, we learned that while the lake doesn’t have a strict ban on motor boats, there are only a few that make an appearance. For the most part, it’s quiet rowboats that take to the waters to explore in a tranquil environment. And with a 6AM departure time, it certainly qualified as tranquil. When we hopped into our boat we saw but one other trio heading out on the lake. Throughout the course of the entire morning, which lasted about 3 1/2 hours, we saw two other boats on the water: one fisherman who lived in the local community, and one duo out exploring. 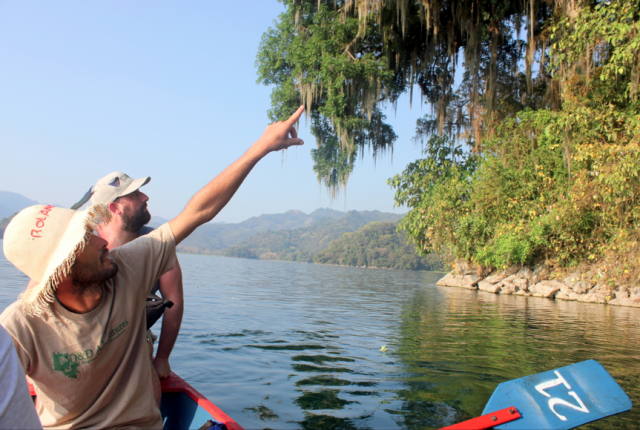 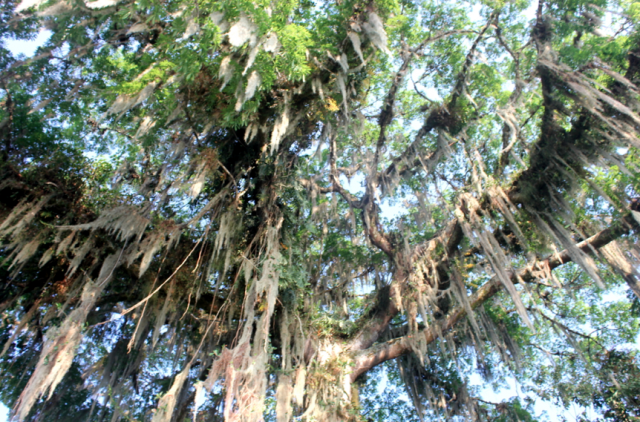 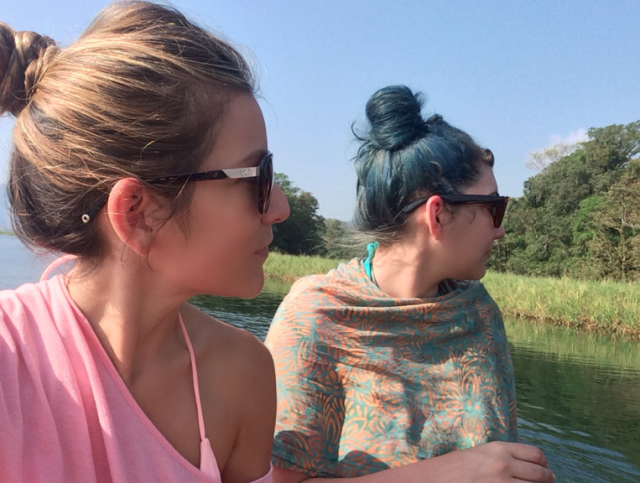 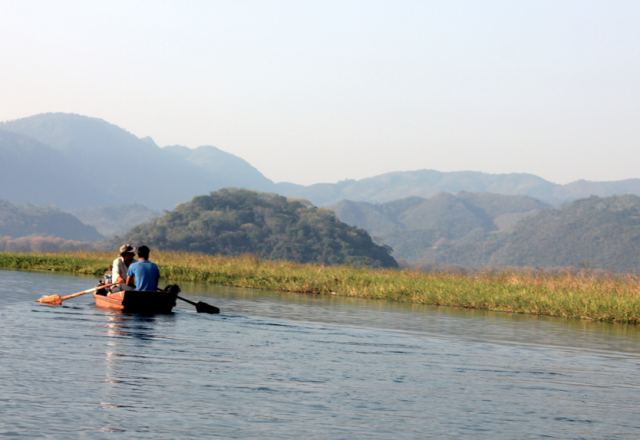 The trees on the lake are stunning. Rowing under big ceiba trees draped with Spanish moss was fairytale-like, and we spotted a number of toucans flying overhead. The toucans were probably the most exciting for us when it came to bird watching. None of us are real bird enthusiasts so the herons, egrets, et al. were interesting enough, but honestly didn’t get me overly hyped. For someone seeking something a bit more thrilling on the lake, there’s an opportunity to ‘cliff dive’ (an exaggeration for sure) off of a series of rugged rocks. The way we’d heard it described, we imagined something pretty dramatic: a 35 or 40′ jump that would get the boys’ adrenaline pumping. When we pulled up to the jump site on the boat, it seemed fairly anticlimactic, maybe 15 – 20′ high. Plus, without amphibious shoes it made it would make it difficult to navigate the climb without tearing up their feet (or legs or bodies or face), so they decided against taking the plunge. Luckily we’d had our fill of jumping into pools of water from the day before (see here). 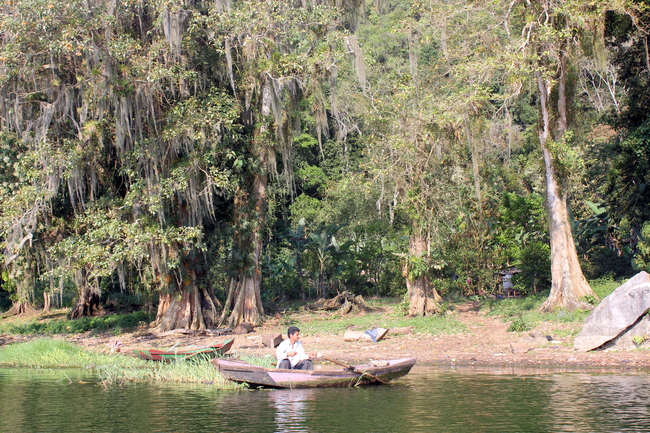 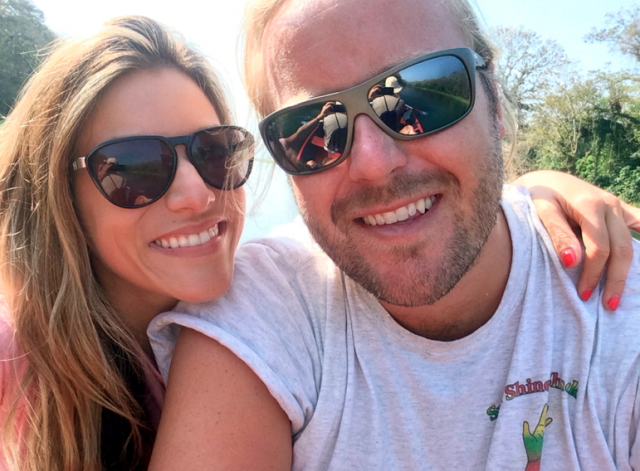 If you want adventure, this probably isn’t the excursion for you. If you want a nice brush with the lake however, then this is a pretty great way to experience it (375 lps per person, about $18 each). We knew we couldn’t leave the Lago de Yojoa area without having actually gone to Lago de Yojoa. It seemed sacrilegious. Plus, there really is something wonderful about being up early in the morning before the rest of the world has risen. The air is crisper and you have that rare opportunity to hear the world wake up around you. As Ronaldo said to us as we made our way back to land, ‘there’s not much money here, but it’s a beautiful life’. I can’t say I disagree.

Have you been to Lago de Yojoa? What did you think?