Every year we start afresh with daydreaming about our perfect getaway for fall. With three to four weeks to go on a grand adventure, the world is our oyster in the truest sense of that statement. We’re fortunate to have the time and flexibility to go on a far-flung adventure like our month in Africa last year or our multi-leg trip to Ireland and Basque Country in 2015.  It’s a test though: where do we really want to go? With the entire world in front of us, do we revisit a place that we’ve already fallen in love with or continue to explore new places to find new gems around the globe? Thus far, we’ve opted for the latter and this year is no different.

We had an anchor point for our trip this year that’s helped shape the remainder of our time away. Scott’s parents are celebrating a milestone anniversary and have invited us to be a part of their celebration. They’ve visited a dizzying amount of places but fell in love with Croatia somewhat recently, and chose a return trip to the country for their celebration. Trying to round out our trip from there, we pulled out a map and started throwing out ideas to until a few stuck. After a couple of months of toying, we’ve finally solidified our plans with purchased plane tickets and confirmed hotel reservations. Check out our itinerary for Central Europe below! 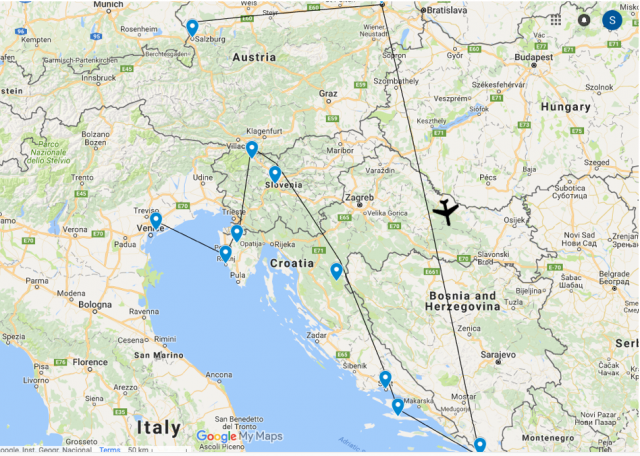 If you would have asked us a month ago, we would have told you definitively that the first leg of our trip would be spent in Montenegro. With Croatia playing most prominently into September’s plans, our biggest decision was whether we wanted to venture north into Slovenia and Italy or go the opposite and venture further into the Balkans. Even after scrapping the Balkans idea for lack of time, Montenegro was still on our list to kickstart our month.

It was during the process of looking for tickets that a new idea was born. Flights to Dubrovnik and to Podgorica were both terrible (think 23 hour layovers in Miami, plus another overnight along the way), and we found ourselves losing way too much time in the transit process. When we started toying with AirFrance to use some of our points with the Flying Blue program (via our Chase Sapphire, my favorite travel credit card), we found that places like Vienna, Munich, and Zurich were incredibly easy to reach with one short layover in Paris, allowing us to make the most of our time before linking up with the crew in Croatia.

After revisiting our plans, we started to like the idea of Austria on the front end. It is totally different from Montenegro but we were okay with that due to the fact that Croatia will be bringing similar architecture and landscapes to what we would be seeing in Montenegro. Austria provides us with a contrast to Croatia from cultural, architectural and historical perspectives, and allows us a unique leg within this broader journey. Plus, we scored business class tickets for 75,000 points each (vs. 51,000 points in economy). The points geek within me has been jumping for joy for the last two days.

We begin our time in Austria in Salzburg, where we’ll spend two nights exploring the city of Mozart and Sound of Music fame. From there we head to Vienna where we’ll have two nights in the Austrian capital to take in the history and arts before hopping on a quick flight to Dubrovnik.

Croatia is the star of this trip.

Of the 30 days we’re taking to explore, we’re spending 18 of them in Croatia. Following our quick four-day stint in Austria, we’ll head down to Dubrovnik where we’re linking up with my in-laws for their anniversary celebration. We’ll kick off our trip with four days in Croatia’s most popular city for my first brush with the Adriatic.

From there, we’ll be basing ourselves in Hvar for a week. Neither Scott or I have ever been to Croatia before but his parents, who have been a few times, had a memorable trip to the Dalmatian Islands and wanted to revisit the region with a new home base. They’ve taken the reigns on Croatia itinerary planning but captured highlights of southern Croatia working from south to north. After Hvar, we’ll end our time together in Split for a couple of nights before parting ways with the family.

Our time in Croatia doesn’t end there, but we mix it up with incorporating Slovenia into the mix. We’ll be picking up a rental car in Split and making our way to Plitvice National Park to scope out the world-famous waterfalls during our journey. I’ve read about the park being overrun with tourists but the location made sense for us in looking at our game plan, and it allowed us to integrate a different element of Croatia beyond the coastal scene. From there we continue to Slovenia for four nights. You can read more on Slovenia below.

After we return from our four nights in Slovenia, we enter back into Croatia for five nights in Istria. We debated on how to spend our time on this tiny, diverse peninsula. Nothing is too far, yet ‘far’ is such a relative term. The more we delved into it, the more we realized that for our purposes the peninsula could essentially be divided into two parts: the coastal part with some of the glittering seaside towns like Rovinj and Porec; and the inland hilltop towns like Grozjnan and Motovun with stunning elevated views of the gorgeous landscape below and a penchant for cooking up truffle-laden cuisine.

In some ways it made sense to have one home base so we could allow ourselves to unpack and fall in step with the rhythm of the region. On the flip side, we found ourselves struggling with the prospect of driving 30 – 40 minutes to go to a different area for dinner. Quite honestly, we’d never do it. Instead, we’ve opted to split our time with two nights in Motovun, and three nights in Rovinj to allow us to explore each region, its sub-culture and its cuisine.

Between glimpsing Plitvice National Park’s iconic waterfalls and eating our way through Croatia’s Istrian Peninsula, we’ll be spending four nights in Slovenia. We’ve long talked about visiting Slovenia, a country that probably wins the battle for the most-difficult-to-spell capital and for the prettiest church on an island in a lake. It’s a gorgeous gem of a country but we knew we wanted to wrap it into a larger trip.

We’ll start by spending a couple of days in Ljubljana (I’ve spelled it enough times to remember both ‘j’s now) to take in the capital city and its sights. From there, we’ll head to Lake Bled in the Julian Alps for a couple of nights to give us time to venture to the island and explore the area on foot.

We’ll be in Istria immediately before our time in Italy, and decided to end our time in Venice. From Rovinj, Venice is a relatively quick (three-hour) ferry ride away, making it the most sensible place for departure for us. Flying back to the Caribbean from Venice is a breeze on AirFrance, and it’s a part of Italy that I have yet to visit. With a few days at the end of our trip, a romantic three-night stint seemed like the perfect way to cap off our time in Europe. I’ve always raved about Italy being one of my favorite countries – if not my absolute favorite – in the world. There’s so much beauty and regional diversity, and there’s an X factor about it that I find hard to put into words. I’ve mentioned a return trip to Italy at least four times a year since we’ve gotten married so it’s possible that this is a way to keep me quiet for a few more years. You know what? It may just do the trick.