Sermon on the Mount + Sailing the Sea of Galilee

For most Christians, even the moderately religious among us know the Beatitudes. There are eight Beatitudes listed in Matthew, and as many of us will remember, the Beatitudes were revealed during the famous Sermon on the Mount. To start our second day in Northern Israel, we headed to the Mount of Beatitudes on the northwestern short of the Sea of Galilee. I’ll be honest: despite my overall meh attitude towards tour groups, our time at the Mount of Beatitudes was probably the highlight of being part of a group like this. Unlike nearly every other place we visited where throngs of tour groups descended onto a space, this felt special. It felt like it was our group and the world, with our pastor giving a sermon of his own while we looked on. Other groups were in sight, but they were doing their own things (much like we were) tucked into disparate areas of this religious site. We went through the Beatitudes, with different members of our group reading each verse. My instinct is that this is exactly how the Mount of Beatitudes should be experienced. We didn’t see many solo travelers; most belonged to at least small groups where they were recreating their own sermons. 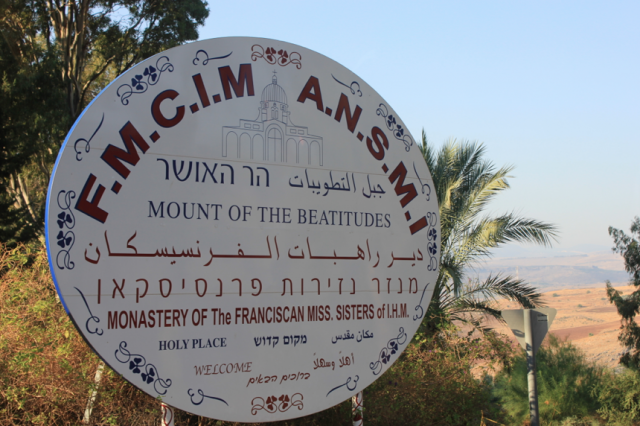 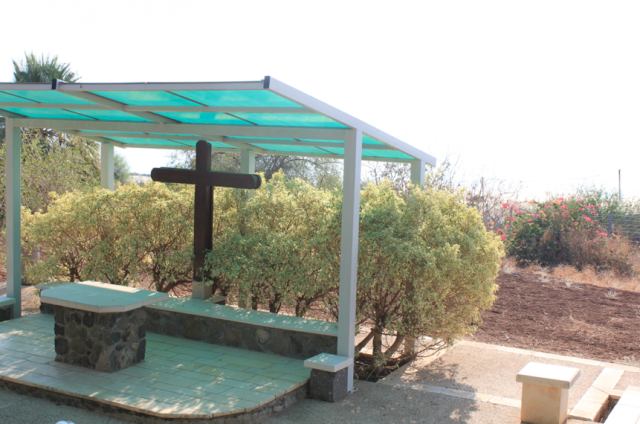 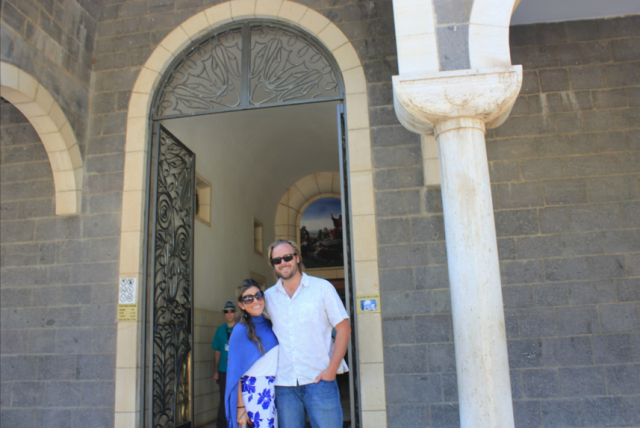 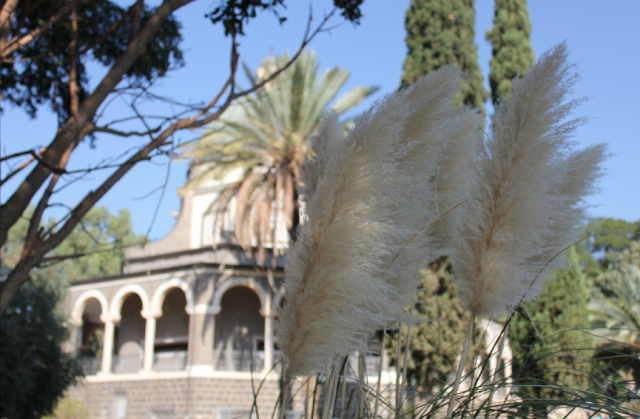 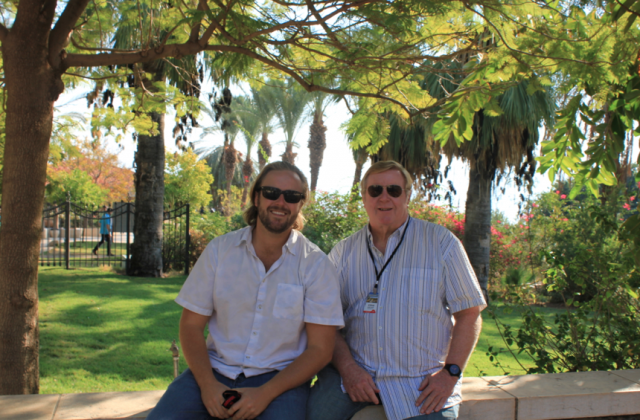 Capernaum + the Church of the Multiplication

From the Mount of Beatitudes, we headed to nearby Capernaum before stopping by the Church of the Multiplication of Loaves and Fishes. Capernaum is an incredibly historic town biblically in that it is the city where Peter grew up. A church now sits over what is said to have been Peter’s home, and ruins were found that bore the inscription Yeshua, leading most people to believe that Jesus spent a significant amount of time here. When you enter the city, there’s a big sign welcoming you to ‘the town of Jesus’, but Capernaum, ironically, is a town that is said to have been cursed by Jesus since they were non-believers despite the many miracles performed. As an aside: Am I the only one that missed the verse in the Bible that talks about Jesus cursing anything? The ruins are well-preserved and while they’re not nearly as expansive as what we saw in Jerash (or later, what we would see in Beit She’an), they were significant and very cool to walk through. 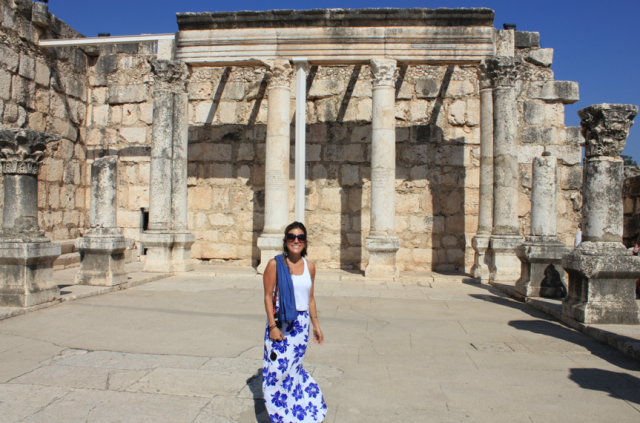 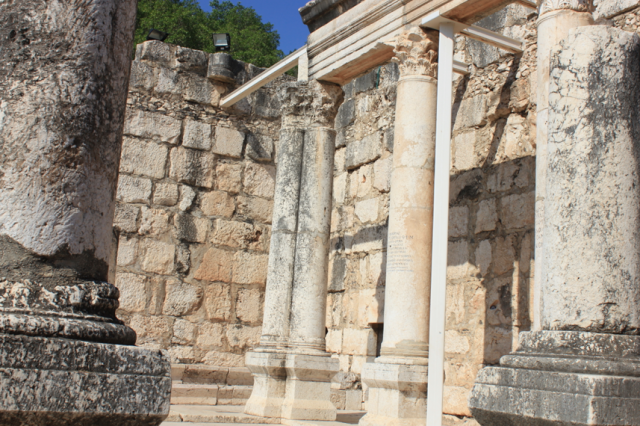 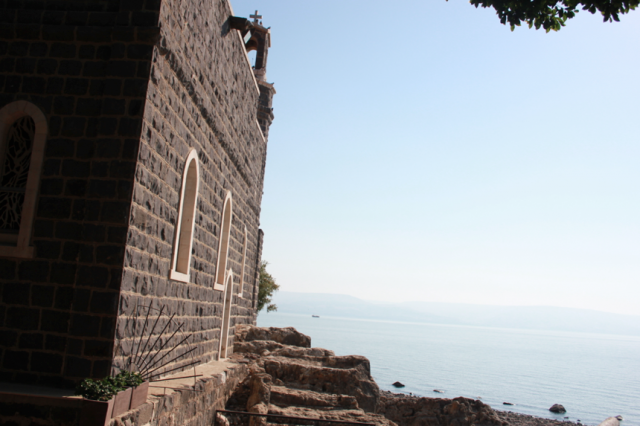 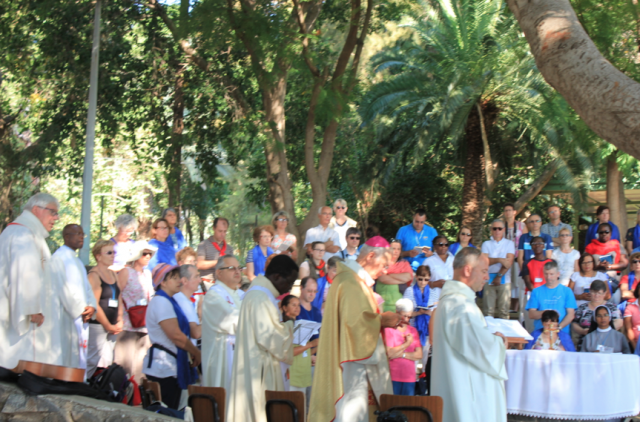 The views from Capernaum are stunning, too. Capernaum sits right on the Sea of Galilee so the backdrop is the flat blue sea, and rocky beach. Above you’ll also see the flag that with five crosses on it: one large cross and four smaller crosses in each corner. That symbol, we discovered, is the symbol of the Holy Land. We saw it for the first time in Bethlehem at the Church of the Nativity and saw it many times after at holy sites in Northern Israel and in Jerusalem. You’ll see it as an inscription on doors, a symbol on flags and in the form of olive wood souvenirs. 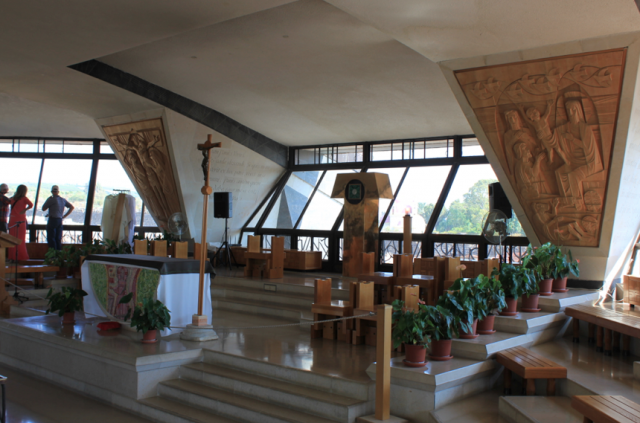 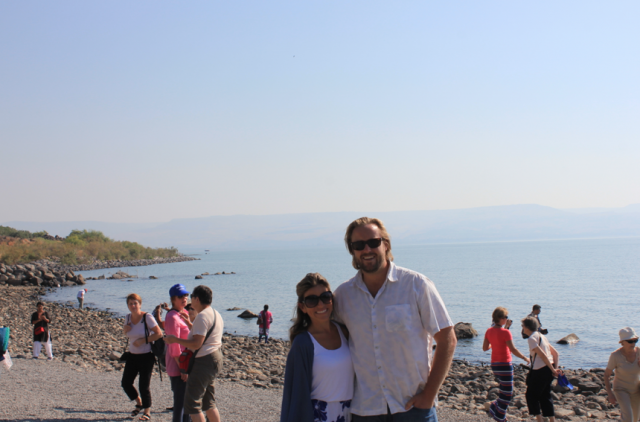 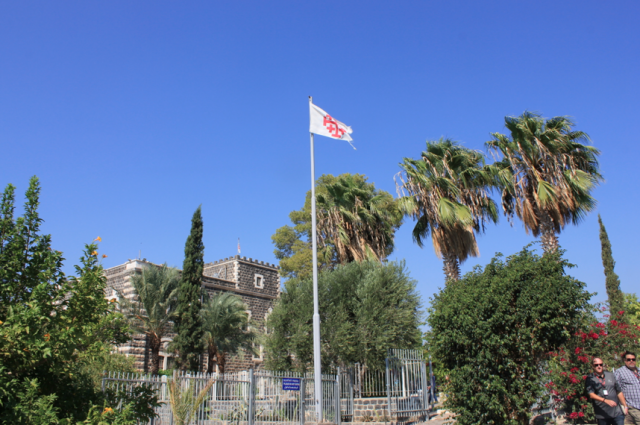 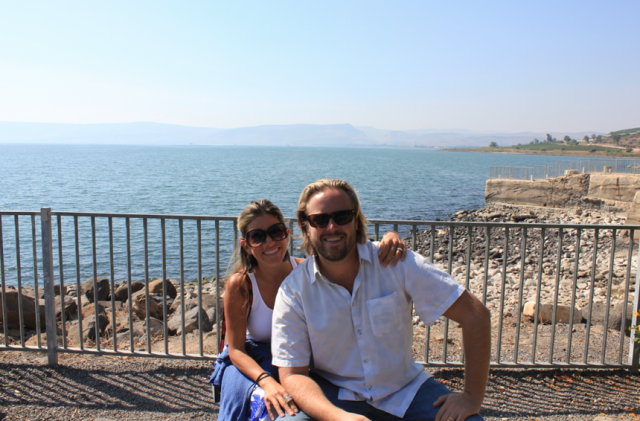 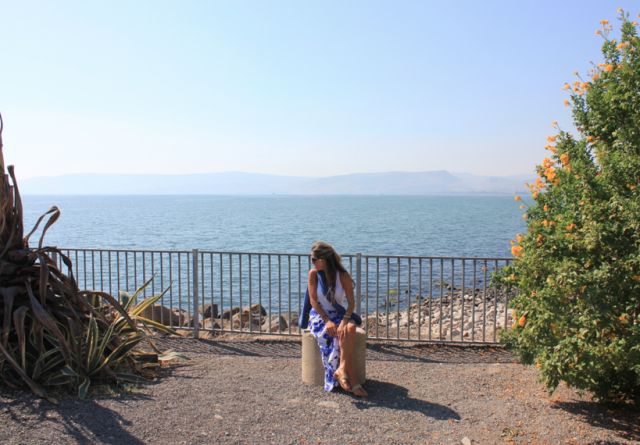 From Capernaum, we made our way to the Church of the Multiplication, where we were beachfront on the pebbly shore. We were there briefly, but it’s a pretty magical place in that you’ll witness a lot of church services taking place around you. While we were listening to the history and significance of the space, we saw a Catholic service taking place very nearby, with the congregation singing and incense burning. 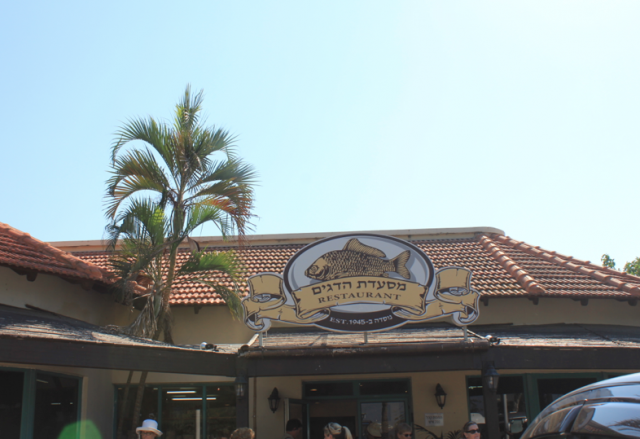 Unlike other days of our bus tour where we were jetting around in a bus for relatively long stretches, our second day in Northern Israel was focused around the Sea of Galilee so we spent more time taking in sights versus sitting in a bus (praise the Lord). For lunch, we headed to a nearby kibbutz, Ein Gev, located on the edge of the sea. A kibbutz is essentially an agricultural commune, and there’s no particular religious affiliation that spans all kibbutzim. Some of them are totally secular, some are devoutly Jewish, some fall somewhere in between.

Ein Gev is actually a very highly rated lunch spot in the area, and most guide books and online travel guides point visitors to this spot for a really cool, authentic experience. I wasn’t sure what to expect, but it was awesome. Lunch options were a choice of fish or pizza + pasta, and despite the fact that I live in the Caribbean where we’re overloaded with fish, I couldn’t go to a restaurant that dubs themselves a ‘fish restaurant’ on the Sea of Galilee and order pizza. Sacrilegious. 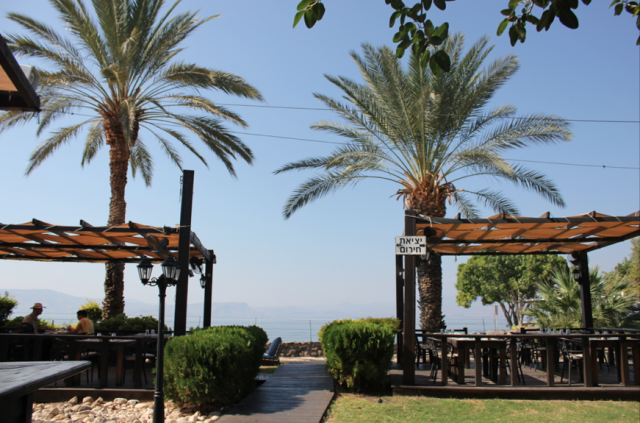 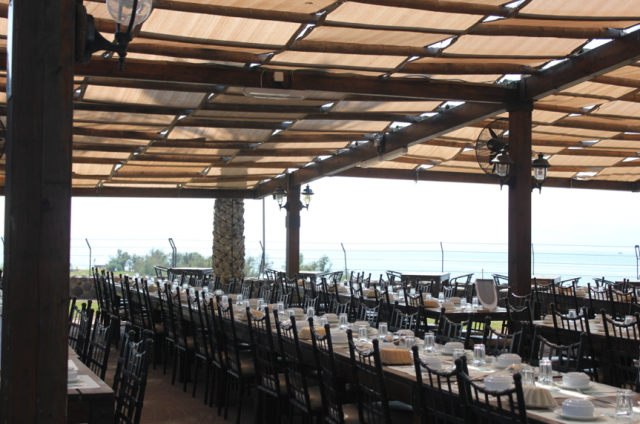 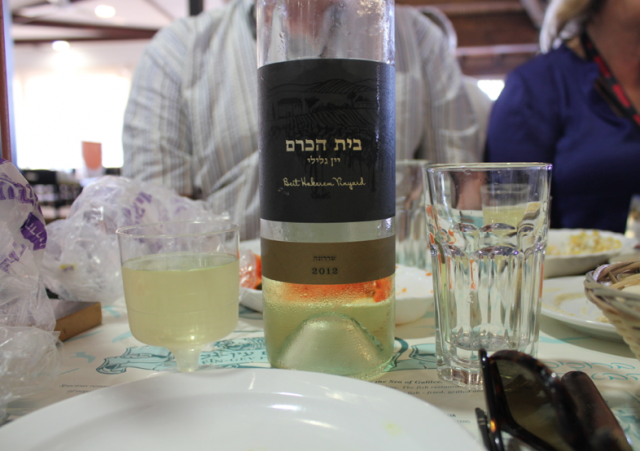 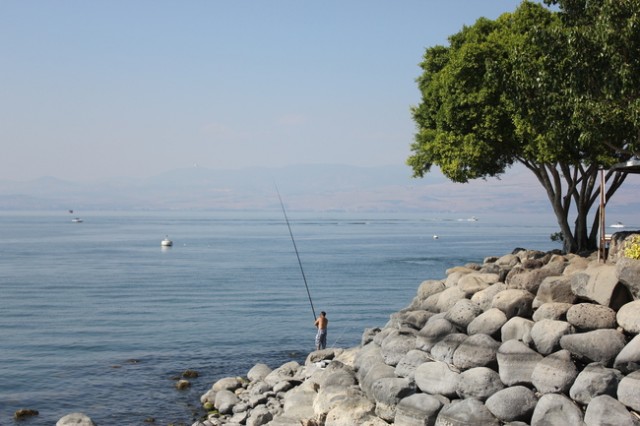 The food was good and they offered up local wine which was a nice addition to the menu. As you can see, the tables were long and communal which was great. Plus, the view and the breeze were perfection.

Sailing the Sea of Galilee 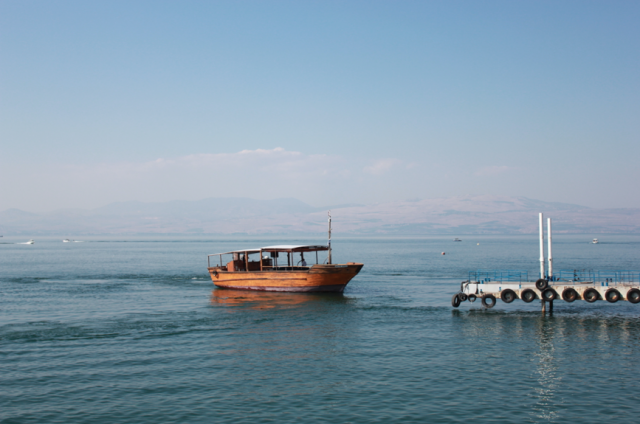 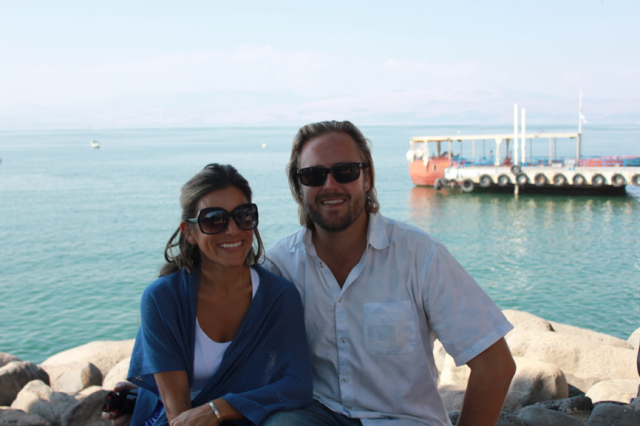 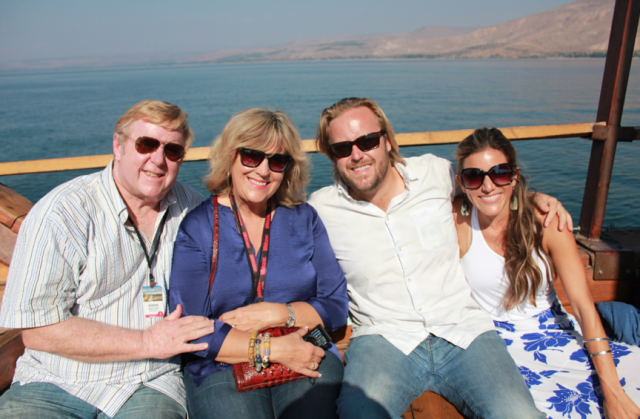 After getting our fill of fish and wine (very Biblical, no?), we strolled the grounds before heading to the launch point for boats sailing on the sea. Along with the rest of our group, we boarded a wooden boat that business-minded companies have aptly called ‘authentic Jesus boats’ (I couldn’t help but giggle), that took us across the Sea of Galilee for about an hour. The sun was hot and the sea was calm; perfect conditions by all accounts. Our pastor took the time to share his thoughts, and three talented ladies led the group in worship which was a pretty unique experience. I met other travelers who had sailed on the sea independently, and I imagine that a non-group experience is very different (no worship, no sermons, etc.) and equally magical. We made our way back to the Gai Beach Hotel for the night where we watched the sun set on another evening in Israel. Stay tuned as we spend one last day in Northern Israel before heading to the Dead Sea!

Have you visited a kibbutz? Sailed the Sea of Galilee? I’d love to hear thoughts from people that didn’t go with groups – how did your experience compare?