In Favor of the Gap Year

When I moved to Europe, the concept of a gap year was still foreign to me. I’d heard the term, primarily in reference to that post-secondary school/pre-university year when young adults were encouraged to see the world, and ideally broaden their horizons and gain new perspectives.

As an American, this wasn’t part of the discussion. Growing up in a middle-class family with two parents who hadn’t gone to college, the goal for us – along with most everyone – was the same: go through school, do well in school, graduate from college, and then — well, then you’d have taken all of the crucial steps to embarking on a successful life. No doubt, you’d secure a great job, at the very least making enough to live a good enough life making good enough money to get by. Not only was the concept of taking a gap year not discussed, the idea of it would simply be ludicrous by most standards. For most parents, the idea of spending a year of gallivanting around the globe was a waste of time; precious time that could be better be used in a classroom studying Organic Chemistry, The History of Religion, and other such classes that would inevitably impact our lives on a grander scale.

Now, I’m a huge proponent of education –  I think it’s arguably the most powerful tool for inciting change and empowering disenfranchised populations, amongst other things –  but I’m also a huge believer in the transformative power of travel, and firmly live with the guiding philosophy that travel is a form of education. I think this is true for young children, too, so that they are able to grow up exposed to new cultures, languages, and others ways of life. Travel is arguably one of the most important factors in fighting xenophobia. The more we travel and the more we interact with people from across the globe, the more we begin to realize how much we are actually alike despite what seem like differences.

As a young adult, especially for those that aren’t sure at 18 exactly what they want to do with their lives, is time really better spent in a classroom taking general education courses, or is it more valuable to take that same time (if they are so inclined) to not only see the world, but to really learn what independence means and what adulthood entails? With parents involved in this process, it can be a way of encouraging a child to begin critically thinking about how they want to make an impact in the world, and which route is the best way to achieve that goal. A gap year doesn’t have to be the domain of the wealthy; in fact, as many of us know, traveling can be done extremely well on a budget and can offer some of the most culturally immerse and perspective-altering experiences. (Side bar: I realize in writing this that the term ‘wealthy’ is a biased one and I’m referring to this in the context of developed countries, specifically within the United States. I know that for many children growing up in developing countries around the world this conversation of ‘college vs. gap year’ isn’t a realistic one.)

Let’s not discount the life skills that are learned during a year away; learning and doing become survival mechanisms. You learn how to get around, how to interact, and how to understand new languages because you have to. It’s the real world, which means you’re forced to learn how to exercise extremely practical skills insofar that parents encourage this to be a necessity. You learn how to budget your money. You learn what’s worth spending on and what’s not. You learn how to interact with people who are very different from you. You learn the best way to get from Point A to Point B in the most efficient way. You connect with others on the road that add an incomparable amount of value to your life – in the moment and potentially in the future (you never know where life will take you or those that you meet). You learn what the world is like beyond your borders and come face to face with some brilliant and some harsh realities about others’ lives. In seeing, experiencing,  and doing first-hand, you learn what truly ignites you on a fundamental level because you have the opportunity to see the world for all that it has to offer and all that there is to be done. Most who have traveled a fair bit internationally and have fallen in love with gaining global experiences understand this, and I would wager that most – like myself – would be in favor of a gap year for their own children if that was the route their child personally chose to take. A well-crafted gap year could even mean learning a new language through immersion, something that I find to be perhaps the most valuable skill.

There are very few times in our adult lives where we have the opportunity to travel for a longer stint. School schedules and then work schedules creep into life and often take away the valuable time that we have to explore the world more deeply. For most Americans, entering the workforce means accepting two weeks of vacation per year, a small allotment that many feel bad using anyway. Knowing how much travel has impacted my perspective and passions over the last decade, I see a gap year as anything but a waste of time. At worst, it’s an experience traveling around the world and learning about other destinations with a homecoming that perhaps makes you – gasp – realize that travel isn’t your thing. On the flip side, it may also be a year that brings a eureka moment where your path and goals in life become more clear, and where you gain skills that quite simply cannot be taught in a classroom.

With Malia Obama opting to defer her Harvard education in favor of a gap year, the thought is more firmly at the forefront of parents’ minds and the concept has become something less foreign. Europeans and Australians have been enjoying gap years for years – many gaining broader perspectives because of it – and my hope is that Americans begin embracing this idea as a realistic option for a post-high school year. As the world changes, it becomes more and more critical that we focus on creating global citizens; humans that realize that we’re not ‘Americans’, or ‘Europeans’ or ‘Italians’ or ‘Oregonians’; rather, we’re citizens of the world, a world that we share. We live in a world where issues like climate change, gender equality, and poverty eradication are global issues requiring global solutions – solutions that require innovative thinkers that understand the world after seeing it with a wider lens. The truth is that it’s difficult for any amount of reading or studying to truly impart that. We can learn of the issues (some of us can learn about them extremely well), but seeing them first hand and understanding realities on the ground make us more effective communicators and perhaps more creative thinkers in the long run. 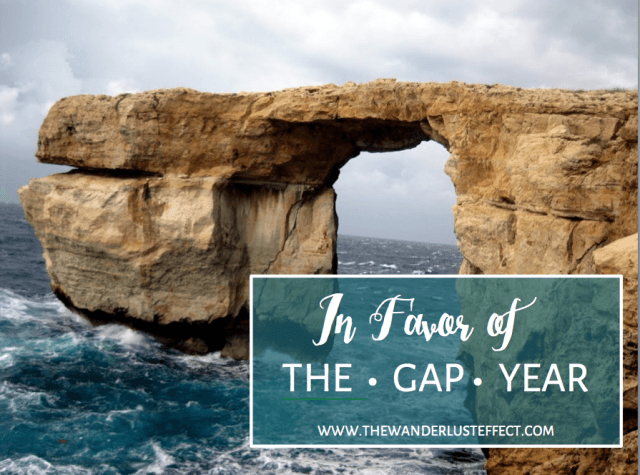 All of that isn’t to say that we shouldn’t work hard, study hard, and strive to gain formal education to achieve our goals. We definitely should do those things as they are incredibly important (I would never tell my children otherwise), but we should do those things while understanding the greater picture and making ourselves well-learned in a holistic way. For an interesting read that challenges the idea of travel being a substitute for education, check out Allison Smith’s post on ‘Why Travel is Not Education’.

So, cheers to the gap year as a tool for cultivating the global citizens that the world needs to move forward. My instinct is that my generation will be excited to embrace this idea if/when our children face this crossroads in life and that we will see this become a realistic alternative as young adults figure out their personal paths in life.

Did you take a gap year? Would you? Do you see it as a valuable year or a waste of time?