Should you visit the Argentinian or Brazilian side?

If you’re heading to Iguassu Falls and you’re anything like us, you’re probably trying to figure out if you should do the Brazilian side, the Argentinian side, or both. We knew going in that we wanted to experience Belmond’s Hotel das Cataratas, which naturally meant that we would explore the Brazilian side of the falls. We also were more inclined to visit Rio de Janeiro than Buenos Aires so that factored into our decision-making during the planning process.

Yet many fellow bloggers and people we’d spoken with had mentioned the value of seeing the Argentinian side as well for a different perspective. As American passport holders, we both had to get Brazilian visas ($160 plus a bit of a process required in advance) and accepted that we’d be forking over that fee when the time came to pony up. What we hadn’t realized was that Argentina also requires a reciprocity fee for American passport holders. Unlike Brazil, it doesn’t have to be done at an embassy months in advance. The Argentine reciprocity fee is a $160 fee that visitors can pay online prior to their visit, and the form that is produced is valid as a 10-year multiple entry document. When you arrive at the border, you simply show your passport along with the printout verifying that you’ve paid. I mention this because it’s certainly a factor for people debating whether or not they want to visit both sides. If this is your first time to both Argentina and Brazil, you’ll be shelling out $320 per person in visa and reciprocity fees before you even pay your park entrance fees and taxes if you want to see both sides.

While you can see the falls beautifully from either side, each national park is strikingly different. 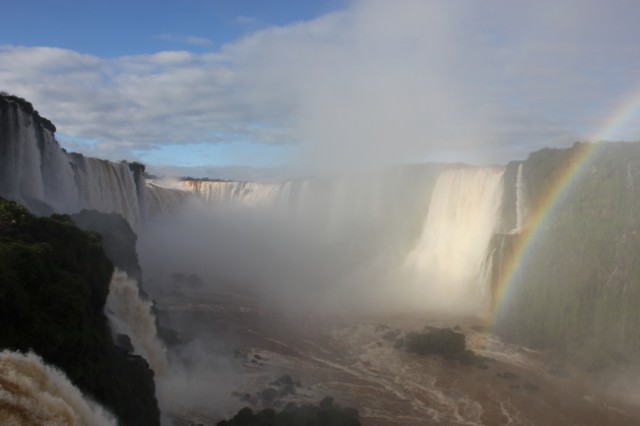 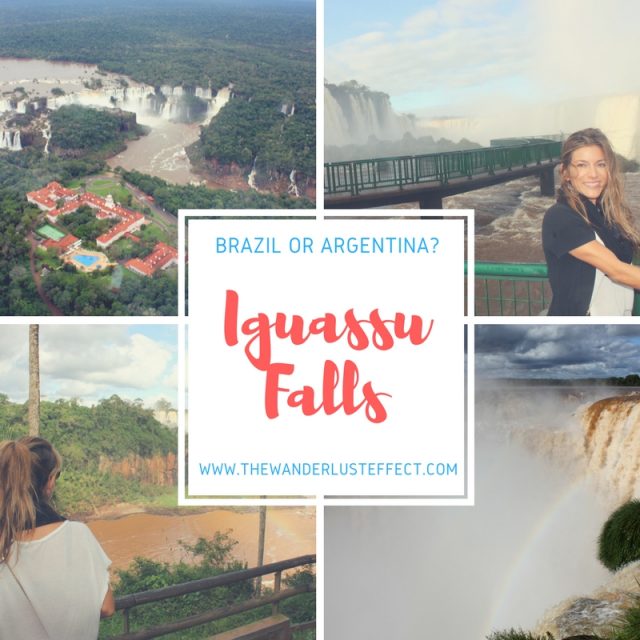 We found the Brazilian side felt much less developed than the Argentinian side. You’ll enter the national park in Brazil transported by the park’s bus system and will have the choice of a few primary stops: a walking trail, the Macuco Safari experience (definitely a cool way to see the falls), and the entrance to the falls’ primary walking trail which sits opposite Hotel das Cataratas. I would argue that the hotel itself is an attraction worth seeing on the Brazilian side as well. The stunning old world interiors are worth a gander if timing permits. {If the bar’s open, try their handcrafted caipirinha with the 6-year-old cachaca – it was my favorite!}

The walking trail for vista points on Brazilian side is a single primary path, consisting of a series of steps that help you descend into the base of the falls. There are viewing platforms throughout but the final viewing station provides stunning panoramic views of the falls (majorly stunning). This is the only real trail that you’ll experience on this side and it’s definitely best to go first thing in the morning so you can enjoy it before the crowds roll in. Since there aren’t as many areas for people to disperse on this side, crowds will be particularly noticeable and limiting.

As a starting point, read about our time on the Brazilian side here. 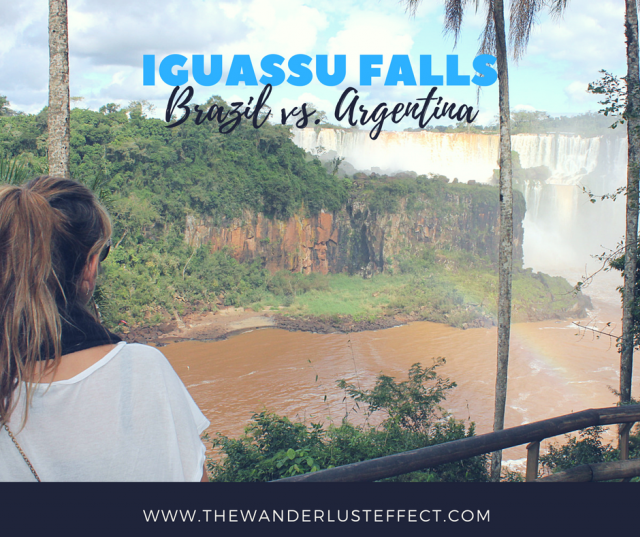 By contrast, Argentina’s national park is much more developed with a number of circuits guests can experience. You’ll have options of visiting the Lower Falls, the Upper Falls, Devil’s Throat (a tram will take you a good portion of the way), and San Martin Island (closed when we were there). You’ll need about four hours to enjoy the walking trails, and each circuit provides a unique perspective of the falls. There’s a ton of signage on this side and there are clear options for handicap accessible routes. There’s a small museum when you enter, and bridges upon bridges made of steel that help transport you from one part of the park to another. On this side there’s also an option for a water safari for an additional fee so if you aren’t experiencing the Brazilian side you’ll still have an opportunity for a water-based journey. There are a few restaurants serving up snacks, plus a number of shops – open air and established – where you can purchase handicrafts, jewelry and souvenirs.

After experiencing all of the available trails on the Brazilian and Argentine side, Scott and I agreed that our favorite viewpoint for the falls was the Lower Falls trail in Argentina.

Entry to the Argentinian side is 260 pesos per person, $26 based on the exchange rate we received.

Read about our time on the Argentinian side here.

The logical next question is: Do I really need both perspectives?

That depends, and ultimately only you can decide whether it’s worth it. I’ll say this much: If you don’t have to pay the reciprocity/visa fees in general (i.e. you’re not a US or Australian passport holder), or if you’ve previously paid one or both of these fees and acquired the necessary documentation during a previous trip then you should definitely see the park from both sides. That’s probably already a given for you, and in this instance your only additional costs are an additional entry fee and transportation which are relatively minimal. We visited Iguassu Falls because we really wanted to experience the destination and see the falls from a variety of angles. There’s a chance that this represented a once-in-a-lifetime visit so we wanted to make sure we didn’t leave with regrets about missing out.

If you hold a passport that requires you to pay reciprocity/visa fees in both Brazil and Argentina you may be facing a different set of questions, including the relative value of splurging on these visas. Scott and I had neither Brazilian or Argentinian documentation before this trip, and weren’t totally expecting the Argentinian reciprocity fee. We debated for a few minutes before finally paying the fee and felt it was justified because we both know that other regions of Argentina are on our must-see lists. In the future we’d like to do a trip to Buenos Aires and Argentinian wine country so this just encourages us to do that within the next ten years to make these fees work a bit harder for us.

Which side should I stay on at Iguassu Falls?

I bring this up next because it ties in to this entire discussion about which visas to acquire and which fees to pay if those are required for you. Ultimately, to figure this out you’ll probably want to ask yourself two questions: 1) What other cities do I want to visit as part of this trip? and 2) Which hotel do I want to stay in during my time at Iguassu?

If you want to do the Brazilian side, stay at Hotel das Cataratas. During our time there it was abundantly clear that a visit to Foz do Iguacu that had us staying anywhere else would have been a much lesser experience. Here’s my honest opinion: if you only want to splurge on one visa (Brazil or Argentina) and are leaning towards Brazil, it’s hardly even a debate as to where you should stay. Beyond the hotel being utterly magical and representative of the best service and hospitality experience I’ve ever had, you’ll also have access to the falls before the park opens. Considering the Brazilian side is one smaller path and an overall less developed set up, having that early morning access truly makes the experience so much more memorable. If you’re not going to benefit from that, I would say stay on the Argentinian side where you can gain a number of vantage points of the falls in their park setup.

Of course your other consideration is where else you may want to visit during your journey, and this element may weigh heavily on your ultimate decision as to which side of the falls you stay on. Everyone we met at Iguassu Falls was visiting as part of a broader trip. That’s not to say Iguassu isn’t worth 3+ days, but it’s likely not a place you’ll stay for a full week. For most people traveling to the area, the common add-on is either Rio de Janeiro for those exploring the Brazilian side, or Buenos Aires for those exploring the Argentinian side. If one of those cities has more of a draw for you than the other, that may help in your decision-making process.

At the end of the day, I’m glad we did both sides. As I mentioned, for us it was worth it because we know that Argentina is a place we’ll want to return at some point in the future. If the reciprocity fee was simply to grant us access to the Argentinian side of Iguazu without any future benefit then we definitely wouldn’t have spent $160 each on those documents. 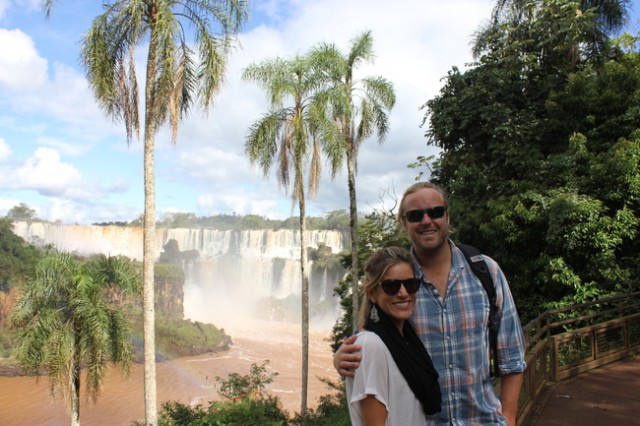 If I were in a position and had to pick a single side to explore with no real preference between Rio de Janeiro and Buenos Aires, it would ultimately come down to this: stay on the Brazilian side at Hotel das Cataratas or do the Argentine side exclusively. Without the full Belmond Iguassu experience, the Argentinian side of the falls have the upper hand for all-around experience.

For those planning to visit, I hope this helps a bit! I know the decision requires a fair bit of research and it’s nice to get other people’s take on it to weigh into that process.

For those that have been to Iguassu, what did you think? Was one side better than the other from your perspective? What factors played into your decision making?

You’ll see Iguazú, Iguaçu and Iguassu used when referring to the falls both on my site and throughout web and print-based guidebooks. Iguassu is commonly used as the English spelling, while Iguazú is the common Spanish (Argentine) usage, and Iguaçu is the common Portugese (Brazilian) usage. You’ll see the towns that the falls call home use these respective spellings (e.g. Puerto Iguazú in Argentina and Foz do Iguaçu in Brazil).