Finally – FINALLY! – we can share some exciting news about another trip on the books for the year: Ireland. If you’d asked us in January what adventures were on our schedule for the year, the autumn months would have taken us to somewhere in Asia, either China’s Yunnan Province or sunbathing in Bali, but within the last couple of months things have changed rather dramatically. My dad is celebrating a milestone birthday this fall and we couldn’t allow it to pass without honoring it properly. We celebrating in style for my mom’s 60th in Anguilla, Scott’s mom’s 60th in Kenya, and his dad’s 60th with a big bash in California. For my dad, we were brainstorming options. We’d more or less settled on New Orleans, an approachable trip that is #1 on his US bucket list.

Then, in January, a crazy idea was sparked and quickly caught fire. We found a place in County Kerry, Ireland, in the town of Kenmare. A great four-bedroom villa that offers access to the Ring of Kerry, the Ring of Beara and a short jaunt to the Dingle Peninsula, it seemed like the perfect location to explore Ireland’s varied landscape. Ireland is quite possibly the #1 place in the world on my dad’s bucket list (alongside of Scotland). Could we do this? Could we orchestrate a 7 – 10 day getaway with/for my dad and family? We gave it some thought and quickly pulled the trigger. It would certainly be a birthday to remember! Better yet, after talking with my mom and sister, they were both on board with joining. 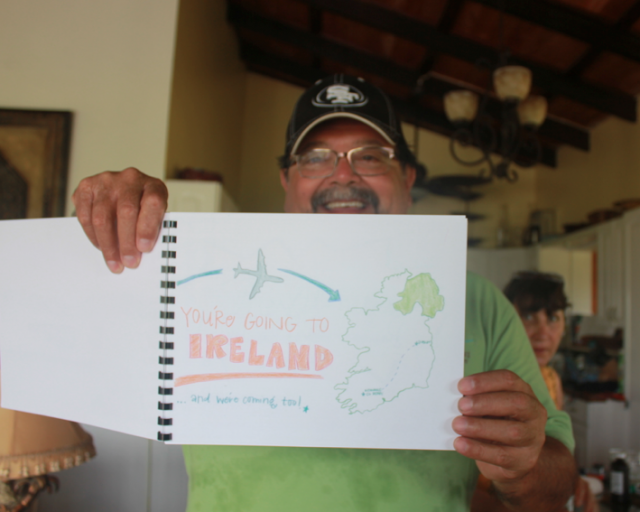 So, Scott and I secured accommodations, including a couple of nights in Dublin on the front-end of the trip, and surprised my dad during this trip to Anguilla. I put together a book illustrating the itinerary from start to finish so he could get a taste for what was in store. We planned out the week and left it open-ended; no return trip booked yet in case he wants to extend a week and explore neighboring Scotland on his own. He’s excited yes, but I don’t think it’s hit him as of yet. We were waiting for a reaction from him as he was reading about the trip, but it was utter and pure confusion for the most part. When he chatted with my sister later that day, he admitted that he just felt dumbstruck by the entire thing. Understandable!

We’ve taken the liberty of planning a loose itinerary for Ireland; the skeleton of a trip that we can fill out with everyone’s input. I’ve been to Ireland one time before and found myself pleasantly surprised – it exceeded expectations and I found Dublin to be such a cool European capital. We’ll fly into Dublin and spend two nights there exploring before renting a car and driving to the Southwest corner of the country for the remainder of the week (with a pitstop at the Rock of Cashel on the way). We’ll have 5 – 6 days in Kenmare and are hoping for a more immersive experience in County Kerry vs. spreading ourselves too thin trying to explore everything the country has to offer. We toyed with the idea of heading up to Galway and the Cliffs of Moher, but we’re opting against that this go around due to limited time.

If anyone has done any of these scenic drives, we’d love insight as to your favorite towns on those rings and best places to stop on the drives, plus any indication of how much time we should allocate so we aren’t running from Point A to Point B. The biggest objective, of course, is to have an awesome enjoyable weeklong getaway with family.  Get this: this will be the first time ever that my entire family – mom, dad, sister and myself (plus Scott now!) – have ever gone on an international trip together. It should be an adventure!

For those that have been to Ireland (or those from Ireland!), we would love your insight as we begin planning for County Kerry!

Scenic Drive: The Ring of Beara