I thought by day two on the Amazon with no wi-fi and no connection to the outside world, I’d be fidgeting. In reality, it was a welcomed vacation from technology and social media inundation. A forced digital detox is valuable sometimes. On the second day of our Aqua Expeditions cruise, we woke up before our wake-up call and were at breakfast at 7AM and excursion-ready by 8AM.

Excursion #3 {Trekking in the Jungle} 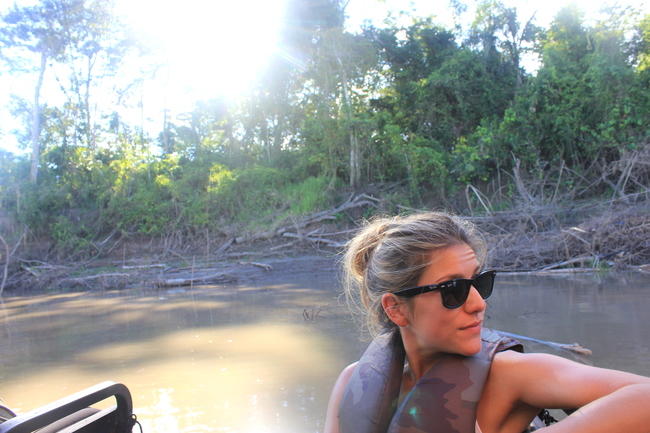 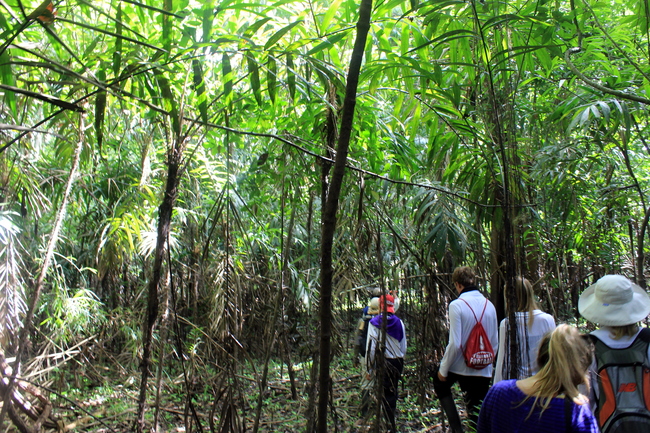 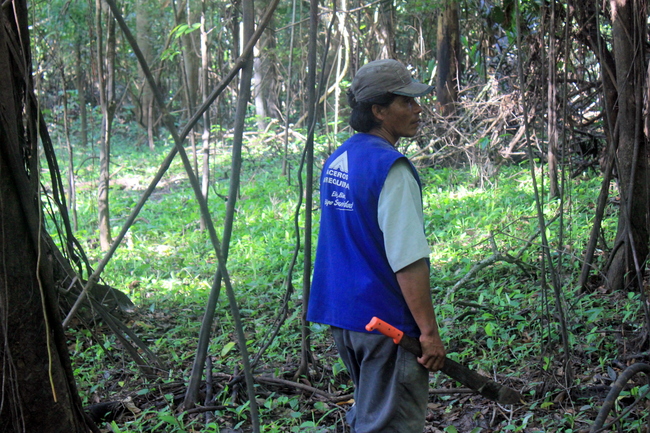 We headed off on skiffs with our ‘teams’ to begin exploring the jungle on foot for the first time. We rode past local fishing villages and pulled up to an area in the Pacaya Samiria Reserve where we were able to begin our hike. On the way, we stopped by to pick up a local who had a deep understanding of the rainforest’s terrain. He brought along a machete to help clear the brush and show the way during our hike.

The hike was scheduled to take around an hour; time where we could gain a better understanding and close-up look at flora and fauna in the rainforest. We were given rain boots to handle the muddy trek that we were about to experience and wore long sleeved shirts and long pants for added protection from the forest’s bugs. We had gotten Yellow Fever shots and were taking malaria pills, but you can never be too safe, right?

We saw fewer animals while we were in the forest and focused more on plant life. One tree, in particular, ended up being a nuisance to Scott and I (mostly to Scott). During one of the muckier parts of the trek, we had to cross a stretch of land by jumping from log to log so we didn’t get stuck in the mud. Scott and I both stepped in the mud a bit, though, and began slipping. To catch ourselves, we naturally reached for the nearest tree for support. Normally this would be smart, but it’s a bit less smart when the tree you reach for is covered in sizeable thorns.

I grabbed the tree lightly, getting pricked by about 3 of the thorns. Scott, on the other hand, grabbed the tree with both hands, being stuck by 10 – 12 of the spines. When we pulled out the stickers, the thorns left splinters which we were sure we could easily get out when we returned to the boat. When the guide found out we had pricked ourselves, he shared his concern with us: the splinters aren’t the problem, it’s the bacteria (the chemical defense) that the thorns have that was the real problem. Our hands began going numb in the infected spots and each splintered area began reddening and swelling slightly. When we returned to the boat, the paramedic greeted us on the observation deck to remove the spines. We spent the afternoon healing with lunch, wine, a cooking class, a pisco sour making demonstration and a nap.

After our eventful morning, we boarded the skiffs once again — later this time. We didn’t leave the ship until about 5:30PM as we were setting off to experience the Amazon later in the evening in a our search for caimans.

The sun was setting and our first mission was to find a nice, marshy area where we could fish for piranhas. The guides explained that a large variety of piranhas reside in the Amazon, none of which actually eat {live} people, contrary to what Hollywood would lead us to believe. Piranhas, like vultures, help keep the Amazonian environment clean, eating only dead meat that litters the water. The guide assured us that we were safe swimming around the piranhas, but I wasn’t ready to test that theory. Fishing, on the other hand… well, I was game for that. It was a game of catch-and-release so I didn’t feel as bad testing my fishing skills, something I’ve done only one time before. My previous experience was mediocre at best and as a result I’ve hated the idea of fishing. (Why waste hours sitting around and not catching anything, right?) As it turns out, I’m actually pretty good at fishing for piranhas. Caught two of those bad boys in about 10 minutes! 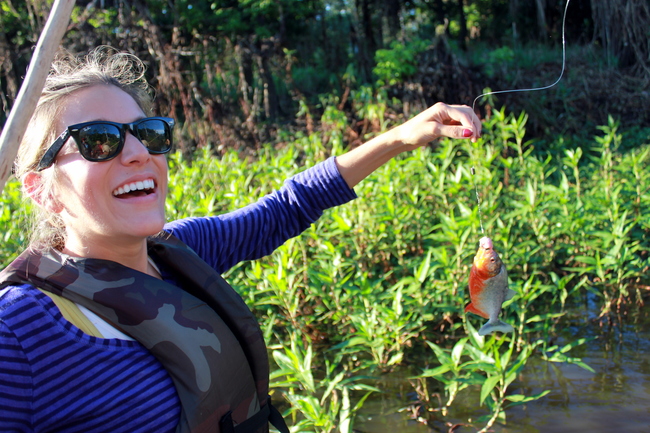 Scott’s not so bad, either. 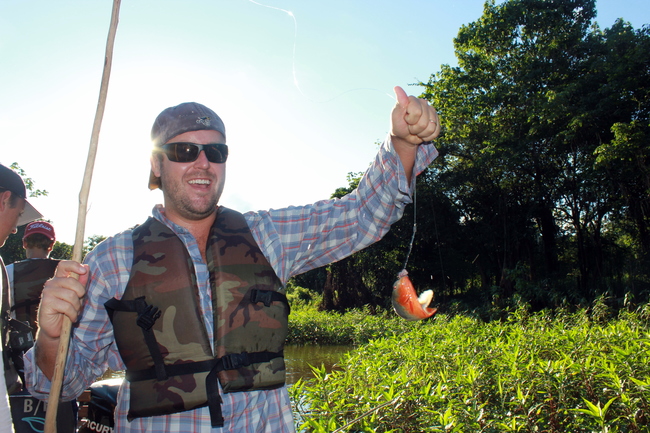 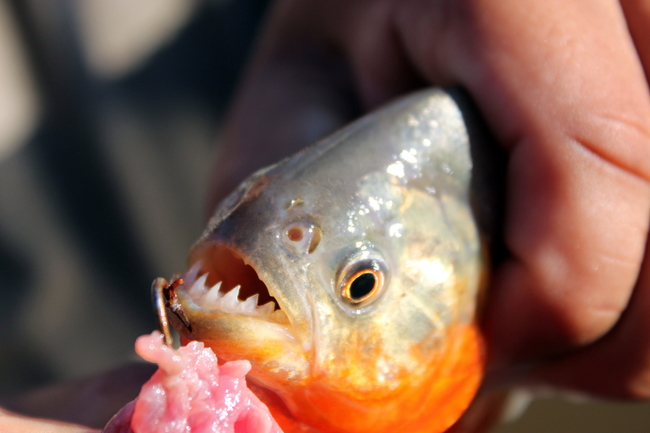 After our individual successes on the piranha fishing front, we met up with the other skiffs to say goodbye to our last night together on the Amazon. The guides surprised us with mimosas, snacks and a toast. Clearly they do this with all groups, but I would be lying if I said it didn’t feel special for us. In a few short days, we truly had a great time getting to know the guides who helped make the experience so much richer. {Shout out to Jorge, Ricardo & Neycer!} 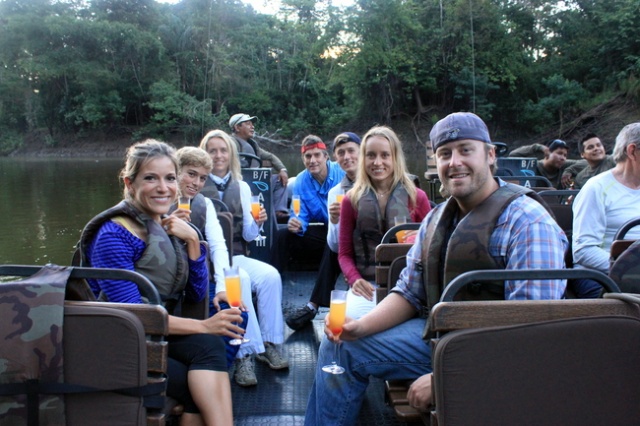 After our toast, darkness was setting in which meant it was the perfect time to find caimans. Caimans range in size and are very similar to alligators and crocodiles. We saw some little guys but heard that caimans can grow to 20′ in length. When the sun goes down, you can spot caimans by their glowing red eyes. We set out with a large flashlight and an experienced guide to see one close up. After a few unsuccessful attempts, our guide, Neycer, was able to wrestle a caiman and bring it into the boat so we could see it up close. 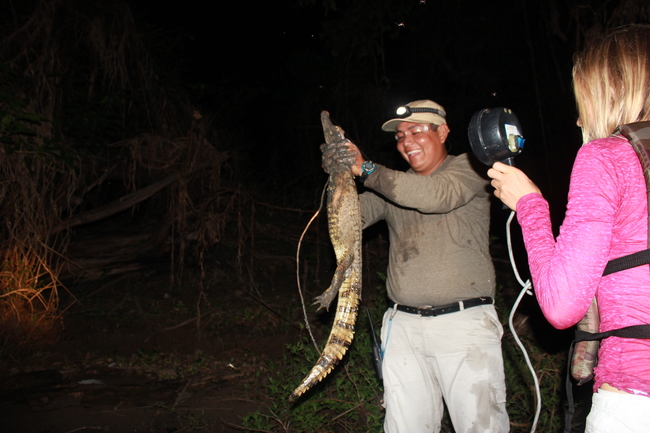 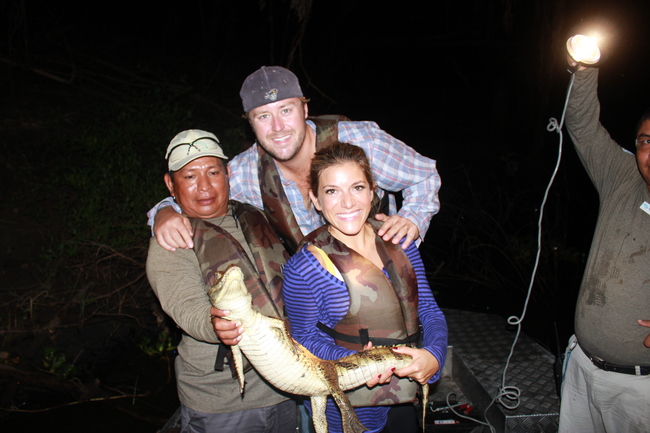 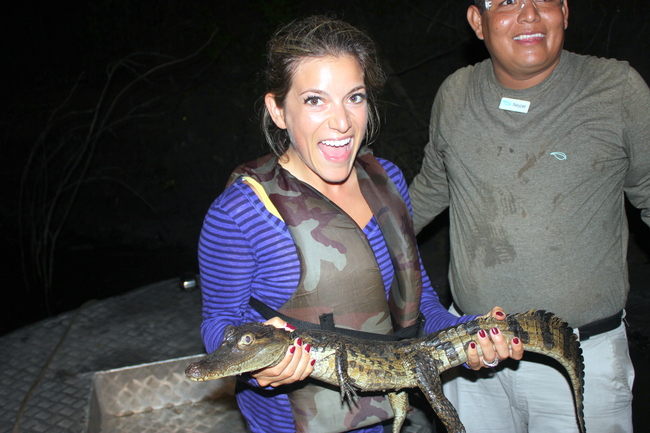 All in all, it was another wonderful day on the Amazon with some very memorable excursions. We headed back to enjoy another great dinner and spent some time in the lounge catching up with fellow guests as we continued down the river.

Check back as I highlight our last day on the cruise with a trip to a local community.

xoxo from the islands,

My Top 10 Hotels from the Past Decade