While I had anticipated a rather quiet weekend filled with spin classes and coffee dates, it quickly became much more exciting when I opted into a weekend in the city with a newfound friend. As if the heavens were letting me know that I was in for a great few days ahead, I made it to the city from Sacramento in record time (1:15!) and we soon made our way to the Academy of Sciences for a Friday afternoon adventure.

Admittedly, tickets aren’t the cheapest but it’s definitely a cool way to spend an afternoon. We visited the indoor rainforest, the Steinhart Aquarium and capped it off with a rendezvous in the Morrison Planetarium to catch a showing of ‘Life: A Cosmic Story’ (it’s the largest all-digital planetarium in the world). On the way out, we got to glimpse the awesome photo that was snapped in front of a green screen upon entry. If only all photos could be this amusing. 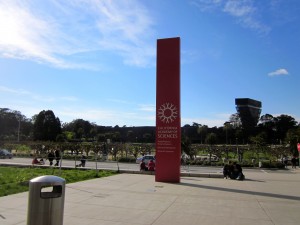 After an afternoon of fun, we got ready and made a quick stop for a drink at the Top of the Mark. The views from the hotel were incredible — I mean, can you really beat the Golden Gate Bridge and Marin Headlands at sunset?

Afterwards, we met up with a super fun couple for dinner at B44. As per usual, delicious food (the paella is superb) + awesome company is a recipe for success. The restaurant was totally tucked away and reminded me of why I love being in the city so much. There are a million places to see and always new restaurants and lounges to explore. While I was in NY, my friend’s boyfriend, a New York native, made a comment while we were taking in the views of the city from the rooftop lounge. He noted how he could visit new places every night and there would always be more to see and discover; that there are always gems that you stumble upon without intention which adds to the wonder of living in a vibrant community. That can certainly be translated to SF (which is one of my favorite cities in the world!) and makes me even more excited about a potential move to the city in the near future.

Cheap eats in Las Vegas for foodie travelers on a budget