The best travel tools for saving on flights, hotels and cruises

I’ll admit I’ve come a fair way since the teensy hostels in European towns, though I always look back on those travel memories very fondly. I booked budget accommodations because I had no other alternative at the time. If I wanted to travel, that meant the cheapest airfare, the cheapest accommodations, inexpensive dining options and the cheapest ground transport. I no longer have to book the cheapest accommodations available but those experiences taught me the benefit of finding the best bargains when traveling. Sure I appreciate a luxe getaway as much as the next girl but overspending doesn’t do anything for me. I’m most happy when I’ve found the ultimate in value – that is, a nicer experience at bargain prices.

So, for people in the in-between — with some disposable income for travel, but with an appreciation for bargain-hunting — here are some of my go-to tools for booking and saving:

1 There’s an age-old debate in our house: Is SkyScanner or Kayak better for finding the best deal on the flight front? I’ve certainly found deals on both sites but I will always back SkyScanner for finding great deals and providing awesome comparisons. I’ve actually had greater success with their mobile app (they have some deals published to mobile that you don’t see through their regular interface), but always find a number of great options regardless. I found my parents roundtrip tickets from Sacramento, CA to St. Maarten for $505. No, seriously. If you have flexibility with travel dates, SkyScanner allows you to look at rate fluctuations for flights over the course of a month which makes it super simple to spot the lowest airfare in a given date range.

For our upcoming trip to Israel (more on that in forthcoming posts), SkyScanner alerted me to the fact that we should forgo flights with our go-to, American Airlines. When flights with American were around $3500 roundtrip, SkyScanner showed me roundtrip fares as low as $1350. Yes, the flight has us flying with a few different operators but considering the savings, it was a no-brainer.

Priceline ‘Name Your Own Price’ 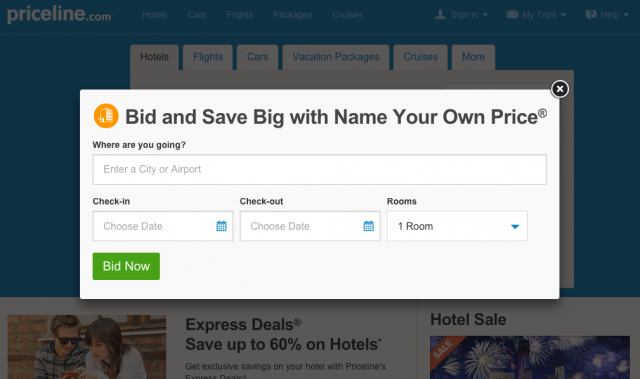 2 I use Priceline for one feature: the ‘Name Your Own Price’ option. If you haven’t tried it, aren’t sure of how it works or are afraid of trying it, you’re seriously missing out. I used the feature for the first time a few years back when I was planning a surprise trip to Vegas. I wanted a nice hotel but I didn’t have a nice hotel budget. I also wasn’t set on a specific hotel (a critical factor if you’re going to use this). I rolled the dice – I filtered properties to select 5* options only on the Strip North. I hoped for the Palazzo or Venetian but ended up at the Trump. It wasn’t the success I had hoped for but it was only $108 a night and it inspired me to test the tool in other locales.

Fast forward a couple of years and Priceline is almost always my first plan of attack for hotels. I like a nice hotel – I mean, who doesn’t?! – but I’m personally not comfortable with spending $400 on that hotel room. (The grad school budget traveler in me dies a little bit each time I overspend on travel-related expenses.) During our recent trip to DC, I looked to Priceline for assistance. I opted for a 4* or 5* hotel in the Dupont Circle or Georgetown – Foggy Bottom area. A Priceline popup told me that a recent user had booked a hotel in a similar category for around $300. I put in a price of $200, crossed my fingers and tested the waters. After a few seconds, Priceline returned with the Dupont Circle Hotel for us, a room that would have otherwise cost us $445 per night. After having returned from DC, I can honestly say I would stay there again in a heartbeat – great location, great property. All things considered, $200 was a steal based on the hotel’s profile.

I have found that this tool works best when there’s a good breakdown of neighborhoods and if you know where you want to stay. For example, in DC or NY – along with most major cities – the neighborhood scenes change drastically over the course of a few city blocks. You should know which area within Manhattan you’re looking for and have an idea of what hotels exist within that area (and their star rating). Armed with that info, you have a good probability of landing yourself a great hotel at a great price. 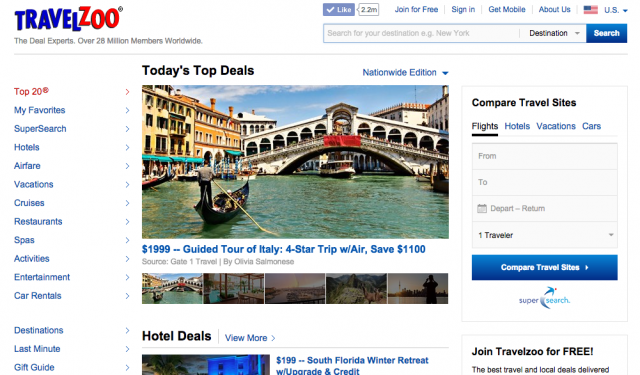 3The number of travel deals that hit my inbox on a daily basis is insane. When I was in DC without a working computer and limited access to wifi, I accrued a touch over 2600 emails in a 4 – 5 day span. The majority were blog related – a bit spammy in nature – but a large number were from travel sites that I’ve signed up for. I should be embarrassed (and sometimes I am), but I’ve also discovered some seriously good travel deals through good old email marketing. To me, Travelzoo is an oldie but a goodie. I receive their Top 20 digest that highlights some of their most outrageously good deals and I can’t help but have my interest piqued on a regular basis.

Where I think they’re particularly strong: cruises. If you’re flexible with dates, you can find some serious steals on very reputable cruise lines. Yes, you’ll find a number of Carnival Caribbean cruises but I’ve also seen great deals on Norwegian, MSC Cruises and Avalon Waterways, to name a few. I mean, $599 on a 7-night Norwegian cruise with a balcony room and $200 on-board credit? That’s a deal any way you slice it.

Also, if you’re into packaged travel (e.g. an 11 night escorted vacation in Thailand), they seem to have great offers in that realm, too. 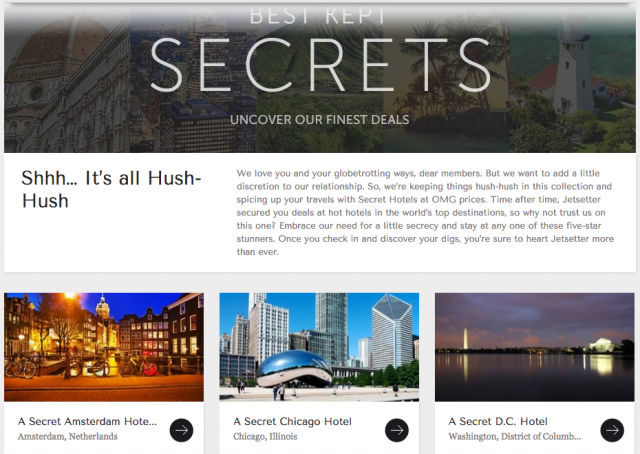 4You’re probably already familiar with Jetsetter. You probably know about their flash sales, which can provide great deals on high-end properties. What you may not be familiar with is their Secret Five-Star Stunner section; their mystery section. You can trust Jetsetter as a reliable brand, which is exactly how this concept works so brilliantly. You can book places in awesome locales like Vegas, London, Montreal and New Orleans (amongst many). You’ll see the rate – which is drastically reduced from a hotel’s normal rack rate – along with information about the hotel, the area, etc. It also gives you the TripAdvisor stats so while the hotel isn’t exactly named on the site, you can pretty easily narrow it down to some solid probabilities.

When it comes to scoring great deals, those are my go-tos on the travel front. If I can’t find a hotel deal that gets me excited (I’m talking 30 – 50% lower than rack rate), then we typically will call the hotels directly to ask about promos, or book through hotels.com for their loyalty program. Their loyalty program is a good one, but it’s no match for some of the steep deals and great values you can secure through Priceline and Jetsetter. If you’re booking purely on lowest price, there are other sites that may prove more useful (along with truly great hosteling opportunities), but if you’re looking for the best value – a moderately luxe, totally comfortable experience without breaking the bank – learning to work a few key online tools can help you score some world class deals.

Share your thoughts: what are you favorite sites for scoring travel deals? Where have you had the most success?