With only a few days in Florence, my cousin and I wanted to make the most of our time in the region with a tour of Tuscany. We found an amazing ‘Tuscany in One Day’ tour and booked it a couple of days in advance. While the package isn’t cheap, it represented a good value for what was included (£60/€70). Plus, how can you be in Florence and not take the opportunity to see the surrounding area? 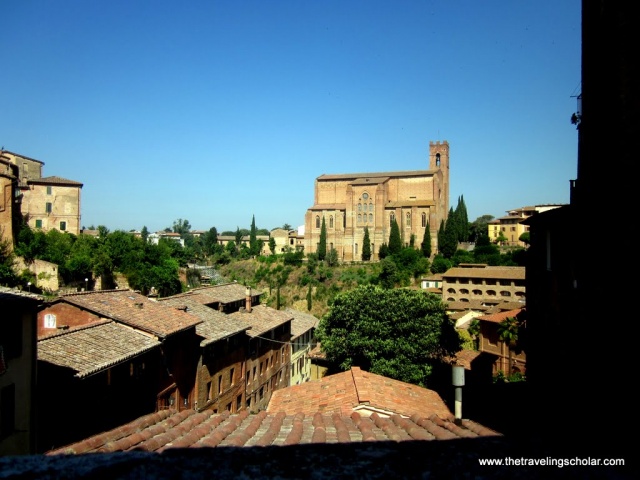 The tour was 12 hours long and began at 8:30AM. We got up bright and early and headed out of our hotel around 7:45AM to grab morning nibbles and get there a bit early. After departing, our first stop was Siena, a little town (p. 50,000) about an hour or so from Florence famous for its horse races and the color with its namesake (Burnt Siena). The city was much smaller than Florence but incredibly charming. The banking system as we know it today effectively began in Italy (in Tuscany, actually) and Siena is currently home to the oldest working bank in the world, which was founded in the 14th century.

I’m not sure where I thought banking originated, but Italy certainly wouldn’t have been my first guess. After seeing the bank, we explored the city center, saw 7 of the 17 districts in Siena and had the opportunity to see where the famous horse races take place during July and August. Despite its small size, Siena is split up into 17 districts that are represented by their own flag and animal. Each district has its own fountain, its own church, etc. and there are rivalries, sometimes intense, between the districts. The horse races that happen each year take place between ten of the districts; the winning district gets to hang their flag for everyone to see and admire. Selva, with its rhinoceros symbol, won last time. 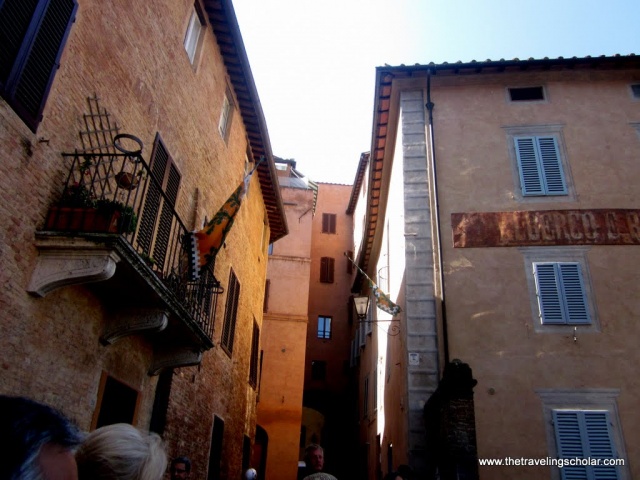 Our last stop was the church in Siena. While nearly all of my travels have included gazing at cathedrals, I have yet to become tired of seeing their façades. With the church being such a historically integral part of a town, they represent some of the most incredible architecture around. Admittedly, the interiors can begin looking the same after you’ve seen many of them but the histories always keep them interesting and help differentiate each place. 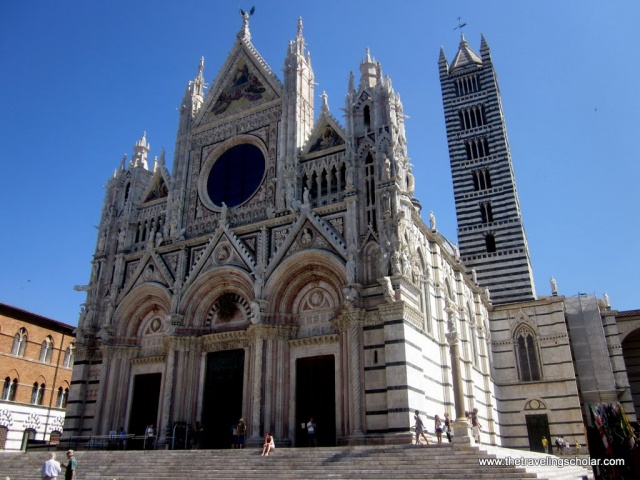 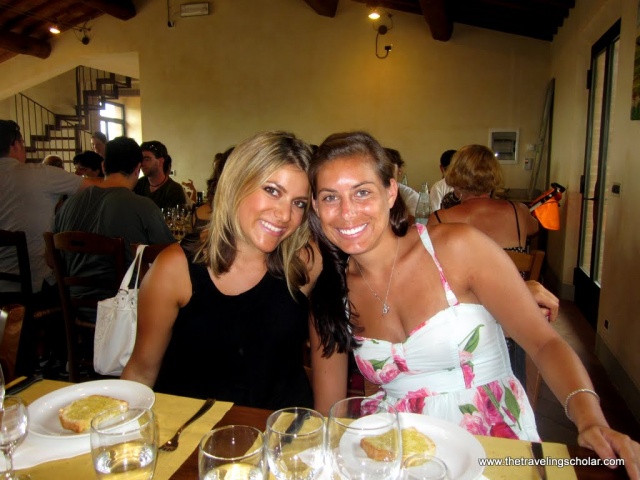 After our tour and some free time in Siena, we boarded our coach once again to head to an organic farm where we had lunch. We were the only vegetarians in the group but the venue was kind enough to make up a special lunch for us. We missed out on the wild boar sauce but had a great house-made vegetarian pasta option that was a great alternative. The team provided a tour of the farm, including the wine cellar (they produce 200’000 bottles of wine a year!), and we were able to take in some incredible views of San Gimignano. Breathtaking. 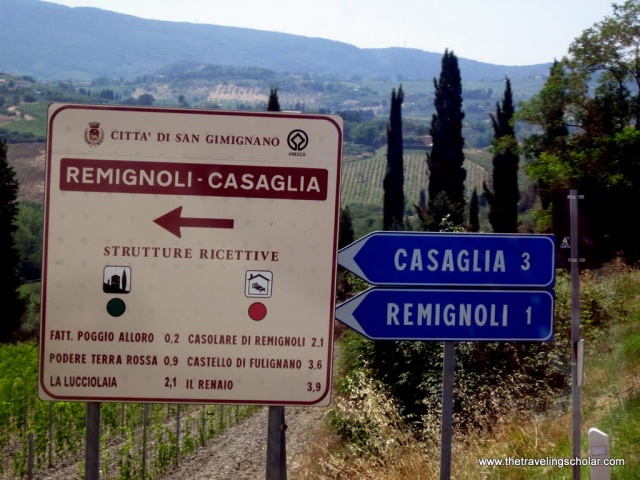 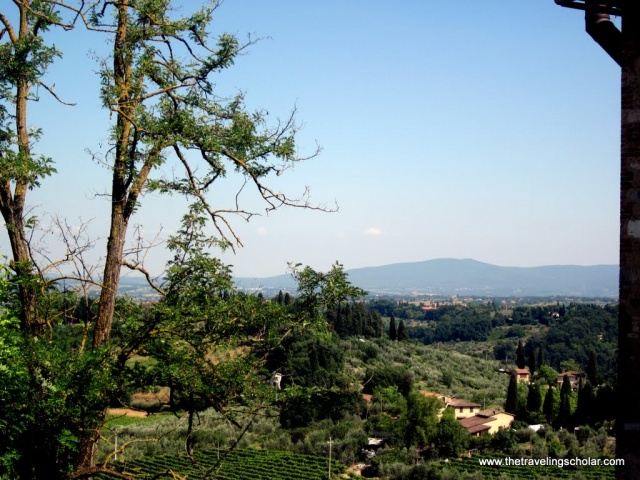 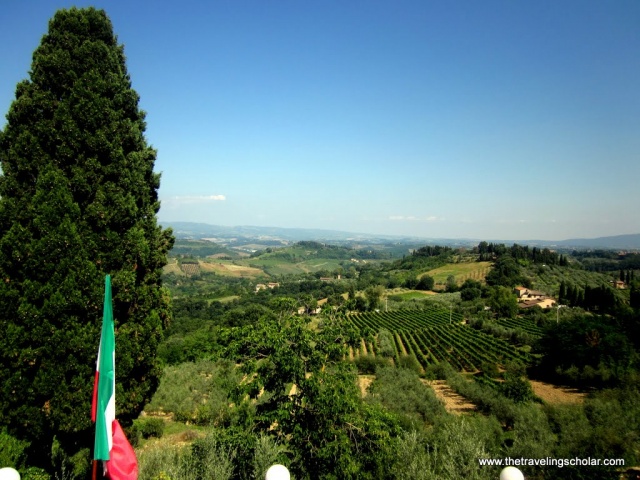 Fittingly, the lunch included wine tasting. Everything that was served up was organic and produced on the farm (except for the pecorino cheese which was brought in) and was incredible. After lunch, a glass of white, two glasses of red and a dessert wine, we re-boarded our coach to head to nearby San Gimignano, a medieval town that has been left untouched.

San Gimignano (San Jim-EE-jee-ohn-oh), while small, was completely charming. The views were great and the streets of the city are dotted with cute wine and cheese shops and little restaurants and cafes. Aside from white wine and saffron, San Gimignano is perhaps most famous for their gelato. A gelateria in town has won ‘Best Gelato in the World’ on two separate occasions, so you know that we had to test it out despite being disgustingly full from lunch. 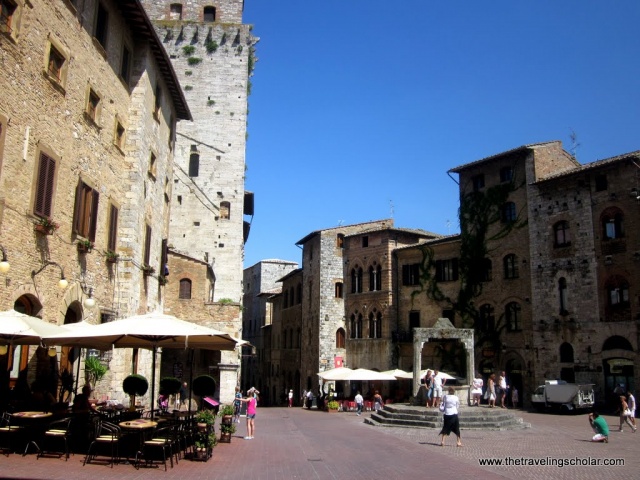 After exploring the town, we headed down to the gelateria as our last stop before heading back to the coach. In true San Gimignano fashion, the gelateria even has white wine and saffron-flavored gelato! Although I could have been more adventurous, the line was out the door so I made my order quick: tried-and-true mint. The gelato was great, but the best in the world? I have a lot of gelato to taste before I can decide that one… You’ll have to try for yourself!

After San Gimgnano, we headed to our last stop of the day: Pisa. S. and I had wanted to go to Pisa, but I didn’t think it was worth a day trip on its own (much like I didn’t think Siena was worth a day trip unto itself if faced with the issue of limited time). This tour ended up being pure perfection since it brought in all of the Tuscan cities we were interested in with just the right amount of time in each. We arrived in Pisa after a scenic one and a half hour drive where we passed by a sunflower patch. 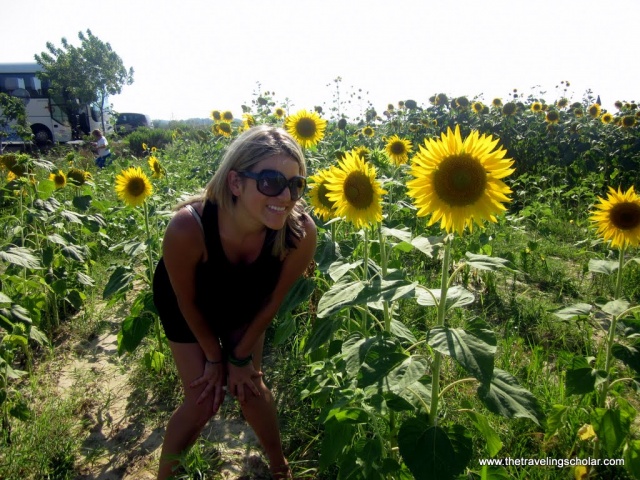 There was little to do in Pisa. We unabashedly took quintessential tourist pictures and laid out in the grass in front of the leaning tower. Bonus: depending on which list you reference, the leaning tower of Pisa is one of the wonders of the world. 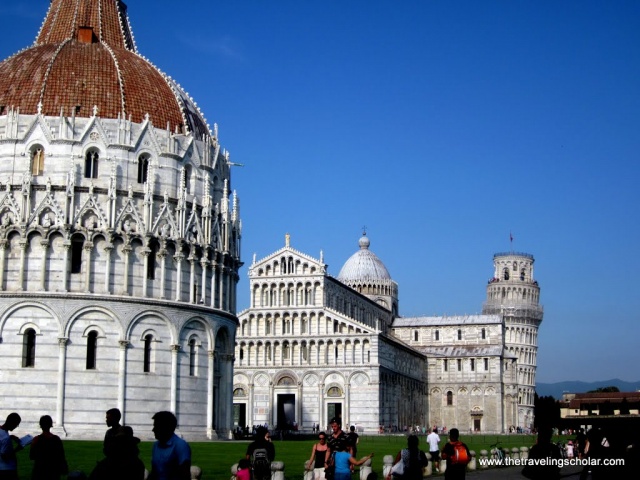 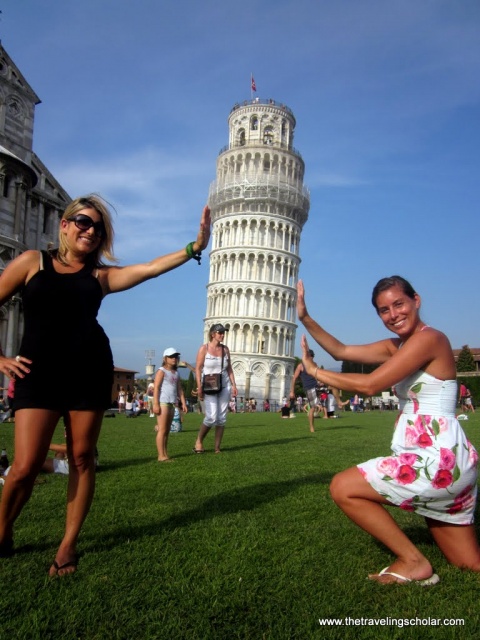 After our time in Pisa, we headed back to Florence with our tour bus and tour guide, Becky. It was a long, long day of exploring but it was so worth it. The £60 seemed more than worth it for all of the sightseeing we got to do, the information that we got and the amazing lunch that we had. If you’re a big wine drinker, you could definitely get your money’s worth; I saw a girl swoop on a half a bottle of red wine left at the end of lunch and enjoy the entire thing! After seeing the best of Tuscany, we are on our way out. It’s been incredible and I can only hope that I get to return again in the future for a longer period.

Love from the train,