San Sebastian is its food scene. If the city is known globally for one defining characteristic, it’s the world-class gastronomic scene. With more Michelin-starred restaurants than nearly any other city in the world and a slew of delicious pintxos restaurants, its not hard to see why the city is a draw for foodies the world over.

With two full days and nights in San Sebastian, we opted to forgo the Arzak and Mugarritz experiences and instead dedicate both nights to comprehensive pintxos crawls. A friend of Scott’s advised us, if you’re not doing at least four bars a night, you’re not doing it right. She couldn’t have been more right.

Four is a given. We started early and ended late both nights and visited around ten places each evening. Seriously. There were a few favorites that we visited twice after seriously incredible bites, but we maximized our limited time by popping into as many spots as possible and tasting one nibble that represented each bar’s claim to fame.

Here is a list of our top 5 pintxos bars in San Sebastian + the must-try specialty at each! Keep in mind this list is subjective, but these five were stand-outs for the four of us traveling in the region.

You can order a G&T, but if you’re delving into some local favorites you really have three options when you’re on a pintxos crawl on the beverage front: txacoli, refreshing Basque white wine with a touch of effervescence; a caña, a small pour of beer to wash down your small bites; or sangria, a go-to to be combined with Spanish cuisine if you prefer life on the sweeter side.

1A super hip, dimly lit space that oozes cool, A Fuego Negro has a vibe all its own. For non-meat eaters, their tuna tartare is a delicious option for a healthy bite. For meat eaters, the Kobe beef sliders are an absolute must by all accounts. If you need a break from txacoli, their sangria is lovely. 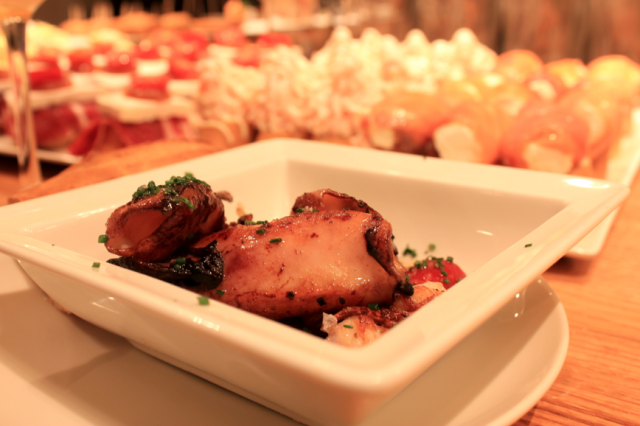 2Friends, acquaintances and tour guides shared their top lists with us before we set off on our dining adventures in San Sebastian. In many instances, their lists overlapped with published must-try pintxos bars and best bites in the city. Beti-Jai made none of those lists, and I couldn’t help but find myself a bit perplexed by the omission.

The stark lighting inside was a bit of a turn-off for me, but I couldn’t help but love the food and the bartenders there. We ended up visiting Beti-Jai both nights. Their grilled octopus is a delicious hearty nibble, great when washed down with a crisp glass of txacoli for good measure. 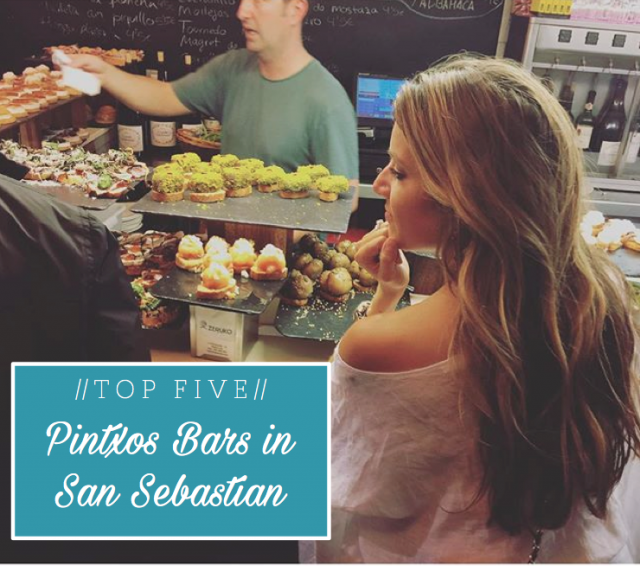 3We entered Gandarias first off on our first night in San Sebastian as we began meandering the streets. We mistakenly entered through the main restaurant on the back side where a couple of people were sitting and dining. Clearly looking confused, the waitress asked if we were looking for the bar and opened a nearby screen that led into a bustling pintxos area.

It was early, maybe 5:30PM, and the place was majorly alive. People were cozied up to the bar grabbing their bites while the bartenders expertly poured glasses of txacoli from overhead (evidently required for a proper pour). While most people say that you should avoid the cold pintxos and opt for the fresh-out-of-the-kitchen variety, I don’t think you can go wrong with any of the pintxos on display here. My favorite and perhaps one of the more unique was a bruschetta-type offering with elvers, baby eels. With a noodle-like consistency and flavour, these were a fun surprise and a local favorite worth a try!

Gandarias was arguably my favorite of all of the pintxos bars we visited during our time in San Sebastian. When it comes to food and ambiance, it’s an A+.

4Situated right on the corner near the imposing Iglesia de Santa Maria, Atari is a spot that seamlessly blends cozy and cool. I think my memories are tied more to the ambiance than to the food itself, though the food was nothing to scoff at. Shrimp bruschetta was a highlight for me, though foie lovers will be able to get their fix, too!

5Without a cold bite in sight, Borda Berri clearly focuses on fresh hot plates for their diners. We passed the famed San Sebastian eatery minutes before it opened and saw a small congregation waiting outside for the doors to open. We knew that was a sign of great things to come.

Their famous offering is braised veel cheeks, and the boys were not going to miss out on testing it out for themselves. For those that prefer something on the non-meat side, the octopus is a stand out.

Honorable mention: Bar Nestor // Dare I say that a tomato salad makes the cut? Umm… yes. The best tomatoes, dressed simply with olive oil, salt and pepper, are a stand out for a fresh healthy bite.

Which do you think are the best pintxos bars in San Sebastian? Leave a comment with your favorites below!