Scotland: Tour of the Highlands

The Journey to Loch Ness

I never thought I could walk to the Old Town from St. Andrew’s Square in 1°C temperature and not feel frozen to the bone, but after a day in the Highlands dealing with -13°C, anything above freezing didn’t feel quite so awful. After 13 hours of touring – mostly by bus – and 400+ miles covered, I can say that I have seen a good majority of Scotland, albeit briefly. The tour that I did today with Timberbush was the longest one-day tour offered in the whole of Britain – from Edinburgh to Loch Ness/Inverness and back. Once you undertake the tour, you realize how far Loch Ness is from Edinburgh. The views of the Highlands make the journey worth it, but if you have the time, a two-day tour (also offered by the company) would probably be more fruitful. 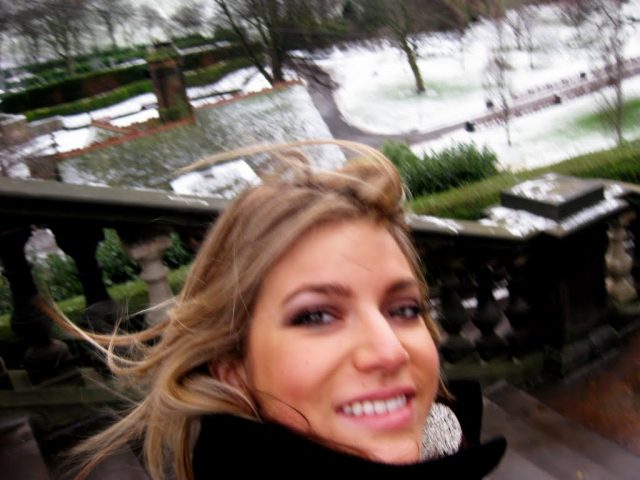 I started the day bright and early, with a 7:00AM wake-up call and was at the Timberbush pick-up point in front of Edinburgh Castle by 7:45AM. On the way to our first stop, we passed by Stirling Castle & the Wallace Monument, but the fog was a bit too thick to get a real glimpse of either site. The Wallace Monument was erected in the 1800s but is a testament to William Wallace, Scotland’s most famous hero from the 13th century, famously portrayed by Mel Gibson in ‘Braveheart’. We also passed by Doune Castle, made famous by Monty Python & the Holy Grail. Funny enough, our guide mentioned that the gift shop sells coconut shells for people looking to re-create the famous clip-clopping of horseshoes along the nearby paths. If you’ve seen the movie, you understand.

Our first stop at 10:00A was in a town called Kilmahog, where we grabbed coffee, morning nibbles and some scenic views of the passing lowlands. We also got to see Hamish, the famous Highland Cow that lives in the region. She was born in 1993, making her nearly 17. Apparently in ‘hairy coo’ years that’s the equivalent of being a centenarian. 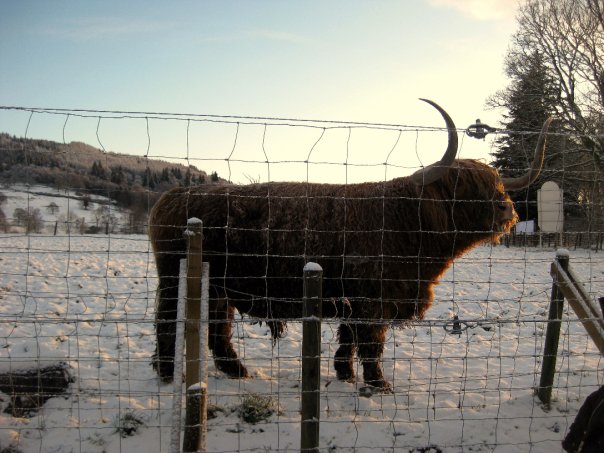 After our stop, the scenery noticed a dramatic change as we crossed the border of what is typically thought to be the lowland/highland turning point. One of the dead giveaways when leaving the lowlands and entering the Highlands? The signage. The road signs are written in two languages – Gaelic and English, with Gaelic taking precedence. It is spoken in the Highlands by some natives in order to keep the language alive. 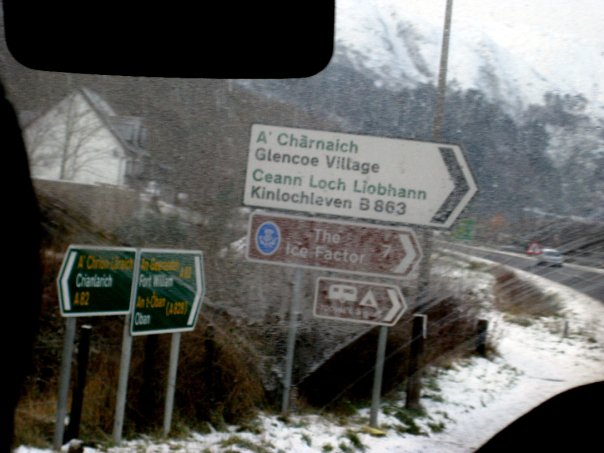 The snow was thick in the Highlands, as if the earth was completely blanketed with cotton. At some points, there was only a sliver of blue sky separating the snow-covered grounds from the clouds. The views are pretty dramatic when the terrain begins getting rugged and the pictures were pretty incredible. The sunrise over the mountains made for some amazing shots as we traveled through Rob Roy Country and entered Glencoe. The Three Sisters, the three peaks which overlook Glen Coe, are absolutely stunning. 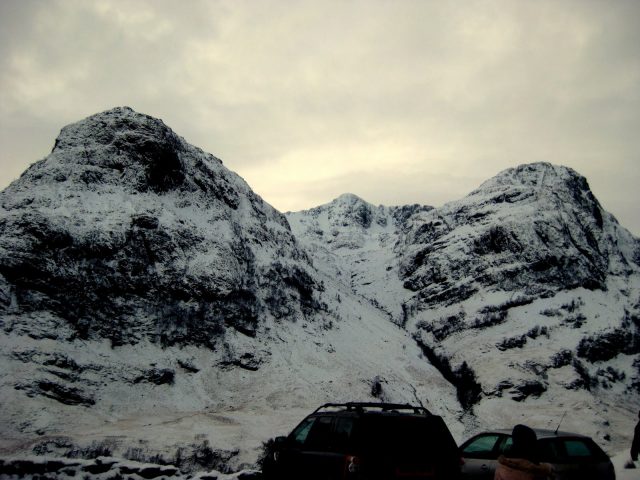 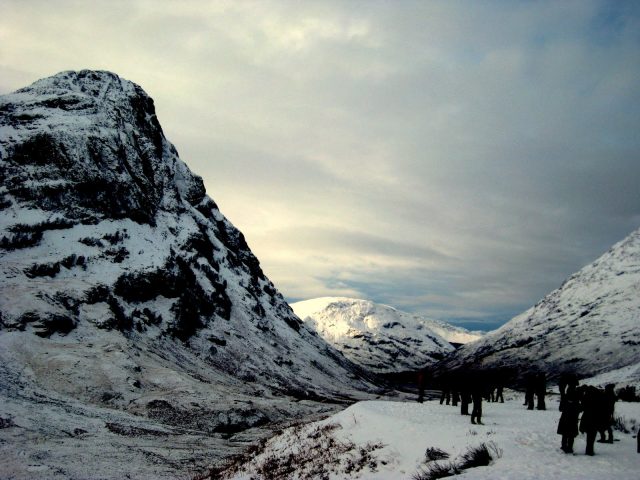 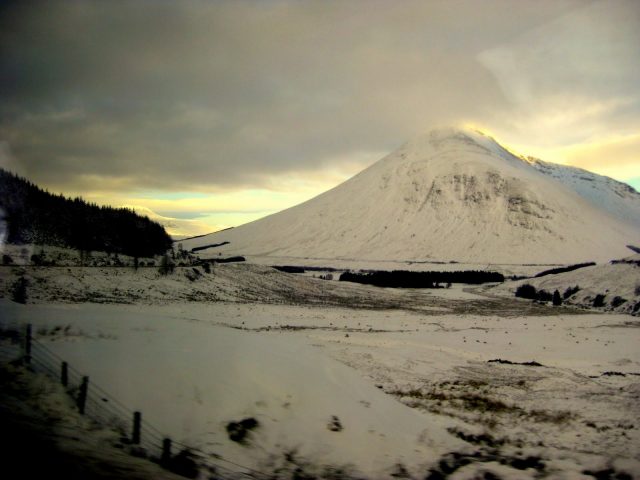 After Glencoe and a quick bite for lunch, we headed up on our trip to Loch Ness. Along the path that we followed there were a total of four lochs that we were able to see (Loch Linnhe, Loch Ness, Loch Lochy and Loch Urr). The white snow, bright sunshine and lack of wind made for the most amazing views. The water was incredibly still. Some of the smaller lakes and ponds were actually frozen to the point that you could probably ice skate on them. 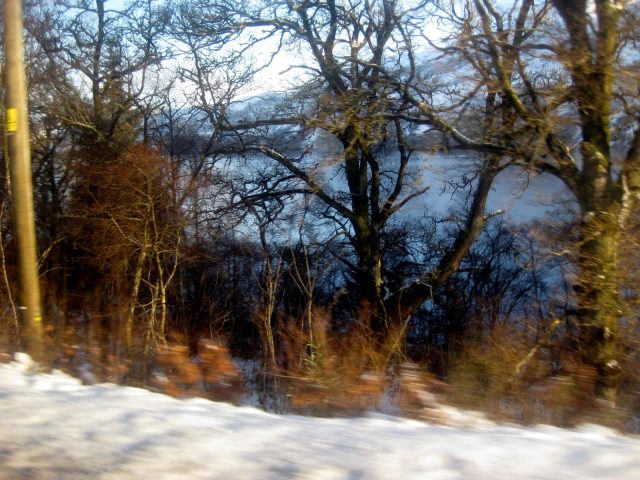 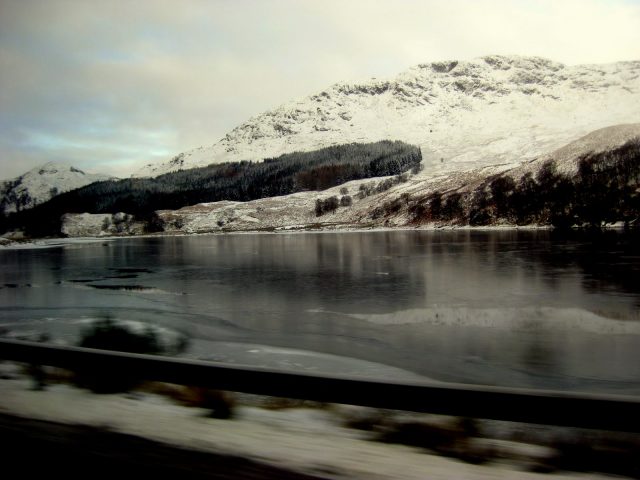 After hours of driving, we made it to Loch Ness at around 2:15PM and jumped on a cruise boat for an hour cruise on the lake. I tried desperately to look for Nessie, but the peat-saturated water made it difficult to see below the surface no doubt adding to the enigmatic nature of the loch and its monster. Aside from the tale of the Loch Ness monster (which apparently dates back to the 6th century), the lake itself is pretty fascinating. It’s 24 miles long and 1 – 2 miles wide, but is better known for its depth, around 750 feet deep throughout with parts going down to 1000 feet. If you were to take all of the bodies of water in the rest of Britain (all bodies – lakes, rivers, ponds, etc, — from England + Wales) and added them together, they wouldn’t fill up Loch Ness. 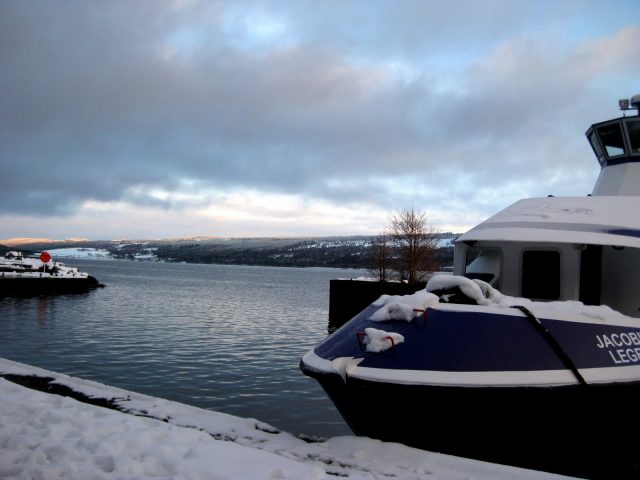 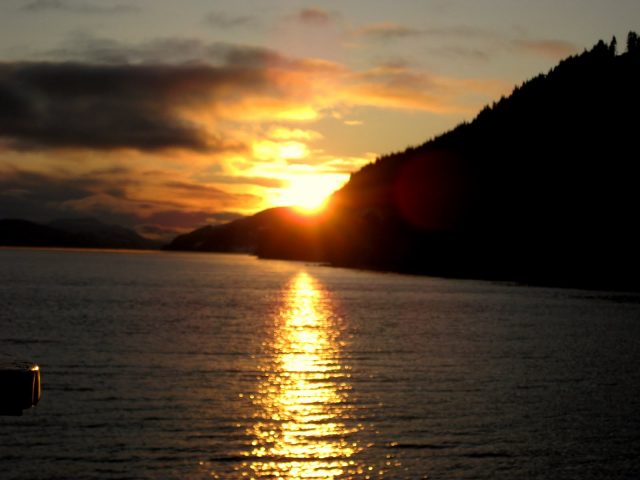 The tour was gorgeous and totally worth the £34 (with student discount) day trip price. The downside to December is that the days are so incredibly short. The sun began setting during our 3:00P cruise and the skies were completely black by 4:30. If you were to go in the summer, there would be a stark contrast; daylight that goes on forever and completely different, greener views. Either way, I would totally recommend Timberbush Tours. Our tour guide, Billy, was awesome (his accent didn’t hurt) and there were enough stops to take in some great photos. If you have the chance to do a 2 or 3 day trip, I would definitely opt for that though… 400+ miles in 13 hours is a lot to take in.

Hope everyone’s holiday season is going well! I’m heading back to London this evening and although I’m sad about leaving beautiful Scotland, I’m happy to be able to sleep in my own bed and celebrate Christmas with friends back in the capital.

Lots of love from the UK,