Our first day as islanders

I’m happy to say that I woke up on Sunday at 9:40AM, sleeping more in one night than I had in the 4 days prior. Sunday was our first full day on the island, and we spent the majority of the afternoon touring the island so I could gain my bearings.

We started by heading over to the East End of the island. I’ve used this map (to the left) before, but it makes understanding the island layout much easier. Our new home is on the western side of the island, so we wanted to make a conscious effort to get out and explore other areas. Considering the island is only 16 miles long, it seems crazy to think that going to the ‘other end of the island’ is a trek, but in relative terms, it is. The roads aren’t zippy freeways — 16 miles here is much further than 16 miles in California.

With it being Sunday, we wanted to make the trip to Scilly Cay, a tiny offshore island that does a killer lunch with live music on Sundays. We made our way to Island Harbour to grab a ride over. While we were waiting for the boat that didn’t come — and learned that it wouldn’t come — we hung out with some locals at the nearby Pelican Bar. They let us in on the scoop: the waters were too rough; Scilly Cay was closed for the day and the boats weren’t running. Downside: no Scilly Cay. Upside: Got to meet some awesome locals.

Onto Plan B. We decided to spend some time beachside at Shoal Bay before lunch. We ended up getting sidetracked on the way and made a quick stop off at On Da Rocks, a restaurant on the East End that offers $5 crayfish on the weekends. How could we pass a deal like that up? We each grabbed a crayfish (call it a quickie appetizer) and soaked up some sun upstairs. I should clarify something really quickly: crayfish are not like the crawfish we think of in the US. When I told my parents about $5 crayfish they were in shock. How could a little crayfish be $5?! My dad quickly made the connection; crayfish here are less like crawfish and more like langoustines. They’re like smaller, spiky lobsters. And they’re great. $5 is a steal so I’m pretty certain On Da Rocks will become part of our rotation. 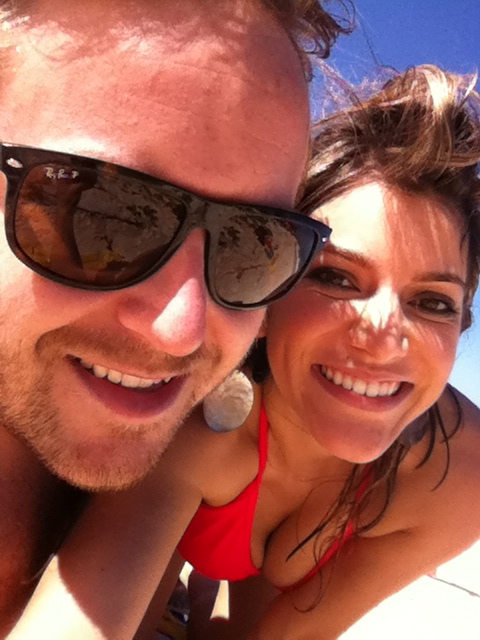 Off to Shoal Bay we went to soak up some sun for a few hours. First lesson of island life: when the waters are less than calm, don’t wear sunglasses without croakies unless you want to have an excuse to buy a new pair. I wore my new $10 pair of sunglasses (that I love, mind you) into the ocean only to have them washed away 3 minutes later. Sad.

Second lesson of island life: hats and sunscreen are musts. My San Franciscan skin is clearly not used to real sun. An hour was plenty.

We soon headed to Gwen’s Reggae Grill where we sat by the water, noshed on fish sandwiches (with her famous homemade hot sauce) and listened to the local string band. Such a perfect Sunday!

For our last stop of the day, we left the East End and headed down to Sandy Ground to listen to live music at Johnno’s. Armed with a pina colada, we sat inside and listened to a few local musicians serenade us with jazz. Hard to beat.

It was only 4PM when music ended at Johnno’s but between the sunshine and the lack of sleep over the past week we were pretty spent. Back home we went to have our first dinner in. It’s almost like we’re real islanders.