Choosing a Locale + Exploring the Island

Coming from Anguilla, Scott and I entered Dominica with small island mentality, the wrong mindset with which to enter Dominica. At 29 miles long and 16 miles wide, Dominica is not small. In fact, it’s the largest of the Windward Islands. In Anguilla, you can stay on the East End and easily trek down to the West End for dinner without much concern. In Dominica, that’s not the case. It’s worth understanding that the size and layout of the island, and it’s important to have a decent grasp on what you want out of your experience before picking your hotel and planning your trip.

If you can see the roads outlined in red on this map, you’ll see that it’s not overly well connected by road. For example, if I want to leave my hotel in Delices in the southeast and drive to Trafalgar Falls (as Scott and I did on our first day), there’s not a direct road to take me from Point A to Point B. Rather, I have to drive all along the southern part of Dominica and up the island’s Caribbean side to hit Roseau before heading in to Trafalgar Falls. When you look at that information within the scope of the island, that translates into about an hour and a half of driving due to the long trip and the rather rugged terrain. Bear in mind, you’re not zipping down freeways; instead, your slowly negotiating roads and dodging potholes at about 25 miles per hour on average. Note: the road going up the island’s east side is actually very nice compared to other roads we encountered – it’s not very windy, not overly congested and pretty well paved up to at least Mero.

All of that being said, where you end up staying will likely dictate what you end up doing during your trip and what areas you end up exploring. In my opinion, it’s not realistic to think that you’ll stay on the island’s southeast end (like we did) and drive clear across the island to float the Indian River. If we had a week we may have done that, but with four days that prospect involved entirely too much driving time. Instead, visiting Roseau, exploring Soufriere and Champagne Beach, and doing some hikes in Morne Trois Pitons National Park would make for solid agenda items while not wasting too much time in the car. If you’re staying at a somewhat secluded hotel, it’s worth noting that you’ll likely eat most of your meals on property. We had anticipated dining out at new spots each night but we soon discovered that was not a feasible plan. Due to the somewhat difficult roads (and no road lights), getting around at night is a somewhat daunting thought. Fortunately, the food at our hotel’s restaurant was top-notch and changed nightly, a wonderfully executed concept for a somewhat captive audience.

If you have a week in Dominica, I would honestly consider splitting time between two locations: one in the south and one in the north to see more of the island. Even just two or three days in the north will give you the opportunity to explore Portsmouth, float down the Indian River, visit Kalinago Territory and explore towns like Calibishie and Cabritz.

If you have just three or four days, I would suggest mentally mapping out your priority list for sightseeing and then choosing your hotel accordingly. For us, as first timers, being in the south made a great deal of sense and worked out well. Roseau, though perhaps not as secluded and quaint, would be a great central locale as well. There are a range of hotels available, and the roads from Roseau will get you anywhere relatively quickly.

Getting Around from Jungle Bay 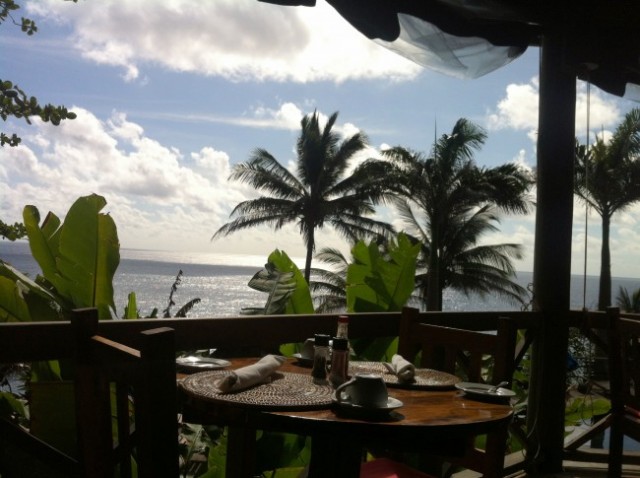 After a bit of research on Dominica and available hotels, we opted to stay at Jungle Bay. We chose not to do the all-inclusive Jungle Bay Package and instead opted for the cottage with add-ons that piqued our interest (e.g. the Boiling Lake Hike). We quickly learned that most visitors (many repeat guests included), opt for the all-inclusive package. After spending some time in Dominica, this clearly makes the most sense.

Jungle Bay offers something that I don’t think is replicated elsewhere on the island. The cottages offer a great eco-lodge experience, with individual cottages perched along the property with great views and private balconies. Our lodge was one of the highest with over 125 steps to the top though there are many closer to the ground. There’s no air conditioning (not needed) and no TV (really, who’s watching TV here?), but there’s a mosquito net, a fresh breeze and an incredible outdoor shower. For those that opt for the Jungle Bay Package, the fee includes all meals, all excursions, morning yoga classes and a daily 30-minute spa treatment.

If you take advantage of the offerings, it ends up being the perfect experience and jumping off point to explore Dominica. We rented a car ($60 per day + a one-time $12 license fee) which gave us flexibility, but we still had to pay for certain excursions. Our guide to the Boiling Lake was $75 per person, a fee that would have been included in the Jungle Bay Package. Plus the 30-minute daily treatments? I won’t pay for them if they’re extra, but honestly would have loved a few massages to counteract the sore muscles after days of activities. 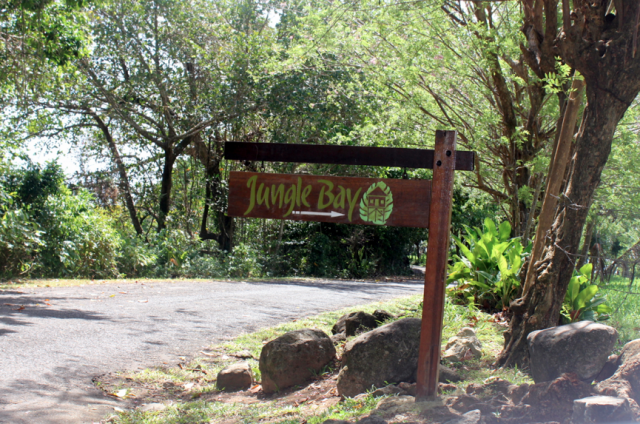 Other Properties to Consider

If you’re not interested in excursions and are more of a DIY traveler, a hotel closer to a main artery may end up giving you more flexibility when it comes to sightseeing across the island plus eating out for dinner on a few occasions. A few other hotels for consideration:

Have you been to Dominica? Any properties that you would recommend to visitors looking for a DIY experience versus hosted tours?