In reality, San Pedro Sula isn’t a huge distance from our home base in Anguilla, but once you’ve added in the travel time to St. Maarten and the connection time in Panama City, it ends up being a solid twelve-plus hour travel day. By the time we’d arrived in San Pedro Sula, Honduras (after an hour delay), it was 8:30PM.

We weren’t entirely sure what to expect when we disembarked. How established would the San Pedro Sula airport be? Would it feel as unnerving as every advisory warning would have us expect? We stepped off the plane and into a fair bit of chaos as we raced to find our transfer. We identified our driver, a man carrying an Indura sign, who began leading us out of the airport and into the parking lot. We hadn’t changed our money in advance since we expected to exchange our US dollars for Honduran Lempiras (22 lps to $1 exchange rate) when we arrived in the country.  Rushing out of the airport, and in a hurry to get to Indura Resort to see our travel buddies, we asked our driver if we could pause a moment to head to the exchange counter. It didn’t exist, at least from what we could see.

Instead, a guard whistled and called a fannypack-wearing man over to assist. I’ve seen this happen before, of course, but we had just landed in Honduras, a land infamous for its crime, and we honestly felt a bit apprehensive as a small group of men looked on. We pulled out a couple of $100 bills to exchange for lempira. We worked quickly and as discreetly as possible and jetted out the door. Objective 1: complete.

To be honest, our driver wasn’t exactly what we were expecting. I think we both assumed that there would be a resort-owned van for transfers like ours, with a driver that worked exclusively for Indura. Our transfer cost a rather steep $65 per person so I didn’t think that notion was entirely unfounded. Instead, our driver, dressed in jeans, a graphic tee, and no name tag, led us to his car, a mid-90s Japanese sedan that we scrunched into for the hour-plus long journey. 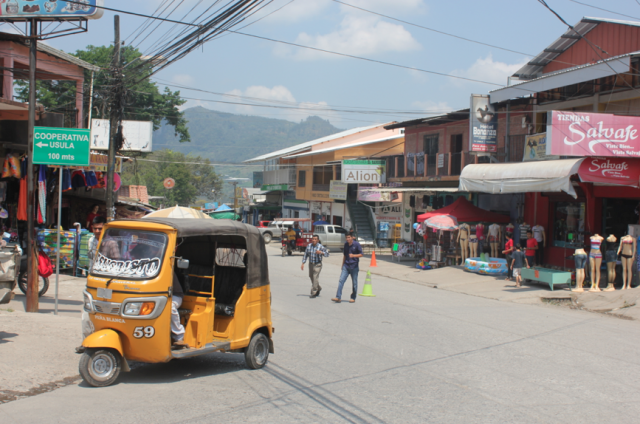 Okay, okay, so here’s the thing: I wasn’t overly worried about traveling to Honduras from a safety perspective. I realize that the vast majority of crime referenced by advisories is not aimed at tourists; it’s largely gang and drug-related criminal activity, and seriously, why would we be targets? We have nothing to offer. Still, we’re not totally naïve and I like to think that we’re rather smart and aware travelers. No, the crime isn’t targeted at tourists but that doesn’t mean we shouldn’t be cognizant of our surroundings and follow our instincts. So, a teeny tiny little voice was going off in mind head, the product of hyper-vigilance, too little sleep and too much caffeine. Is this guy really our driver? He’s not even wearing a name tag and we’re in a beat up taxi that could hardly be approved by Indura Resort. This guy didn’t even have our names on the sign he was holding; it could have just as well been a print out of the resort’s logo, while he waited for an unassuming couple to walk out and straight into his clutches. I whipped out my phone and brought up the compass app. At least I’d be able to tell if we were headed in the right direction. We zipped through the town of El Progreso, one of the main cities outside of San Pedro where traffic can sometimes be an issue. The roads were mostly good, though we encountered a few instances where we had to dodge potholes big enough to swallow my sister and I whole. Then, an hour and twenty minutes later, we arrived. Shiny new signs for Indura led the way and I realized that my concerns about the country as a whole were mostly assuaged by this single successful transfer.

I’ll admit I felt marginally disappointed in myself. Why do I let myself fall down that hole of nervous insecurity and doubt? In some ways, I find it a good instinct (being aware, that is); it’s certainly a sensation that grows more apparent as I get older and the feeling of invincibility wanes. All of that being said, those two moments – our first taxicab ride and the money exchange – were probably the most nervous that I felt during our entire time in Honduras. As I’d come to find out, the country gets a seriously bad rap. The areas that we visited felt safe, the people that we would encounter were friendly and warm, and the landscapes that we would soon see were breathtakingly beautiful and gorgeously unspoiled. The Honduras you’ve heard about is real, of course, though from what we’ve seen and heard from locals, it’s largely concentrated in the cities (San Pedro Sula and Tegucigalpa). The Honduras that we experienced showed us something entirely different, and left us inspired to explore more of Central America. Stay tuned as I recap all of the beauty and the insanely memorable experiences that left us loving Honduras.