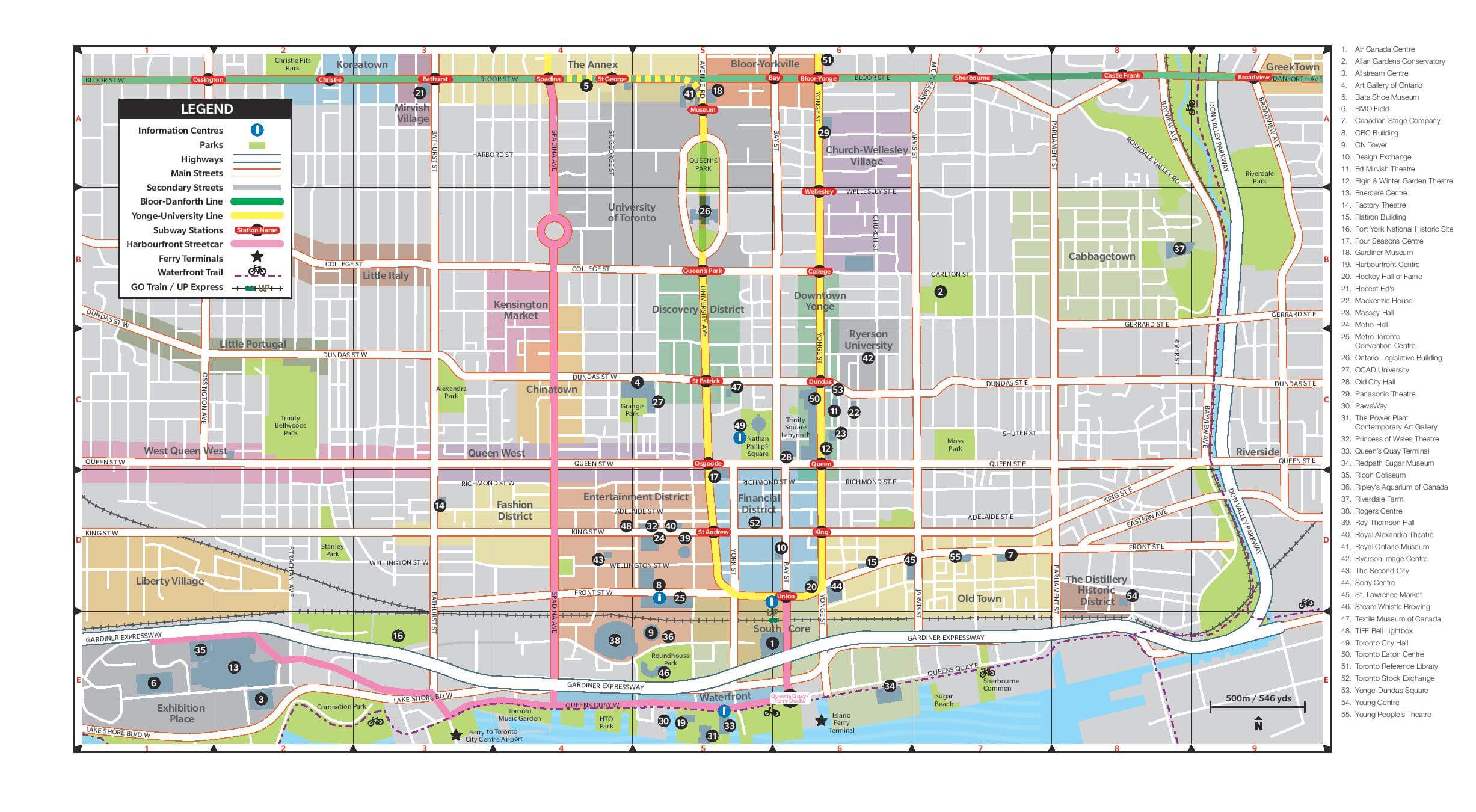 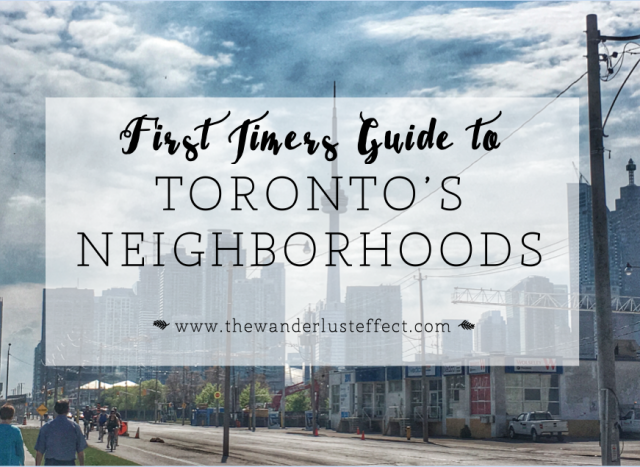 We were based in Downtown Toronto, at the InterContinental on Front Street in the Financial District, in close proximity to most of the city’s biggest draws. The Financial District, as with most major cities, is one of the more nondescript areas, with streets of high-rises that turn into a sea of glittering buildings by night. That being said, we were pleasantly surprised by the fact that many of Toronto’s iconic sites and experiences (e.g. the CN Tower, Steam Whistler Brewery, Ripley’s Aquarium, the Hockey Hall of Fame, etc.) were located within close walking distance, in the heart of the city’s financial center. In a city like San Francisco or New York, the Financial District would never be much of a draw as far as accommodations go, but in Toronto the Financial District actually represents a fairly central position, easy walking to many interesting neighborhoods and offering easy access to the Union Pearson Station via the city’s UP Express train.

TIP: If you’re heading to Toronto, the UP Express is a breeze, and makes getting from the airport to the city a quick and cost-effective (12 $CAD) endeavor. The train takes around a half an hour and includes wifi on board and outlets so you can maximize your time while you’re en route. The train drops off at the main station in the Financial District, walking distance to many main hotels and key sites. 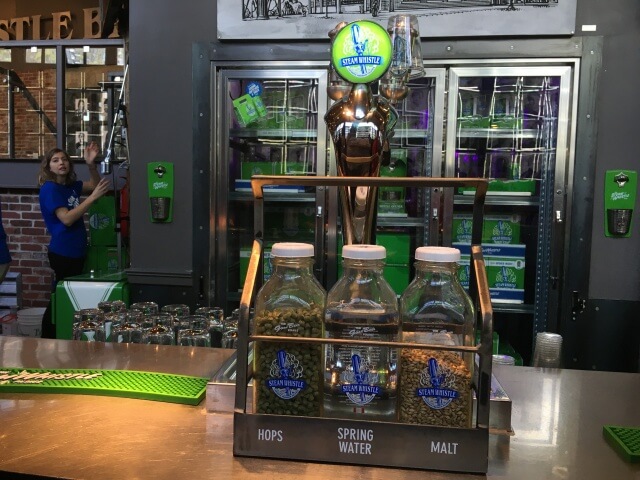 To See + Do: Visit the CN Tower and head up to the top for the ‘Edge Walk’ if you’re feeling adventurous! For those that prefer to keep their feet on the ground, try a local brew at Steam Whistle Brewing Company, a green-hued establishment that has a single beer on tap. 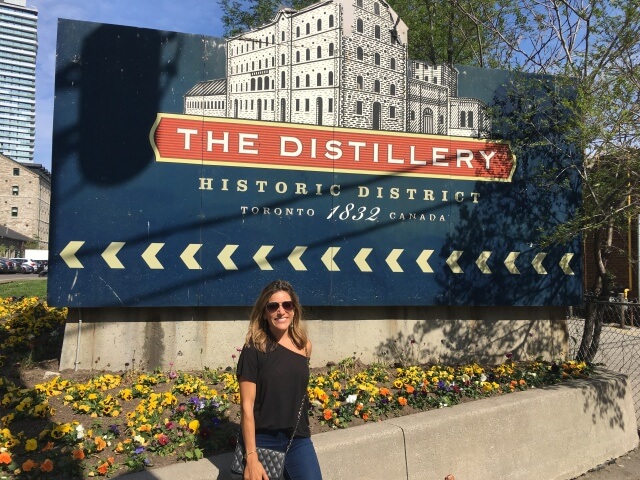 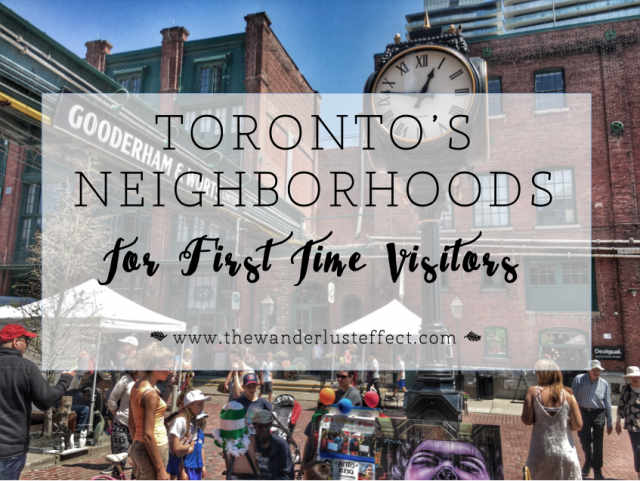 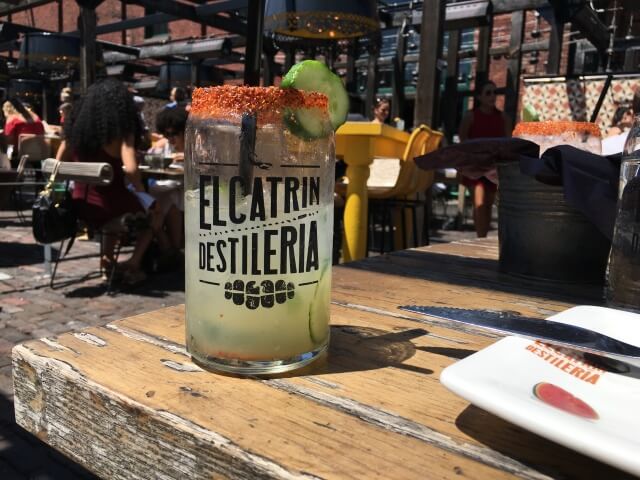 DINE: Visit Cluny for a fabulous brunch, complete with a must-have Bloody Caesar, a Torontonian brunch classic. For lunch on a sunny day, check out Mexican restaurant, El Catrin for serious patio vibes. Their margarita selection and tableside preparation of guacamole will keep you fueled for an afternoon of shopping. 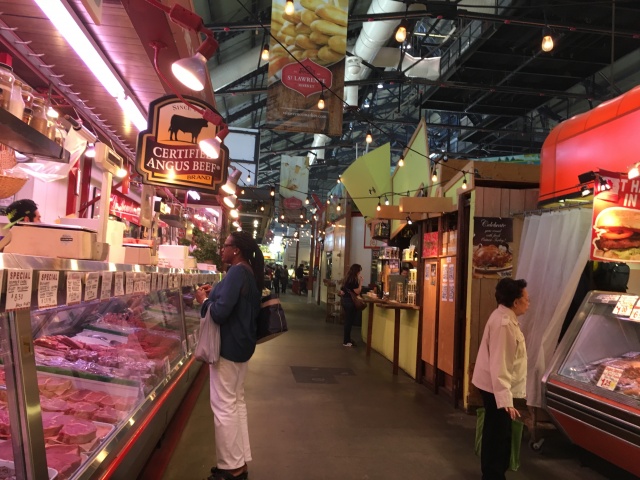 Gourmands, be prepared for a culinary tour within the walls of St. Lawrence Market. The famous food destination sits at the edge of Old Town Toronto (not really all that old, if we’re being honest), and is a mecca for cheese, fresh seafood, and host of fresh meats, including elusive game options like venison, bison, kangaroo and camel. The market is a mix of food shops and take-away restaurants, and first-timers will be faced with a tough decision on what to eat first while still being able to try a fair sampling of food on offer.

In our experience, a comfortable crawl through the market is best if you have but a single afternoon to explore and experience. Don’t forget the downstairs area either! The upstairs portion (the main thoroughfare) captivated us instantly with the bright signage and engaging vendors, but there’s a variety of food downstairs that’s totally different from what you’ll find during your initial walk through the market. On the upper floor, test out some fresh oysters, which can be shucked for an additional $1 per 3 oysters, and try a sampling of meze options like zesty dolmas and sweet peppers stuffed with goat cheese. For those dying for something utterly Torontonian, don’t miss the Bourdain-approved peameal bacon sandwich, prepared with your choice of toppings for under $6. 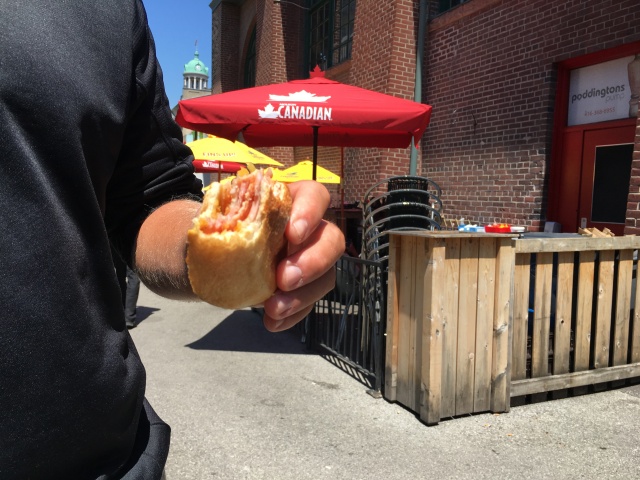 Downstairs, you can sip on freshly prepared juices (I opted for the apple + beet + carrot concoction), or splurge on your choice of crepe, savory or sweet. The market does an astoundingly impressive job of representing a range of cuisines and cultures: a Ukranian restaurant serves up pierogies and cabbage rolls, while Chinese food is doled out nearby, and vegan food is thoughtfully prepped for herbivores.

Planning on picnic at the nearby Toronto Islands? You can create the ultimate picnic basket with the ingredients from St. Lawrence Market. Freshly baked breads, farm fresh vegetables and fruit, an impressive array of cheeses and a selection of seafood and meats are available. Downstairs you can score some macarons for dessert with an array of flavors that challenge even the best French patisserie. There’s also locally sourced wine available, a perfect addition for a mid-day meal. 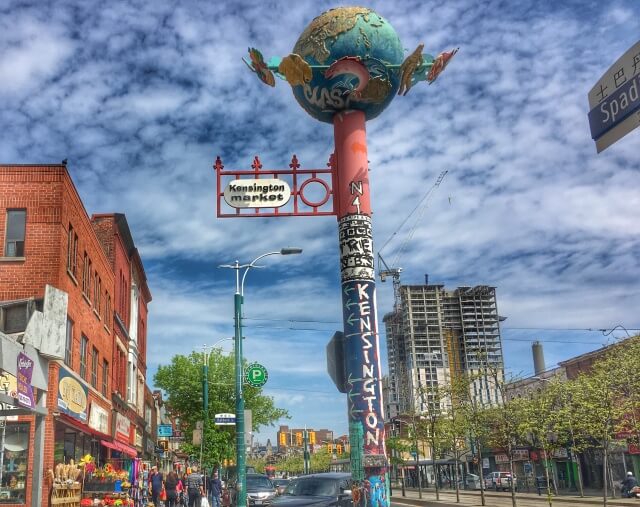 When we began our journey to Kensington Market, I wasn’t quite sure whether Kensington Market represented an actual market (something like St. Lawrence) or if it referred to an area of Toronto more broadly. As it turned out, the latter was accurate. Kensington Market isn’t a ‘market’, as such, but a vibrant bohemian quarter of Toronto that took me back to San Francisco’s Haight District. Abutting Chinatown, Kensington Market is an area where you’re likely to find a Tibetan restaurant sitting next to a medical marijuana dispensary and rastafarian-inspired wall art. Even if you don’t stop in for lunch or shopping, a walk through the area offers a sights and smells to tantalize the senses. 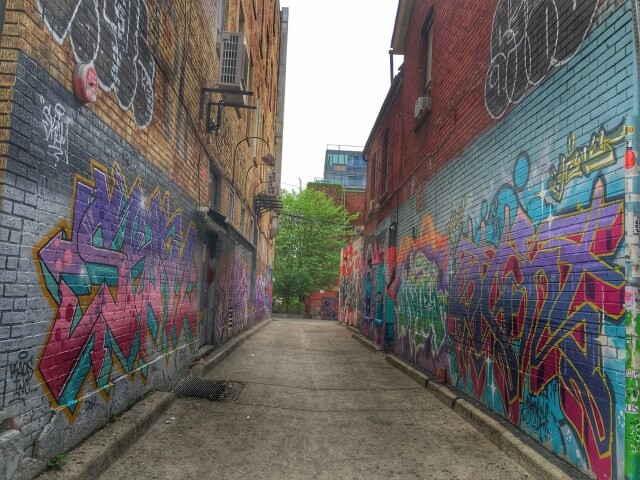 Queen Street West was referenced as cool area to peruse, often spoken as a single word (e.g. QueenStreetWest) by most that talked about Toronto’s famous thoroughfare. Queen Street runs east/west and while I’m not sure what the technical boundaries of the area are, as a visitor the street seemed most vibrant and enticing from Spadina Avenue to around Yonge Street (the fun probably extends further west than Spadina, but we stopped around there since we were exploring Chinatown and Kensington Market). The street is lined with great familiar shops like Aldo, H&M, Urban Outfitters, and American Apparel, but also includes quirky boutiques and a range of cool restaurants. 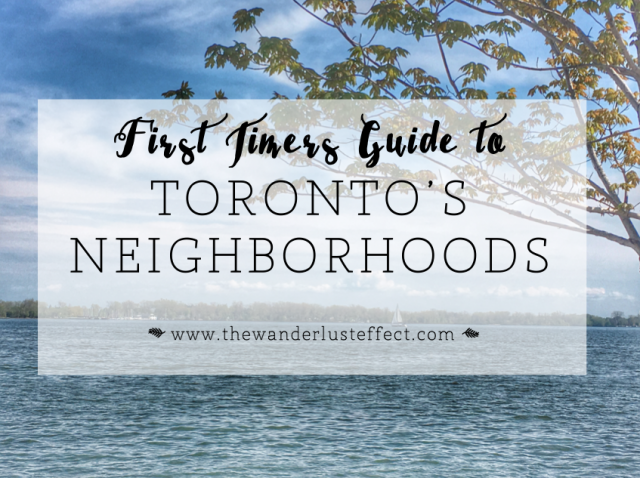 Toronto’s position on Lake Ontario provides a lovely waterfront scene for anyone wanting a tranquil escape within the city’s borders. During our sunny weekend in the city, we saw sailboats buzzing around the lake, and watched people head to the Toronto Islands, a quick ferry ride away. We sipped on Bloody Caesars outside and dined on dim sum overlooking the waterfront. The Harbourfront Center offers different arts programs and events throughout the year as well, including activities for children and families. There’s a great pedestrianized path to make soaking up the scenery on foot a breeze. 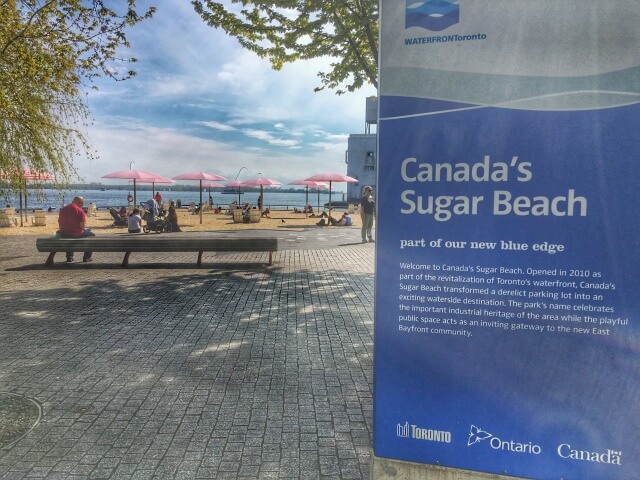 Our first brush with Toronto’s Old Town was a quick reminder that North America really isn’t all that old after all. Walking from the Distillery District to the Financial District along The Esplanade, there are plenty of green spaces that teem with children and pets on sunny days. The walk is pleasant and the signage serves to remind locals and tourists of Toronto’s history dating back to the mid-18th century. Let me put it this way: you’ll only really know you’ve entered the ‘Old Town’ because the signs tell you. As a first time visitor, there’s no real palpable transformation that happens to transport you to the Toronto of yesteryear. Pass through the Old Town – you will naturally walk that direction – but don’t think of it as an attraction.

We dined twice in Little Italy, once at Bar Raval and once at Bar Isabel, both of which left us wowed. The nighttime scene in Little Italy and the Entertainment District were vibrant and engaging, and provided a wealth of options for first time visitors to Toronto. The area isn’t really within walking distance of the Financial District on a night out (technically you can walk it, but it’s a fair distance), so plan to cab there and back. A cab will cost you between CAD $12 and $15 each way.

For those who live in Toronto or who have visited before, which other areas are musts? Any neighborhood highlights in Toronto for first time visitors?

Sightseeing in Salzburg with the Salzburg Card