As of late, I have been focusing a bit on foreign aid and its effectiveness. After reading Dambisa Moyo’s book, Dead Aid, I became extremely interested in the topic of aid, looking at whether aid helps recipient societies or actually hurts them through engendering aid dependency, corruption, etc. Easterly and Moyo both make poignant arguments about the lack of aid effectiveness, including the fact that (extremely) large sums of money (think $2.3T in the last half century or so) have been funneled into foreign aid with no real growth to show for it. Moreover, there are a number of aid recipients that are worse off now than they were before. Surely, aid has a direct effect on bettering the living standards of a certain number of individuals here and now, but in terms of long-term poverty alleviation/eradication (eradication’s probably an entirely too ambitious term), is aid really where it’s at? Sachs, who penned, ‘The End of Poverty,’ is the former director of the UN Millennium Development Goals and is super pro-aid; he sees aid as a large and beneficial factor in development and has continually pushed for a large boost in aid. I’ve continued to look into all of their arguments (plus arguments of Paul Collier) to figure out where I stand on the matter… as for now, I tend to lean towards the side of Easterly & Moyo. 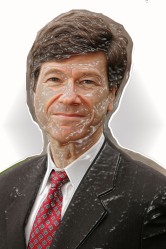 I found this fantastic write-up done in 2007 that puts Sachs up against Easterly in a discussion about foreign aid and it’s effectiveness in the development arena. Check it out. Perhaps it’s just the idea of these two brilliant (and somewhat dichotomous) men having it out that makes me love academia. Even more, it makes me love that we live in a world where people can voice their opinions on these types of matters freely.

For anyone else out there that finds this debate interesting, here are a few fun links to help you stay connected.

Our First Delivery with Pack for a Purpose

‘My Life as a Refugee’ — Would You Play?