The Caves of Taulabé are well-known within the part of Honduras that they call home, and are one of two sets of cave systems in the entire country that allow tourists to explore. When we originally headed to D&D Brewery, we had a few items on the docket with D&D Adventures: Pulhapanzak for a day, followed by boating on the lake. Anything else was TBD, and we were hesitant to cram too many things into a couple of days lest we feel rushed.

When we looked at D&D’s wall of adventures, we were all immediately taken by the idea of spelunking. Taulabé is roughly forty minutes from the lake but we knew we could get it in for a late morning/early afternoon experience and still make it back to Tela at a reasonable hour. After getting the go-ahead from all parties (we’re very democratic that way), we scheduled our transfer from D&D Brewery to Taulabé (700 lps for four of us, around $33) immediately following our morning on the lake. 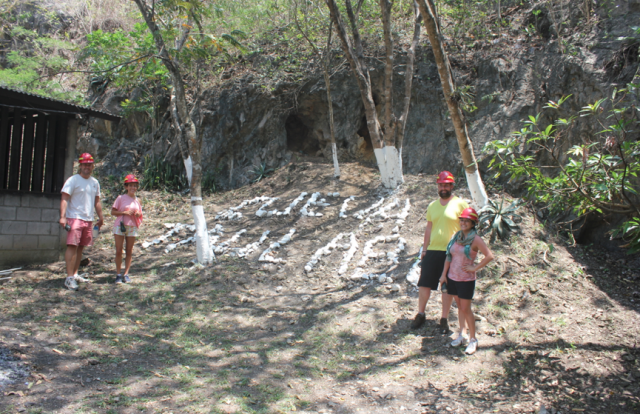 The drive was quick and painless. We pulled into a long driveway with a green ramshackle building at the end of the stretch. A group of locals were congregated, sitting in hammocks and whiling away the morning. A sign nearby reassured us that we were in fact at the caves. Entry fees to the caves varied, and we had to decide before going in whether we wanted to do the normal spelunking trip, which would take around 40 minutes, or the ‘extreme’ caving, which would clock in at around 2 hours. While the normal spelunking adventure cost around 80 lps each (around $4), the extreme variety adds on a premium, bringing the total up to 230 lps (about $11). Clearly both options were affordable, and our biggest concern at the time was the ‘extreme’ designation.

How extreme is extreme? We posited the question to the congregation, the four of us totally wide-eyed and eager. As with other places in Honduras, no one spoke English. I generally like these situations because it allows me – forces me – to speak Spanish and practice. But this situation was a bit different. We would be entering a deep cave, being led by one sole Honduran man who would be narrating our adventures in a foreign language. From what we could gather, ‘extreme’ was twice as long, distance-wise, and far more rugged.

Naturally, we opted for the extreme. How could we not? So, geared up with a helmet and one small handheld flashlight each, we entered the cave. Our guide was kind enough to speak a bit slower than normal and we had no problems. I was impressed with myself actually (and with the others) – we left knowing exactly what we saw, and understanding his lecture without him speaking a word of English. Survival skills. 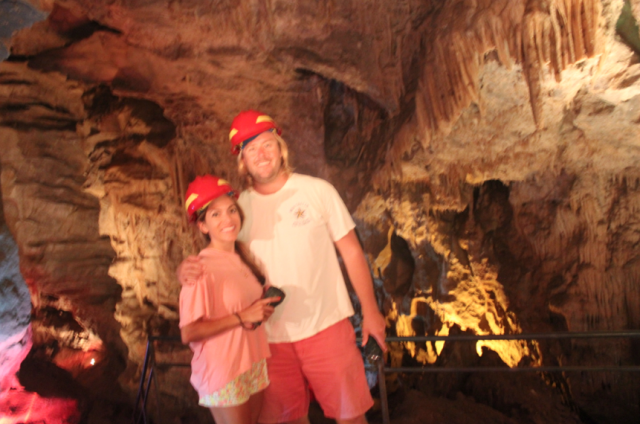 The cave system is fascinating. It was discovered in the late 60s, and scientists are still uncertain as to where the cave ends. Some theorize that it goes to Lake Yojoa, some say it may go to Copan Ruins, but to date it remains uncertain. The first 300 meters are part of the normal tour, and guests explore the cave on a pretty well marked path with railings. There’s enough light to help guide your way and shed light on the amazing stalagtites and stalagmites that line the cave system. Our guide, Luis, shared that the stalagtites ‘grow’ about 1″ per 100 years, which is pretty remarkable considering the size of these.

The four of us followed Luis deeper into the caves, spotting bat droppings, and cockroaches running amok. This was cockroach heaven. At home I have a momentary freak out if I see a rogue roach. Here, it was practically a cockroach mating ground, which would become even more interesting as the caves got darker. 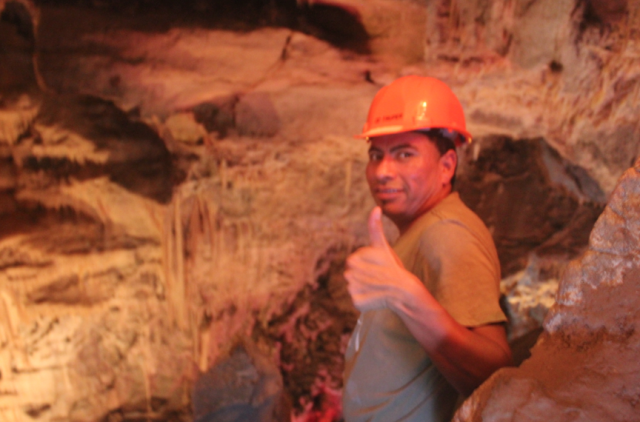 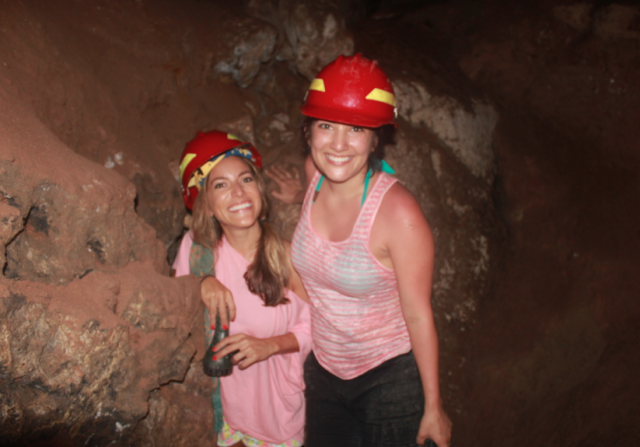 This is me, realizing that there are a lot of cockroaches: 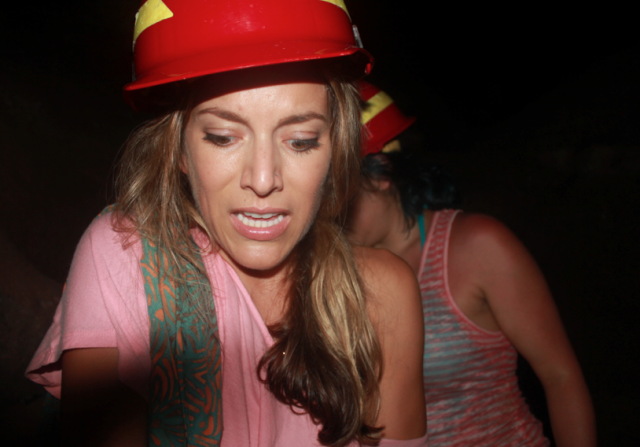 About 10 minutes into our walk, we had our first brush with the ‘extreme’ tour, a small cavity that led up to a viewing platform that would allow us to see a long stretch of the cave system from above. The cavity was this narrow, muddy passage that had us pulling ourselves up to get through. Once we made it to the top, the stretch narrowed (I didn’t think the boys would make it), until we reached the view point. Luis encouraged us to step out to take it all in but we kept a reasonable distance from the edge. No guardrails and no safety nets combined with slick muddy passageways didn’t seem like the safest setup. 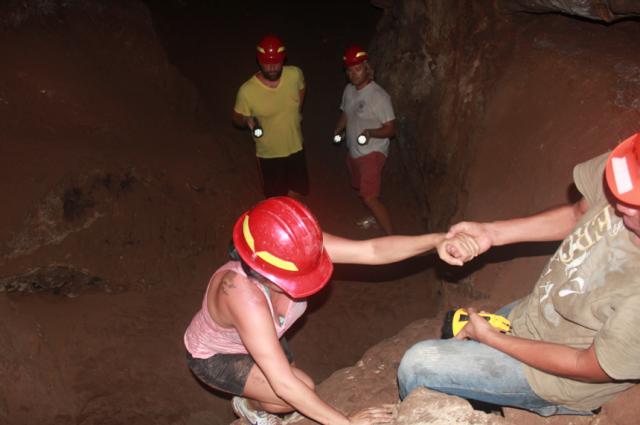 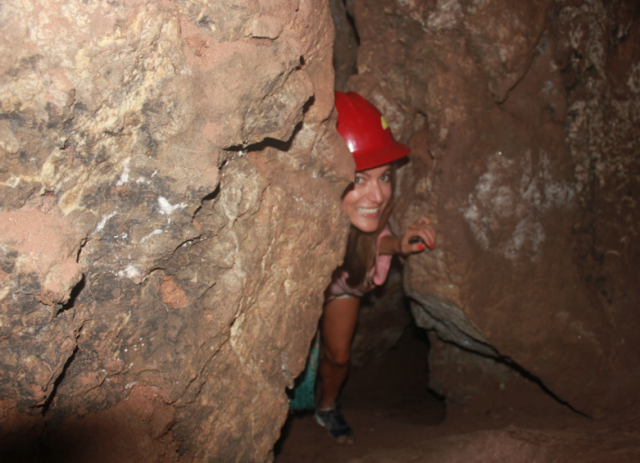 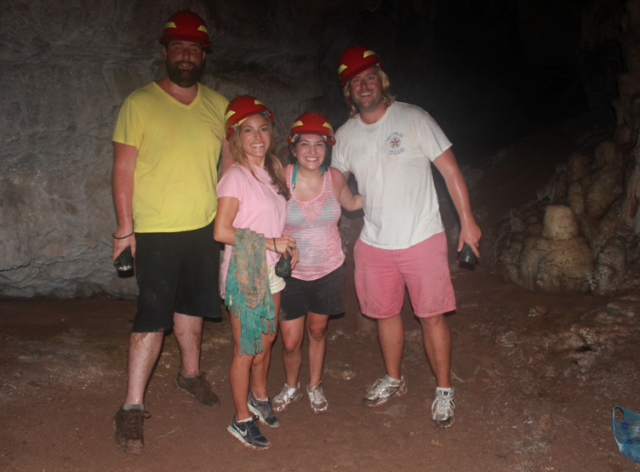 We wound around the inside of the cave, in awe of not only the space, but also of the fact that we were the only ones in the cave. I couldn’t tell if this made me excited or nervous. After another half hour or so, we reached ‘the end’ of the 300 meter normal tour. We were about to take in the next 300 meters and for that, we’d go off the path to embark on the next adventure.

I’ll tell you now in case you’re wondering: the extreme spelunking is very extreme. Part of that is credited to the fact that there are no lights, no paths and no guardrails anywhere in the next 300 meter segment. The only light we had was dim light from our individual flashlights. Headlamps would have probably been more practical, but flashlights worked. The path was consistently more muddy and slick and noticeably damp. It was as if we’d entered a totally different world. We glimpsed cockroaches and bats alive and well in the cave, but couldn’t see them in full because of the lack of light. We held each others’ hands as we climbed up steep rocks, skidded across the sweaty surfaces, and climbed through narrow openings. Some of the downhill passages were so slick and difficult to maneuver that it was easier to sit and slide to get around. It was an adventure to say the least.

We finally reached a point near the end that had us walking through a narrow passage between two gorges (I’m not sure what else to call them). There were no guardrails and we weren’t suspended from anything. To the right, the land ceased to exist and the floor opened up to the world below. I didn’t want to look down to see how far it was, but suffice it to say that the drop is likely fatal if you were to slip. At this point, my sister turned to us and told us that the road ended there for her; she wasn’t going any further. The guide asked us if the other three would like to continue, the end was very near. We looked around – we were definitely in a place that would have our parents holding their breaths for us – and all silently agreed that we were on the same page. We’d had our fill of adventure, and while I highly doubt anyone has actually died on this tour (I can’t confirm that), I didn’t want to test it. Sweaty, mud-covered, a little dinged up, and totally on a high from everything we experienced, we made our way out. The temperature dropped by 15 – 20 degrees when we hit the normal path and our bodies were so grateful for the cool air. We escaped the caves more or less unscathed, and very happy about the experience.

For anyone going, make sure that you bring water as it gets very hot (you can buy some at a tiny shop outside of the cave). Tennis shoes are an absolute must, though shorts and a t-shirt seemed to be fine for clothing. You will be very dirty and very sweaty after this tour, and there’s a small washroom where you can clean up a bit afterwards. I took my camera inside but I’m not sure I would recommend it. Having both hands is helpful most of the time and while you’re climbing the camera can get dinged up a bit. If you’re bringing one, I would advise putting it in a proper camera bag/carrying case to keep it protected. We have GoPro footage but it was so dark in the extreme section that it couldn’t pick up any footage, unfortunately. Even the 300 meter standard tour is great, but if you’re up for it, the ‘EXTREMA’ version is definitely a memorable experiences. Know your limits, know that the guide will not be able to speak English, and enjoy!

Kenya: A Day in Nairobi