Highlights from the Palace of the Grand Master + Rhodes’ Archaeological Museum

Remember how I said you’re pretty much guaranteed sun when you visit Rhodes? Ironically, the morning of our tour of Old Town Rhodes with Tourtlee we dealt with a mini downpour that followed us for the morning. It subsided by mid-day for a sun-laden afternoon of exploring but the morning involved dodging raindrops throughout our tour (made more ironic in our discussions of how sun-drenched the island is typically).

I mentioned in my previous post about Rhodes Old Town that we spent our first day together simply meandering. When time permits, I think there’s an untold beauty in wandering without tangible objectives; just taking in the city streets, and the sights and smells of a new town. That being said, we knew there was too much history to explore without a tour guide, and so much that would go unknown if we didn’t have someone to educate us a bit during our time on the island. We reached out to local operator, Tourtlee, to explore the Old Town of Rhodes with a resident guide on a small group tour (the six of us plus one other visitor). First stop: Mandraki Harbour, where the Colossus of Rhodes once stood according to lore. 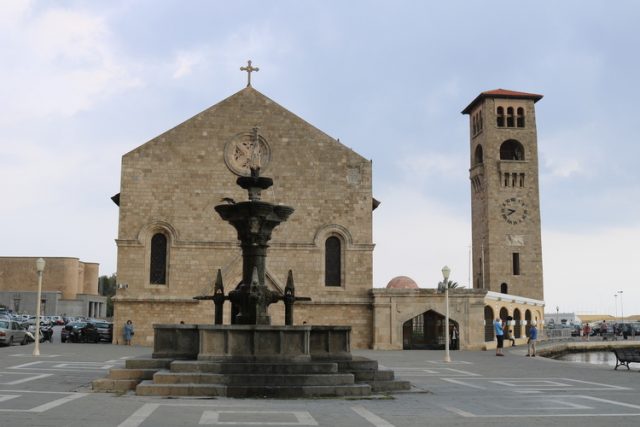 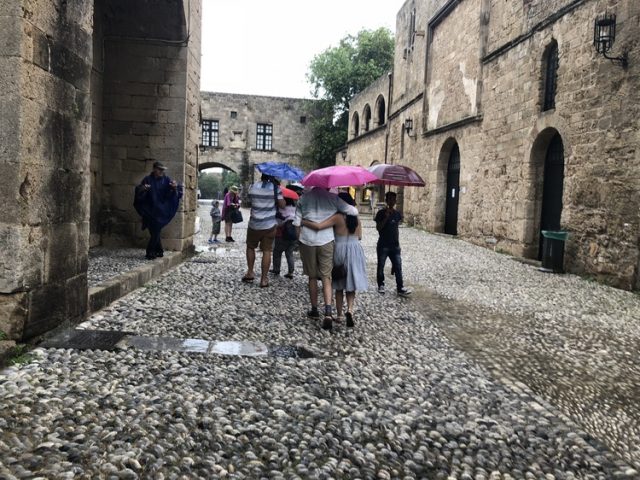 Generally speaking, I like to have a bit of a primer on a location before visiting but Greece can be tough if you’re trying to get specific. Between the birth of democracy, the foundations of currency, the emergence of the arts, the basis of modern medicine, and the layered mythology that has its roots here, there’s a lot to understand to really grasp the depth of the country’s evolution and the importance of Greece in the global landscape. Add to that the fact that we discuss Greece as a single nation, but in reality Greece is spread across a vast swath of land and sea where cultural influences and histories vary depending on the location. Rhodes in particular has an interesting locale in the southeastern Aegean just off the coast of Turkey. About an hour’s ferry ride to cross from Rhodes to the Turkish port town of Marmaris, it’s no wonder that the Dodecanese islands bear an Ottoman influence.

Rhodes became part of a larger empire during the time of Alexander the Great and then continued to grow into a commercial hub, an important port town, and a center for arts and culture during its heyday. Our tour highlighted the Rhodes of antiquity plus a slightly more modern facet of Rhodes with a focus on the Knights of the Order of St. John who called the city home before relocating to Malta.

As I mentioned, our tour was happening on an uncharacteristically drizzly day so we opted to tour some of the museums with our guide to maximize our time together. Our first stop was the Archaeological Museum of Rhodes housed in the former hospital of the Knights of St. John. A visit to this museum is a must; it’s one of the island’s most important historical sights and it houses authentic pieces of Rhodian history. 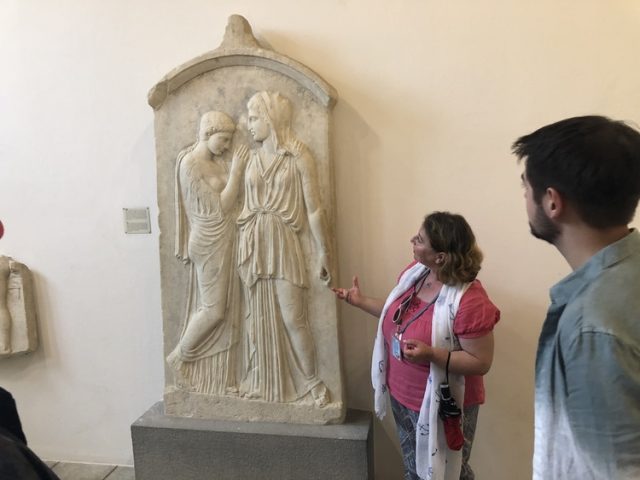 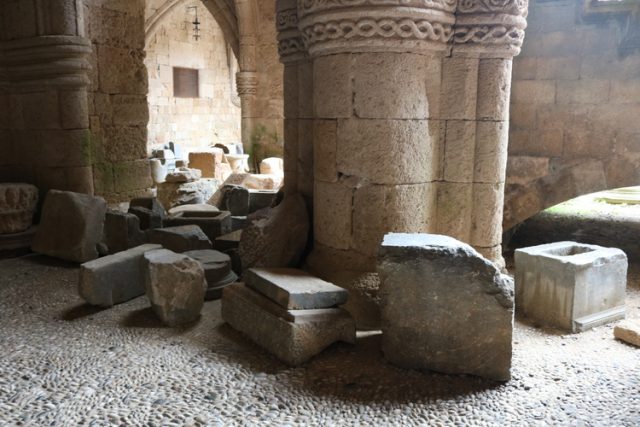 I find this to be true with many well-crafted museums: they can be a bit daunting. Where do you start? There’s always so much to absorb that part way through you end up just kind of walking, glancing, and skimming unless you’re particularly fascinated with a place. Having a guide helped us better understand what we were seeing, especially since the museum housing is historic in and of itself. We walked through what once was the hospital ward, plus another room that was presumed to be the dining hall. All of these have been converted to house artifacts found in the region, some dating back millennia.

The Palace of the Grand Master of the Knight of Rhodes is a domineering site from the outset but our guide confessed that she was more enamored with the Archaeological Museum since it housed more authentic pieces from ancient Greece. The Palace, the castle structure that dominates the Old Town scene, is actually a reconstruction of the original. 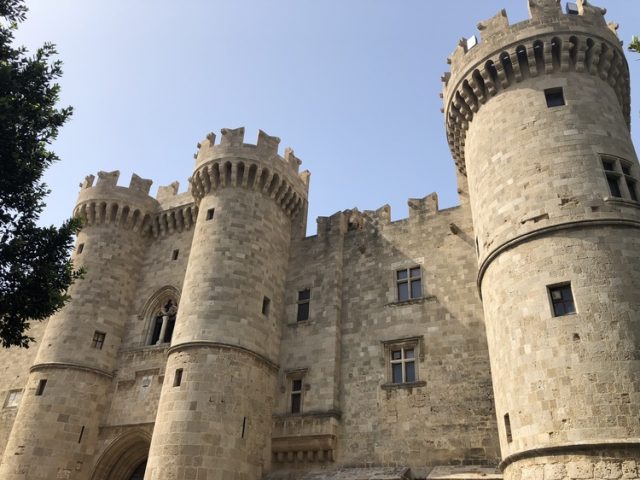 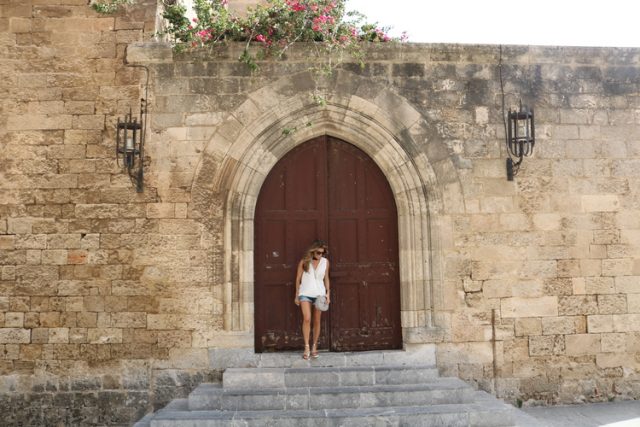 The spot where the palace sits is where historians believe that the Colossus of Rhodes actually stood once upon a time. Most of us envision the Colossus standing over Mandraki Harbour (like I mentioned above!), and to be fair we believe this because maps literally show it there and we discuss it as if that information is fact. In actuality, many historians believe that it stood near the entrance of the Palace of the Grand Master of the Knights of Rhodes. The palace was originally built in the 7th century but an explosion in the mid-1800s destroyed the majority of the original construction.

The rebuilt structure was actually built as a palace for Mussolini (you’ll see fascist symbols throughout the palace today) during the time when Rhodes was under Italian rule. The palace we know today is now a museum with a grand courtyard and impressive rooms with hand painted walls and mosaic flooring. If you’re planning on entering the Palace of the Grand Masters and the Archaeological Museum then you’re best off buying a multi-site combination pass for €10. The pass includes access to both of these sites along with the Byzantine Art Museum and a few smaller sites. 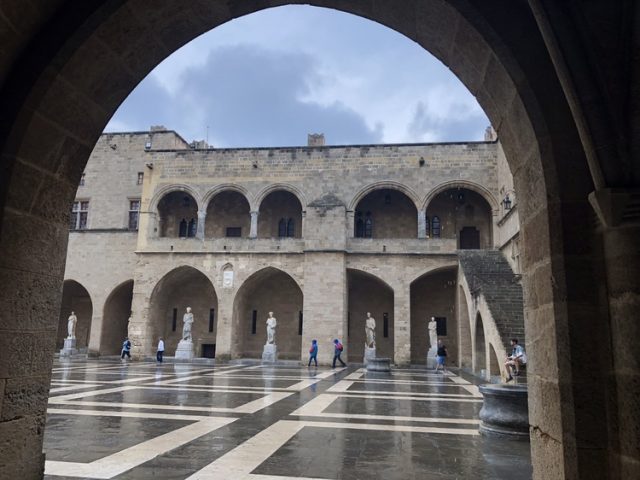 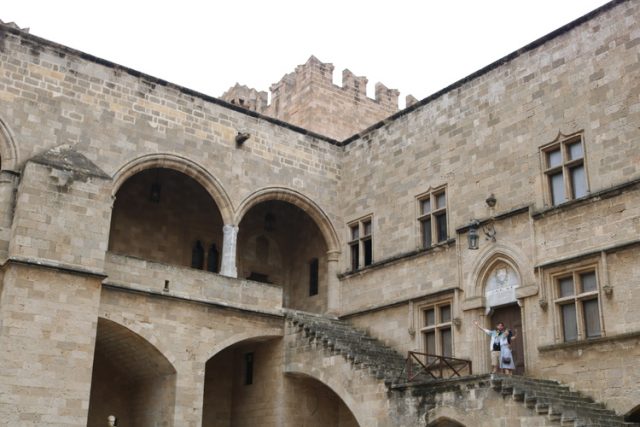 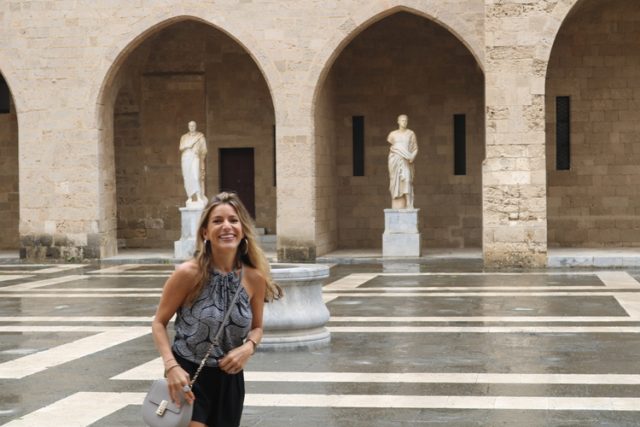 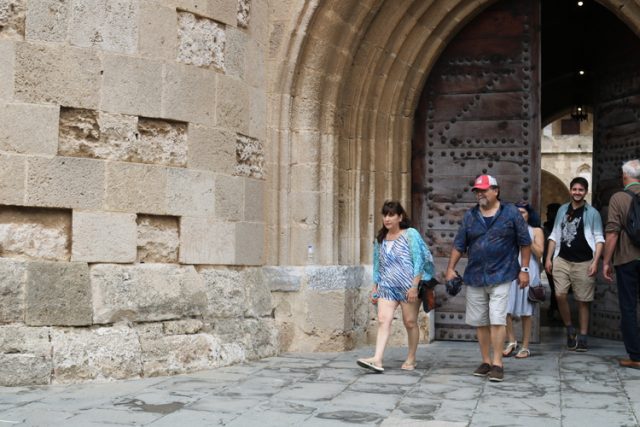 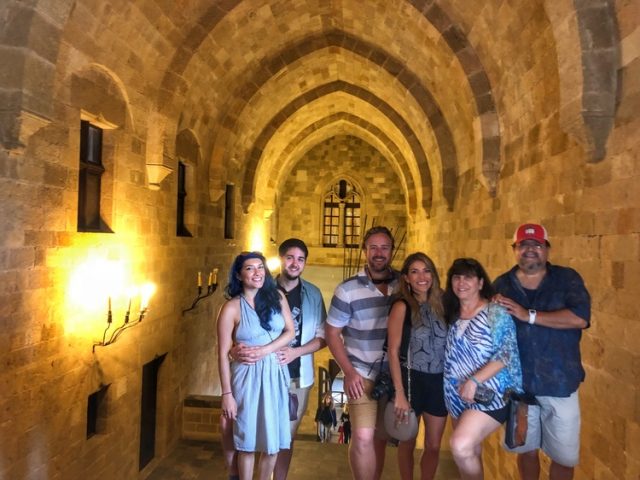 Our tour was a walking tour, which is best suited for an Old Town focus as the core of the Old Town is pedestrianized. Being based close by, we were able to easily walk to our meeting point to start our day. If you’re situated a bit further afield, Tourtlee offers transfers to get you to the tour’s starting point to make things seamless! Whether you opt for a guided tour or a self-guided version, these two sites are absolute musts if you’re visiting Rhodes as they house incredible mementos of the island’s history. Have you been to Rhodes? Leave your suggestions and highlights for the island below!

Do you prefer a self-guided tour or having a tour guide in places like this?

Uganda: Insights from a Tour Guide