Stellenbosch may be South Africa’s most famous wine region, but neighboring Franschhoek knocks it out of the park with charm. During our three days in the Cape Winelands we based ourselves in Franschhoek, a town with centuries-old architecture, a serious dining scene that is often celebrated as the culinary capital of South Africa. After a day of wine tasting in Stellenbosch, we were excited to compare and contrast the vistas, wines, and experiences between the neighboring areas. The best way for us to do that? The Franschhoek Wine Tram, which departs from the main street in Franschhoek and offers four routes to experience different wineries in the area. You can opt for a 10AM or 11AM departure, and we hopped aboard the Blue Line for the first outing.

Any given route includes 8 potential stops to choose from. If you’re out for the entire day, you can visit a maximum of 6 of the 8 based on timing (you’ll get a max of 5 if you leave on the second departure). Each stop includes an hour at the winery to enjoy tastings, pairings or lunch, which we found to be the perfect amount of time in most instances. Read on to check out where we stopped on the Franschhoek Wine Tram, plus scroll to the bottom to see the video of our day! 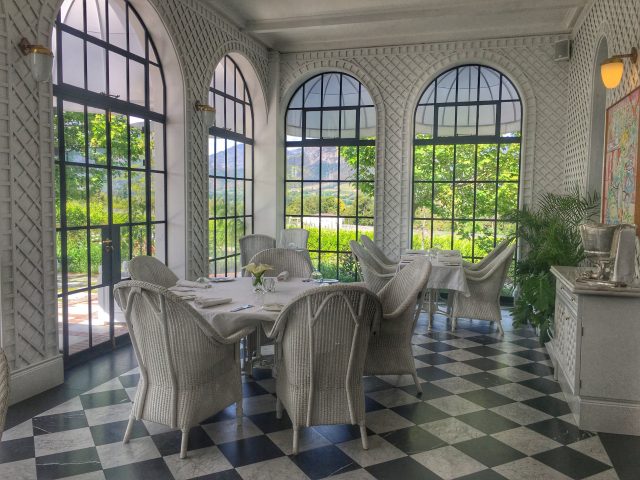 If you’re on the Blue Line on the Franschhoek Wine Tram, Le Lude will be your first stop. Whether they purposefully orchestrated having a stop for bubbly as the first estate on the route or not, it works pretty perfectly. Le Lude focuses exclusively on Cap Classique, South Africa’s equivalent of champagne. The wine maker at Le Lude worked in France for a number of years to hone his skills with sparkling and he brings them to the estate with brut and rosé offerings. (You’ll see the abbreviation MCC used throughout the Cape Winelands. This refers to Méthode Cap Classique and indicates sparkling wine from the region.)

If you’re pacing yourself like we were, you may opt for their more basic MCC tasting: their Brut Non-Vintage and Rosé Non Vintage for R50 per person. If you’re a real sparkling lover (neither Scott or I are huge on sparkling), try their tasting of Brut Non-Vintage, Rosé Non-Vintage plus a French champagne so you can compare the tastes and styles for yourself (R120). There are also tasting options that include food for those that prefer pairing options.

Also on site is their restaurant, Orangerie, which looks gorgeous and elegant to match Le Lude’s overall vibe. If you’re not in the mood for lunch, their macaron and pastry selection is next level. Don’t look too closely if you don’t want to indulge! 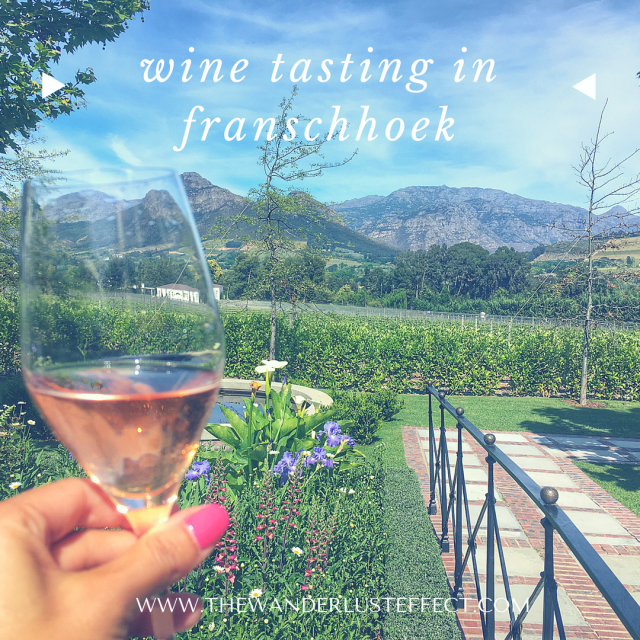 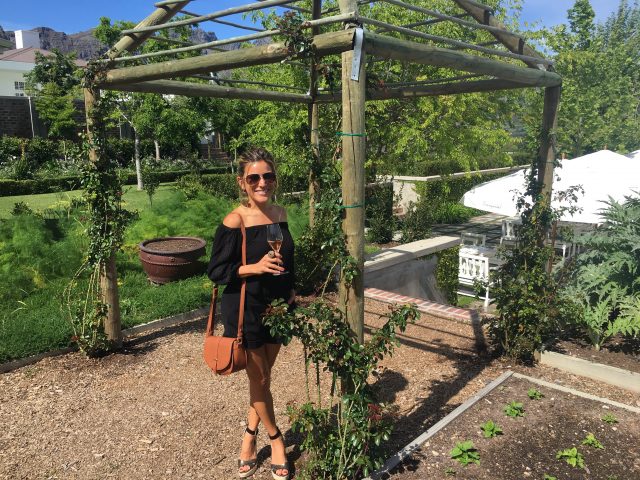 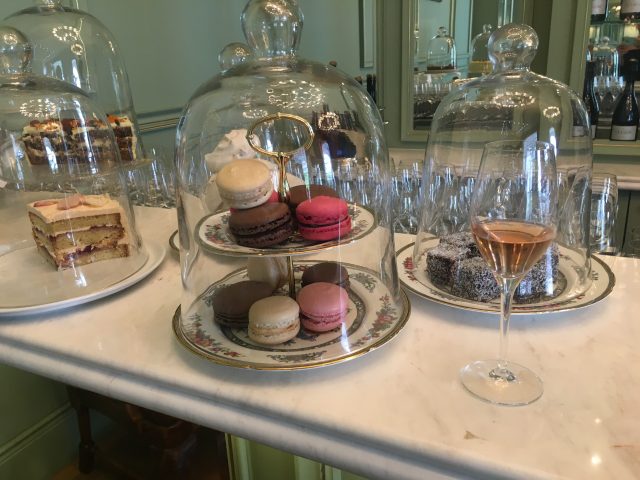 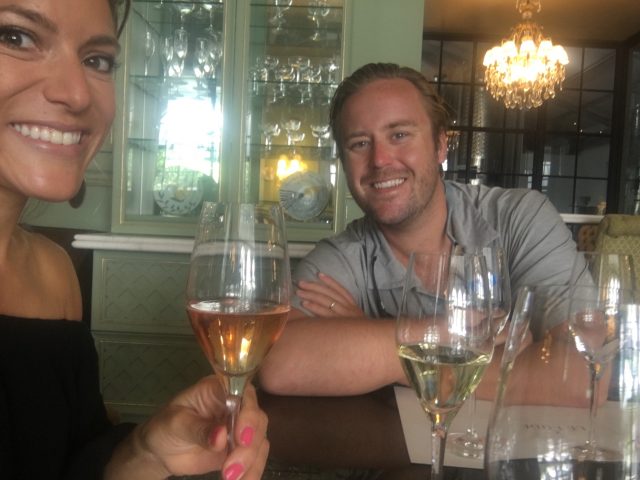 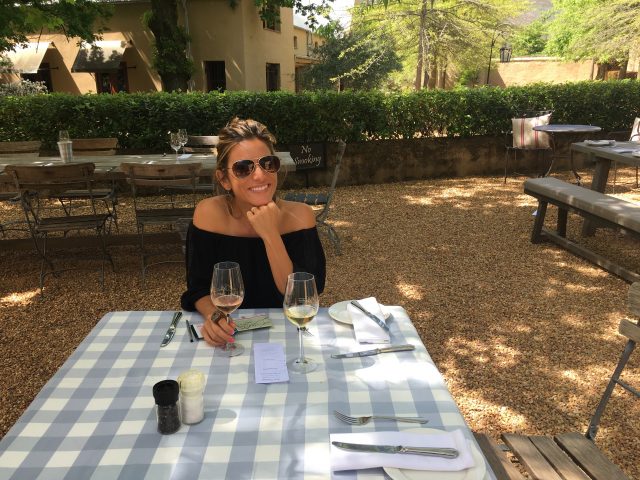 For all of the glitz and glam that Le Lude exuded with its posh setting and Cap Classique tastings, Le Petite Dauphine provided a beautiful contrast: a more rustic farm feel, with picnic tables and umbrellas and views of the mountains. Cafe Bon Bon on site received acclaim from many people we spoke with and a number of South Africans recommended we dine their for breakfast or lunch if time permitted (sadly it didn’t).

The tasting approach at Le Petite Dauphine allows visitors to choose their own tastings and pay for each individually. We opted to share a tasting of four of their wines on offer: a chardonnay, a rosé, the ‘Gentle Giant’ (their blend), and the Merlot. Tastings range from R15 to R35 per glass. The setting was laid back and relaxing, and the wines were generally good. We ended up taking home a bottle of their Gentle Giant, which was my favorite of theirs and one of my favorite blends in the region. South Africa is an incredible value for travelers from the US, UK and parts of Europe. We didn’t initially know the cost of the wine when we asked to purchase a bottle but when the bill came out, we ended up paying R90 for a bottle of the Gentle Giant, which is equivalent to about $6.50. 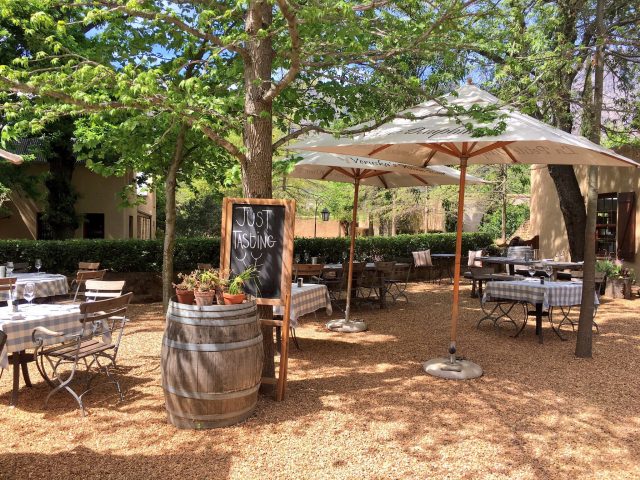 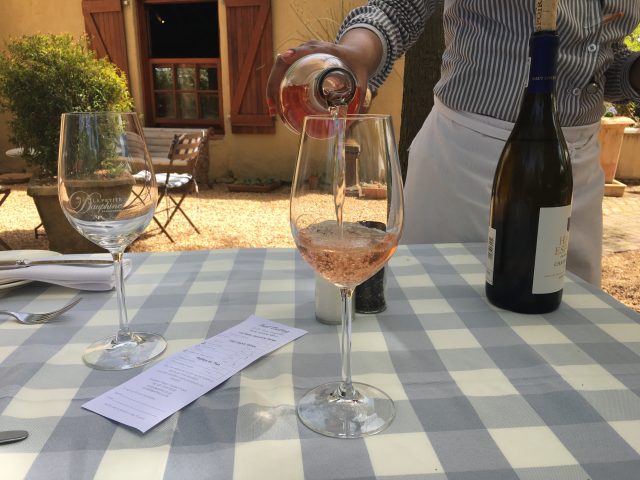 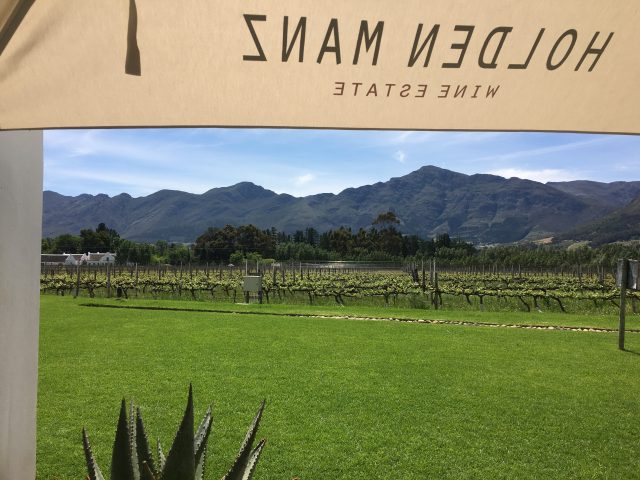 To be frank, I hadn’t heard of Holden Manz and I was debating scratching it from our tasting tour on the Franschhoek Wine Tram. The tour guide mentioned that Holden Manz does great reds so we decided to give it a whirl to see what they had on offer. Plus, when you show your tickets for the Wine Tram, visitors get 50% off tastings and 20% off of bottles so we couldn’t go wrong.

If you talk to Scott, he will tell you adamantly that Holden Manz had the best wines in all of Franschhoek, and possibly out of all the wine tastings we did in the Cape Winelands in general. I personally loved their Cabernet, which was a bit sweeter and more well-rounded than other Cabs I’ve tasted. Scott loved their Reserve Syrah, and we heard others talking about how it’s one of the best reds coming out of the Franschhoek Valley in general. Syrah’s aren’t my thing so I can’t really comment on this, but suffice it to say that despite being the most expensive bottle on the list (this is relative; it was about $40), we ended up taking one home since it was Scott’s highlight from the day! 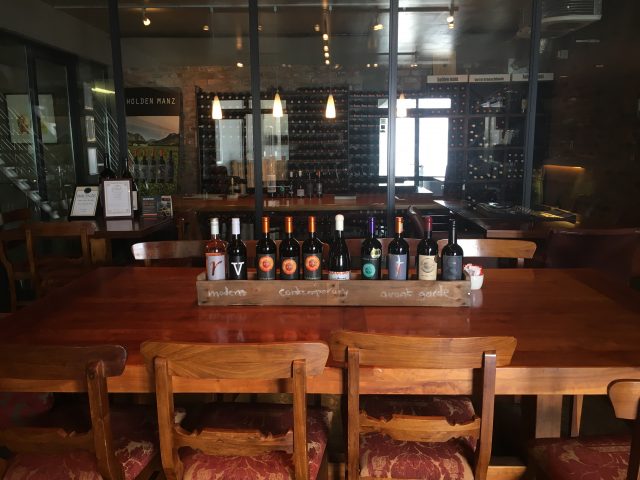 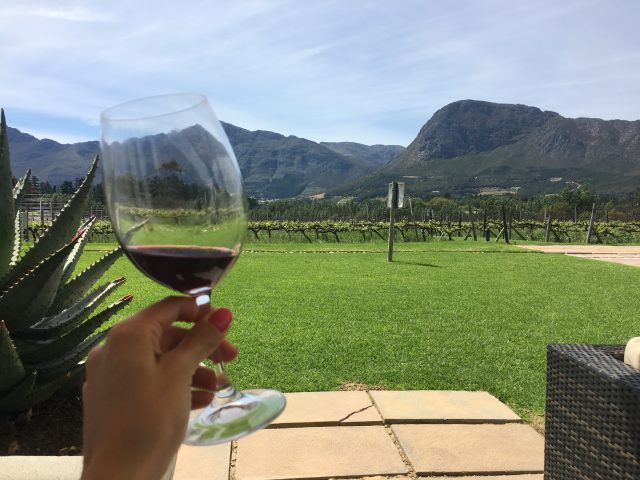 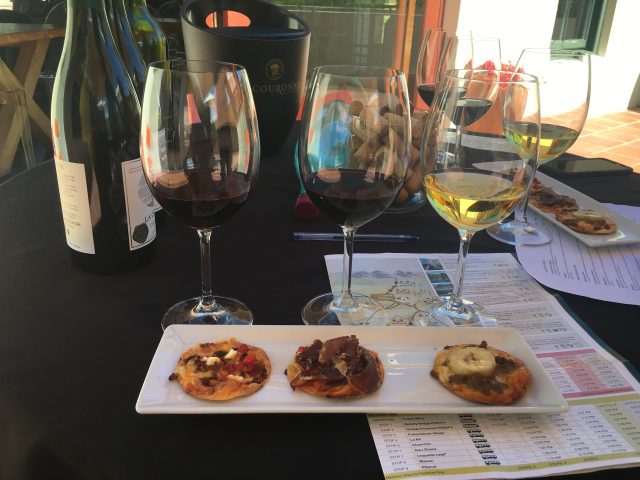 Can I be honest?

I’m going to be honest.

You can skip La Couronne and you won’t be missing out on much. They do a wine + chocolate pairing which was what initially roped me in (I mean, can you blame me?!) but we ended up opting for the wine + pizza pairing. Not any fault of theirs but I could only have one of the pizzas since two out of three weren’t veg-friendly, so that bit didn’t have the chance to wow me like it may have impressed others. I really do think that their pairing options sound enticing, but their wines were some of my least favorite of the day (just no standouts in the bunch) and the setting left a bit to be desired. We stayed for lunch – we did a mini cheese plate and a large Greek salad to share – and while the food was good, I would have done it differently if we were to go back. I’d probably opt for La Borgogne in lieu of La Couronne after hearing feedback from those that went to La Borgogne, and would instead grab a bite at Mont Rochelle where nibbles are available for R35 a pop. 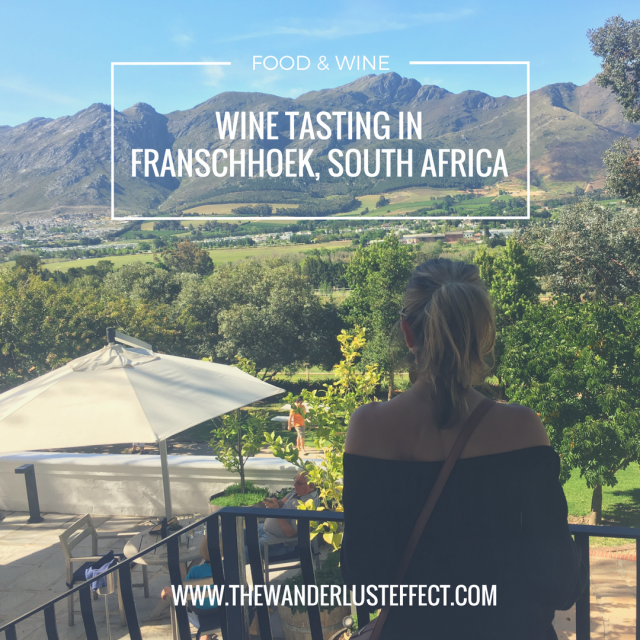 Mont Rochelle, Richard Branson’s Franschhoek estate, is famed for its stunning views and they don’t disappoint. Going in, I had imagined the estate to be similar to Delaire Graff in Stellenbosch, glitzy in a Napa chateau-type way, with a large-scale feel and a luxe vibe. In reality, the estate feels far more rustic than I imagined: wine cork art inside, and a bistro-feeling tasting space that opted for woods and organic materials over glittering metals. The restaurant on site, The Country Kitchen, serves up small bites for wine tasters needing some fuel. There’s nothing online that we found that alluded to this. If you peruse their restaurant menu, it seems like a proper sit-down, three-course meal on offer but in reality there are other options for those wanting to pick at things. We saw sandwiches, cheese plates, and small plates of salads and veggies come out to tables while we were sitting there. Had we known, we would have opted to eat at Mont Rochelle instead, with gorgeous views to keep you wowed while you dine.

At Mont Rochelle, you can do a white flight or a red flight, but if you ask nicely, they’ll gladly give you a flight that includes both red and white (Scott went this route). A tasting includes 3 wines for R25 (about $2). 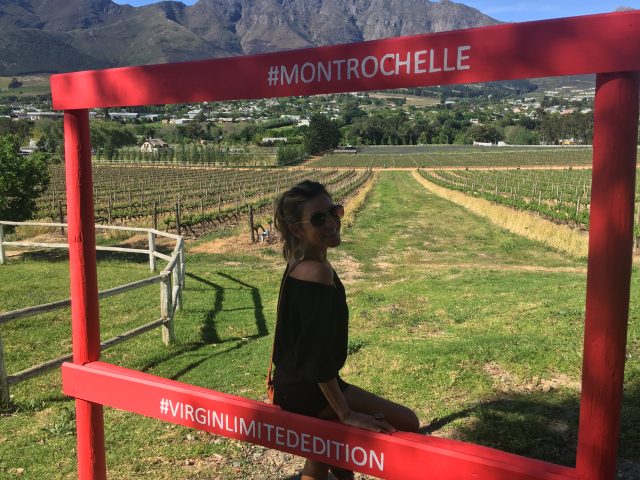 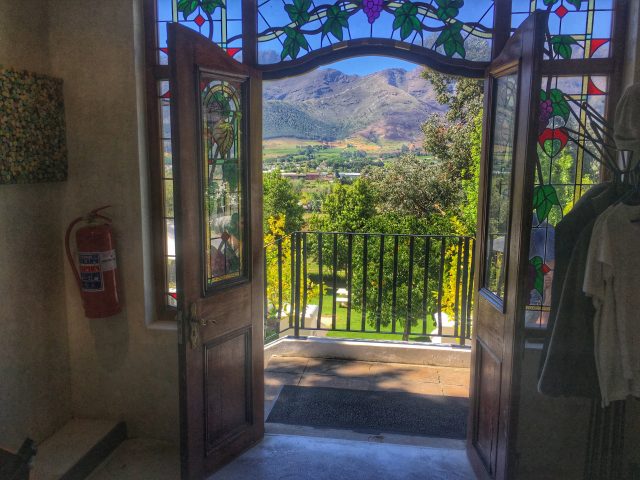 Check out the video from our day on the Franschhoek Wine Tram:

Have you done the Franschhoek Wine Tram or been wine tasting in Franschhoek? What wineries were standouts for you?