One week island hopping in the BVI

You’ve already read about our two days on Jost van Dyke, our time at The Baths on Virgin Gorda, and our BVI island hopping tour through Peter, Norman, Salt and Cooper Islands, but I thought I’d give a more detailed timeline and a recap of our British Virgin Islands itinerary for those looking to do something similar.

It’s worth noting that our adventure was a bit atypical in the sense that we did four nights aboard a boat and three total nights on land. For many, this itinerary would include an entire week on a boat, though I can honestly share that I thought our breakdown of land vs. sea worked perfectly for us. Boating – even on a reasonably large and luxe vessel – brings tight quarters, and with my mom being a bit queasy as we began our trip, I think four days was the perfect amount of time to thoroughly enjoy the boating experience. Most people we talk to about boating in the BVI also mention that they charter catamarans and sail through the region. We were on board a power boat which allowed us to zip around faster, and go clockwise vs. the counter-clockwise direction many sailors go to stick with the normal wind pattern. 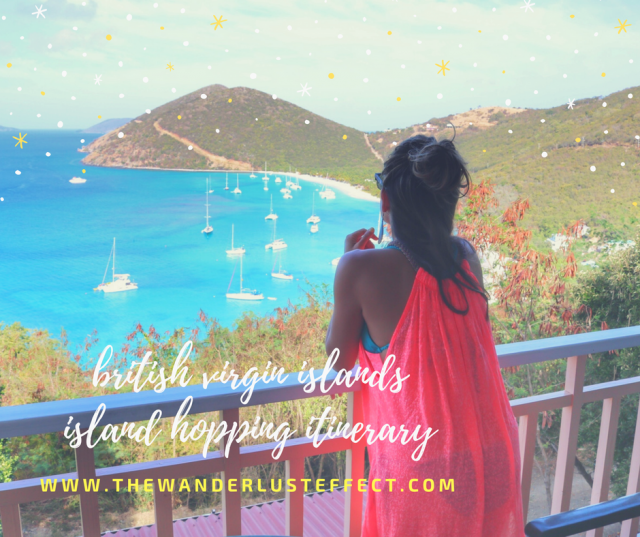 Day 1 was a transit day and an intro to Jost Van Dyke for my parents who were visiting for the first time. They had come via St. Thomas (generally a much more cost-effective route for those flying from the US), while Scott and I were able to fly directly into Beef Island, Tortola. We all met at the West End Ferry Terminal in Tortola to head to Jost Van Dyke. There are only a handful of ferries that go during the day, and after we missed the 10AM ferry, we were pushed back to the 1PM, which got us into Jost before 1:30PM, giving us the entire afternoon to settle in and explore.

We were saving the traditional Jost experience (read: beach bars + White Bay) for our second day and chose to spend our first day lunching at Foxy’s Taboo and visiting the Bubbly Pool. Evening brought dinner at Corsair’s, a bushwacker at Foxy’s, and an overnight at White Bay Villas. 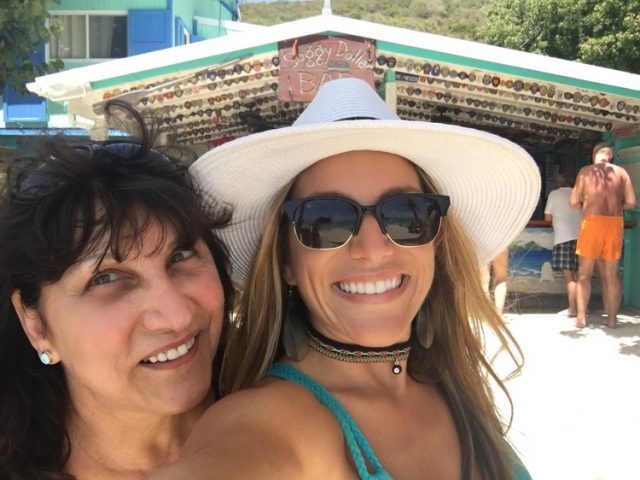 Day 2 brought our second day on Jost, a full day to explore and take in the White Bay scene. Going in, I wasn’t totally sure about spending two nights on Jost but in hindsight it was the perfect way to kick-start our trip, bringing the perfect balance of peaceful nights and beach bar-focused days. We spent the entire second day on Jost based at Hendo’s Hideout, popping down the beach throughout the day to great a requisite painkiller from Soggy Dollar, and scoping out the scene further afield. We had dinner at Corsair’s (yes, again!), followed by a post-dinner cocktail at Foxy’s, and then overnight at White Bay Villas. 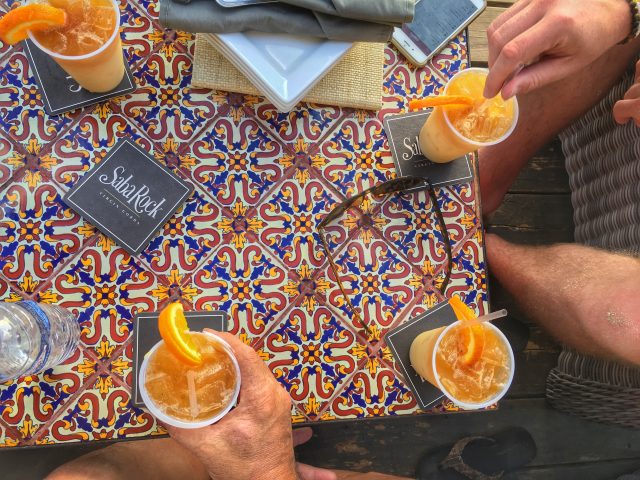 Day three in the Virgin Islands marked the first day of our yacht charter with Virgin Motor Yachts. Our captain collected us from Great Harbour around 1PM and we immediately began our journey to Virgin Gorda, where we planned on spending the first night in the North Sound, with a mooring at Saba Rock Resort. We arrived in time for happy hour, then continued our tour with a stop at Bitter End Yacht Club, a bit of sunset time aboard the yacht, and then a late dinner at Saba Rock. 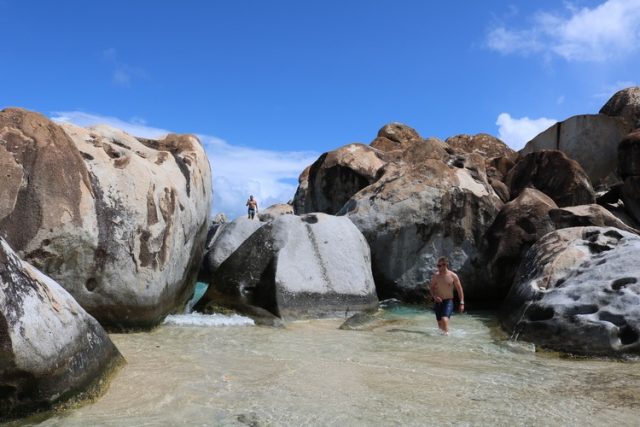 We headed out early on day four to begin our morning at The Baths on Virgin Gorda, one of our trip highlights. We arrived at around 9AM, but if you can get there earlier, do it to avoid the crowds that trickle in early. We had the morning through early afternoon at The Baths before making our way away from Virgin Gorda and heading towards the smaller islands that dot the south side of Tortola.

We had originally expected to spend the night at Cooper Island, the logical next island in the chain, but all of the moorings were already taken by early afternoon. With the help of our captain, we switched up our itinerary on the fly, instead heading to Norman Island where we had the afternoon and night settled into one of the largest mooring fields in the BVI. We floated, we snorkeled at the Caves in the latter part of the afternoon, we grabbed a drink at Willy T’s, and had dinner at Pirate’s Bight for a memorable evening on land. 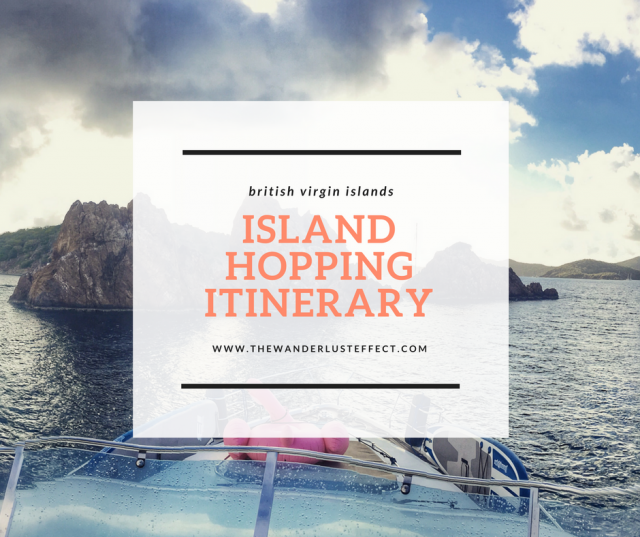 Day 5 (the third day of our yacht charter), was a memorable and packed one. We moved our boat from Norman Island to the Indians in the early hours of the day, sometime shortly after 6AM. Stepping out to this rock formation was a jaw-dropping wake-up call for everyone on board. We spent just a couple of hours moored here before taking off and making our way east down the island chain headed for Peter Island. 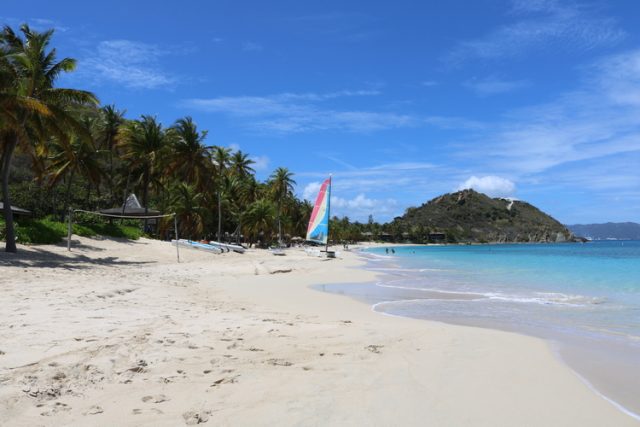 After a morning at The Indians, we spent the better part of the day at Peter Island, moored in two different locations: one on the backside of Peter, where the snorkeling is out-of-this world; and a second stop at Deadman’s Bay, the home of Peter Island Resort. We snorkeled at our first stop, paddled at both, and took in the gorgeous beach scene during our second stop. Full from breakfast on board, we opted not to eat on land but for those that want to dine ashore, their restaurants look great! We pulled away from Peter Island in the late afternoon and headed for Salt Island where we’d spend the remainder of the day. 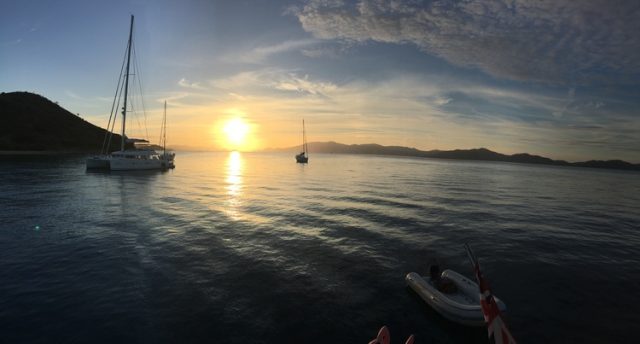 We spent the afternoon and evening on Salt Island, where there’s absolutely nothing on shore for tourists in terms of dining or accommodations; it was perfect for what we needed that night. We toured the island by dinghy shortly after we arrived and then spent the evening on board, where the seas were super calm. We ate on board, took in the sunset, at watched the tarpon zip in around from the back of the boat. 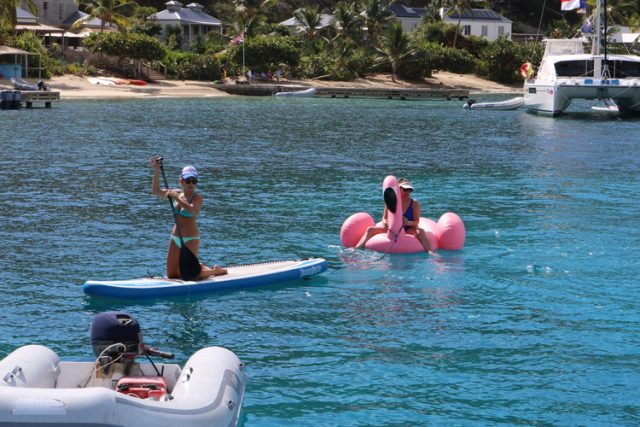 We said goodbye to Salt in the early morning and made our way to Cooper Island, just a few minutes away by boat. We spent the entire day and night at Cooper, the longest we spent in any single location during our trip. We opted for lunch on board, but spent the day paddle boarding around (mom paddle boarded for her first time at Cooper!), swimming with sea turtles, walking around Cooper Island to explore their shop and bar, and soaking up the sun on board. With a little generator mishap on our boat, we were unable to cook on board after the early afternoon (Virgin Motor Yachts was great about dealing with this issue quickly and helping us find a solution for our final night on the boat). We ate dinner at Cooper Island Resort, and spent our final night stargazing during one of the clearest nights of our trip.

For our final morning aboard the yacht, we had our morning coffee at Cooper Island and spent a couple of early hours taking in our surroundings before setting off for Tortola. Our charter was scheduled to end at noon, but we also wanted to allocate time to refill gas and water which takes longer than you may imagine (give yourself at at least 45 minutes). We were in Tortola with a rental car by the early afternoon, and spent our last day exploring more of Tortola with a pitstop at Smuggler’s Cove (an adventure to find). Had we been prepared with a picnic lunch we would have probably spent the afternoon there, but instead headed to Quito’s on famous Cane Garden Bay for a bite, followed by dinner at Bananakeets where the sunset view is said to be one of the best on the island.

{Overnight on land on Tortola.}

Check out a quickie minute-long video of our journey:

Going in, I wasn’t entirely sure how much time was reasonable to dedicate to each destination but the totally unhelpful answer is that it depends. It depends on your preferences and it depends on your travel style. If you’re more focused on exceptional on-island eating, then an overnight at Salt Island would probably not be a good fit for you. On the flip side, if you’re looking for peaceful, off the beaten path spots, your captain can help find little coves where you can spend the evening grilling on board and taking in peaceful evenings. It also depends on what kind of boat you’re using on your island hopping adventure. On a power boat, we were able to zip around relatively quickly and went against the grain with our clockwise itinerary. If you’re sailing, you’ll likely want to go the other direction, starting on the south side of Tortola working your way towards Virgin Gorda and then around the north side. The best part of it? You really can’t go wrong. Each island brings its own flair (you can read my recap of many of the smaller islands here) and a beautiful change of scenery that will keep excitement up for your entire journey through the BVI.

Have you explored the British Virgin Islands by boat? How was your itinerary different?

COVAC Insurance: Getting Home if You Test Positive for COVID